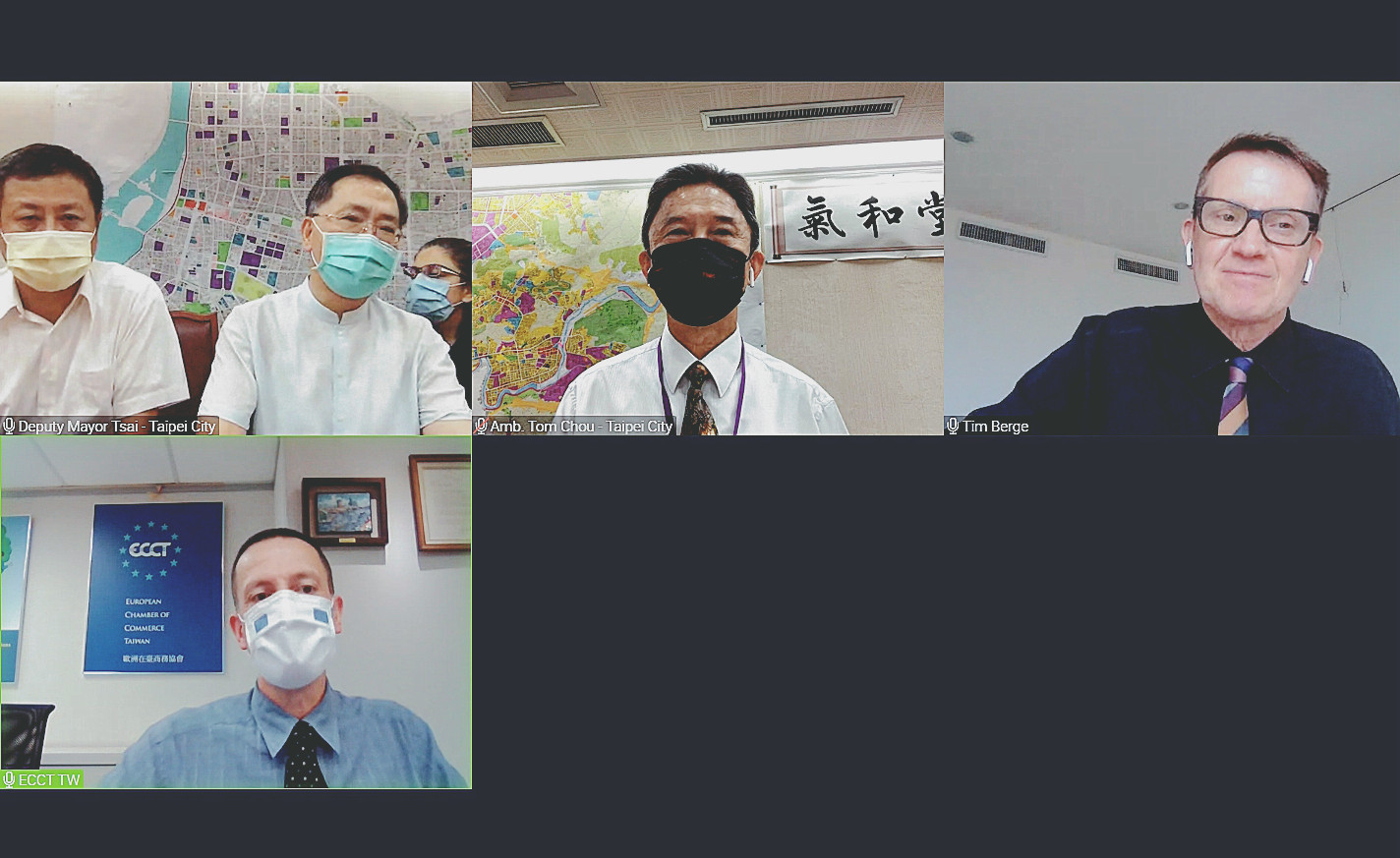 The ECCT, in conjunction with ICRT, hosted a briefing by the Taipei City Government on the latest Covid-19 situation in Taipei. The event, moderated by Tim Berge, Co-chair of the ECCT’s Better Living committee, featured Dr Tsai Ping-kun, Deputy Mayor of the Taipei City Government, Tom Chou, the city’s Commissioner for International Affairs and Dr Syu Jia-jhen, Deputy Superintendent of Taipei City Hospital. During the webinar, guest speakers gave a thorough briefing on the current Covid-19 situation in Taipei City, policies and measures affecting businesses and answered questions from the moderator and posted by ECCT members participating in the webinar.

In his opening remarks Commission Chou said that he is translating information about the pandemic into English on a daily basis, which is posted on the city government’s website here.

On the subject of quarantine hotels, officials said that over 100 hotels with over 7,400 rooms have been designated as official quarantine hotels and the city is continuing to work to increase capacity. The hotels all have professional medical staff available.

On a question of cooperation with the central government, the city is working closely with national authorities on all aspects of the pandemic. This includes options to divert patients from hospitals in northern Taiwan to other cities, although this would only be considered for patients who are not in serious condition.

Taipei Mayor Ko has stressed that vaccines will be essential to dealing with the situation. Given concerns that there will not be enough vaccine supply for the entire population, it is possible that the government might decide to prioritise giving all people a single dose of the vaccine first before starting to give second shots.

On a question about rapid testing stations, the city has set up three such stations in the hardest hit areas while 20 designated hospitals are able to process tests. The city currently has a capacity of 1,026 beds for Covid patients, which will be expanded by several hundred over the next few weeks. Previously hospitals were restricted to allowing only one Covid patient per room but if this is relaxed it would allow the city to double capacity. The city is also coordinating transport between locations for patients.

As to the distribution of vaccines, the city is following CECC priority guidelines for deciding priority according to the CECC’s list of 10 categories, which start with medical personnel and police. All staff working in quarantine hotels are also on the priority list to ensure their safety. They are also given extra subsidies. A lot of retired nursing staff have been asked to return to work to handle an increase in patients recently.

Regarding hospitals being pushed to the limit, priority is being given to serious cases while patients with moderate symptoms are being asked to recover at home.

On questions about the side effects of the vaccines, the deputy mayor said that every vaccine has some side effects but now that much more information is available, most people accept the risk of side-effects and acknowledge that vaccines are the only solution to ending the pandemic.

On a question about people travelling overseas who need a negative test within 48 hours, while capacity is still limited, it is being increased and a rapid test for travelling will be introduced soon.

On a question about working from home, the Taipei City Government is encouraging its staff to work from home. About one third is doing so and most businesses are following suit.

On the subject of the efficacy of vaccines, Deputy Mayor Tsai said that just one dose of the AstraZeneca vaccine already provides significant protection against getting a serious case which requires hospitalisation and that this should be reassuring. Regardless of which vaccine you take, your immunity will be boosted and will prevent the need for hospitalisation, he said.

On a question of financial support, the central government as well as the Taipei City Government plan to announce bail-out programmes this afternoon. This will include support for education, arts and cultural industries. Taipei City’s programme, which will run from May until July, will include delayed payment of tax and rents, tax relief, subsidies and financing assistance.

While officials expressed the hope that the epidemic threat level will not be raised to the highest level (Level 4), they are nevertheless preparing for this eventuality should it occur. If Level 4 is implemented, only industries essential to maintaining life will be allowed to remain open. Officials cited examples of services such as water, electricity and daily essentials but hinted that it is not clear if the central government may decide that sectors like the semiconductor industry would also be designated as essential and allowed to continue to operate.

On a question about allowing citizens to exercise, Mayor Ko has reminded people not to hold indoor gatherings of more than five people. Going for a run or hike should be okay but this becomes a problem when people flock to popular spots in large numbers. This is why municipal authorities have resorted to closing down popular tourist hotspots and hiking trails and encouraged people to stay at home unless they really need to go out. Deputy Mayor Tsai said that it is possible to do many types of exercise at home and suggested that people start a proper daily exercise regime at home.

Webinar with Swiss Re

Webinar with the BOE