The ECCT's Low Carbon Initiative was a co-organiser of the 2022 Sustainable City Forum. As one of the major annual events of the Smart City Summit & Expo (SCSE), the forum, which has been held annually since 2017, was organised by the Taoyuan City Government together with the International Climate Development Institution (ICDI, 國際氣候發展智庫) and fellow co-organiser, ICLEI – Local Governments for Sustainability (地方政府永續發展理事會).

With an aim to achieve the UN's Sustainable Development Goal (SDG) # 11 (Making cities sustainable), the event brought together global leaders and experts to share innovative technologies and solutions. The theme of this year's conference was "Voluntary Local Reviews and Eco-Logistics for Sustainable Recovery". At the event, opening remarks were made by Taoyuan Mayor Cheng Wen-tsan; Gino van Begin, Secretary General of ICLEI; Yasuo Takahashi, Executive Director of IGES and Jung Sook Park, Secretary-General of WeGO. This was followed by keynote speeches and panel discussions on topics related to the main theme.

The event was also the forum to launch a new Global Smart Solutions Report (GSSR) report titled "Green Investment and Innovative Technology", published by ICDI and the ICLEI Kaohsiung Capacity Center (ICLEI KCC), which included contributions from a number of city governments in Asia as well as two ECCT members: Air Liquide, and Nestle. At a VIP dinner held immediately after the forum, awards were presented to the companies contributing to the report by Taoyuan Mayor Cheng. ECCT Vice Chairman Giuseppe Izzo made opening remarks at the dinner.

In his recorded opening remarks, ICLEI Secretary General Gino Van Begin, said that climate change is escalating, and we need to take action to address the crisis. The good news is that we have accumulated knowledge and have a number of tools to help, including by local governments. He emphasised that it is important that sustainability is built into Covid-19 recovery plans.

Following his opening remarks, Van Begin introduced a new tool to measure eco-logistics indicators, noted that Taoyuan has produced the first report using the indicators. The indicators are classified into three categories: Environmental Sustainability, Social Equity and Operational Efficiency and include 34 quantitative and qualitative indicators for evaluating the status of urban eco-logistics.

Speaking via video conference, the speaker gave an overview of what CityNet is doing. He noted that the impact of the Covid-19 pandemic had been especially serious in developing countries and has disrupted efforts to meet SDG goals in their cities, especially in densely populated cities where the virus spread rapidly, and many people work in the informal sector in poor conditions.

ICLEI set up an SDG platform to help cities to do voluntary local reviews (VLR) of their SDG performance that enabled a lot of data to be collected and displayed in a user-friendly format. Taoyuan was one of the first cities to conduct a VLR and share the results. This has benefitted other cities by sharing best practices to help them to learn from successful cases. These best practices include how cities have dealt with the pandemic.

The speaker said that the concept of sustainability is affected by our understanding and appreciation of the fact that many things are unpredictable. This is a valuable lesson for the future. He added that pandemics affect poor people disproportionately as they lose their jobs and income. However, with the pandemic, awareness of personal hygiene has increased, and we have learnt that minimal precautions can make us safer. In addition, data transparency has improved, and we have learnt how it can be used in a much more productive way. The pandemic also highlighted the importance of having good social welfare systems in place. It also encouraged the breaking down of departmental silos and greater cooperation.

In her recorded presentation, the speaker spoke about how a lack of investments in urban infrastructure exposes people to rising risks from pollution and climate change. EBRD is investing in solutions to improve infrastructure and low carbon holistic solutions. She reported that 53 cities are involved in EBRD's green cities programme, aimed at helping cities invest in green infrastructure. She said that since 2016 €5 billion in finance from various donors (including Taiwan) has supported 64 projects in multiple countries. In Tbilisi, Georgia, for example, the action plan now being implemented includes building parks and replacing old buses with low emission version. In Warsaw, Poland, EBRD has financed metro trains. The Green Cities programme has also invested in water treatment, waste treatment, green buildings and renewable energy projects.

In his presentation, Lu Li-the spoke about creating sustainable logistics. Taoyuan has around 1,800 logistics companies, which are already taking action by switching to low carbon delivery and other service vehicles. This will begin with replacing trucks with low carbon ICE vehicles and later with EVs and hydrogen-powered vehicles, although hydrogen will take longer because it will require installing a hydrogen storage network system. In addition, initiatives will be adopted to reduce the use of waste packaging with the target to eventually achieve zero waste packaging.

Roland Rudolfer said that Austria has had strict environmental legislation and enforcement since the 1970s, starting with air filtering systems for coal power plants, waste management and water management using advanced systems. Austria has exceptionally clean water, including its lakes and rivers, and is one of the few countries where people can drink water straight from the taps. Austria phased out nuclear power early in favour of hydro and other renewables and also has very good air quality.

The country's approach to waste management approach is first to reduce it at source. For example, single use plastic bags have been banned since 2020 and the purchase of plastic bottles and aluminium cans requires a deposit, which is refundable when recycled.

85% of Austria's energy comes from renewables, mostly hydro power (but also biomass). According to local law, trees that are cut down have to be replaced, which means that the number of trees is actually increasing. Austria has set a target date for climate neutrality by 2040, ahead of most other countries.

The city of Vienna designed an incinerator, located in the middle of the city, to look like an art installation. This has helped to increase public acceptance. The country's hydro power plant in Graz was built despite some public opposition. However, people have now accepted it because the facility also provided a public park and nature reserve on the site for people to enjoy.

Pedestrianisation of the city of Vienna makes the city safer while public transport is very cheap, which encourages use. Most produce in Austria is organic. Only free-range chickens are allowed, for example.

In the Q&A, Rudolfer spoke about how waste is sorted and collected in Austria. Given successful efforts to reduce waste at the source, refuse now only needs to be collected once every two weeks, compared to twice a week in the past. Organic waste is collected and processed to produce rich soil for farming and gardening.

In his presentation, Kevin Liu spoke about scaling up hydrogen in Scotland as part of its efforts to reach net zero by 2045 (five years ahead of the UK overall). He said that Scotland has been exploring hydrogen for 20 years and that hydrogen will play important role in Scotland's decarbonisation. The country is starting by producing blue hydrogen (using natural gas to split water) and carbon caption and storage to deal with the emissions from the process. The carbon emissions are pumped into depleted gas fields deep under the ocean bed of the North Sea.

According to the speaker, Scotland already gets most of its electricity from wind energy and the country will soon have surplus green energy, which it will use to produce green hydrogen in the near future. It has a target of 5GW of renewable and low carbon energy by 2030. Green hydrogen will be produced from offshore wind and other excess green energy. Hydrogen will be used for heavy duty vehicles, heating and eventually, surplus supplies will be exported. It will also capture oxygen for use in hospitals.

85% of UK households use natural gas for heat. Eventually, the aim is to replace gas with green hydrogen, but this will first require large investments in storage and distribution networks.

Speaking via video conference, Martin Tzou said that Air Liquide is investing in existing business lines as well as green hydrogen, although Taiwan is not yet ready for green hydrogen. He noted the use of hydrogen vehicles in the Tokyo Olympic Games where all transport of athletes was done using hydrogen fuel cell vehicles. Hydrogen taxis have also been running in Paris since 2016. There were 600 hydrogen taxis at the end of 2020. The 2024 Olympic Games in Paris will also use hydrogen fuel cell vehicles. Technology is already available for small hydrogen vehicles and is being developed for planes and ships.

In his recorded remarks, Christophe Ferrari shared some sustainable solutions from Grenoble, which holds the title of European Green Capital. He noted that Grenoble has reduced emissions by 17%, upgraded buildings, reduced waste, and promotes local agricultural produce, among other initiatives.

Pascal Viaud highlighted some examples of Grenoble's green credentials. In 2022, 100% of Grenoble's energy consumed by residents will be generated by renewables, mainly from hydroelectricity.

The city's Autonomous Building for Citizens (ABC) project boasts buildings that are 70% energy self-sufficient (thanks to solar panels) and also have wastewater treatment and rainwater treatment facilities.

Biomax is a cogeneration plant that produces heat that is 92% powered by waste wood chips and the rest from sustainable forests nearby.

Grenoble is the main hub in Europe for new energy with a strong competency in smart grid and energy storage. Hydrogen filling stations are made in Grenoble as are charging stations thanks to leading companies operating in the city. For example, Verkor, a start-up created two years ago is working on battery storage and building a giga factory.

In recorded remarks, Abigail Binay, Mayor of Makati in The Philippines shared some public private partnership initiatives including a citizen card, which is used to distribute money to citizens and an app to keep citizens updated on programmes, events and activities in the city.

In her presentation, Wu Chun-Ting, Chairperson of Taoyuan's Research & Evaluation Commission introduced Taoyuan's Voluntary Local Review and connection with other cities. The city finished the first edition of its VLR report in April 2021. The extensive report lists 288 policies related to SDGs and reports on Taoyuan's progress towards meeting SDGs to date.

The forum ended with closing remarks by Chiou Jiunn-ming. This was followed by VIP dinner, attended by Mayor Cheng, the speakers and moderator. 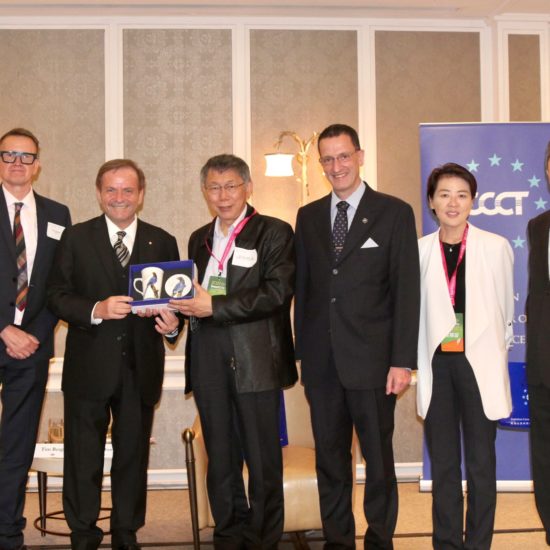