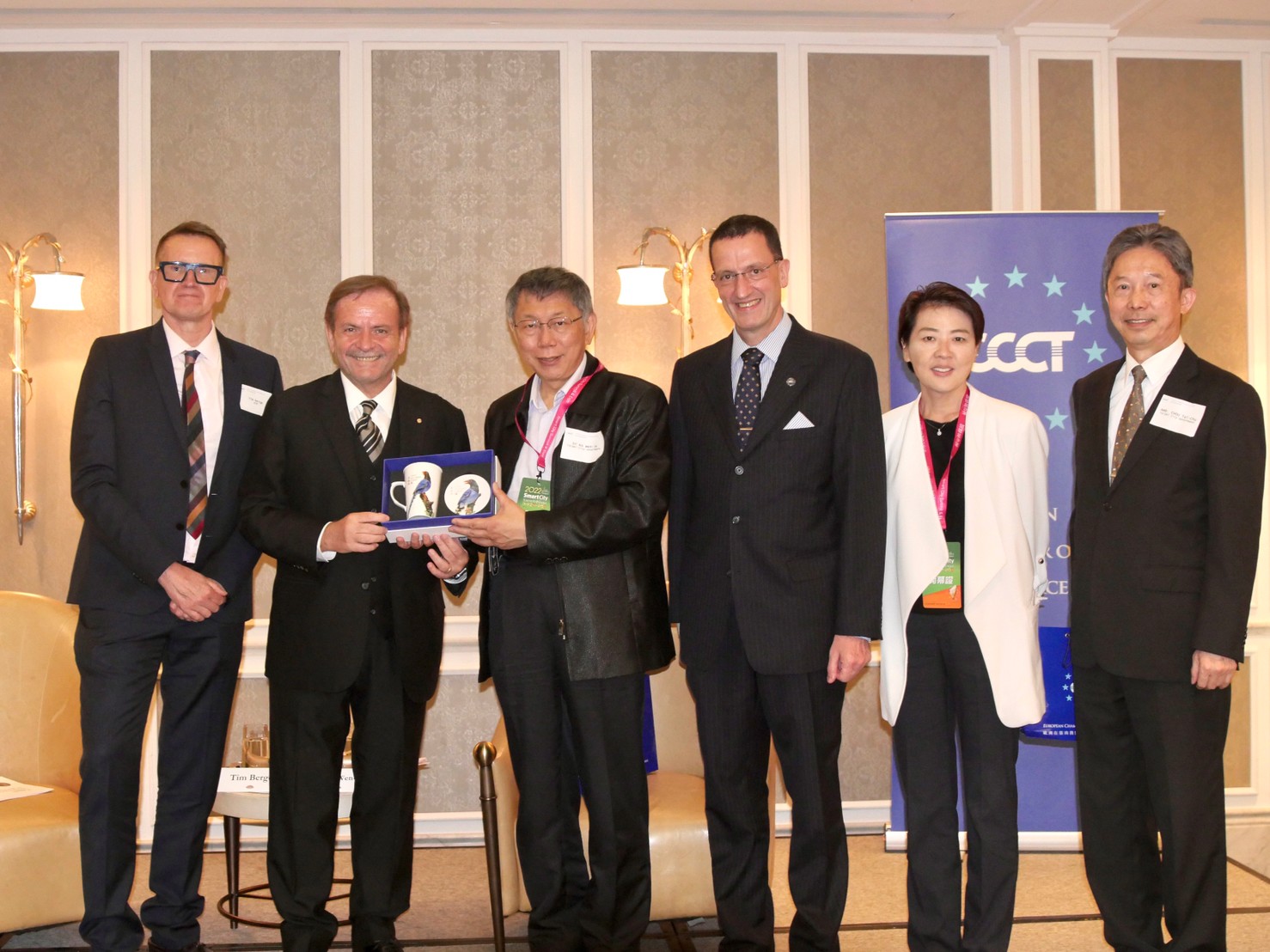 The ECCT arranged a Premium Event lunch with Taipei Mayor Ko Wen-Je (柯市長) and senior officials from the Taipei City Government (TCG). At the event, Mayor Ko gave a short speech after which Ambassador Tom Chou (Tai-Chu, 周台竹大使), Commissioner of the Mayor’s Office for External Affairs gave a presentation. This was followed with a Q&A session with Mayor Ko, moderated by Tim Berge, Co-chair of the ECCT’s Better Living committee.

This year’s lunch marked the 24th year since the ECCT held its first round table lunch with the TCG. As in previous years, senior officials from various city government departments were in attendance and seated at different tables in the venue in order to allow ECCT members to discuss issues of concern or mutual interest with them.

In his speech, Mayor Ko highlighted some of the city’s current areas of focus that were later elaborated upon in Ambassador Chou’s presentation, including the city’s plans for digital transformation and to reach net zero greenhouse gas emissions by 2050.

In his presentation, Ambassador Chou noted that 147 of the world’s top 500 companies have offices in Taipei. He cited figures showing Taiwan’s outperformance economically over the past two years, despite the pandemic, and some of the reasons why Taipei remains an attractive investment destination. This includes the entry to the job market of 60,000 new university graduates every year, the city’s 100% internet fibre-optic coverage rate, the close proximity of industry clusters (especially the Nangang Software Park and the Neihu Science Park) and two major exhibition centres.

According to Chou, Taipei already has 15 incubation centres for start-ups with another eight under development. The city’s Invest Taipei Office (ito), which provides a single contact window for investment and consulting services to help companies to set up businesses, has reportedly had 160 successful cases and attracted €693 million in investments.

In terms of the city’s net zero plans, Ambassador Chou noted that 74.6% of the city’s direct emissions come from buildings while 20.58% are from transport. For these reasons, most of the city’s focus will be on creating zero carbon buildings and green transport. According to Chou, the city will “renew” 3% of buildings every year and fully transition to electric buses by 2030 (400 electric buses will be on the roads of Taipei in 2022 and all 3,500 of the city’s buses will be electric by 2030. The transition will kick off in 2022 as the city will only purchase electric buses to replace diesel ones from now onwards). The ambassador reported that the city will complete its first circular building this year. The circular social housing project in Nangang, which comprises 1,442 apartment units, will be made from reusable building materials, meaning that when the building is eventually demolished, the materials will be able to be re-used.

In terms of transport, the Taipei metro (MRT) now has 131 stations across six lines and is used by two million people daily. Taipei’s second generation bicycle sharing system (YouBike 2.0) has 13.240 bicycles for rent across 1,200 sites and each bike is used around six times per day. Chou noted that better public transport had led to a reduction in motorcycles and scooters in the city from over 1.1 million in 2011 to under 950,000 2021.

In the Q&A session, on a question about foreign residents being excluded from the city’s long-term care programme, Mayor Ko expressed the view that, as a matter of fairness, permanent foreign residents should be eligible for the same treatment as citizens.

On a question about the persistent traffic congestion in the Neihu district, the mayor said that this was a long-standing problem that has occurred due to a lack of transportation infrastructure planning in the past that was not sufficient to meet the needs of a rising population and industry development in the area. He said that the city is doing what it can to prevent the problem from getting worse and that the eventual construction of the circular MRT line would help to relieve some of the traffic congestion.

On a question about electric vehicle charging infrastructure, the mayor said the city’s priority is building charging for e-buses, followed by charging in public parking garages. He added that it will be mandatory to build charging facilities in new buildings, although not in existing buildings.

On the subject of Covid restrictions, the mayor expressed the view that borders cannot remain closed indefinitely and that sooner or later Taiwan will have to remove the remaining border restrictions.