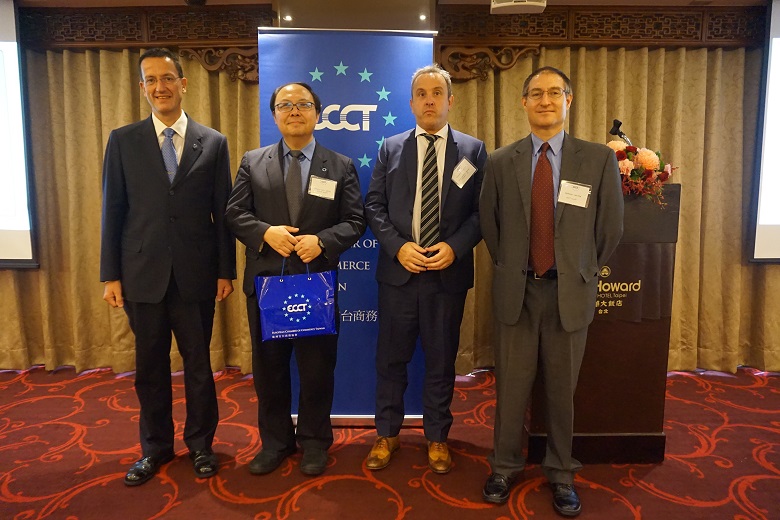 The ECCT's Planet-Friendly Eating and Living (PEL) Platform hosted a lunch on the topic "Tackling the global obesity and diabetes epidemic - The latest medical innovations and advice on diet and lifestyle habits" featuring guest speaker Professor Wang Chih-yuan, Attending Physician from the Department of Internal Medicine at National Taiwan University Hospital. The speaker gave an overview of global and local trends, medical innovations, the main risk factors for type 2 diabetes and offered lifestyle advice on how to limit the chances of getting type 2 diabetes.

Dr Wang noted that having a high body mass index (BMI) was less important than “central obesity” or belly fat. He made the point that even active people may have relatively high BMIs but have a lower risk of developing type 2 diabetes if their central body fat levels are low.

A study Dr Wang participated in showed rising prevalence of diabetes on the back of rising obesity, indicating the need for measures to control body weight. Diabetes is associated with a significant loss of life. According to research cited by Wang, on average, a 50-year-old individual with diabetes and no history of vascular disease will die six years earlier compared to someone without diabetes.

It makes sense to focus attention on controlling body weight because obesity is the root cause of not only diabetes but also cardiovascular and other diseases. Several studies conducted in various countries cited by Wang showed that a combination of a healthy diet and regular exercise can significantly lower the risk of diabetes developing.

However, a small weight loss alone may not be sufficient for long-time sufferers of diabetes, which is why it is important to change unhealthy behaviour early in life. According to Wang, modern teenagers are at risk due to their poor diets and sedentary lifestyles (lack of exercise). To avoid diabetes developing, it is therefore important to change these behaviours before teenagers become adults.

Sugar-sweetened beverages including soft drinks, fruit drinks, and energy drinks that are sweetened by high fructose corn syrup or sucrose, are the greatest source of fructose-containing sugars in the diet and thus account for the majority of total fructose intake, which raise glucose levels, promote weight gain and could increase insulin resistance and the chances of developing cardiovascular disease and/or diabetes.

Professor Wang’s own research found an association between non-alcoholic fatty pancreatic disease (NAFPD) and metabolic syndrome and cardiovascular disease. A fatty liver, fatty pancreas, fat in muscle, visceral fat and cardiac fat can increase insulin resistance and, according to Wang’s study, there was a much high incidence of diabetes in patients with a fatty pancreas.

Besides avoiding added sugar, according to Wang, the best diet to prevent obesity should be low in carbohydrates, high in fibre and mostly whole food and plant-based (rich in whole grains, fruit and vegetables). According to Wang there is no consensus on the ideal percentage of daily calories that should come from carbohydrates, protein and fat but he recommended at least 14 grams per 1,000 kilocalories of fibre per day (from fruit and vegetables). According to Wang’s definition of a “low” carbohydrate diet, this means that carbohydrates should account for less than 40% of daily calorie intake. In addition to reducing sugar intake, the ideal diet is also low in salt, since too much sodium is also unhealthy.

Exercise is also important to maintaining health and reducing obesity. According to Wang, the amount of exercise needed depends on the level of physical activity of a person’s job and daily life, one’s age and physical condition. On average, those with a sedentary job (like most office workers), should do between half an hour and an hour’s exercise every day while those with jobs involving standing or more physical activity would not need as much exercise. Wang cautioned that excessive irregular exercise could be dangerous, especially for those with heart conditions. A safer option is regular, moderate exercise.

On a question in the Q&A session as to what was more important, diet or exercise, Dr Wang said that both were important to maintaining health but that exercise alone cannot offset all the damage resulting from a poor diet, meaning that eating a healthy diet was the most important thing.