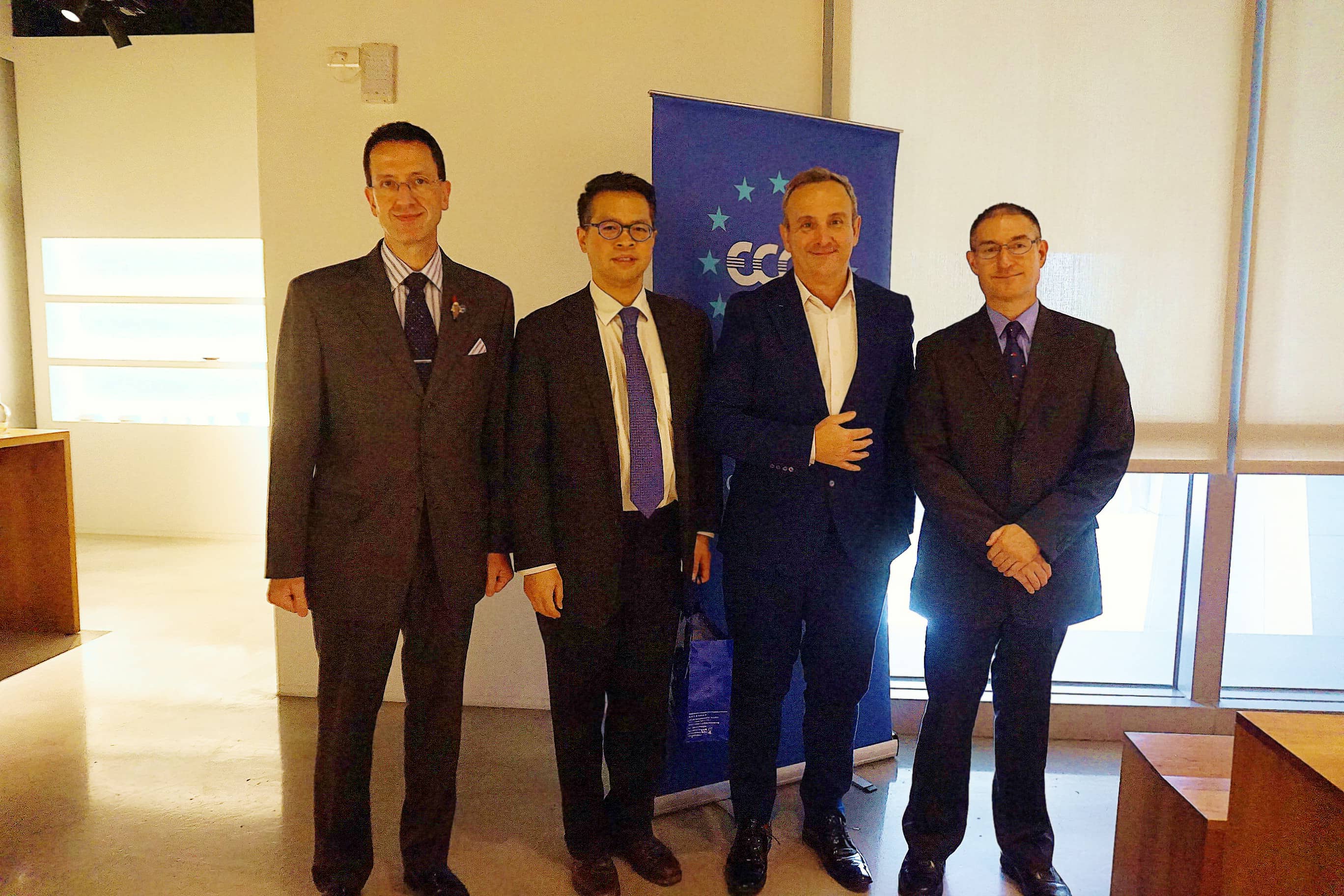 The ECCT's Planet-Friendly Eating & Living (PEL) Platform hosted a lunch on the topic "Medical innovations and insights on obesity - Advice on diet, lifestyle and the science of sleep".

The event, held at the Xuexue Food Laboratory, featured a speech by guest speaker Dr Jeffrey T Liu (Cai-rui), physician and expert in weight management, neurology, the body's nervous system and sleeping disorders. To match the theme of the event and the mission of the PEL platform, the menu featured low calorie and nutritious dishes using plant-based ingredients.

The lunch was preceded by a cooking class specifically designed for weight control, arranged by Novo Nordisk Taiwan. Ahead of the main presentation at the lunch Novo Nordisk General Manager Steve Profit gave a short summary of the class, which was attended by around 20 people, of various ages and walks of life, including some celebrity bloggers. The class began with an introduction to a healthy diet and tips for weight control by dietician Charlotte Chen. This was followed by a cooking demonstration by a professional chef from Pierrot Bistro and a hands-on cooking experience for all the participants.

In his remarks at the lunch Steve Profit cited statistics from the Health Promotion Administration (HPA), under the Ministry of Health and Welfare, that estimated that 48% of adults in Taiwan were overweight (with a body mass index (BMI) of over 25), of which one fifth met the definition of obese (a BMI over 30), while a growing number of children are obese. This has serious implications because obesity increases the risk of cardiovascular disease, dyslipidemia, high blood pressure, diabetes, kidney and liver diseases, among others. He explained that the purpose of the class was to raise awareness about good nutrition with a view towards helping the students to get into the habit of making healthy food choices.

In his presentation, Dr Jeffrey Liu gave some in-depth insights into obesity that went beyond eating less and moving more. He began by noting that the traditional standard measure of obesity using BMI should only serve as a rough guide because the real measure of obesity is not body weight but the proportion of body fat.

He went on to say that obesity is more than just a simple matter of calorie consumption from food minus calories used for energy. Since obesity meets the common criteria of a disease, including an impairment of the normal functioning of some aspect of the body, characteristic signs or symptoms and harm or morbidity, the American Medical Association and other bodies have recognised obesity as a disease. Others, such as Taiwan's healthcare authorities, do not recognise it as a disease but only as a condition caused by abnormal behaviour.

The medical complications of obesity are complex and may be a combination of metabolic, mechanical and mental issues, many of which do not show up in standard medical test results. Metabolic complications include cancers, type 2 diabetes, asthma, gallstones and infertility but mechanical impairments such as back pain, incontinence and sleep apnoea may not be attributed to obesity even though it may be the direct cause. Then of course many patients suffer mental health issues such as depression and anxiety as a direct result of being obese.

The main causes of obesity may be well known, namely poor lifestyle and food choices, but less well known is the effect of stress, sleep disorders and medications.

According to Chen the modern environment causes obesity by driving up the defended fat mass. Certain foods, such as simple carbohydrates, are easier to digest than others like proteins and there is a complex physiological process that takes place when eating and digesting food, involving the brain and the secretion of hormones, which makes people want to eat more. A lot of medications also make people want to eat more. It is also very difficult for women who have just given birth or who are menopausal to lose weight because they are conditioned to consume more calories. Stress also causes a desire to store more energy. Most diets aimed at reducing calorie intake only achieve initial success because they fail to address the underlying causes of obesity.

While treatment guidelines vary according to the particular patient, the first step is to assess diet and lifestyle. Switching to a healthy diet, reducing stress, getting regular exercise and good quality sleep is the most fundamental. For more serious cases, medications may be prescribed and, in extreme cases, surgery may be recommended. Dr Chen stressed the importance of giving patients long-term therapy and support. He concluded with some examples of his own patients who had achieved success. For example, one patient went from weighing 158kgs to just 78kgs in less than four years while another dropped from 115kgs to 65kgs, thanks to effective weight management treatment.

Premium Event with the Minister of Labour