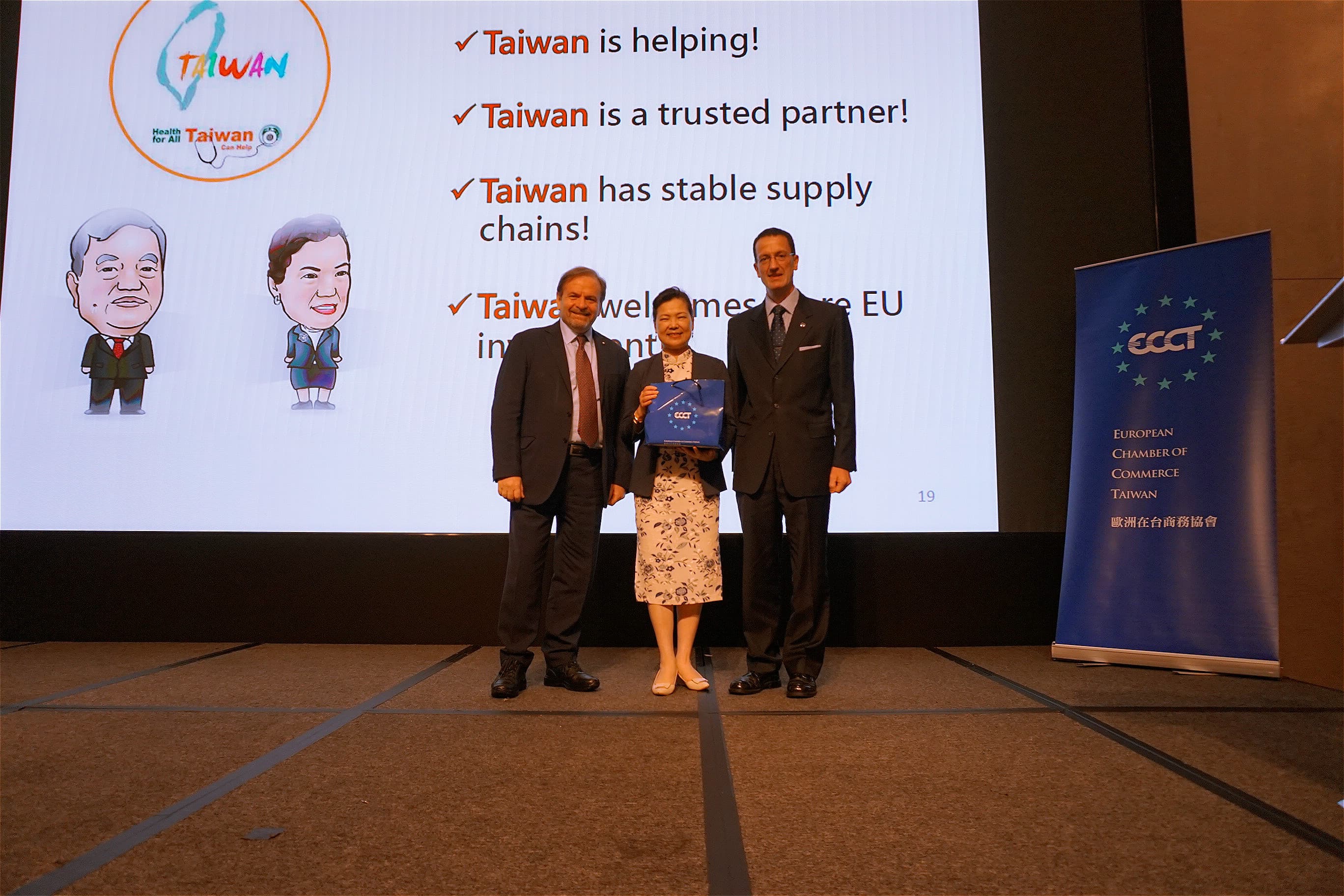 The ECCT hosted a Premium Event lunch with Wang Mei-hua, Deputy Minister of the Ministry of Economic Affairs (MOEA). In her presentation, Deputy Minister Wang spoke about some of the MOEA's economic stimulus and support measures for business in response to the coronavirus pandemic.

She began by talking about the government's rapid response and actions to deal with the shortage of surgical masks. Given low demand for many years, at the time the pandemic struck, Taiwan's domestic mask suppliers were limited in number and production capacity to about 2.7 million masks per day. Given surging demand at the start of the outbreak, the government immediately banned the export of masks, implemented a mandatory rationing scheme and coordinated a national team of government and industry players to ramp up production as fast as possible. Thanks to these efforts, whereby machinery makers were mobilised to manufacture mask-making machines, within 10 days daily production had almost tripled and, by 24 May, capacity had reached 19.87 million units per day. Since this is sufficient to meet local needs, the MOEA will lift the ban on exports on 1 June, allowing manufacturers to export excess supply.

The Deputy Minister noted that Taiwanese producers have earned a well-deserved reputation for the quality of their three-layered masks, which have been donned by a number of famous people in the United States, including the US president's senior advisor, Jared Kushner. This has become another visible example of Taiwan's soft power diplomacy as, following Wang's own suggestion, the masks are all labelled as "Made in Taiwan". Aiding these soft power efforts, Taiwan has already donated 43 masks to various countries and Taiwan residents can now give up their own weekly rations of masks so that they may also be donated to those in need.

Besides surgical masks, Wang said that Taiwan has also increased its local production of N95 masks and other personal protective equipment (PPE) for healthcare workers such as gowns, all of which meet both US and EU quality standards.

While Taiwan does not yet produce ventilators, local producers are cooperating with overseas partners and have produced prototypes. A number of local research institutes and companies are working on vaccines and rapid testing kits. Some of the testing kits are pending approval, after which mass production can commence.

Wang went on to talk about some of the support measures put in place by the government.

At the end of her presentation, Deputy Minister Wang announced that on 7 June 2020 Taiwan authorities will remove the remaining restrictions now in place on the maximum number of participants that may attend art, culture, dining and other recreational activities. Provided that there are no further incidents before then, 7 June would mark the 56th consecutive day without locally-transmitted cases of the coronavirus. That would be equivalent to four times the assumed length of the virus's maximum 14-day incubation period and, by the government's analysis, about as safe as can be given the pandemic situation globally. Assuming things go smoothly, by lifting the last remaining restrictions on the holding of large gatherings, Taiwan would be in the enviable position of having reverted to as close to normal as possible.