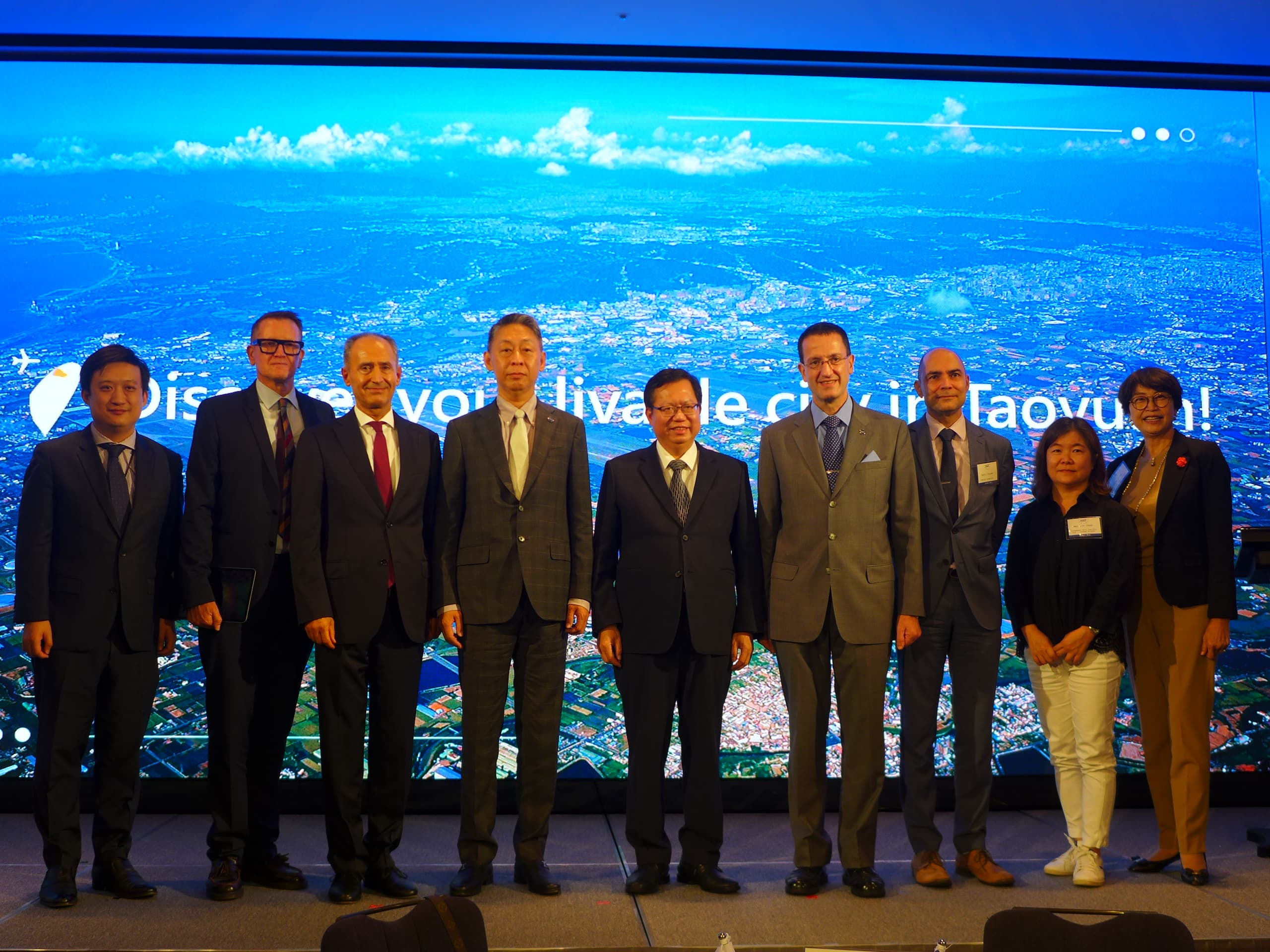 Taoyuan has a young population and a dynamic environment that continues to attract investment and talent. It has also been very successful at dealing with the coronavirus pandemic. This is according to Taoyuan Mayor Cheng Wen-tsan (鄭文燦), speaking at a Premium Event lunch hosted by the ECCT.

Besides Mayor Cheng, the lunch was attended by senior government officials from the Taoyuan City Government. The event was part of the ECCT’s ongoing efforts as a nationwide organisation to engage in joint activities with municipal governments across Taiwan to discuss economic development and promote business opportunities. Earlier this year, the ECCT’s Low Carbon Initiative (LCI) partnered with the Taoyuan City Government’s Eco-logistics Office to host a green transport and logistics forum and jointly hosted the Sustainable City Forum for the second consecutive year. At the lunch Mayor Cheng gave a presentation on business opportunities in Taoyuan and an update on the city’s Covid-19 situation. Afterwards, he answered questions from members in a Q&A session hosted by Tim Berge, Co-chair of the ECCT’s Better Living committee. The lunch was followed by a visit to Zuellig Pharma.

According to the mayor, the city has been effective in dealing with the coronavirus pandemic. He cited figures to back this up showing that the city had managed to keep Covid-19 cases low. In addition, the city has 56 vaccination sites and 200 hospitals to administer vaccines. To date, a total of 2.27 million vaccinations have been administered and by the end of October, 75% of residents would have received at least one shot and at least 30% of residents would be fully vaccinated, according to the mayor. The city also offers over 3,600 rooms in 27 quarantine hotels in addition to four designated quarantine hotels for air crew.

Taoyuan boasts one of Taiwan’s youngest populations (the average age is under 40) and is exceptional among cities in Taiwan in that its population continues to rise. According to Mayor Cheng, the population has expanded by 215,000 over the past few years despite Taiwan’s overall shrinking population. The mayor attributed this partly to affordable housing prices as well as a vibrant job market and economy.

In addition to strength in traditional ICT, aviation, and automotive parts manufacturing industries, the city offers an ideal environment for start-ups in new and emerging industries like eco-logistics, electric vehicles, green energy, IoT, smart healthcare and smart textiles. The Qingpu district, for example, is the demonstration site for Taiwan’s Asia Silicon Valley Project. As home to Gogoro, Taoyuan is the national leader in electric scooters and battery swapping stations. According to the mayor, 6% of scooters are electric and there are 1,361 charging or battery swapping stations in the city. Thanks to smart textiles, products made in Taoyuan have been used in the FIFA world cup and at the Wimbledon tennis tournament. In addition, most of the personal protective equipment that Taiwan sent to the world during the pandemic was made in Taoyuan.

Taoyuan is also a national leader in climate action and the energy transition. The city published its Voluntary Local Review (VLR) report in 2020 and established a city-level sustainable development commission in 2021. According to Cheng, Taoyuan also has the largest capacity of solar energy installed in northern Taiwan and the city has cut its emissions by 13.74% compared to before it was upgraded to a special municipality. The city is also investing in biogas power that uses biogas from wastewater treatment to generate power. It has also reduced by half the air pollution caused by power plant generators by installing nitrogen oxide control equipment and is working to replace coal-fired and oil-fired boilers with those powered by natural gas. In addition, the mayor said that the city is home to 50 companies involved in the wind energy industry supply chain.

Mayor Cheng went on to list some of the benefits of investing and living in Taoyuan. The city prides itself on its record of providing support to business and administrative efficiency. For example, business permits are processed in 10 days. The government also assists companies to recruit talent.

In the Q&A session, Tim Berge began by thanking the mayor for the city’s decision to grant senior citizen cards to permanent foreign residents, which gives them discounted access to public transport and other facilities.

On a question about Taoyuan city's bilingual nation efforts, Mayor Cheng reported that the city is promoting bilingual programmes in schools as well as exchange programmes with the United States and Canada and actively hiring more English teachers.

On a question about the Taoyuan Aerotropolis and airport upgrade plans, the mayor said that the new terminal and runway would increase passenger capacity from 48 million in 2019 to up to 82 million per year. However, he acknowledged that passenger volumes will depend on how the pandemic affects border reopening both in Taiwan and internationally. Citing IATA, he said that may take several years to recover to pre-pandemic levels and longer before growth is seen. In the meantime, Aerotropolis development plans are proceeding.

In terms of transport infrastructure, the mayor said progress was being made on extending the three lines of the city’s metro rail network as well as a new freeway, which will increase convenience and reduce commuting times between the city and Taipei.

On a question about green hydrogen, the mayor said that it has potential to play a role in Taiwan’s energy transformation. He also expressed support for greater use of onshore wind energy.