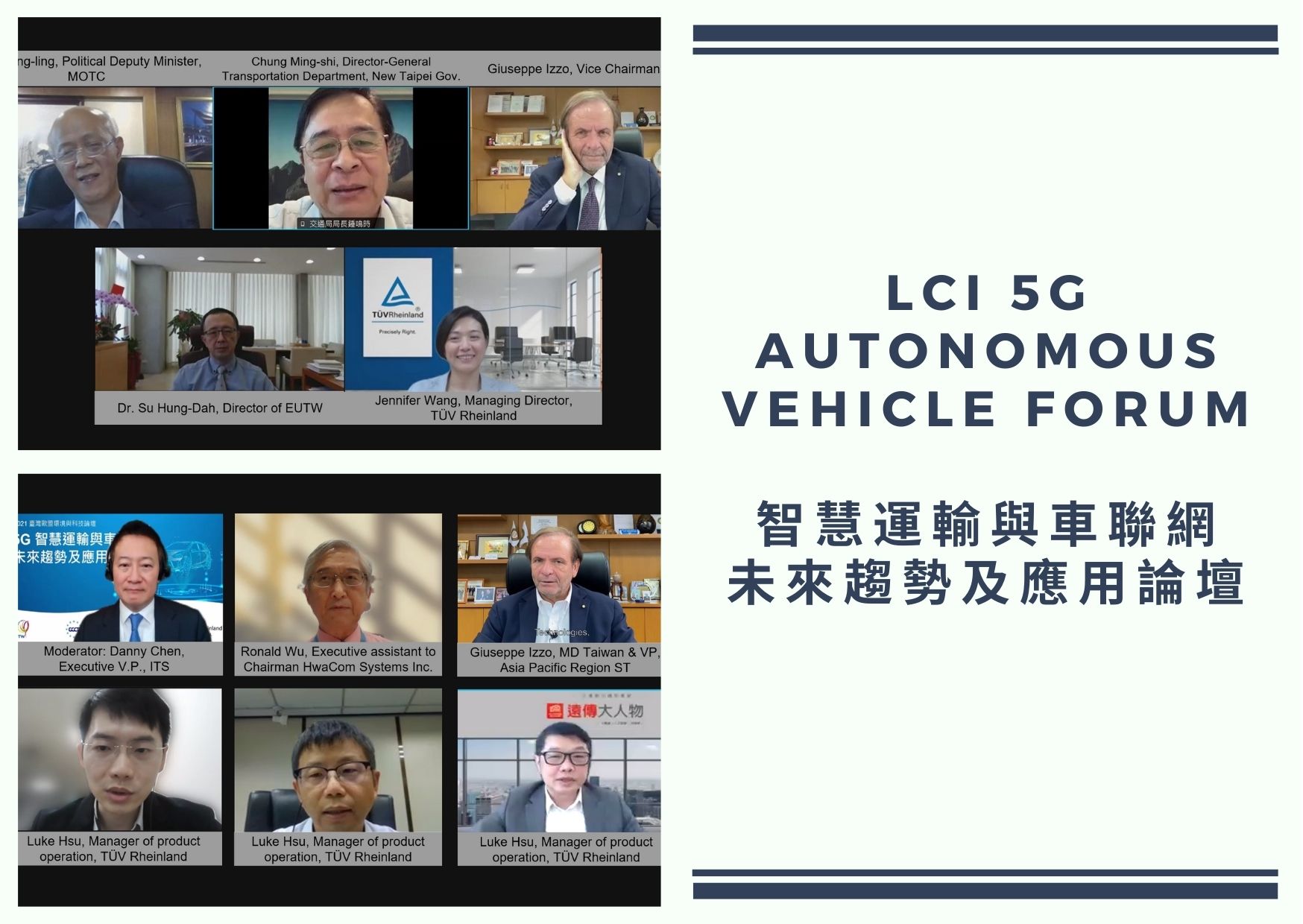 The ECCT’s Low Carbon Initiative was a co-organiser of the 5G Autonomous Vehicles & IOT Future Trends Forum (5G 智慧運輸與車聯網未來趨勢及應用論壇), together with TÜV Rheinland, the European Centre in Taiwan (EUTW), and the Ministry of Transportation and Communications. The event featured opening remarks by guests of honour and presentations on the latest developments and business opportunities in autonomous vehicles and the Internet of Things (IOT). Opening remarks were made by MOTC Deputy Political Minister Hu Hsiang-ling, Chung Ming-shi, Director-General of the Transportation Department of the New Taipei City Government, Dr Su Hung-dah, Director-General of EUTW, Jennifer Wang, Managing Director of TÜV Rheinland, and ECCT Vice Chairman Giuseppe Izzo.

In his presentation, Ronald Wu, Executive Assistant of Chairman HwaCom Systems, gave an introduction to smart transportation field trials. He spoke about how the pandemic had interrupted global supply chains, which has had an impact on the rollout of both traditional and electric vehicles, in a global market which had already shrunk in size in 2019 from the year before, and how the supply of electronic components is playing an increasingly important role in vehicles.

He went on to discuss the various phases towards autonomous driving and progress made to date. A number of players, under the guidance of the ARTC in Taiwan, have been developing autonomous buses for the past two years. He spoke about Danhai New Town as a testing ground for autonomous vehicles.

He concluded by stressing the importance of international standards and companies that provide accreditation and testing services to the future development of autonomous driving.

In his presentation, Giuseppe Izzo, speaking in his capacity as Managing Director & Vice President of STMicroelectronics Asia Pacific, gave an overview of smart transportation field applications and cases.

He cited examples of advances in technologies that are paving the way towards autonomous driving and some use cases. The car is already becoming something like a smart TV on wheels. The impact of 5G on autonomous vehicle development should begin next year and will drive the economics of the automotive industry.

Using existing technology could cut in half the number of accidents and this will only improve as technology advances. The speaker went on to introduce the types of communication nodes to connect vehicles and objects and 3GPP, the regulatory standards body.

In his presentation, Luke Hsu, Manager of Product Operations at TÜV Rheinland gave an outline of trends in development of global car networking standards and certifications.

V2V use cases rely on data exchanges between vehicles in a proximity area (within a direct communication range) while V2I provides infrastructure support to neighbouring vehicles.

He went on to introduce the various standards being developed for advanced autonomous driving use cases and some of the certification programmes in different countries. The V2X protocol standard certification has been developed by industry and there are a number of global connected vehicle standard and certification organisations, including IEEE and EURONCAP and, in Taiwan, the Taiwan Telematics Industry Association.

In his presentation, Dr Wu Quen-zong, Executive Vice President of Chunghwa Telecom, gave an introduction to innovative applications in smart transportation services and applications. He mentioned examples of cooperation between local and European companies and associated business opportunities.

Among other subjects in his presentation, Philip Tseng, Vice President of Far EasTone Telecom, spoke about the various technologies and standards needed for CV2X, including frequency bands being considered in different countries as well as the challenges that remain to be overcome.