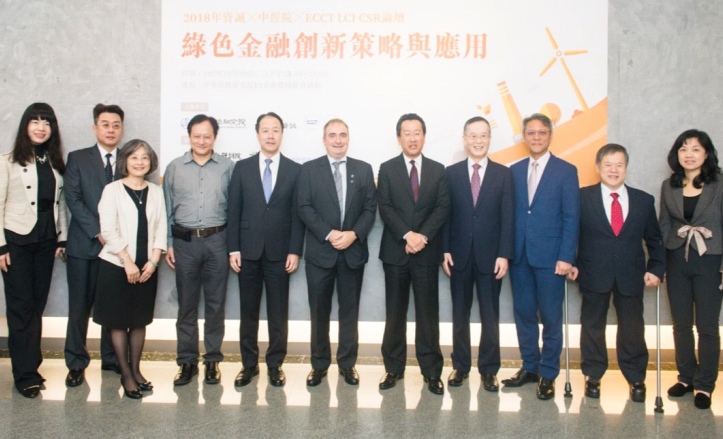 The event was organised by PWC together with the China Economic Research Institution (CIER) and the ECCT’s Low Carbon Initiative (LCI) and co-organised by the Taiwan Academy of Banking and Finance (TABF) and the Taiwan Institute for Sustainable Energy (TAISE). The event brought together experts in green finance and green energy to share experiences and discuss business opportunities in green financial innovation and the development of the green energy industry. At the event, opening remarks were made by Welling Koo, Chairman of the Financial Supervisory Commission (FSC), Wu Chung-shu, Chairman of the TABF, Chou Chien-hon, Chairman of PWC and ECCT Vice Chairman Olivier Rousselet. This was followed by several presentations on subjects related to international developments in green finance. The event ended with a panel discussion featuring the speakers.

In his opening remarks Vice Chairman Olivier Rousselet referred to a recently-released report by the UN Intergovernmental Panel on Climate Change (IPCC). According to the report, without drastic action before 2030, the goals of the Paris agreement to keep global temperature rises to between 1.5˚ and 2˚Celsius will not be met. In response, some scientists have said the report actually underestimates the potential runaway climate change impact if temperature rises above this limit. The vice chairman remarked that the report should serve as a wake-up call to all global leaders to take action. Here in Taiwan, he said that while the government is moving in the right direction by setting clear carbon reduction and renewable energy goals, things need to move a bit faster.

The two major enablers of renewable energy are the regulatory environment and finance. With the support of the FSC, Taiwan’s first large-scale offshore wind project financing and the build out process is moving ahead. However, Taiwan’s build out of renewable energy will be expensive and require a wider funding base than what is currently available. The current regulatory obstacles make it difficult or impossible for certain financial institutions, including foreign banks and Taiwanese insurance companies, to participate in renewable energy financing. That is why the ECCT is calling on authorities to allow foreign issuers to issue Taiwan dollar bonds for Taiwan’s renewable energy projects and to allow life insurance companies to extend loans for renewable energy projects guaranteed by European export credit agencies. On the regulatory front, there are still some problems to overcome. This includes the “Power Purchase Agreements” (PPA) between Taiwan Power Company and wind developers, overly aggressive localisation requirements and a lack of green energy market mechanisms.

In his keynote presentation, Eugene Chien, the chairman of TAISE, gave an overview of global developments in renewable energy. Among other subjects he spoke about the UN’s Sustainable Development Goals (SDGs), especially those related to addressing climate change, noting that SDG goals will not be met without drastic action. He pointed out that a lot of countries have already set aggressive targets for the electrification. For example, Norway is to switch to electric vehicles (EVs) by 2025 and the Netherlands by 2030 (the Taiwan government’s goal for EVs is 2040). However, the switch to EVs will not be effective unless vehicles are charged by renewable energy sources.

In addition, 128 countries already have power regulatory incentives or mandates in place while 70 have done so for the transport sector. However, only 29 countries so far have plans to reduce the energy demand attributed to heating and cooling. He also noted that many global corporations have already been aggressively switching to renewable energy sources for their own operations but it will take much longer to transform their entire supply chains to be run by renewables.

One of the presentations was delivered by a representative from LCI member company Northland Power. Sean McDermott, manager of the company, spoke about financing offshore wind projects in Taiwan. Northland Power is the world’s fifth largest independent power producer with offshore wind farms in several countries, including in Europe. In Taiwan the company is cooperating with a local partner, Yushan Energy. It has already won successful bids for offshore wind projects (Hailong 2 and 3). Its first projects are based on Feed-in-Tariffs (FITs) while it was also successful in an auction bid for another project. The speaker noted that its auction price bid was really low but that it was only able to make such a low bid because it treated all three of its projects as one project, meaning that, based on the combined price, it is still profitable. Therefore one should not just look at the price of last project, which only covers a very small percentage of the total project. The company would not have been able to bid for the whole project at that price.

The speaker stressed the importance of stable FIT regime. He made the point that the projects it has bid on so far do not take into account local content requirements. The company’s cost projections are based on the costs of procurement from international equipment suppliers. Having to meet local content requirements would add to costs. He made the point that, like many other foreign developers, his company supports the drive to build a local supply chain in Taiwan but that it should not be rushed. He made the point that it took many years to build supply chains in Europe, which eventually helped to lower costs, and that the same applies to Taiwan.

On the subject of green finance in Taiwan, there will be two main phases of financing, for the first phase of projects starting in 2019, after which there will be a short break before financing for the next phase, starting in 2023. He noted that requirements for each of the phases will be different. This is because the first phase will require more investment in infrastructure and skills but later projects will have local content (and more expensive) requirements. The early pilot projects mostly involved foreign banks and the same is expected in the first phase of financing given the foreign banks’ experience. However, in the second phase, from 2023 and 2024, local banks are likely to increase their participation. Given that income to be earned from projects in Taiwan will be in New Taiwan dollars, Northland would prefer loans to also be NT dollars in order to reduce currency risk.

The speaker said that there could be delays in early projects given the lack of experience, short weather windows and procurement and equipment and infrastructure constraints. If this happens, capital could get tied up or banks could become risk averse. It is not sure how the banking community will respond. If lenders are unwilling or unable to lend, project financing bonds is another source of funding, whereby revenues can be generated from the project. This has become more popular in Europe recently. The advantage is that they can be marketed to a broad range of institutional investors. A large pool of investors makes financing more competitive and could also potentially reduce the need for due diligence. There is also potential for green bonds in Taiwan. Taiwan has a lot of liquidity. The green bond market is still small and there are regulatory thresholds but they could play a role in financing offshore wind.

The speaker went on to talk about some of the problems with the standard “Power Purchase Agreement” (PPA) between Taiwan Power Company (Taipower) and wind developers. The PPA is probably single most important document because it guarantees income. Taiwan’s PPA is very limited by international standards at 12 pages, compared to 80-100 pages in Europe and even longer versions in South East Asia. This is mainly because many aspects are covered in Taiwan law.

However, Taiwan’s PPAs do not provide for any liabilities, remedies or compensation if Taipower fails or delays in connecting offshore wind generators to the grid. Moreover, there is no compensation regime in the PPA for any curtailments during operations. These deficiencies shift the risk of a Taipower problem to developers, negatively impacting the bankability of these projects. According to McDermott, the main issues are:

Curtailment, or the right of Taipower to decline receipt of energy or to pay for it: Curtailment is quite common in other countries to allow grid operators to manage days when there is too much renewable capacity. However, unlike Taiwan, other countries have curtailment guidance or specific terms and conditions for curtailment. Renewable energy capacity will initially be quite low and curtailment is not likely to be a problem in the early stages because Taiwan’s electricity reserve ratios are quite low. However, as more renewable capacity gets added, this will become an issue. Taiwan’s current grid capacity is about 50GW and the share of renewables is expected to account for up to 30GW by 2030. There will certainly be windy days with a lot of sun, when the energy of which will not all be able to be used. However, the current standard PPA is simply not clear as to which sources will get priority, which will be curtailed and by how much. This is a problem since both developers and their lenders need to know how they will be affected if renewable supply exceeds demand.

Assignment: It is not clear what will happen in the event of a project failure and if lenders have to take over the project.

Changes in law: There have been a lot of regulatory changes recently and also several departures from international norms. Investors need a stable regulatory environment and assurance that future changes in the law will not affect existing projects. This has to be legally specified.

The speaker concluded that the prospects for wind energy in Taiwan are bright and there are many business opportunities. However, to ensure future success, the regulatory and financing issues need to be resolved.

2019 Board of Directors and Board of Supervisors Candidate Sheets