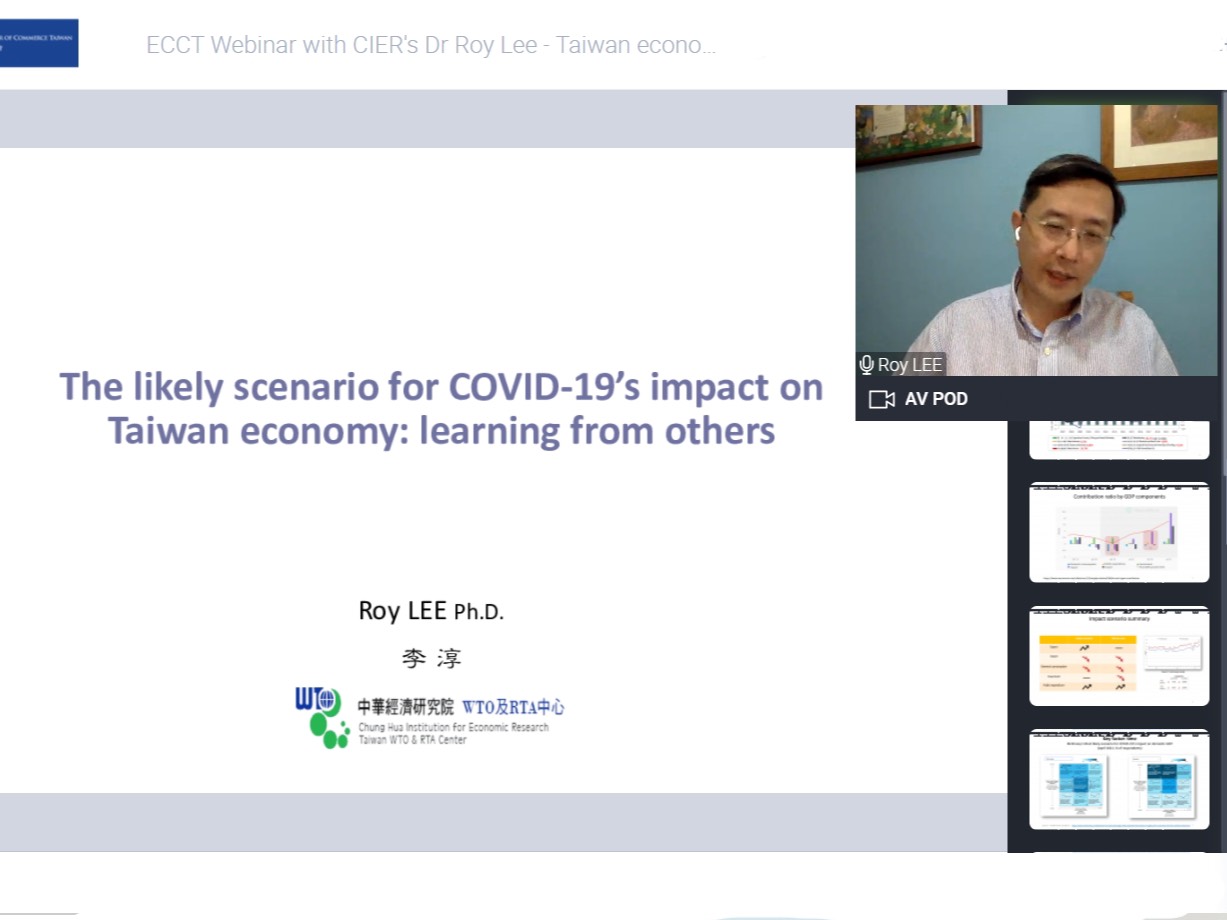 The ECCT arranged a webinar with Dr Roy Lee, Senior Deputy Executive Director of the Taiwan WTO and RTA Center at the Chung-Hua Institution for Economic Research (CIER). The speaker gave a presentation on the likely scenario for the Covid-19 pandemic’s impact on Taiwan’s economy and answered questions from the audience.

As Taiwan is experiencing a surge in Covid-19 cases later than other economies, it has the advantage of being able to learn from the experiences of other countries. How the pandemic has affected other economies also suggests possible scenarios for Taiwan.

While manufacturing remains the largest share of GDP by distribution (31.7% in 2020), real estate and ownership of dwelling accounts for 8.2%, finance and insurance 6.8%, wholesale and retail trade 6.8%, other industries 5.1%, and all other services 31.7%. Given the focus on services, the economy will obviously be severely affected by a drop in services as a result of the pandemic.

In terms of the contribution ratio by major GDP components (domestic consumption, trade, investment, and public spending) a look at past experience provides some useful information. At the beginning of the pandemic (in April last year) domestic consumption dropped by 3.5%, while exports and imports also fell (given a drop in overseas demand as a result of lockdowns in many of Taiwan’s trading partners). The only positive contributor to growth at the time was from investment, which Lee noted had been strong for the preceding three quarters as a result of local investors’ relocating supply chains (investing at home rather than overseas).

However, since October 2020 there has been a surge in export growth, which has continued ever since. By the fourth quarter of 2020, all GDP contributors to Taiwan’s GDP were positive on a year-on-year comparative basis, and this continued into the first quarter of 2021.

Now that Taiwan is experiencing level 3 restrictions, it is useful to look at how the pandemic affected the economies of other countries. Lee cited a McKinsey study looking at global figures and surveys, especially from Australia and South Korea. Based on the survey of CEOs (which was updated in April 2021), on a global basis, CEOs expect a drop in near- term growth as a result of the pandemic and slow recovery. However, CEOs in some countries are more optimistic. CEOs in Australia, for example, believe that if the pandemic is contained within a quarter, there will be a sharp recovery and strong growth the following quarter. If the Australian experience were to be replicated in Taiwan, 2Q21 would be the worst, 3Q21 would see a slight improvement and things should return to closer to normal by 4Q21.

However, Lee said that he expected Taiwan to follow a similar trajectory as South Korea. South Korea saw a sharp drop in exports at the start of the pandemic, followed by a sharper rebound, although private consumption remained subdued, which dragged down overall GDP. Since Taiwan is also an export-led economy, it has similarities with South Korea but since export demand remains strong, unlike Korea’s experience in 2020, Taiwan is likely to see continued export growth, even in the second quarter of 2021 and export trade is likely to be the main positive contributor to GDP. Imports may decrease but could be boosted by imports of components for the export sector. Domestic consumption, on the other hand, is most likely to decline. Even though more people are shopping online, overall consumption is likely to decrease. Investment is likely to remain flat or even rise given continuing supply chain diversification. Meanwhile public expenditure will rise from the government’s stimulus measures. In a worst-case scenario, public spending could be the only element of GDP that rises.

In summary, Taiwan is likely to see constant growth in exports, but domestic consumption will drop and take time to return to normal. Lee noted that it took three quarters for South Korea’s consumption to return to pre-pandemic levels.

It is hoped that Taiwan will not follow Japan’s trajectory, which experienced recurring outbreaks, which in turn led to recurring periods of economic decline after short periods of containment. (Japan experienced GDP declines in the first half of 2020, a rebound in the second half, only to fall back into decline in the first quarter of 2021.)

According to Lee, if Taiwan manages to contain the spread of the pandemic (as indicated by a falling number of cases over the past few days), there is reason for optimism. Lee expects the worst impact to be in 2Q21 and for things to improve in 3Q21.

However, he added several caveats or conditions that have to be met for the optimistic scenario: 1) There is no “de jure” (or official) level 4 lockdown. (Taiwan already has some de facto level 4 restrictions in place but a de jure level 4 would shut down factories and most other businesses, resulting in a much more severe impact than current level 3 restrictions); 2) the health impact is contained with limited recurrence until population-wide vaccinations have taken place; 3) manufacturing/export sectors do not suffer large-scale impacts; 4) global demand is able to offset the drop in consumption.

Even though we are likely to see a best-case scenario, Lee said that there will be a long-term impact from the pandemic and there is a need to be prepared for future possible pandemics. Therefore, Taiwan needs to adjust to the new normal by strengthening the resilience of supply chains, shoring up healthcare and social welfare systems, implementing digital transformation and making adjustments to work and the workforce, among other measures.

In the Q&A session, Lee said that it may take several months for Taiwan’s economy to recover, assuming level 3 restrictions are lifted. He noted that it took South Korea two quarters to see signs of economic recovery, especially in domestic services and consumption. Taiwan has so far only experienced one month of level 3 restrictions. If restrictions remain in place for another month, it may still take some time for consumer confidence to rise and lead to an increase in domestic consumption. This assumes that Taiwan does not impose level 4 restrictions, in which case the impact would be more severe and the recovery would take longer. On the other hand, he said that if Taiwan returns to level 2 restrictions within the next two months, by the end of the year it would be able to offset the damage done by the end of the year.

On a question of public expenditure, Lee pointed out that Taiwan has a buffer zone because public debt is under control, which allows the government the option to increase the stimulus budget, especially in the second half of the year, if necessary.

On a question of Taiwan’s importance to global supply chains, Lee said that going to level 4 would be bad not only for Taiwan’s exporters but also for their customers. He noted that the US and Japan are already concerned about the concentration of semiconductor manufacturing in Taiwan. While diversification should be part of long-term plans for the semiconductor industry, in the meantime, Taiwan should demonstrate that it will be able to keep supply stable.

On a question about working from home, Lee acknowledged the problem of the prevailing mindset of leaders at many local companies who do not fully understand the necessity and/or value of remote working. However, he pointed out that the pandemic has served as a great learning experience in this regard. Besides businesses, the pandemic is also forcing the government to re-examine labour laws and some officials are beginning to realise the necessity of reforms to adapt to the modern era. 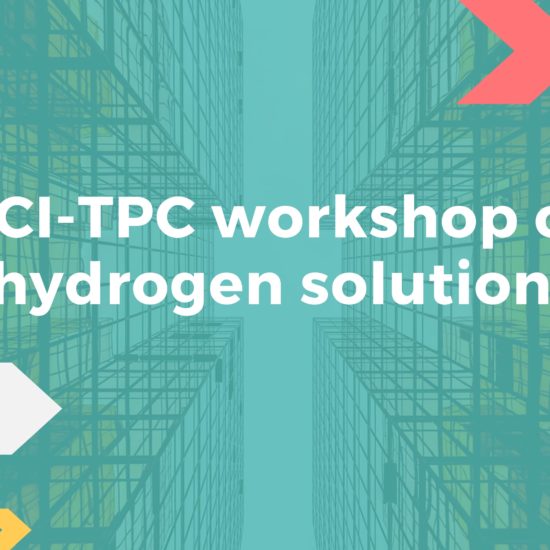