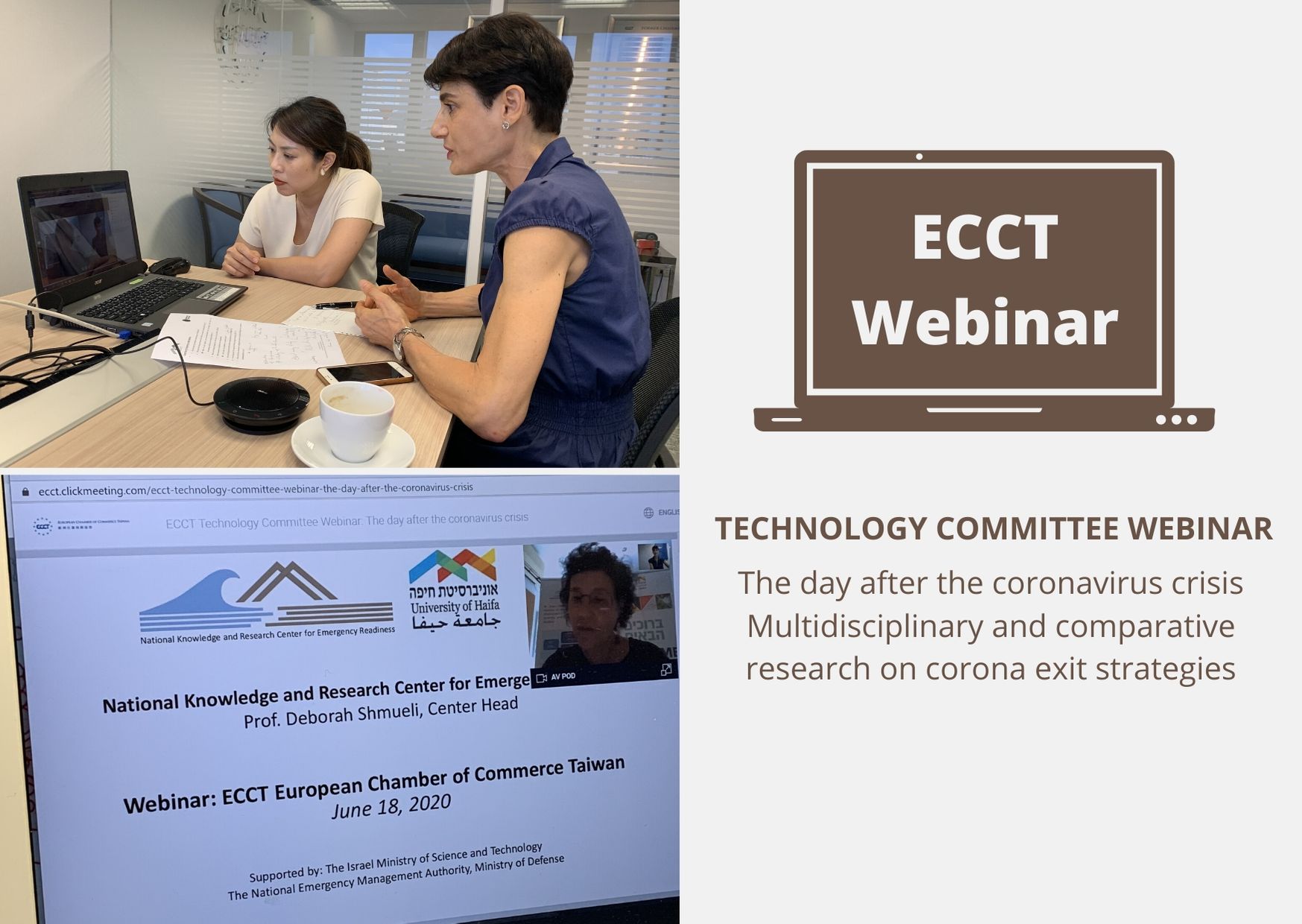 The ECCT's Technology committee hosted a webinar on the subject "The day after the coronavirus crisis - Multidisciplinary and comparative research on corona exit strategies" with guest speaker Professor Deborah Shmueli from the Department of Geography and Environmental Studies at the University of Haifa in Israel.

The speaker began with an introduction to the work that has been conducted by and is ongoing at the National Knowledge and Research Center for Emergency Readiness in Israel, that she heads. The centre is currently focusing on the Covid-19 crisis, working in conjunction with Israel's ministry of health, national Security Council, NGOs and universities, among other partners. The centre has about 90 researchers.

Prior to the coronavirus pandemic, the centre was already working on how to improve preparedness against surprises in extreme events such as fires and earthquakes, and is continuing research in fields such as urban community resilience and spatial planning schemes for emergency readiness and what to do in the time between a natural disaster and the recovery period, such as identifying appropriate sites for temporary housing.

Since the start of the pandemic, efforts have been focused on collecting and analysing data from many different regions and sources on dealing with various aspects of the pandemic, including public health and the economy. The centre periodically publishes updates on interesting statistics and findings.

One of its most recent projects was the called "The day after" - multidisciplinary strategies for coping, gradual exit and crisis recovery looked at multiple aspects including public health, economics, social welfare, government, localities and the law. In the first phase of the project, researchers looked at strategies adopted by Far East Asian countries, including South Korea, Taiwan, Hong Kong and Singapore, based on the assumption that the experience of SARS would make them better prepared for Covid-19. It was found that all crises are different in terms of scope and character and that strategies vary by country. The scale and intensity of Covid-19 far exceeds that of SARS. This has necessitated a much larger and broader economic response. While not all countries have responded in exactly the same way, they have in common support for those affected, mitigation of unemployment, encouragement of re-employment, relief for business and the self-employed and a significant role for local authorities.

In the legal field, researchers looked at the balance between the public good and individual rights and the use of emergency powers. It turns out that all of the Asian economies looked at have some type of emergency constitutional arrangements. For example, Taiwan enacted an emergency law which has been amended 10 times since SARS. Hong Kong and South Korea introduced similar laws while Singapore amended existing laws.

While there are significant differences, the Asian countries have generally been able to respond better than their counterparts in Europe and the United States. In particular, they responded earlier by shutting down borders, imposing enforced quarantines and implementing contact tracing schemes.

A number of compensation tools and tools to kick-start the economy have been employed. Some focus on increasing demand and others on increasing employment and reducing business expenses.

According to the speaker, Taiwan's successful coping does not rely on economic sources but rather due to its rapid and aggressive initial response and responsible routine behaviour. The rapid initial response, especially shutting the border, helped to stop new infections while other control measures prevented the spread of the virus.

Based on its research, the centre recommended to Israeli authorities that they immediately develop a strategy and flexible overall system for emergency preparation, response and recovery, designate authority and responsibilities of office holders and institutions, through legislation. This should be done through cooperation with other stakeholders.

Early identification and swift response is essential while plans and responses have to cover health, social and economic measures.

In the short term, initial compensation must be guaranteed to those who need it. In the intermediate term, the government must shift from doling out compensation to encouraging a return to work. Steps must be taken quickly to rehabilitate the economy (including cutting red tape to a minimum). It is also crucial to involve civilian and social organisations in crisis management. Another important aspect is improving hospitals, public health systems and health management organisations. The health plan must be based on a holistic perspective that takes into account both physical and mental health.

The speaker concluded that the key to long-term crisis management and crisis exit and recovery lies in preparedness. Essential preparations for emergencies should cover equipment supplies, the health system's absorption capacity, voluntary means of tracking, minimising health, economic and social damage and impinging on human rights and the rule of law.

In the Q&A session, the speaker stressed the importance of having legislative foundation in place to deal with a crisis. When asked how corporations build resilience, she noted that technology platforms are very important and that many companies had managed to keep things going by putting in place systems to allow employees to work remotely. This may become a permanent part of the future world of work. She also reiterated that there has to be a focus from the beginning of the crisis to identify the vulnerable and to provide to them what they need up front.