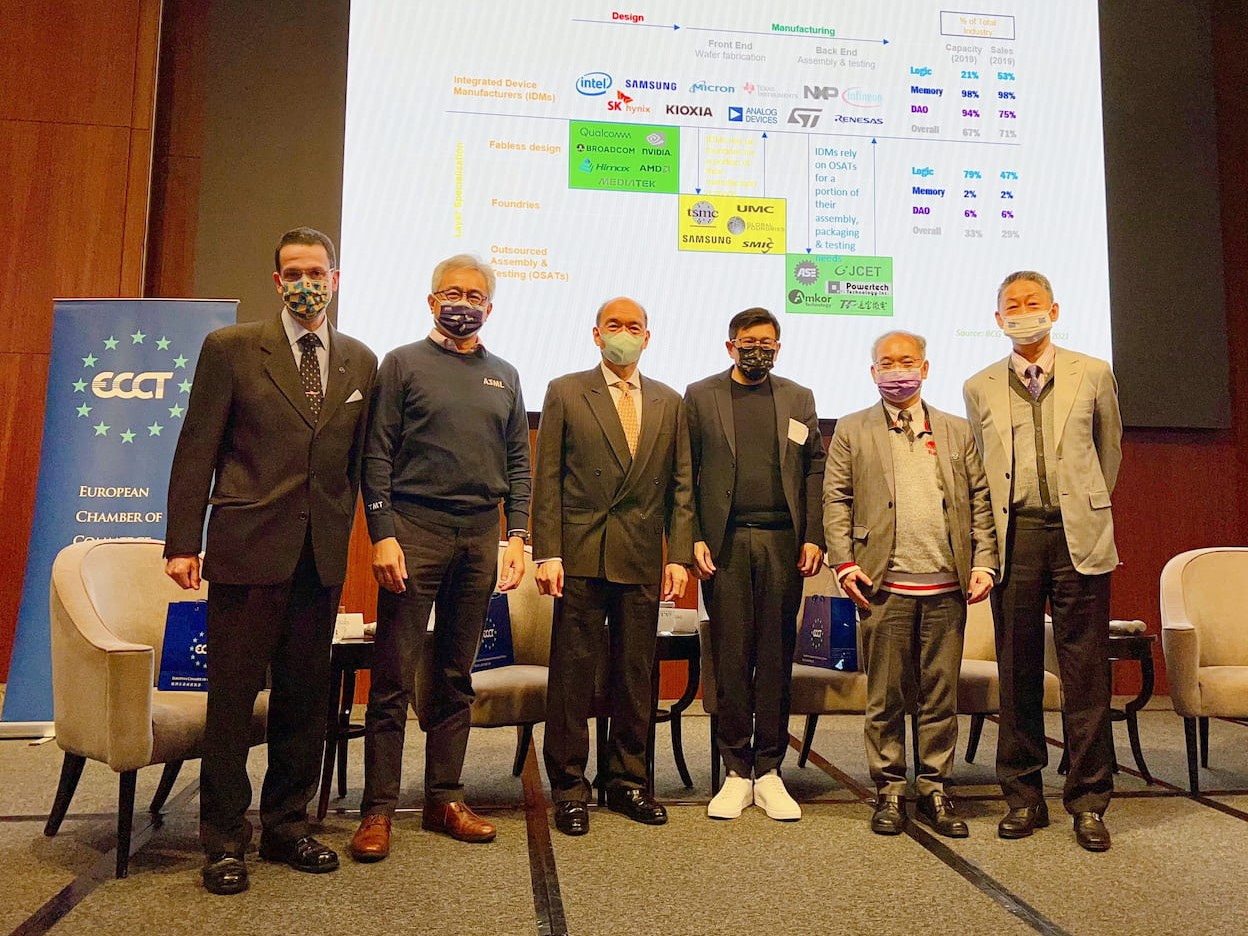 The ECCT arranged a Next Generation Business & Leaders Series Premium Event on the topic of ASML and the future of Taiwan's electronics industry. The latest event in the series, and the first of 2022, featured a presentation by guest speaker Tony Chao (趙中榛), Senior Managing Director of ASML Taiwan's Center of Excellence, and a panel discussion featuring the speaker and panellists Terry Tsao (曹世綸), Global Chief Marketing Officer and President of SEMI Taiwan; Emile MP Chang (張銘斌), Director-General of the Department of Invest Services (DOIS), under the Ministry of Economic Affairs (MOEA) and Jordan Wu (吳炳昌), President and CEO of Himax Technologies. The panel discussion was moderated by ECCT Chairman H Henry Chang.

In his presentation, Tony Chao gave a detailed explanation of how semiconductors are made, as well as ASML's role in the supply chain and global semiconductor market.

Semiconductor chips have dozens of layers, which Chao likened to layers of a cake. Advances in technology have enabled more and more transistors to be crammed into ever smaller areas, thereby enabling smaller and more powerful chips and for more chips to be made from a single silicon wafer. While it takes a lot of energy to produce semiconductors, making them smaller means that they need fewer raw materials and are more energy efficient.

Semiconductors are ubiquitous and crucial to the development of almost every industry. Semiconductors, for example, are transforming automotive technology. Automotive sensors are mapping the world in millions of data points per second, enabling the path to autonomous driving.

Another trend is the booming business of immersive gaming, which will further boost an industry that is already worth €100 billion. Today's virtual reality (VR) games are a prelude to fully immersive games in the future with 64x HD-quality, rivalling the human eye.

Major infrastructure improvements have driven even more data volume and real-time use. On a 3G network it used to take 26 hours to download a two-hour movie. With 4G, this was reduced to six minutes and with 5G to just 3.6 seconds.

In 2020 global semiconductor sales reached US$450 billion and one trillion chips were shipped, equivalent to 130 chips for each person on the planet.

Moore's Law, which predicted a doubling of transistor capacity roughly every two years, has held true since it was formulated, and Chao expects it to continue beyond the next decade as the industry is moving towards one billion transistors per square millimetre. Thanks to shrinkage, chips are not only becoming smaller, faster and more energy efficient but also cheaper. This, he says, creates a virtuous cycle that can transform markets.

He cited examples of how AMD's latest processor made using 7 nanometre (nm) technology is twice as fast and uses half the power of the generation made using 14nm technology. Similarly, Nvidia's latest core GPU using the latest technology means that you can get the equivalent capacity and performance from one server rack that used to require 25 racks, using one twentieth of the power and costing one tenth of the older version. Compared to what was then (in 1984) a state-of-the-art computer, IBM's 5150, the iPhone 12 Pro is a fraction of the size, costs half the price yet packs thousands of times the computing power.

ASML's customers spent US$151 billion in capital expenditure in 2021. Of this, around 20% was used to procure equipment from ASML, demonstrating the company's crucial role as an equipment provider.

Chao went on to explain how ASML's Deep Ultraviolet Lithography (DUV) machines work, using illustrations and videos. The machines are incredibly complex, having taken 20 years or R&D to develop. They have over 100,000 individual parts, 40,000 bolts and 2km of hosing, weigh 180 tonnes each and require 40 containers, 20 trucks and three fully loaded 747s to transport.

The company is about to expand its R&D capacity in Taiwan to further improve the machines in the future. A new parts replacement centre will be located in Taiwan, thus making Taiwan a manufacturing base for EUV components and parts, more and more of which will be manufactured in Taiwan.

In the Q&A session Emile Chang said that his office had seen a huge increase in inbound investments into Taiwan over the past three years, both from local and foreign investors as they move to diversify their supply chains.

Terry Tsao noted that SEMI not only advocates on behalf of its own 2,400 members in the industry but also for the development of renewable energy and supports the development of new technologies and talent. As the world's number 2 market in terms of production value, number 1 in foundry and number 2 in fabless design, he said he expects Taiwan to continue to play a crucial role in global semiconductor development, building on its reputation as a trusted partner (helped by the fact that local players do not compete with their customers).

Jordan Wu introduced Himax, one of the world's top 10 fabless chip designers with a 40% global market share of Driver ICs. He said that he anticipates strong growth in the AIOT and automotive sectors ahead.