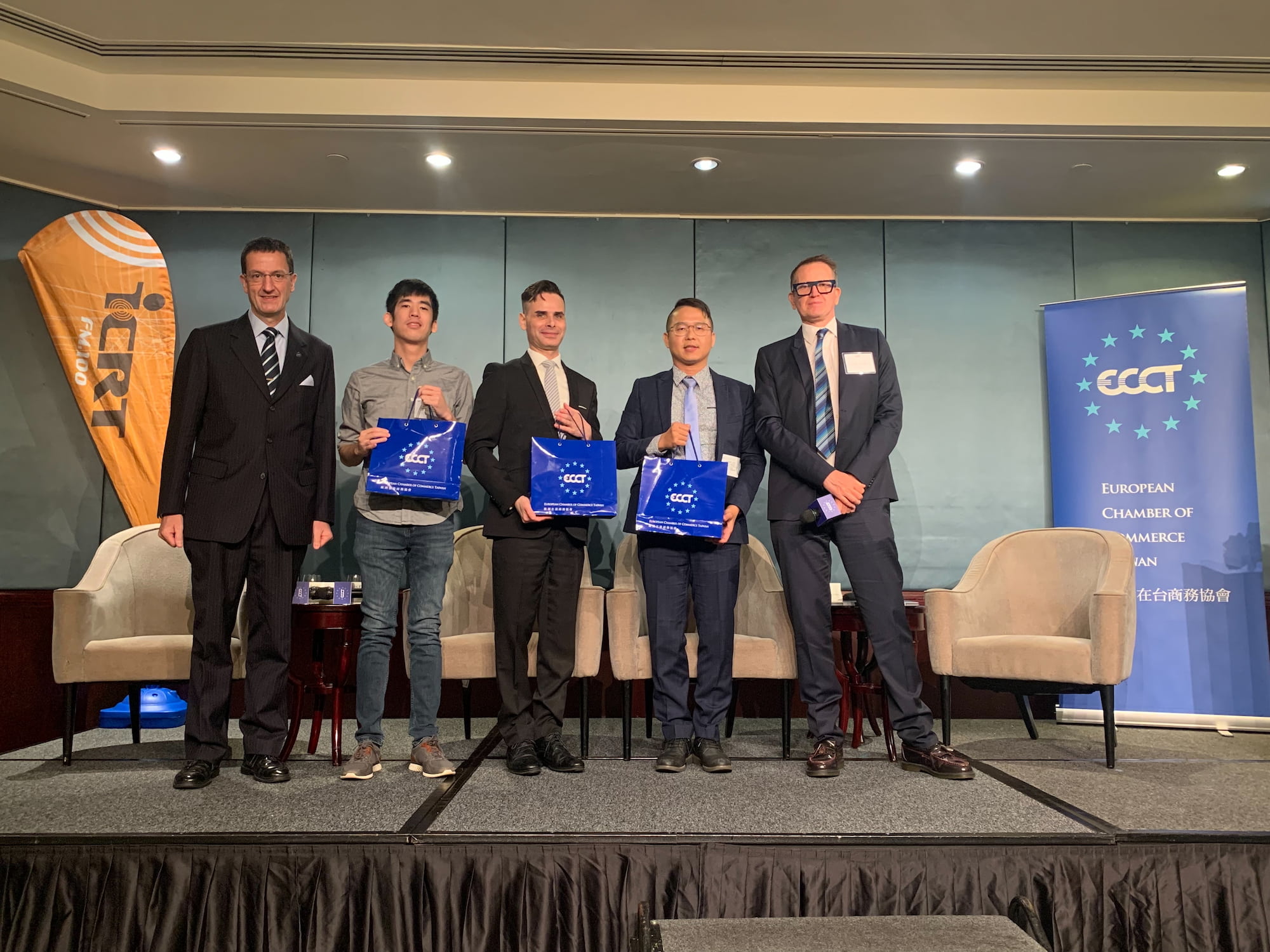 The ECCT, in conjunction with ICRT, hosted a special lunch to discuss the forthcoming four-in-one referendum to be held on 18 December. The event featured a free-flowing panel discussion moderated by Gavin Phipps from the ICRT News Department and panellists Albert Chiu, Professor in the Department of Political Science at Tunghai University; Ross Feingold, Political Risk Analyst & Special Counsel for Titan Attorneys-at-Law and Brian Hioe, Founding Editor of New Bloom Magazine.

Gavin Phipps began by saying that some 20 million people are eligible to vote in the referendums at around 17,000 polling stations around Taiwan, which will be open from 08:00-16:00 on 18 December.

Panellists agreed on the general point that referendums had become politicised. Brian Hioe made the point that both the ruling Democratic Progressive Party (DPP) and opposition Kuomintang (KMT) have switched sides on referendum issues at various times, depending on whether they were in power or in opposition. This time around the DPP is urging voters to vote no on all four referendum proposals while the KMT is taking the other side of the issues. Panellists also noted that the DPP’s move to lower the thresholds for both referendums and recall elections* since 2016 has proven to be a double-edged sword. On the one hand, lower thresholds have made it easier to remove elected officials who are corrupt or inept and to pass referendum motions. On the other hand, they make it easier for the opposition to weaponize the process for political reasons.

The panellists went on to discuss each of the referendum topics in turn.

On the topic of referendum dates, the question asks whether referendums should be held alongside general elections if a referendum proposal is confirmed less than six months before a general election. Currently, according to Taiwan’s Referendum Act, referendums may only be held once every two years on the fourth Saturday in August (although this year’s referendum was postponed by four months due to the coronavirus pandemic).

The decision to hold referendums on separate dates from national or municipal elections was justified based on experience from the 2016 election when the presidential, legislative as well as multiple referendums were held on the same day, causing long lines and delays at some polling stations. However, it has been argued that this is a convenient rationale that disguises the real intention to make it more difficult for the referendum threshold to be reached (for a referendum proposal to pass, 25% of eligible voters need to vote yes) given that referendums proposals tend to be supported by the opposition. Panellists also made the point that the types of logistical problems that were witnessed in 2016 could be resolved and that opponents of the current system have a point that it is costly to hold referendums separately from national elections.

On Ractopamine pork imports, the question has to do with attempts to lift restrictions on the import of pork from the United States, which contains Ractopamine. Supporters of the referendum argue that meat that contains ractopamine (an additive that is illegal in 160 countries) could damage human health and local producers. Opponents argue that not allowing US pork imports would harm Taiwan’s relations with the United States, including its ongoing trade talks with the United States, as well as efforts to join the regional Comprehensive and Progressive Agreement for Trans-Pacific Partnership (CPTPP). Panellists noted that both the KMT and DPP have switched sides on this issue, arguing, while they are (or were) in power, for pragmatic reasons, that US pork imports are a necessary evil in order to further Taiwan’s trade relations and against it while in opposition. Panellists were divided as to how much a decision to ban Ractopamine pork imports would really affect Taiwan’s trade relations, both with the US and members of the CPTPP.

The algae reef protection referendum question refers to the construction of a receiving terminal for natural gas on Taoyuan’s Datan Algal Reef. It is argued as necessary by the government as part of its plans to phase out the use of coal but heavily criticised by environmental activists due to potential damage to the reef and its ecosystem. This is another issue on which the KMT and DPP have switched sides. The DPP sided with environmentalists when it was in opposition but now takes the pragmatic view that environmental damage will be limited and that the terminal is necessary as part of Taiwan’s energy transition, saying that natural gas combined with renewables is preferable to the current mix which includes coal and nuclear and necessary for Taiwan’s overall energy security.

On the topic of the fourth nuclear power plant, the question is on the activation of Taiwan’s fourth Lungmen Nuclear Power Plant, which is located in New Taipei City. The plant was under construction until 2014, when it was shut down due to concerns about nuclear safety and later mothballed permanently as part of the ruling DPP’s policy to phase out nuclear power. The question on the ballot reads: “Do you agree that the fourth Nuclear Power Plant be activated for commercial operations?". On this issue, the DPP has been consistent in its opposition to nuclear power. Ross Feingold expressed the view that regardless of whether the referendum passes, Taiwan’s next president (whether s/he is from the DPP or KMT) will find it very difficult to restart the fourth nuclear power plant. At issue is not just the safety of the plant in question but also nuclear power in general as well as NIMBYism (Not in My Backyard).

Albert Chiu pointed out that voters have been somewhat fickle on the nuclear issue, shifting positions depending on what is going on at the time. In particular, opposition to nuclear power was especially strong after Japan’s Fukushima disaster. However, proponents of nuclear power managed to win support at times when Taiwan has experienced power supply problems. However, when push comes to shove and if any politician actually tries to activate the plant, there is sure to be a strong reaction from nuclear opponents, which could derail the process.

Finally, panellists talked about how the prospects for the referendums passing will depend to a large extent on voter turnout. Albert Chiu cited several polls which show narrow majorities either for or against each of the referendum topics. With campaigning for or against the referendums split more or less along party political lines, the outcome will therefore have a lot to do with whether enough people turn out, which will depend not only on which party is able to mobilise more of their supporters but also other factors, such as the weather on the day (cold and rainy weather may result in lower turnout). Assuming that proponents and opponents are split roughly evenly, voter turnout would need to be above 50% of all eligible voters for the referendums to pass.

*Since 2016, in legislation proposed and supported by the DPP, proposing a recall requires signatures from just 1% of the relevant electorate. Thereafter, signatures from only 10% (down from 13% previously) of the voting population are needed to advance the proposal to an official vote. Finally, for the outcome to be valid only 25% of voters need to participate – down from 50% previously.

In December 2017, the threshold for the initiation of national and regional referendums was lowered from 0.005% of the electorate in the most recent presidential election to 0.0001%. The number of signatures required for a proposed referendum to pass its second stage was lowered from 5% of all eligible voters in the most recent presidential election to 1.5%. For a referendum to pass, 25% of eligible voters must vote yes.