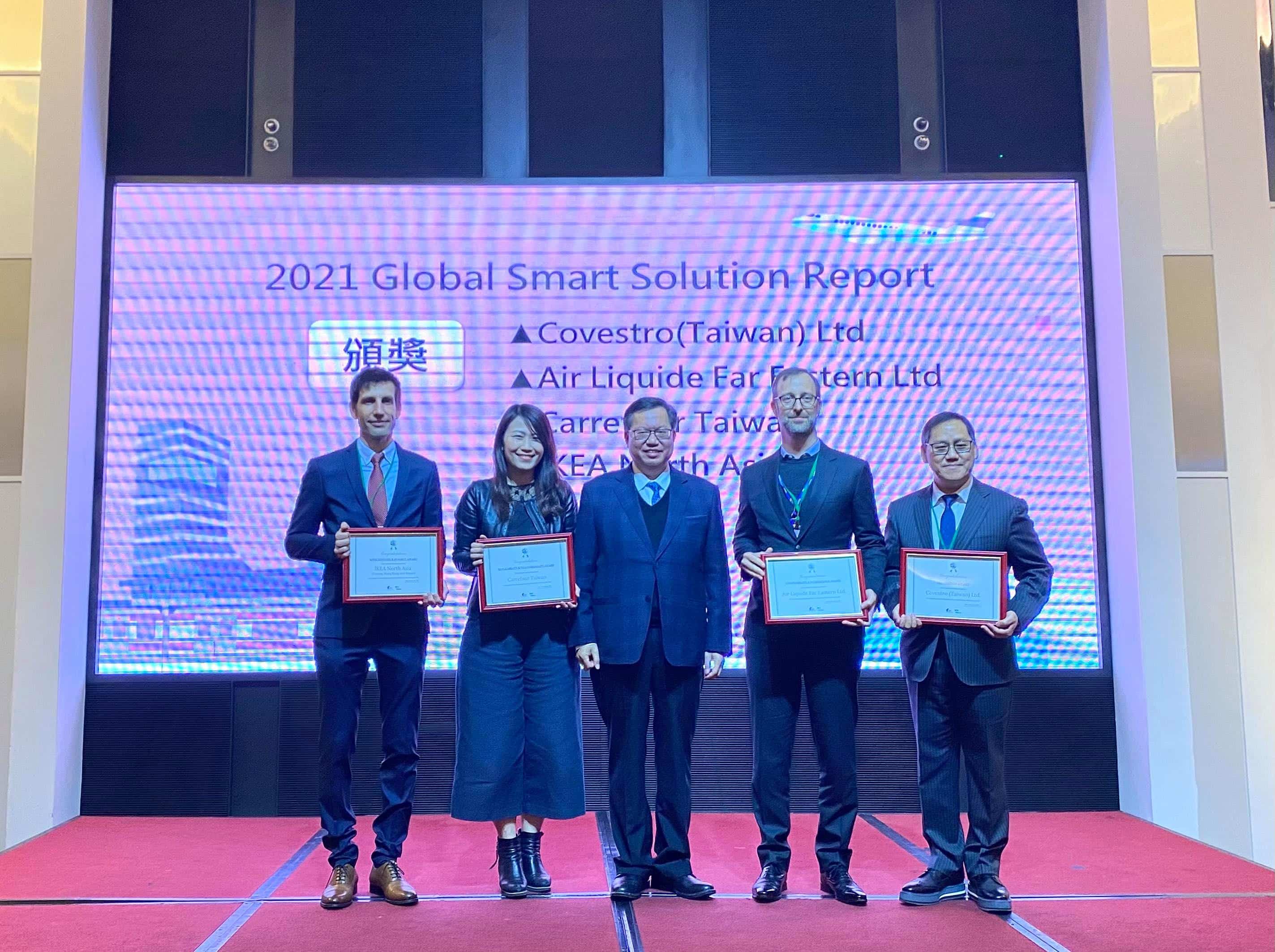 The Taoyuan City Government together with the ECCT’s Low Carbon Initiative (LCI), the International Climate Development Institution (ICDI), and ICLEI Local Governments for Sustainability have released a new report. Outlining smart solutions for eco-mobility and eco-logistics, the report was released at a VIP dinner that followed immediately after the 2021 Sustainable City Forum on 24 March. The report features chapters by four ECCT LCI members: Air Liquide (亞東氣體), Carrefour (家樂福), Covestro (科思創), and IKEA (宜家家居). At the launch, Taoyuan Mayor Cheng Wen-tsan (燦市長) gave opening remarks and handed out awards to the contributing companies. 350 hard copies of the report will be distributed to central and municipal government officials in Taiwan and an electronic version of the report will be made available online in early April.

The following is a summary of topics are covered in the chapters of the report by ECCT member companies:

Air Liquide is working on solutions for hydrogen, which could be an optimal solution to address the intermittent nature of renewable energy sources by converting the excess electricity produced during windy or sunny weather into hydrogen. Air Liquide hopes to help Taoyuan transform into an eco-logistics-centred society where hydrogen and the recycled CO2 from hydrogen production can be used in a wide range of applications: hydrogen mobility/fuel cell vehicles (already adopted by Japan, Korea and China), silent cryogenic refrigerated vehicles, and replacement of liquid natural gas, and as a long-term energy storage medium. These approaches will contribute to help Taoyuan City reduce CO2 emissions and build the eco-Logistics pilot model for other cities to follow.

To support the Taoyuan City government's ambition of building a sustainable, low carbon airport city, Carrefour has embarked on a green warehouse project in Yangmei by taking ecological logistics, low carbon transport, and sustainability into consideration. Solar panels and rainwater harvesting systems are also installed to materialise the concept of green energy. In addition to advocating for plastic/carbon reduction and energy conservation, Carrefour has introduced energy-saving equipment and measures such as a smart coolant water purification system, advanced cooling and lighting systems, heat-shielding windows and auto start/stop systems installed on escalators.

An innovative material developed by Covestro has been used to develop an Air Fom tyre that has been successfully introduced in the Netherlands and Belgium and is used by local bike-share providers in Amsterdam and Brussels. The Air Fom system provides bike-share operators with full fleet reliability and, much lower operational costs. The system greatly helps cyclists solve their flat tire issues, letting them enjoy worry-free cycling. In addition, when the Air Fom system reaches the end of its service life, share fleets and bicycle shops can collect all used inserts. Air Fom will then arrange collection and recycling in order to complete the closed loop recycling of the inserts back into their original raw material.

Ikea has an ongoing mission to reduce the environmental impact from the production of goods and services. Given that products have to be shipped from suppliers to distribution centres and then to customers, the company is also looking for new ways to innovate and reduce CO2 emissions of its logistics operations by working directly with suppliers, governments, and other partners. Ikea is investing in ways to reduce the emissions of all aspects of shipping, by sea and land. Overall, the goal is to reduce emissions by 70% per shipment by 2030.