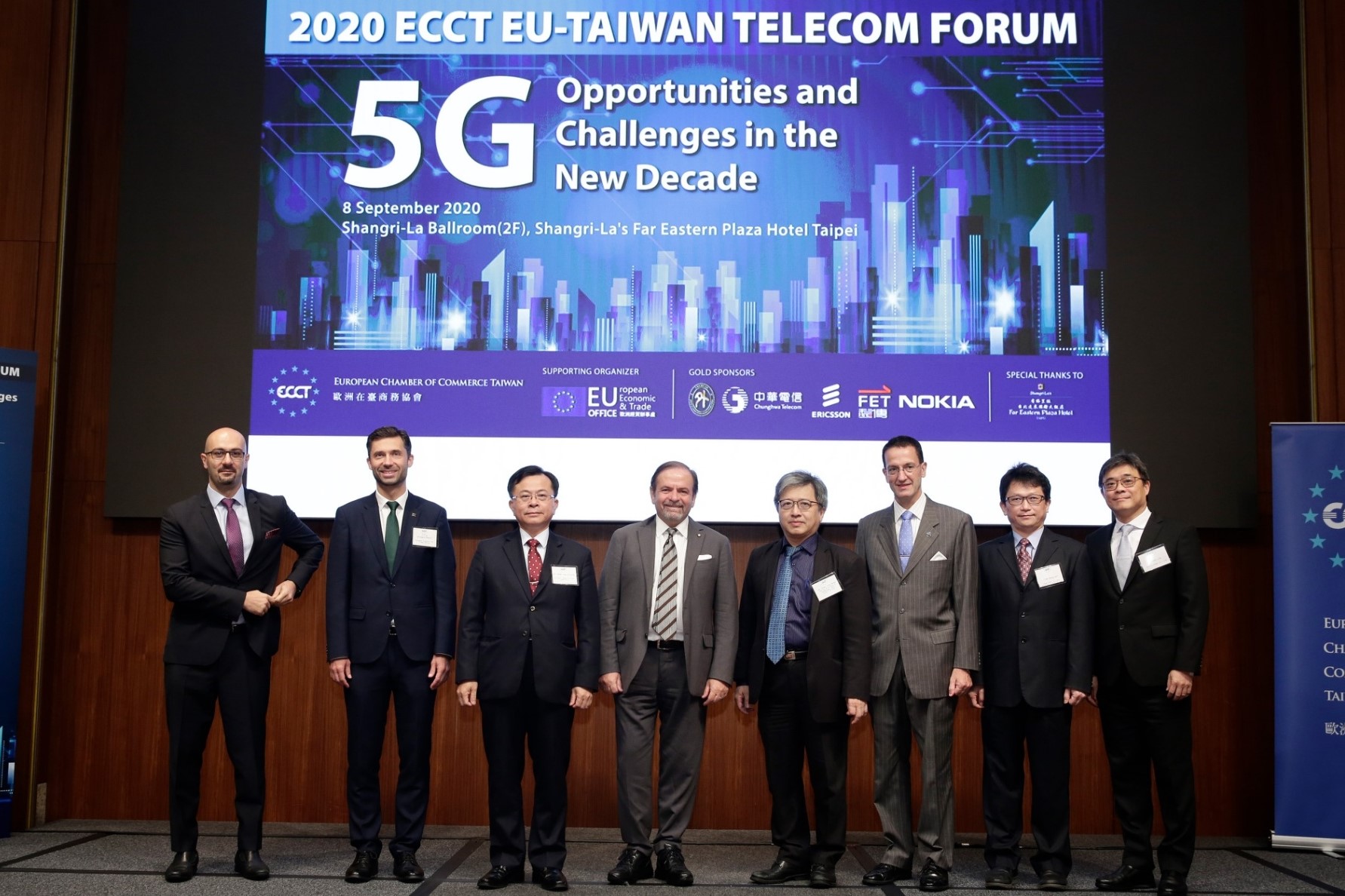 The ECCT hosted the 2020 ECCT EU-Taiwan telecom forum for the sixth time since 2009, with support of the European Economic and Trade Office. Under the theme of "5G - Opportunities and challenges in the new decade", the forum featured opening remarks by the guests of honour and presentations and a panel discussion by officials from Taiwan and Europe.

Opening remarks were made by Filip Grzegorzewski, Head of Office of the European Economic and Trade Office, Dr Tsai Zse-hong, Executive Secretary of the Office of Science & Technology, Board of Science and Technology, under the Executive Yuan and ECCT Chairman Giuseppe Izzo.

Presentations by officials from Taiwan were delivered by Dr Tsai Zse-hong, Dr Chen Yaw-shyang, Chairperson of the National Communications Commission, Jyan Hong-wei, Director of the Executive Yuan's Department of Cyber Security and Johnson S Chiang, Director-General of European Affairs under the Ministry of Foreign Affairs. In addition, a presentation was given by Dr Stefan Kramer, Delegation of the EU to Japan and First Counsellor for Science, Innovation, Digital and other EU Policies.

In his presentation, Dr Tsai Zse-hong gave an overview of Taiwan's 5G action plan for 2019-2022. He reported that Taiwan held auctions for 5G spectrum, starting in December 2019 and concluding in February 2020. Total bids reached NT$142.19 and a total bandwidth of 1870MHz has been released for 5G, including 270MHz from the 3.5GHz band, 1600MHz from the 28GHz band. Further spectrum will be released at a later stage, although this will require some planning and prioritisation, as bandwidth is now being used for other services. Taiwan's three largest telecom operators have already launched 5G commercial services.

On the subject of cybersecurity, Tsai noted that 5G poses new challenges to maintain security given the multi-vendor environment and the increase in cloud-based applications. Rules for restricting "hazardous products threatening national information security" were announced by the Executive Yuan in April 2019, which each government agency to collect suggestions and conduct an overall analysis of national security issues, international cyber information, potential risks and impacts and to supervise the owners of major infrastructure and government-sponsored corporations to ensure that they conform to the law.

Among other support measures to speed up 5G development, the government will provide financial subsidies for 5G network construction and invest in a new submarine cable data exchange centre. To close the gap between urban and rural areas, the government will guarantee 5G broadband accessibility in rural areas and provide 5G-enabled devices and 5G-enabled classrooms to primary and secondary schools in remote areas.

Dr Tsai concluded that Taiwan offers excellent overall abilities for the development of 5G technology. In particular, Taiwan has a supply-chain ready 5G industry with mature technical capabilities and high reliability. He also emphasised the potential for the 5G broadband network to address cyber security threats, which highlight the need for a reliable mechanism for cooperation between Taiwan and Europe.

In his presentation, NCC Chairperson Dr Chen Yaw-shyang spoke about the Telecommunications Management Act and the development of 5G industries.

He reported that Taiwan is committed to aligning with the so-called "Clean 5G Network", announced by US Secretary of State Mike Pompeo which requires "a Clean Path for all 5G network traffic entering and exiting US diplomatic facilities and an end-to-end communication path that does not use any transmission, control, computing, or storage equipment from untrusted IT vendors".

The NCC is also promoting network sharing, given the benefits of cost reductions, faster and wider coverage, improved spectral efficiency, environmental benefits (less land use and energy consumption), enhanced consumer choice and competition. To encourage innovation, the NCC is granting experimental permits. According to Chen, 20 such permits have already been approved.

The Telecommunications Management Act was passed into law in 2019 and went into effect on 26 June 2020. The act is designed to lower market barriers. Among other measures, the act changes the existing concession and licensing system to a registration system, relaxes regulations on the establishment of telecommunications networks, deregulates small cells, introduces a spectrum sharing mechanism and allows spectrum leasing, lending and transfers.

In his presentation, Jyan Hong-wei, Director of the Executive Yuan's Department of Cyber Security spoke about cyberspace and cyber security in Taiwan. He noted that Taiwan's cybersecurity activities date all the way back to 2001 with the complete classification of government agencies based on needs and risks. The most recent effort, the National Cyber Security Programme from 2017-2020, aims to build a joint-defence mechanism, improve self-protection capacity and develop a cybersecurity industry.

According to Jyan, as part of efforts to cultivate talent for the local cybersecurity industry, the government has helped four local universities to set up five departments dedicated to cybersecurity, including one which has a PhD programme.

The Cyber Security Management Act was implemented on 1 January 2019, targeting both national and municipal public authorities and non-public authorities, especially critical infrastructure providers, state-owned enterprises and government-endowed foundations. Jyan cited the need for education about cyber security not only of government officials but also in schools, universities and the private sector.

Citing some cyber security incident statistics, Jyan noted that the most common type of incident in 2019 was a denial of service attack. The government's analysis also revealed many common security weaknesses, including systems with overly simple passwords and promotional websites, which were not updated and left sensitive information exposed.

In his presentation, Dr Stefan Kramer gave an overview of the European Commission's data strategy and AI white paper. "A Europe fit for the digital age" is third in the list of priorities of European Commission President von der Leyen, after a European Green Deal and an Economy that works for the people. This builds on the 2018 Data Package that includes different policy instruments for different types of data.

The objective of the EU's Open Data Directive (EU 2019/1024, to be transposed into national laws of EU member states by 16 July 2021) is to make as much data available to the public as possible, free of charge, especially data on geography, statistics, climate and research. The directive is designed to stimulate the publishing of dynamic data and the uptake of Application Programme Interfaces (APIs), limit the exceptions which currently allow public bodies to charge more than the marginal costs of dissemination for the re-use of their data, enlarge the scope of the directive to (data held by public undertakings, research data resulting from public funding), strengthen the transparency requirements for public–private agreements, avoid exclusive arrangements, require the adoption by the European Commission of a list of high-value datasets to be provided free of charge. They will also serve as key data sources for the development of Artificial Intelligence.

While the Open Data Directive is designed to make more information available to the public, this may not be at the expense of privacy, particularly the provisions of the General Data Protection Regulation (GDPR), which offers a high standard of data protection to EU citizens, stronger enforcement rules and fines, among others.

The Regulation on a Framework for the Free Flow of Non-personal Data in the European Union (applicable as of 28 May 2019) has a series of measures to enhance trust and facilitate data flows. This includes prohibition to impose data localisation restrictions by national authorities, measures to address jurisdictional concerns and facilitate access to data for regulatory purposes, even when data is stored on cloud services located in another member state, support for self-regulatory approaches through a code of conduct to facilitate data portability and switching of cloud services, and legal clarity on specific security requirements.

The European Union aims to create a common European data space and a single market for data, to create a rich pool and free flow of data across countries and sectors, including health, manufacturing, agriculture, finance, mobility, energy and public administration.

The European Commission aims to achieve excellence in AI by setting up public-private partnership in AI and robotics, strengthening and connecting AI research excellence centres, have at least one digital innovation hub per member state specialized in AI (testing facilities, advice on market and financing for SMEs and start-ups), providing more equity financing for development and use of AI, with the help of the European Investment Fund, using AI to make public procurement processes more efficient and support the procurement of AI systems by public bodies.

To achieve trust, new legislation on AI will be adapted to the risks, be effective but not limit innovation, require high-risk AI systems to be transparent, traceable and under human control. While high risk applications such as those involving healthcare, transport, policing and the legal system, will be subject to strict regulation, low risk applications will only be subject to light touch regulation. Authorities must also be able to check AI systems as they check cosmetics, cars or toys, ensure unbiased data sets and launch an EU-wide debate on the use of remote biometric identification (such as facial recognition).

In his speech, Johnson S Chiang, Director-General of European Affairs in the Ministry of Foreign Affairs, spoke about maintaining an open, democratic and sustainable digital society. He noted that Taiwan has well developed industry sectors, especially in specialist IT segments, which could be at risk if they are not well protected against external threats. He spoke about the need for action to fight disinformation and to diversify supply chains. Given that Taiwan and Europe are like-minded partners, he said that there are great opportunities for cooperation in both these areas between authorities in Taiwan and Europe as well as think tanks, academia and civil society groups to uphold shared values and protect open societies.

The event was concluded with a panel discussion featuring all the speakers that was moderated by Chafic Nassif, co-chairperson of the ECCT's Telecommunications, Media and Content committee.