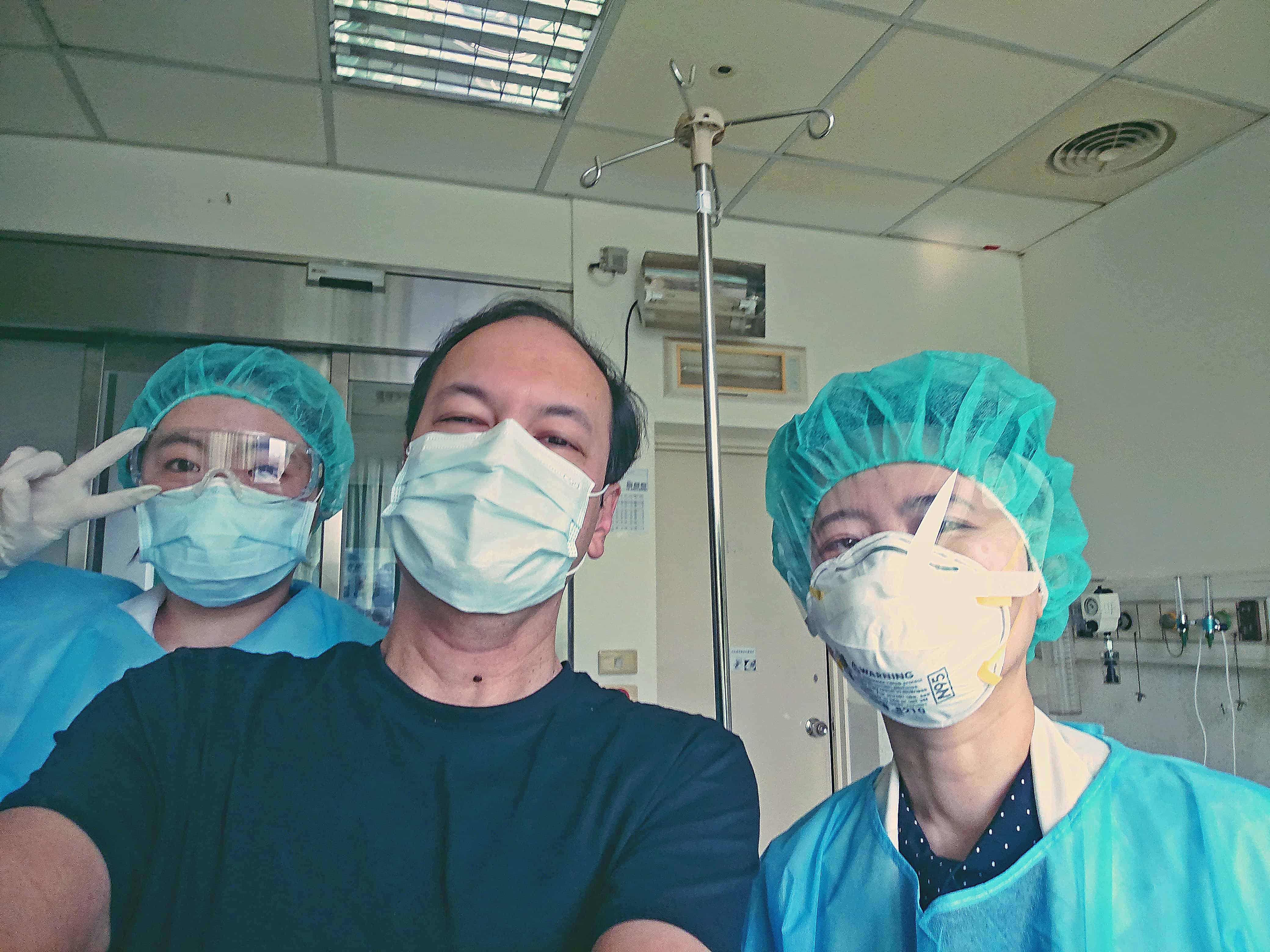 The ECCT hosted a webinar on the topic "Recovering from Covid-19 - Personal experiences and perspectives from Case 50, a coronavirus survivor in Taiwan" with guest speaker

Douglas Habecker, Co-Publisher of Compass Magazine. The speaker was the 50th person in Taiwan to contract the coronavirus. He spent 19 days in a hospital in Taichung being treated until he was finally released. At the webinar he shared the story of his experience.

Habecker first felt symptoms one evening in his office when he experienced chills, extreme fatigue and a slight headache. He went home and rested for a day and thought that he had recovered after he was able to go for a long bike ride. However, the following week he began to experience symptoms including a dry cough. Another striking symptom was a severe impact on his sense of taste. According to Habecker, all food tasted strange or lacked flavour, which made him virtually stop eating. When his coughs started showing traces of blood, he decided to go to the hospital. He asked for a Covid-19 test. However, tests are not the first automatic response. The standard procedure is to have a chest x-ray, blood tests, a nasal swab and to ask patients to answer a set of standard questions about recent whereabouts, particularly, any overseas travel. Since Habecker had spent the past two months in Taiwan, he didn’t fit the profile for Covid-19 patients.

However, his lung x-rays did show some "cloudiness" and his bloodwork was not normal, so the doctor requested that he spend 2-3 days in hospital for observation and treatment. He was asked to stay in a private room to prevent potential infection of others. Over the next several days, he was given supportive treatment which included anti-flu medicine, antibiotics, intravenous fluids and other medications.

During this time, the doctor assigned to his case also stopped by once a day with updates and questions. According to Habecker, it was her continued questions that prompted him to think of a one-day visit to his home in Taichung by four American friends, only three days before he first began feeling sick. They had spent the day touring Taichung in his car and he then recalled that one of his friends had commented that he had some chills and didn’t feel too well over dinner that night.

He then sent a message to his friends, asking how they had been doing since leaving Taichung. They replied that they had all been sick, albeit with mild symptoms. Habecker’s reporting of the news prompted immediate rush to action. A throat-swab Covid-19 test was ordered and his medical caretakers suddenly began entering his room in full personal protective equipment (PPE). Although the first test’s “weak positive” result wasn’t entirely conclusive, he received a call from Taichung City Government health officials, informing him that they had asked the hospital to immediately relocate him to a negative-pressure isolation room. His second test also came back positive.

At that point, another much-heralded and critical element in Taiwan’s Covid-19 success came into play, contact tracing. Via a series of phone calls, city health personnel began carefully reviewing his whereabouts and those he had any significant encounters with just before and after he began feeling ill. With his help, they also established a direct link to his four friends for further information regarding their time in Taipei, flights in/out of Taiwan and other details. All four of his friends, as well as one of their elderly mothers, were later confirmed to have been infected with Covid-19.

Habecker said that he was impressed by the thoroughness of Taiwan’s tracing system. He was also impressed and moved by the calm courtesy, patience, understanding and discretion of tracing officials, which made the entire process much less stressful. This, he said, is in stark contrast to some countries where patients are often treated almost like criminals. Officials also reassured him that, outside of those individuals they would need to contact, his anonymity was being protected. Even the hospital at which he was staying remained a well-guarded secret.

Despite occasional coughing, Habecker said that his form of pneumonia was, fortunately, quite mild. He did not have severe breathing problems, unlike other patients, although he felt a sort of pressure in his lungs. He never had to use a ventilator.

Commenting on his impressions of Taiwan’s healthcare system, Habecker said that he was happy to catch Covid-19 in Taiwan given that the standard for treatment is high and strict. He noted the contrast with other countries where many patients are discharged before they’ve recovered completely. He reported that the care received from nurses and doctors was excellent and the hospital facilities and rooms were good.

That said, foreigners need to be aware of some crucial differences between Taiwan’s healthcare system and those in western countries. For example, when he was first suspected as having Covid-19, he was transferred to a private room which cost NT$4,200 per night, not paid for by National Health Insurance (NHI), which only covers shared rooms. Although all costs were covered for the time he was in a negative pressure room, when his condition was regarded as no longer critical, he was transferred back to private room, with the additional out of pocket costs. In addition, he had to request and pay for hospital food during his stay, as it was not automatically provided. While he said he was quite happy with the Taiwanese-style lunch box meals provided, other westerners may not be so flexible. Nevertheless, his overall out of pocket bill of around NT$30,000 for a 19-day hospital stay, would be regarded in any western country as very inexpensive.

Another thing foreigners should be aware of is the potential language barrier. Habecker said that he was able to communicate fairly well in Chinese, except for some medical terms. Foreigners without Chinese ability might find things a bit more challenging given the varying level of English ability among doctors and nurses across Taiwan.

As to how he feels now, he described his condition as somewhere between 90-95% recovered. On the third day after his discharge he went for a 50-kilometre bike ride without any problems and he has continued riding since then. He still feels a bit of pressure on his lungs but he regards himself as lucky as he’s since learnt that some Covid-19 patients have had lasting or permanent damage to their lungs.

Habecker described getting out of hospital as surreal. When he was released, he was told it was no longer necessary to go into quarantine upon release (which had been a requirement previously). This was because he had tested negative three times in a row, which is a precondition for release and for patients to receive an official release document. However, he was advised to avoid contact with others as much as possible.

As to how he has been treated since then, Habecker said that he sensed that his colleagues were a bit nervous about being in close proximity to him so he limited time at the office and mostly worked from home. He was not sure if his neighbours were aware of his diagnosis but since officials had visited his residential building, he suspected that his neighbours had probably guessed, from not having seen him for three weeks, that he was a patient (even though his identity and Covid-19 status was never revealed).

As to why he decided to go public, Habecker said that he wanted to help inform people about a disease that still has a lot of unanswered questions surrounding it. Moreover, by telling his story, he wanted to reassure people of the quality of Taiwan’s healthcare system and the robust procedures in place. He expressed the view that of all countries globally, Taiwan has arguably been the most successful in dealing with Covid-19. Besides the healthcare aspect, Taiwan’s precautionary measures, such as observing social distancing, wearing masks and frequent hand-washing are now being adopted globally, although it is not clear if other countries are implementing them as well as Taiwan.

In his opinion, the United States was not properly prepared for the pandemic, especially in terms of testing. His friends were initially not able to have a test because they did not display very severe symptoms. Countries in Asia, on the other hand, had a much less steep learning curve. Habecker attributed this to the lessons learnt during the SARS experience in 2002-2003. SARS was a wake-up call for Taiwan, which authorities learned from by putting procedures and facilities in place. For example, after SARS, every hospital was required to install negative pressure rooms.

As to the Covid-19 outlook, Habecker said that most people he has spoken to have already cancelled their summer travel plans. Others still considering their options will have to weigh the risks of flying and whether it is worth the risk of travelling to places hit hard by the pandemic.

Habecker himself has gone back to work full time, although he still works from home wherever possible and tries to go out at odd hours, such as going grocery shopping and eating out late at night, rather than when places are more crowded. 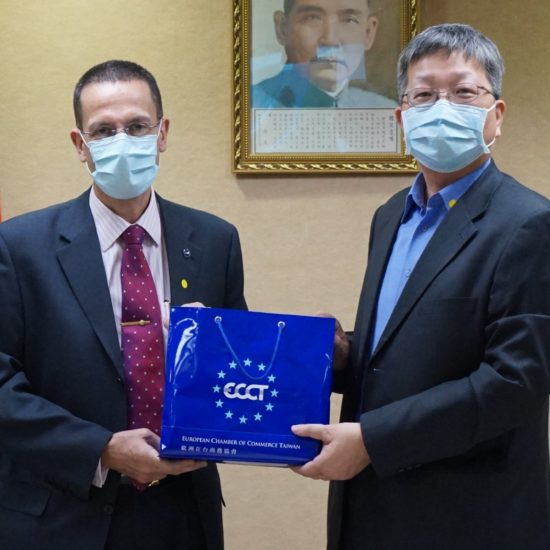 Meeting with the Bureau of Energy