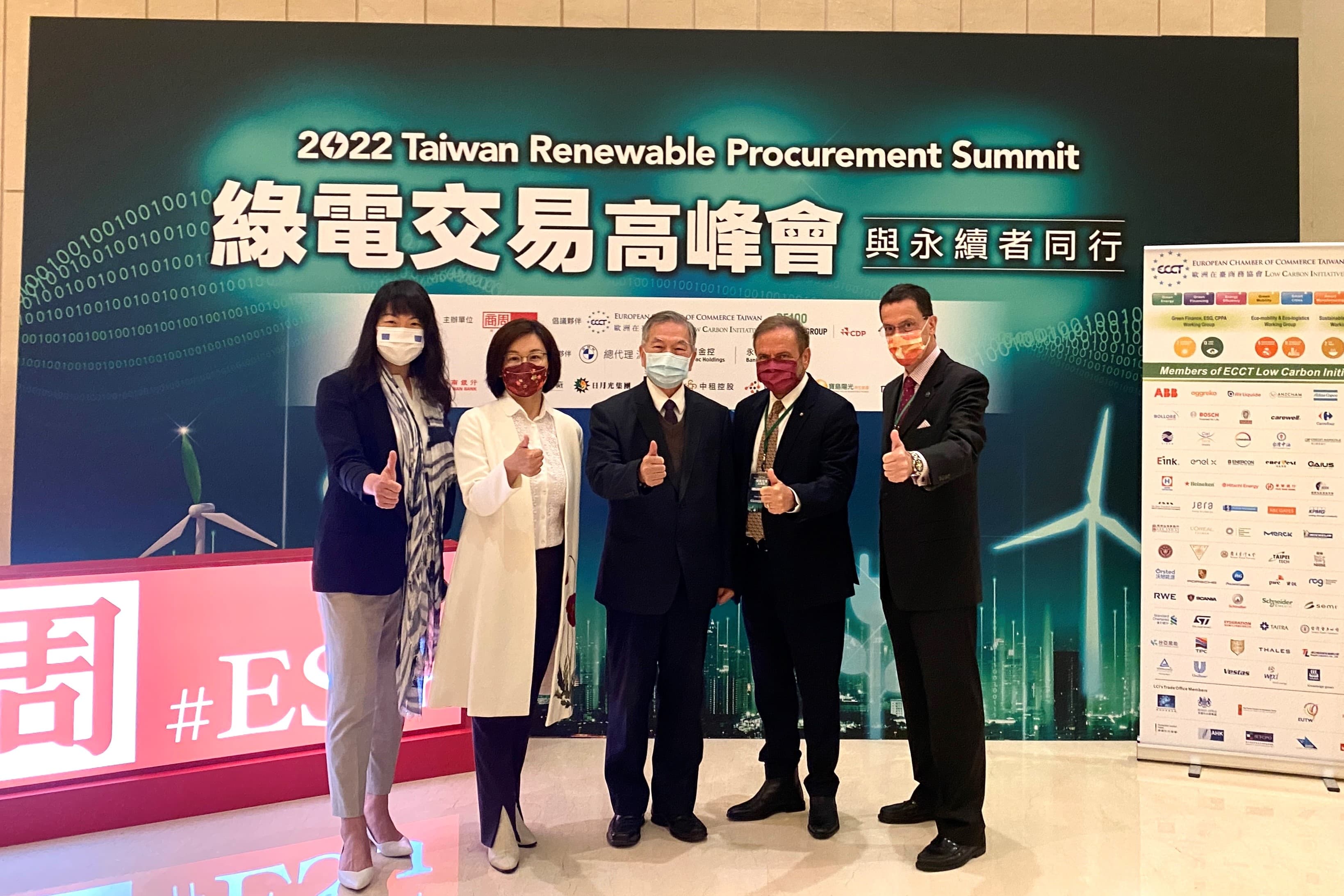 The 2022 Taiwan Renewable Procurement Summit was arranged by Business Weekly magazine in partnership with the ECCT's Low Carbon Initiative (LCI) and RE100. The full-day event was held in a hybrid format to bring together experts to share best practices and strategies to meet renewable procurement demands. This follows Taiwan's announcement on 30 March of a Net Zero Roadmap by 2050, and on 22 April of the Climate Change Response Act, which includes Taiwan's carbon fee mechanism, which sets carbon levies for emission sources. At the event, experts from Europe and Taiwan shared insights on barriers and opportunities in renewable sourcing, policies and case studies of supplying fair price renewable energy to SMEs. Tseng Wen-sheng (曾文生), Deputy Minister of the Ministry of Economic Affairs (MOEA) and ECCT Vice Chairman Giuseppe Izzo made remarks in the first session while Vice Premier Vice Premier Shen Jong-chin (沈榮津) made remarks in the second session.

Session 1 – Global trends of renewable energy transactions
In pre-recorded remarks, Sam Kimmins, Head of RE100, gave a short introduction to RE100. He reported that RE100 now has 360 members globally that are committed to getting 100% of their energy from renewables. 62% of members are headquartered in the Asia Pacific region, including 16 members from Taiwan. TSMC was the first semiconductor company to join RE100. It was also the first to sign a corporate power purchase agreement (CPPA) for offshore wind energy. Acer, ASUS, Delta, UMC, AUO and Merry Electronics are other large tech companies that have signed up. In Taiwan, RE100 has partnered with the Chung-Hua Institution for Economic Research (CIER) to provide advice and produce reports, including the RE100 2022 report. He said that policy makers are listening and taking action, including the Taiwan government, which has raised its renewable energy target.

In his remarks, MOEA Deputy Minister Tseng Wen-sheng spoke about the developing trends in renewable supply, volume, price and breakthroughs amid growing demand for green energy in Taiwan. He spoke about the ministry's plans to assign part of all green power generated in Taiwan to a retail market for small and medium-sized enterprises (SMEs). According to the minister, the MOEA will require both solar energy and offshore wind power producers to reserve a certain amount of their energy production for use by the retail market.

In pre-recorded remarks Giles Dickson, CEO of Wind Europe, spoke about renewable procurements strategies in Europe. While there are many models for facilitating renewables, the wind energy focus is on long-term corporate PPAs. About 10% of new wind farms were supported by PPAs in 2021.

He introduced the Renewable Energy Buyers Toolkit. It is an open-source tool, which provides critical information, especially for new players to help them enter the European market for corporate sourcing of renewable electricity. The tools in the kit are designed to help unlock the huge potential for corporate sourcing and make a real decarbonisation impact. Tools include a model contract, guidance on how companies can engage with wind or solar operators and developers and how they can aggregate as a group. Buyers benefit by locking in the price of energy at affordable levels for long periods while producers can secure more predictable revenues.

He noted that there has been a huge increase in PPA volume in Europe. Over 6GW of volume was added last year. Broken down by country, Spain has had the most PPAs over the past two years, and has overtaken Sweden, Norway and Germany in terms of volume. Two thirds of the volume in Europe is for wind energy. He added that there is considerable diversification of buyers and procurement models. The leading sector is ICT and the leading buyers are Amazon and Google, followed by aluminium manufacturers.

He went on to list the key enablers of PPAs: a good pipeline of projects is important and generators need to be able to sign bilateral contracts. Traceability is important, which is why energy certificates and certificates of origin are needed. Credit support is also crucial while underwriting is important for developers. Dickson noted that some large European companies are skipping PPAs and investing in their own wind farms. He listed BASF as an example, which has invested in offshore wind farms.

Denise Lee, Partner from McKinsey Taiwan, spoke about the global renewable energy boom. She noted that the change in the global energy mix is accelerating towards electricity from renewables and hydrogen. It is estimated that 80-90% of the world's electricity supply will come from renewables by 2050. While global energy consumption is still growing, the future trajectory will depend on a number of factors, including energy efficiency and the commitment to replacing fossil fuels with renewables. It will also depend on how the falling costs of renewables. In late 2020 the marginal costs of renewables could compete with fossil fuels in most countries. She went on to outline the energy situation in China, Japan. Mainland China plans to accelerate investment in renewable energy and its green electricity market continues to grow while Japan will vigorously develop offshore wind power and hydrogen energy to achieve carbon neutrality goals. Meanwhile regulators across the globe are actively promoting the green transformation of industries. Citing her survey of views of various stakeholders shows that companies are willing to pay a premium for green energy. Google's strategy, for example, began with carbon offsets but the company gradually became ever more aggressive in switching to renewable energy. By 2017, the company had procured sufficient renewable energy to match total demand of its operations. She concluded that green electricity procurement has different challenges in different markets, and enterprises need to consider suitable solutions according to local conditions.

Session 2 – Challenges and strategies for renewable procurement
Vice Premier Shen Jong-chin made opening remarks to kick off the session.

In his presentation Tsai Yi-tai, (蔡亦臺), Partner of PwC Taiwan, also the Leader of LCI Green Finance, ESG and CPPA working group began with an overview of Taiwan's green energy market, noting that Taiwan's renewable energy power generation exceeded 17.4 billion kWh in 2021 but that private renewable energy power plants only accounted for 15.5% of that. She reiterated a view expressed by the BSMI that the wholesale price of green energy will decline year by year and that green energy transaction volume will grow rapidly. She went on to describe some possible problems in green electricity transactions and how to address them.

In her presentation Yuni Wang (王雲怡), Chairperson of wpd Taiwan, spoke about the challenges and opportunities for enterprises of direct purchasing of renewable energy. Although 2020 was the first year to see green energy power transfer transactions, things have been moving slowly owing to a range of problems, including the difficulty in getting land, insufficient grid capacity, complicated permitting procedures, and the difficulty in getting financing, among others. Said that she hoped that the government can carry out reforms to increase the convenience of buying at a reasonable price. In addition to permitting issues, getting the support of community stakeholders is also very important. Many projects, for example, are held up by concerns that the noise from wind turbines are harmful to humans. However, no research conducted in countries like Germany, Sweden and Australia have ever shown any physical harm caused by turbines. Moreover, at a distance of 200 metres from a turbine, you will not be able to hear any sound from turbines. There are also problems with Environmental Impact Assessments (EIAs) and the time it takes to get approvals. Another problem is energy storage. Regarding fair pricing, Taiwan has got used to overly cheap electricity. As to what can be done, the speaker said that the government could simplify the review process and follow scientific standards for things like noise levels. She made the point that increasing the capacity of renewables is not just important to reduce carbon emissions but is also crucial if Taiwan is to transition to electric vehicles, which will require a lot more green electricity.

Session 3 – Renewable procurement mechanisms
In his presentation, Hsieh Han-chang (謝翰璋), Deputy Director General from the MOEA's Bureau of Standards Metrology and Inspections (BSMI) spoke about the status and prospects for the green electricity trading market. To promote the country's renewable energy development, the National Renewable Energy Certification Center was established in 2017 for green power transactions. Since issuing its first certificate in May 2017, the centre has issued 1.26 million certificates to green power producers in Taiwan, enabling them to trade their power on a green energy transaction mechanism inaugurated in 2020, or retain the electricity for self-use. The 1.26 million certificates were issued for the production of 1.26 billion kilowatt hours of electricity via renewable sources.

For its part, in order to assist buyers and sellers to match their needs the BSMI established a green electricity trading platform in 2020 and completed the first batch of transfer transactions in May of that year. However, many users have complained that they faced problems buying renewable energy.

The biggest problem is that large players have bought up all the capacity. In particular, of the 1.06 million certificates issued by the centre as of mid-February, about 910,000 certificates have been traded on the transaction platform with TSMC purchasing almost 900,000 certificates. For this reason, there is a plan to rent solar photovoltaic projects on public land, and enter a certain proportion of the installation capacity into the trading market, for which SMEs will be given priority. There are also other difficulties in using the platform, which the BSMI plans to address. The speaker also said that due to low wholesale prices in the auction mode of the next phase of offshore wind energy development, there will be an opportunity to provide the market with a large amount of renewable energy at affordable prices.

In his presentation, Chou Zhi-hong (周志宏), Chief Sustainability Officer from Delta spoke about opportunities and challenges of renewable energy in manufacturing, based on his company's experience.

Bart Linssen, Managing Director of Enercon Taiwan participated in the final panel discussion together with the speakers from the session and gave a presentation about Enercon's new turbine technology. In his presentation, he reported that 233 Enercon turbines in Taiwan have remained operating for more than 20 years without incident despite numerous typhoons and earthquakes. On the issue of noise, he noted that the noise level 100 metres away from a turbine is 50 decibels, which is the equivalent noise of an air conditioner or a refrigerator. The great advantage of onshore wind turbines is that they take up much less space than solar panels. It also takes just five days to install an onshore turbine. They also provide the cheapest form of green electricity available now. He noted that The Netherlands, even though it is a small, densely populated country like Taiwan, has much more onshore wind energy capacity installed than Taiwan by making use of areas along highways, in harbours and industrial areas. He concluded with his favourite slide showing how Heineken is using onshore wind to power its beer-making operations.

The event ended with a business matchmaking and networking session. 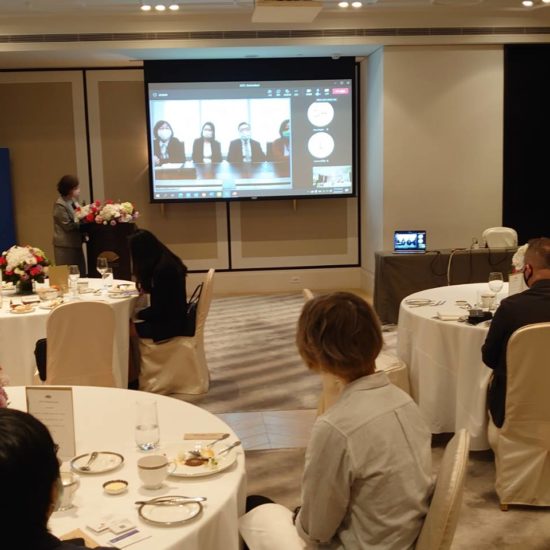