Progress made on 2019 Position Paper issues

Better Living committee
Equality of treatment for foreign nationals - Mandatory pensions: The Legislative Yuan has passed an amendment to the Labour Pension Act to include all foreigners with permanent residency in Taiwan in the country's retirement pension system. Prior to the amendment, the pension system covered only Taiwanese nationals, foreign spouses of Taiwanese nationals and certain categories of foreign professionals with permanent residency in Taiwan.

Equality of treatment for foreign nationals - Travel insurance: Foreign residents in Taiwan are now able to buy travel insurance when going abroad with the same level of coverage as Taiwan citizens.

Cosmetics committee
Timeline for the implementation of the Cosmetic Hygiene and Safety Act: In line with the recommendation in last year's paper, the Taiwan Food and Drug Administration (FDA) has allowed a two-year transition period for the industry to implement regulations related to oral care products.

Although not completely resolved, owing to sufficient progress made, the following issues have not been raised again in the 2020 Position Papers.

Asset Management committee
Relaxing restrictions on offshore funds’ investments in mainland China securities:
The investment cap for offshore funds registered in Taiwan to invest in China's onshore market has been lifted from 10% to 20% of their total assets. Moreover, the cap on qualified applicants has been increased from 30% previously to 40%. Given the fact that other recommendations made on this topic are the subject of ongoing discussions with regulators, the committee has not raised the issue again in this year's paper.

Green financing - Allowing insurance companies to invest in loans for the
construction and operation phases of green energy projects: Life insurers are now allowed to allocate funds to unsecured loans which are green financing related and guaranteed by Export Credit Agencies (ECAs).

Better Living committee
Safety and traffic - Bus safety: More bus operators are installing seat belts in their buses and the number of fatalities involving buses has declined. While the issue is not completely resolved, it has not been repeated in order to focus on issues of higher priority.

Smart cities - Optimising the quality of the smart grid: The committee's recommendations on standards have been included in the BSMI's 2019 priority list.

Retail & Distribution committee
Pesticide residue limits: The Taiwan Food and Drug Administration (FDA) has been working towards making the relevant procedures more transparent. The following issues were partially resolved (the government has taken action to resolve certain aspects of the issue but because other aspects remain unresolved, the issue is raised again).

Agro-Chemical committee
Transparent methodology and schedule for setting pesticide MRLs: In January 2019, the Ministry of Health and Welfare (MOHW) resumed the process of setting maximum residue limits (MRLs) on pesticides and established a "Pesticide MRL Inquiry System", which allows applications and submissions to be conducted online. However, the MOHW has not yet provided a definite schedule for MRL announcements while pesticide MRLs set by
authorities are often not consistent with internationally-accepted methods and the FDA's "Pesticide MRL Inquiry System" is not fully transparent.

Cosmetics committee
Recall implementation: The FDA has adopted the committee's proposal to establish a risk - based approach to regulate recalls based on the risk level. However, implementation is not fully aligned with international best practices and disproportionate to the level of risk.

Human Resources committee
Amendments to the Labour Standards Law (LSL) - Flexibility in the recording of
employees' working hours: Highly Paid Managers (employees who receive a monthly salary of over NT$150,000 and are in supervisory roles) were added to Article 84-1 of the LSL as a category of employees eligible for partial exemptions to the LSL. However, the LSL still requires employers to prepare and keep attendance records (accurate to the minute) on a day-to-day basis.

Insurance committee
Expanding the business scope of e-commerce for the insurance industry: The Financial Supervisory Commission relaxed regulations to allow a larger variety of products to be sold online. Notwithstanding this progress, the online application process is subject to overly strict security control requirements, limits third party payment options and does not allow the purchase of investment-linked products.

Regulatory issues - QSD registration: The FDA has acknowledged the need to create various Quality System Documentation (QSD) categories that allow companies to apply to reduce the duplication of required documents in order to simplify the QSD renewal and amendment application process. However, there has been no progress on developing new regulations to support the creation of new categories that would be needed to resolve the QSD registration issue.

Retail & Distribution committee
Transparency and consistency of government policies - Translations of Taiwan
standards and testing methods: The Bureau of Standards Metrology and Inspections
(BSMI) and the TDA have proactively responded to the committee's priority list and provided
either the English versions of standards and testing methods as requested or specific
timelines for completing the English versions.

Transparency and consistency of government policies - Improving the efficiency of
food import inspections: In response to the committee's recommendation, the Northern Center for Regional Administration of the FDA hosted a workshop to facilitate dialogue and exchanges among different stakeholders on food import inspections. However, some inspectors request importers to provide FDA explanatory letters, original statements from foreign suppliers without notice or do not accept digital versions of documents. Furthermore, due to differences of regulations, data rounding rules and nutrition data testing methods, or ingredient declaration requirements between countries, Chinese labels are not always 100% consistent with original labels and inspectors frequently challenge these differences and request details of formula/ingredients and original statements.

Technical barriers to trade for European food products - Sanitary and phytosanitary
and food safety approval process: Over the past year, the FDA and the Bureau of Animal and Plant Health Inspection and Quarantine (BAPHIQ) have announced a few market access openings for European food products such as apples from Italy and Poland as well as recognitions of the disease free status of several European member states, including the UK, France and the Czech Republic. However, other applications are pending approval, some for as long as 10 years.

Technical barriers to trade for European food products – Organic Agriculture
Promotion Act: The Organic Agriculture Promotion Act and its implementing rules entered into force on 30 May 2019. The committee welcomes the new regulatory framework and urges a smooth transition to the new regime.
Technical barriers to trade for European food products – Regulation of Foods for special Medicinal Purposes: The FDA has adopted the committee’s recommendation on extending current licenses for an additional four years to allow a reasonable grace period to prepare for new regulations. However, other issues under this topic remain unresolved. 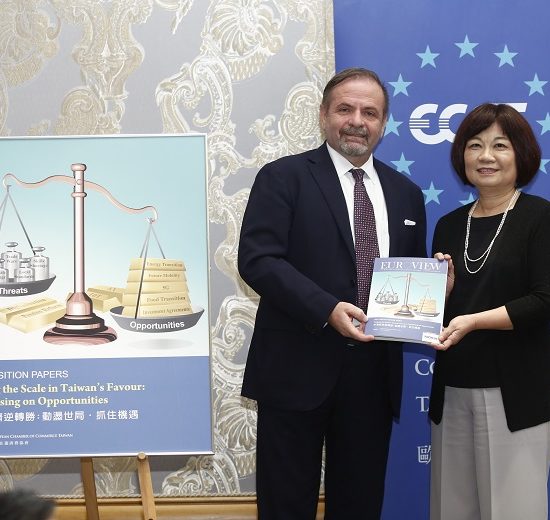 Launch of the 2020 Position Papers