For the event PPT, please click HERE
The ECCT's Better Living & Education committees joinly hosted a lunch on the topic "Making Taiwan a bilingual nation by 2030 - Setting goals and addressing the challenges". The event featured the following panellists: Fan Sun Lu, Political Deputy Minister, Ministry of Education; Connie Chang, Director-General, National Development Council; Tiffany Huang, Co-chair, Project & Procurement committee & Partner, Baker & McKenzie and Ailin Yang, General Manager, EF Education First. At the event, each of the panellists made remarks, after which they engaged in a discussion moderated by Tim Berge, Co-Chair of the Better Living committee & General Manager of ICRT.
In her remarks, Connie Chang noted that the objective of the government's blueprint for developing Taiwan into a bilingual nation by 2030 is to boost people's English proficiency in order to enhance Taiwan's international competitiveness.
The blueprint builds upon previous government plans to create an English-friendly living environment (introduced in 2002), to create an international living environment (from 2008-2009) and to enhance national English proficiency (from 2010-2012).
While not going as far as making English an official second language, the latest plan is nevertheless ambitious. What makes it different from previous plans, according to Chang, is that it focuses on the demand rather than the supply side.
It is recognised that better English language ability makes an already talented person more competitive to international employers. Increasing the overall level of English proficiency would also make Taiwan more attractive to foreign investors.
The eight major strategies under the NDC's blueprint are: making all official government websites bilingual, making official documents used by foreigners bilingual, providing bilingual frontline services in public settings, making the government's public data available in English, making laws and regulations that pertain to foreigners bilingual, promoting bilingual services in cultural and educational settings, training civil servants to conduct business in English, and making professional and technical licence exams available in English.
All government ministries and agencies will be developing policies and programmes under the blueprint. Chang stressed that, unlike in the past, where the focus was on passing written English language exams, the overall objective now is to help to make people more proficient in speaking by encouraging them to use English in all aspects of their daily lives. The government is employing technology to help meet its goals by creating an online platform for free English learning resources. Chang noted that close to 80% of the public in Taiwan support the government's English language policy objectives.
In her remarks, Tiffany Huang noted that the ECCT had long advocated making government procurement tender documents available in both English and Chinese. Although Taiwan is a signatory to the WTO's Agreement on Government Procurement (GPA), the GPA only requires summaries of tenders to be made available in English. However, not having the complete details and minutia of tenders and contracts available in English has deterred many foreign investors from bidding for public procurement projects in Taiwan. Therefore the NDC’s plans to standardise English terminology, make standard templates for contract documents, publish English notices and eventually English versions of tenders, is a welcome development.
In her remarks Deputy Minister Fan outlined some of the MOE's plans to meet the overall goals of cultivating bilingual talent and implementing bilingualism in Taiwan’s education system. The main strategies to meet these goals are to: 1) Adopt a dynamic teaching approach with a focus on daily English use; 2) Expand human resources required for English education; 3) Make effective use of digital technology and promote individualised learning; 4) Accelerate the internationalisation of the educational system to bring the world to Taiwan and 5) Relax current laws and regulations to allow for more flexible mechanisms so that new learning modes can be created.
Fan noted that in 2001 English language classes were introduced in schools for students starting in Grade 5. Over the years, this had evolved and now eight cities in Taiwan begin English classes in the first or second grade. However, the effectiveness of these classes is lacking, which is why new approaches are needed. In particular, as part of its new dynamic teaching approach, the MOE is looking at ways to integrate English into preschool caretaking activities, promote English as the Medium of Instruction (EMI) for selected subjects and develop bilingual teaching materials for subjects such as world geography, history, mathematics and natural science. In addition, the MOE will promote English for Special Purposes teaching and learning in vocational schools.
According to Fan, new curriculum components based on the new approach will be implemented starting this year and more resources are being allocated to train teachers for the new approach and new components. The MOE is also working on drafting changes to legislation that will allow foreign teachers to teach any subject and to allow local governments to set up bilingual schools, among other changes.
In her remarks, Ailin Yang lauded the government for the courage and vision of the bilingual nation objective, noting that bilingualism will give young people greater opportunities. She made the point that Taiwan has room for improvement in its English language proficiency, based on current rankings, and that the bilingual nation project needs to move ahead if Taiwan is to improve.
In response to a question regarding opposition that had recently been voiced about the bilingual nation project by some Taiwanese university students, Connie Chang said that the objective is not to replace or encroach on mother tongue skills or to burden students with more tests but to help them improve their English fluency, which will benefit their soft skills and job prospects. She made the point that most Europeans are able to learn and speak several languages and there is no reason why Taiwanese should also not be able to do the same. 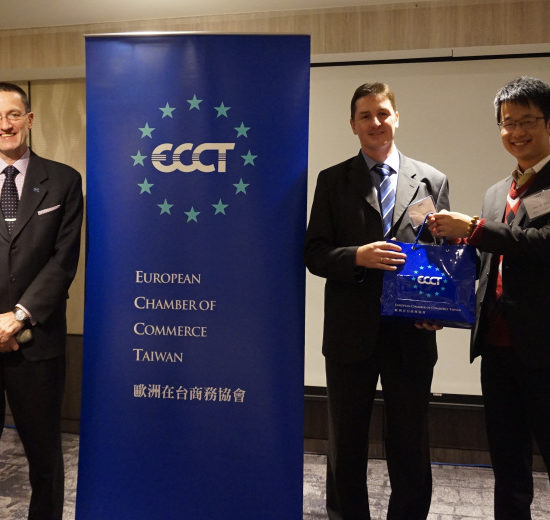