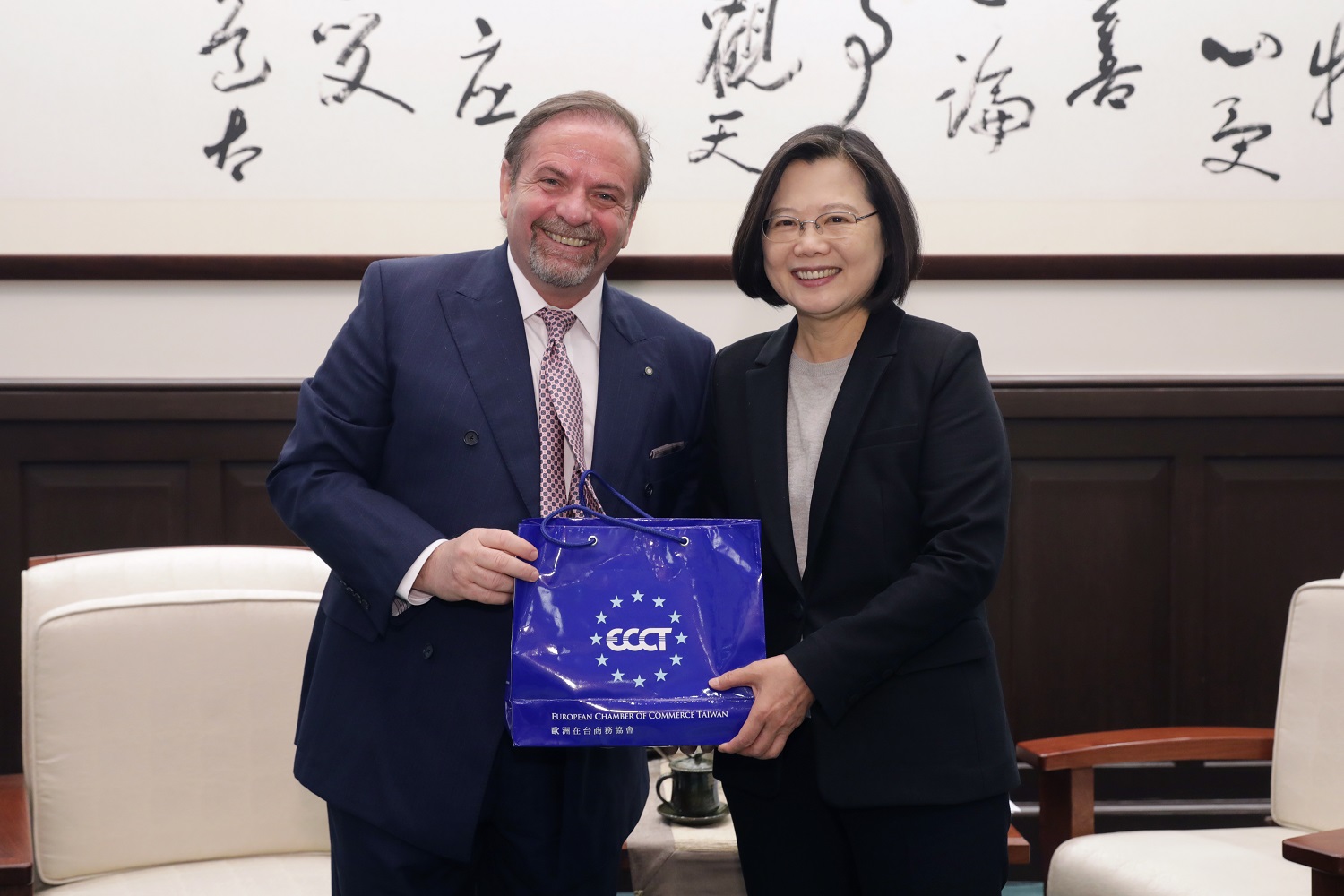 An ECCT delegation led by ECCT Chairman Giuseppe Izzo and CEO Freddie Höglund paid a visit to President Tsai Ing-wen at the presidential palace. At the meeting Chairman Izzo congratulated President Tsai on her recent election victory and briefed the president on recent ECCT activities and developments.

In her opening remarks at the meeting President Tsai acknowledged the ECCT's important contribution to Taiwan's economy, especially the significant increase in investments by European companies in recent years. In this regard, she made special mention of European investments in offshore wind energy and thanked the ECCT for its support of the government's efforts to develop renewable energy in Taiwan. Furthermore, she requested the support of the chamber's members to help speed up the roll-out of offshore wind farms in Taiwan to demonstrate the benefits of renewable energy to the general public, including reduced pollution and improved energy security.

President Tsai's sentiments on renewable energy were echoed by chairman Izzo in his remarks. He acknowledged the need for the government and industry players to work together to ensure the smooth and successful development of wind power and undertook to continue to work with the relevant government agencies to achieve this.

On the subject of a proposed EU-Taiwan Bilateral Investment Agreement (BIA), both the president and Chairman Izzo reiterated their support for a BIA. Given consensus on the part of the ECCT and the government that a BIA would help to boost bilateral investment and trade and create jobs in both the EU and Taiwan, they agreed to continue to promote the need for a BIA in their exchanges with EU authorities.

On the subject of health concerns over the spread of the novel coronavirus (2019-nCoV), President Tsai outlined some of the government's recent actions and plans to deal with the consequences, including healthcare precautions and market stabilisation measures. She also noted that Taiwan's exclusion from UN agencies such as the World Health Organisation (WHO) and the International Civil Aviation Organization (ICAO) raises the risks for everyone, especially during an outbreak such as the current one. In response, ECCT CEO Freddie Höglund reiterated that the ECCT has consistently supported Taiwan's meaningful participation in international organisations such as the WHO and ICAO.
Please click here to see the video.
Previous

ECCT reiterates call for Taiwan's participation in WHO and ICAO