Lunch with the Kaohsiung City Government 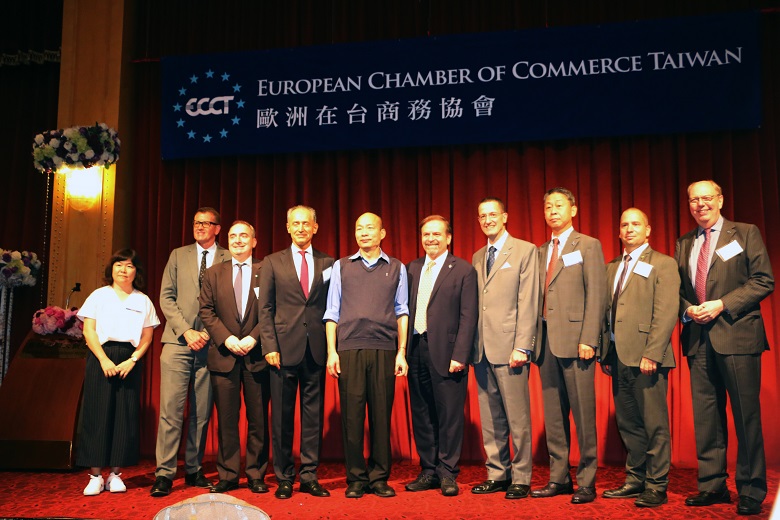 A delegation of over 100 ECCT members and guests, led by Chairman Giuseppe Izzo and CEO Freddie Höglund, travelled to Kaohsiung where they held a Premium Event lunch with Mayor Han Kuo-yu and senior Kaohsiung City Government (KCG) officials. At the event, Mayor Han gave a short speech in English, after which Fu Ho-chung, Director-General of KCG’s Economic Development Bureau, answered questions from members.

In his speech, Mayor Han acknowledged the importance of Europe in the world and welcomed European firms to start or increase their business in Kaohsiung. He later added that Kaohsiung would be a good stepping stone into other markets in the region.

On the subject of the English language environment, the mayor said that it is imperative that the next generation can speak good English. He reported that his administration had allocated an additional budget of NT$20 million for bilingual training to help achieve this goal.

Mayor Han also made a commitment to improve the performance of civil servants, saying that he wanted officials to adopt a service-oriented approach when dealing with the public, especially business people.

After the mayor had left, Director-General Fu and his colleagues answered a number of questions raised by members. Fu said he welcomed the suggestion by the ECCT’s Southern Taiwan committee to set up a single contact window between the KCG and the ECCT to resolve problems related to doing business in Kaohsiung.

On subject of expansion plans for the Kaohsiung MRT, Fu said that original plans to expand one of the city’s lines (the yellow line) were in the process of being modified. Fu also welcomed the ECCT’s recommendation to make government procurement tenders available in English.

On a question about inconsistencies in spelling of street names (due to the lack of consistent use of Pinyin), Jeremy Wang, Director General of the Department of Administrative and International Affairs, said that government is aware of the problem and plans to coordinate with the relevant officials to tackle it.