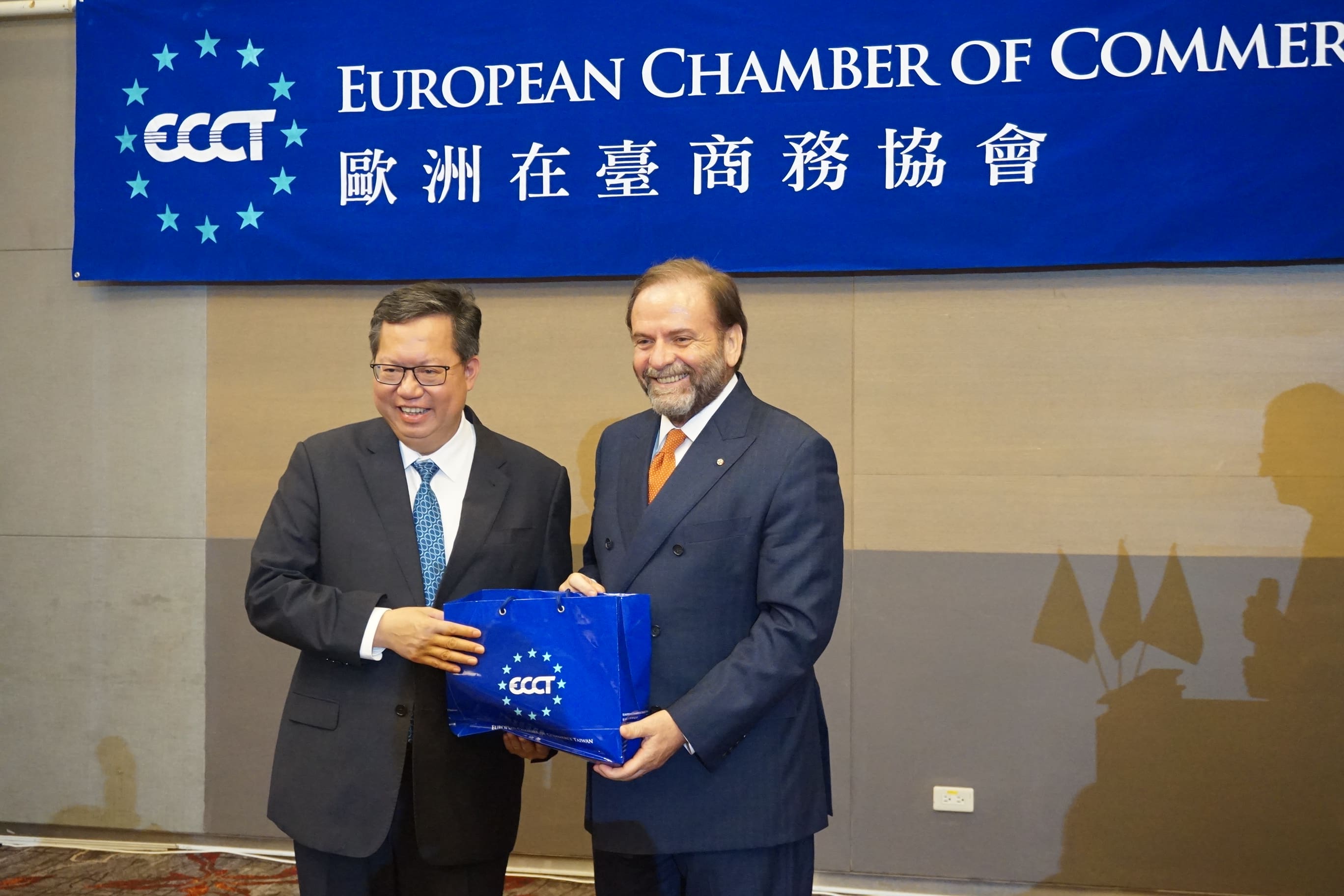 The ECCT hosted a Premium Event lunch with Taoyuan Mayor Cheng Wen-tsan and senior Taoyuan City Government officials. At the lunch, Mayor Cheng gave a speech on the topic "building a low carbon & sustainable airport city" and answered questions from members about doing business in the city. Also at the lunch, the ECCT signed an MoU with the city to formalise cooperation in the areas of talent cultivation, the establishment of green supply chains and eco-logistics development. The lunch was preceded by a meeting arranged by the ECCT's Low Carbon Initiative (LCI) and attended by city government officials and ECCT members. Topics discussed at the meeting included sustainable sourcing, developing the green supply chain, eco-mobility and eco-logistics in Taoyuan.

In his presentation, Mayor Cheng emphasised the benefits of investing in Taoyuan given its young and growing population (which has risen by 200,000 over the past six years), and attractive investment and living environment. According to the mayor, Taoyuan accounts for around 20% of Taiwan's total GDP and produces industrial output of €87 billion, about a fifth of Taiwan's total output. He said that the city was the first choice for returning Taiwanese investors (Taishang), who had, since the start of the government's investment incentive programmes initiated in 2019, already pledged to invest €6.7 billion and create an additional 20,000 jobs, both the highest levels in Taiwan.

According to the mayor, Taoyuan leads Taiwan in several major industry sectors: aviation & aerospace, logistics & warehousing, auto, electric vehicle (EV) and component manufacturing, green industry, IoT & ICT, smart medicine and smart textiles. The mayor added that Taoyuan has been a major centre in producing face masks and other personal protective equipment during the coronavirus pandemic, both for domestic use and export markets.

While the pandemic has decimated international air travel, the shipping of cargo has helped to keep Taiwan's domestic airlines and some 1,800 logistics companies operating in Taoyuan in business. Although passenger volume is down from around 130,000 to just about 2,000 passengers per day, the city is going ahead with plans to build a third terminal and a third runway at Taoyuan International Airport as well as periphery business developments that are part of the Taoyuan Aerotropolis project. The mayor reported that almost 300 hectares of land will be developed and available for investors in the project, which is targeting companies in six main areas: aviation and maintenance, warehousing and logistics, green industry, smart vehicles, biotech and medicine and cloud computing.

The mayor reported that Taoyuan was ranked No. 1 in sustainability in 2020 and is leading other cities in Taiwan in green energy and EVs. According to the mayor, solar energy capacity in the city has been increased by 50% over the past six years while Taoyuan was the first city in Taiwan to introduce an electric scooter sharing scheme, Gogoro's GoShare. Mayor Cheng added that all the city's street lights have been replaced with smart LEDs that can be monitored. Taoyuan also has the largest number of recycling businesses in Taiwan.

According to the mayor, Taoyuan has opened its Citizen Card scheme to foreign residents with Alien Resident Certificates. This entitles holders to discounts on public transport, access to gyms and to borrow library books.

Taoyuan has 32 industry parks and seven industry hubs for investors to choose from. To make life easier for investors, the city provides a one-stop investment service to investors to resolve all issues relating to setting up operations.

The mayor reported that Taoyuan is facing a severe water shortage this year owing to a lack of typhoons. However, the city has decided to stop regular irrigation for crops and instead offered compensation to farmers. Since the bulk of water is used by the agricultural sector, this measure means that there should be no water shortages for industry and consumers.

Foreign pensioners in Taipei to be given discounts