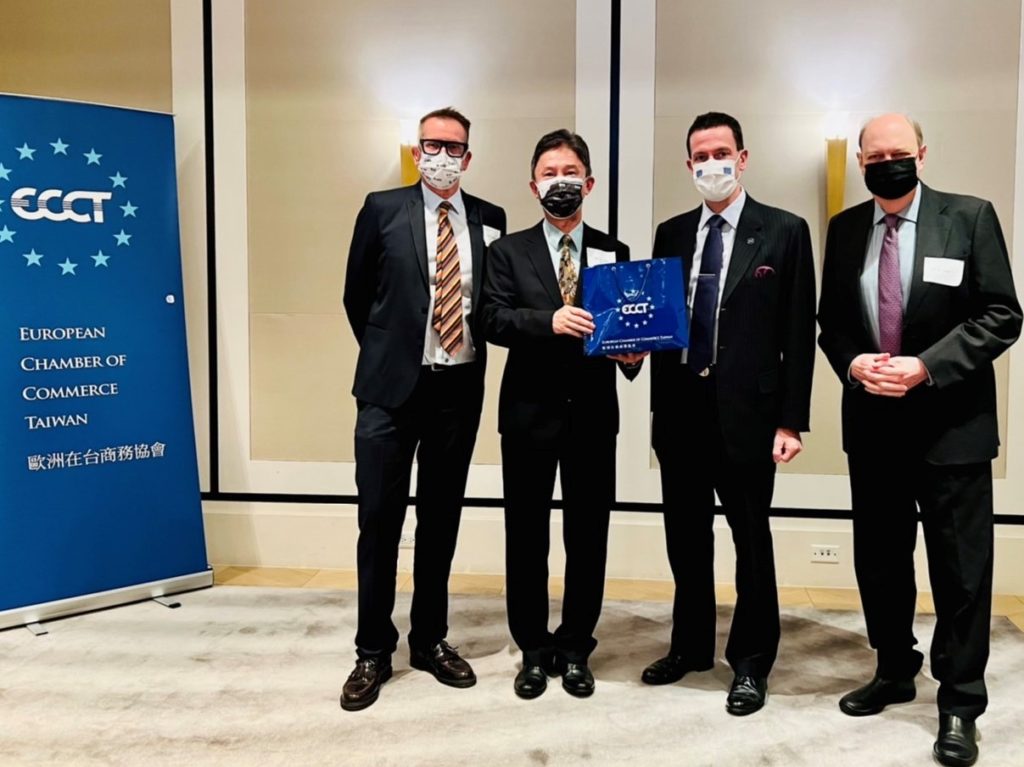 The ECCT's Better Living Committee hosted a lunch with Ambassador Tom TC Chou, Commissioner of the Mayor's office for External Affairs, under the Taipei City Government on the topic of Taipei's 2022 challenges & opportunities.

Chou began his presentation with an update on the Covid-19 pandemic situation. He noted that Taiwan had been a net beneficiary of the pandemic as global demand for products and components needed for the stay-at-home economy and digitalisation had boosted exports and overall economic growth, although it had hurt specific sectors like tourism, hospitality and group activities like sports and concerts.

He noted that it took six months for the first Covid-19 variant (Alpha) to peak, less for Delta and only two months for the Omicron variant to peak. Taiwan is in a reasonably good position given a high vaccination rate and mostly closed international borders. The ambassador said that 80% of Taipei City's residents had already had two jabs of the vaccine. He added that the city is also helping to reduce the impact of the pandemic by accelerating digitalisation.

As to the possibility of further loosening of border controls and other pandemic restrictions, Chou said that border controls and many other restrictions are determined at the national level, giving Taipei limited scope for flexibility. Chou also made the point that, unlike citizens in Europe and the United States, citizens in Taiwan tend to favour stricter control measures. Authorities at the national and local level have to therefore take this into account when deciding to change policies. That said, Chou said that he is optimistic that the trend towards gradual relaxation of restrictions will continue, as long as the pandemic situation remains under control. For example, although the health minister, Chen Shih-chung, has not yet confirmed it, he expects quarantine requirements to be shortened from the current 14 days to 10 days and, as long as the situation remains stable, a further reduction to seven and five days should follow.

The ambassador pointed out that the Taipei City Government had introduced a number of innovations during the pandemic, including the concept of quarantine hotels, which was a win-win for hotels struggling to survive given the dearth of tourists as well as authorities, since it saved them from building expensive quarantine facilities. The city also developed a contract tracing App and set up an English LINE group to keep people informed about pandemic developments. According to Chou, the group is now used for purposes beyond pandemic matters. He emphasised that data collected is depersonalised to protect privacy and is deleted after 28 days.

Chou went on to talk about culture and leisure activities in the city. He cited several international surveys which give Taipei high rankings as a place to live, work and do business.

Due to the pandemic, many activities have converted to a hybrid (live + virtual) format, including cultural activities and conferences, such as the smart city summit. The city welcomes opportunities to arrange joint events with foreign trade offices, institutes or business chambers. If events are deemed to be for the public benefit, the city offers venues free of charge. He said that 18 such events were held over the past year.

In line with global and national trends, Taipei aims to become carbon neutral by 2050. The city also has an interim target to reduce emissions to 30% below 2005 levels by 2030. According to Chou, emissions per person in the city have already fallen from five tonnes in 2005 to 4.3 tonnes in 2021 while air quality has improved over the past six years. As part of the city's efforts to decarbonise, the city's bus fleet of around 3,500 buses will be converted to electric versions by 2030. By the end of 2022, he said that the city will have 400 e-buses. The city will also continue to provide subsidies for electric scooters.

As part of its international relations efforts, the city continues to arrange activities with its sister cities. Due to the pandemic, virtual summits have been held over the past year.

In the Q&A session, speaking as a former national diplomat for the Ministry of Foreign Affairs, Chou said that diplomacy at the municipal level is also very effective and helps to complement Taiwan's national diplomacy efforts.