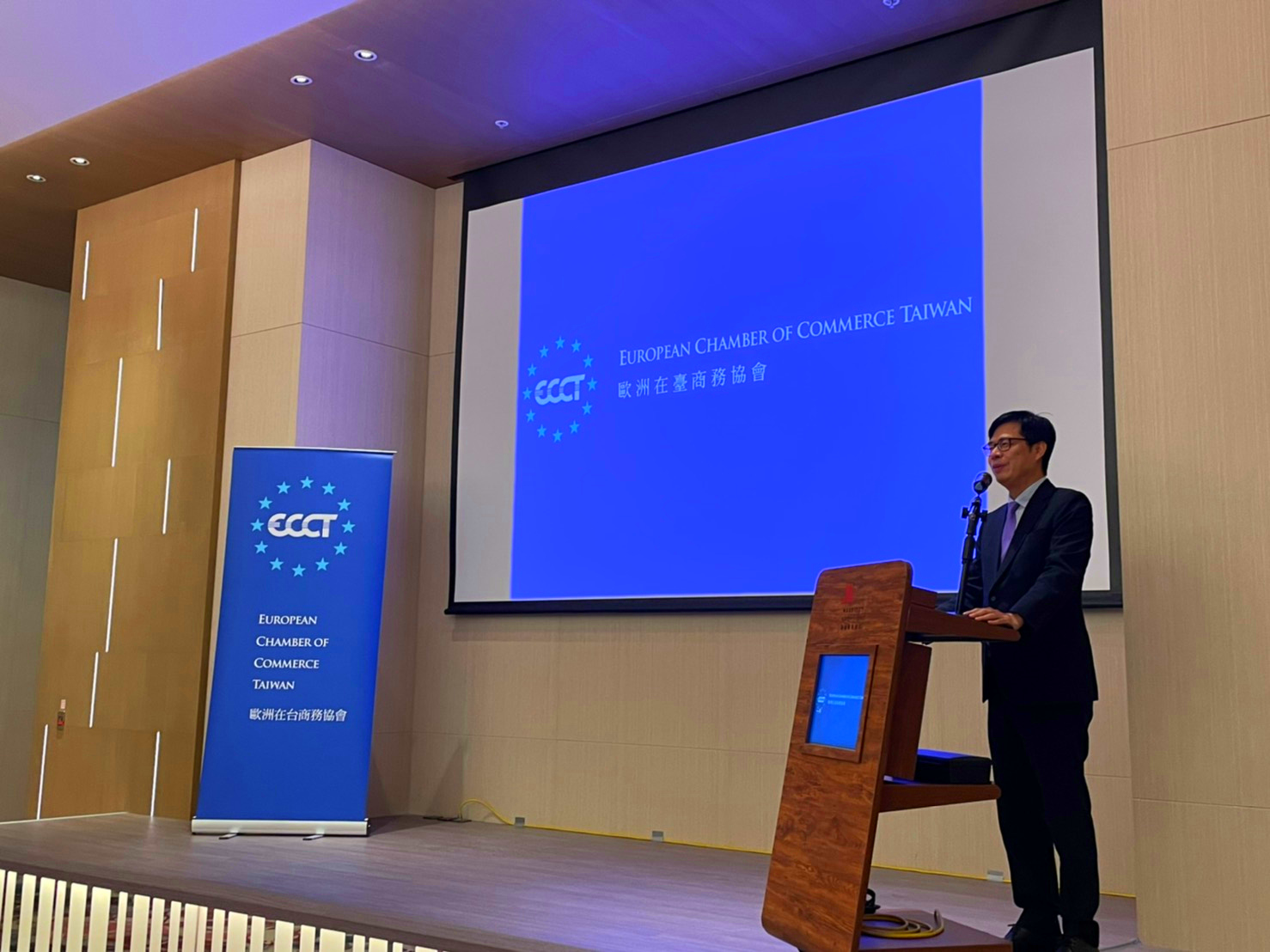 Kaohsiung Mayor Chen Chi-mai (陳其邁) made a compelling case for investing in his city to European investors at the ECCT's first Premium Event lunch with the mayor since he took office last year. The lunch was also attended by ECCT Chairman H Henry Chang, CEO Freddie Höglund, around 40 ECCT members based in or doing business in southern Taiwan and a delegation of senior Kaohsiung City Government officials. At the event Mayor Chen gave a short speech and answered questions from ECCT members in a Q&A session hosted by Tim Berge, General Manager of ICRT and co-chairperson of the ECCT's Better Living committee.

Following the lunch ECCT Chairman H Henry Chang remarked, "It was a very warm and interactive event, like the weather in Kaohsiung. Mayor Chen showed his enthusiasm for promoting business development and made a compelling case for investing in Kaohsiung, particularly the AIoT Innovation Park. He also demonstrated his commitment to developing Kaohsiung into a smart city and improving the quality of life for citizens and foreign residents, saying that anything Taipei can do, Kaohsiung can do too. I made the point that European expertise is aligned with his visions for Kaohsiung and we look forward to working together."

In his speech Mayor Chen made an enthusiastic case for European investors to invest in Kaohsiung's new industry parks, particularly the planned 5G AIoT Innovation Park. He noted investors can apply for tax incentives offered to businesses in science parks, export processing zones, and agricultural technology parks, along with bonded factories and bonded warehouses, and businesses in logistics centres and free trade zones. In particular, he mentioned the so-called "006688" land rental incentive plan, which is offered at the start of construction and operations. Mayor Chen said that, as a visiting scholar in London and time spent in Europe means that he understands Europe better than any other mayor in Taiwan.

Also, at the lunch, Liao Tai-hsiang, Director-General of the city's Economic Development Bureau (經發局廖泰翔局長) gave a presentation about the investment environment, industry overview, investment opportunities in Kaohsiung City and investment services provided by the city government. After the lunch, the ECCT's Low Carbon Initiative (LCI) held a meeting with Kaohsiung City Government's Deputy Mayor Charles Lin (林欽榮) and other city government officials to discuss green industry development in the city and how ECCT members can contribute.

In his presentation, DG Liao said that manufacturing of chemical raw materials, basic metal fabrication and electronic components contributed to more than 50% of Kaohsiung's economy while services and hospitality accounted for most of the rest. In terms of investments, Europeans account for 25% of FDI in the city, given large investments by companies such as Merck, Siemens and BASF. In traditional industry sectors, among other products, Kaohsiung produces 31% of Taiwan's national metal output, 24% of national petrochemical output, 52% of screw output, as well as 70% of domestic dental implants and 100% of domestic artificial joints. The city is also a ship-building and aerospace hub.

The speaker went on to introduce plans for future science and industry parks. The 5G AIoT Innovation Park in the Asia New Bay Area will be the largest R&D and innovation test field in Taiwan for the development of 5G video streaming and unmanned vehicles, among others.

The planned Ciaotou science Park will have a total area of 262 hectares and include five major industrial clusters: semiconductors, aerospace, smart machinery, innovative technologies and smart biomedical. Planning is scheduled to be completed this year and companies are expected to start site selection by December 2021 and be able to start factory construction by December 2022. Another park planned, the Renwu Industrial Park, will have an area of 48 hectares and focus on aerospace, machinery, metal fabrication, electric components and logistics.

The Invest Kaohsiung Office offers a range of services to businesses to connect them with the relevant government agencies to resolve investment difficulties, clarify issues and offer legal consultations.