The ECCT hosted a Premium Event lunch with the Institute for Biotechnology and Medicine Industry (IBMI) on the topic of Taiwan’s biomedical technology and digital innovation development featuring guest of honour, Dr Simon Chang, chairman of IBMI and guest speaker, Dr Chien Chung-liang, CEO of IBMI. At the event, the guest of honour and speaker gave an introduction to IBMI's history, its role in Taiwan’s biotechnology development and insights on Taiwan’s healthcare eco-system.

In his remarks, Dr Simon Chang said that IBMI has been working since it was set up in 2002 to promote collaboration between academia and the bio-industry in Taiwan. It is now also working to promote partnerships between local and international players. In this regard, he mentioned that the IBMI recently launched its international "Taiwan Healthcare+" platform, a website portal for medical and biotech opportunities in Taiwan.

While IBMI initially focused on pharmaceuticals and medical devices, it has evolved to include more sophisticated technology and services, such as gene diagnostic solutions that can, for example, test whether or not someone has the gene linked to Alzheimer's disease.

One of IBMI’s functions is to make policy recommendations to the government. According to Chang, IBMI has been successful in persuading the government to adopt many of its policy proposals. In his presentation, Dr Chien Chung-liang said that IBMI has a wide range of interests represented among its 380 members, including research (such as Academia Sinica and ITRI), government (the Ministry of Health and Welfare, MOHW, the Taiwan Food and Drug Administration (FDA) and the Ministry of Economic Affairs, MOEA), medical institutes and industry (from the biopharmaceutical, ICT, health ICT, medical device and health supplement sectors). The IBMI's Policy Think Tank has given proposals for important legislation such as the Act for the Development of Biotech and New Pharmaceuticals Industry, the Cross-Strait Cooperation Agreement on Medicine and Public Health Affairs, the Human Biological Database Management Act, the Pharmaceutical Affairs Law and the Medical Care Act.

IBMI’s Symbol of National Quality (SNQ) certification system is highly regarded. IBMI also holds National Innovation Awards and supports start-ups through a Biomedical Angel Fund. IBMI was instrumental in promoting the Taiwan Biotech Take-off Action Plan (from 2013-2016). According to Chien, this involved considerable cross-industry/government/academia cooperation. IBMI encouraged the government to go beyond its mandate of providing healthcare to also supporting basic R&D at research institutes, helping to commercialise medicines and devices and promote clinical trials in Taiwan. IBMI also persuaded the government to invest more in cloud-based healthcare management services and making better use of more than 20 years of data collected by national healthcare authorities in the form of medical records and images.

Chien noted that many of Taiwan’s leading ICT players are diversifying into the healthcare industry. While they used to supply just traditional hardware solutions, many of them are now developing a whole range of sophisticated equipment, devices and complete integrated, smart hospital solutions, which they are selling to countries including China, Malaysia, Thailand, Vietnam and Indonesia. Given Taiwan’s healthcare system and ICT supply chain and Europe’s expertise and talent, Chien said that there are great opportunities for European and Taiwanese companies to team up. 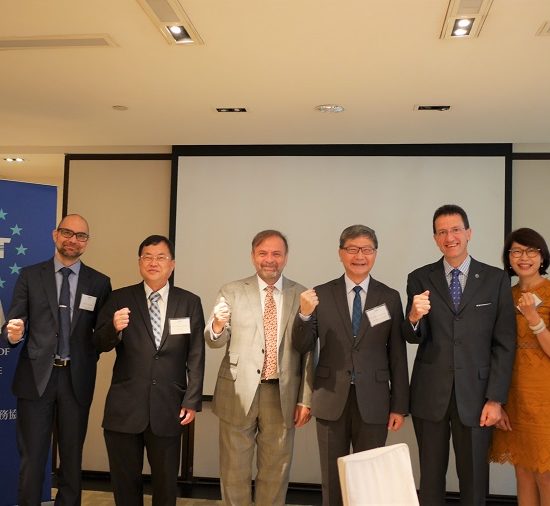