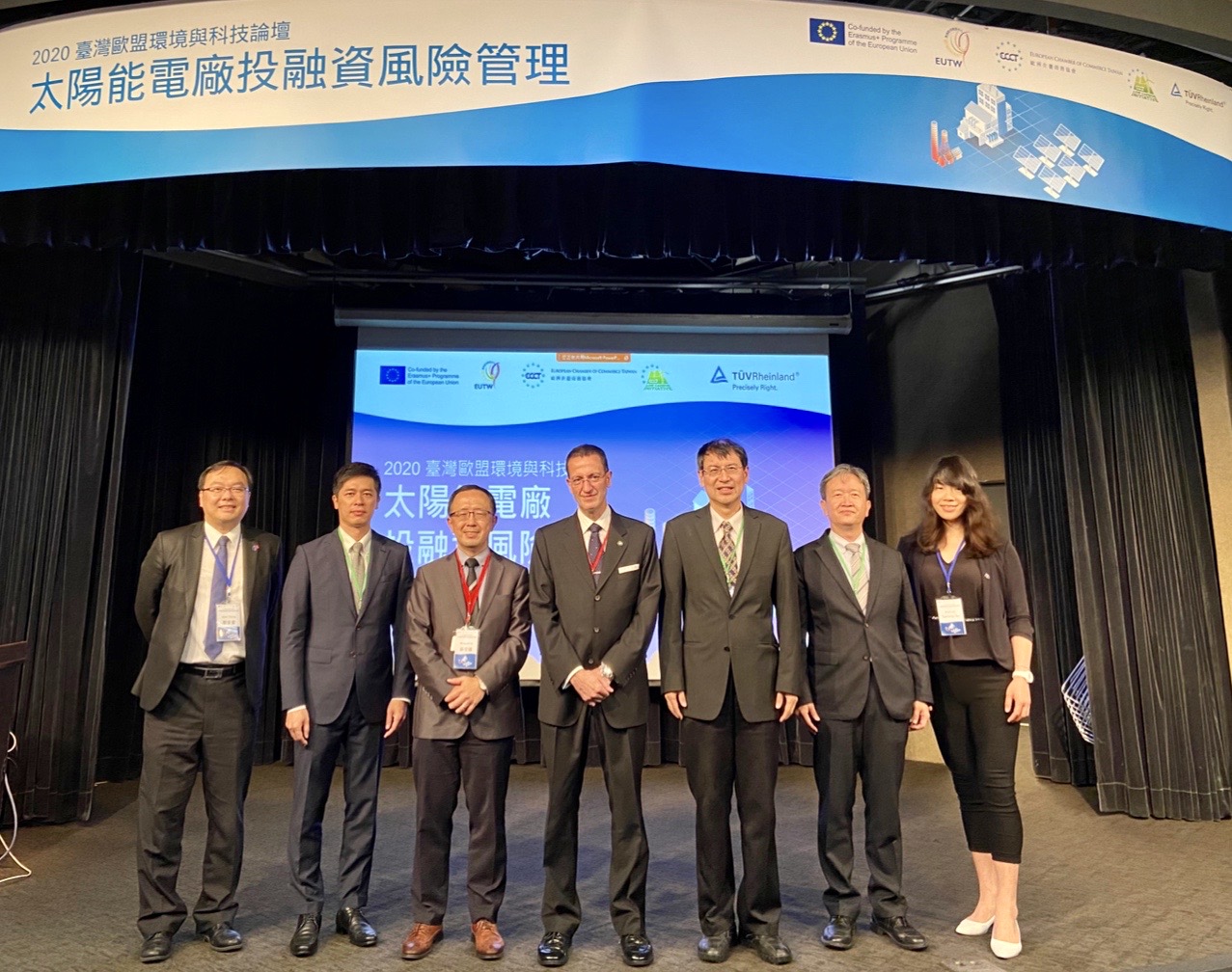 The ECCT's Low Carbon Initiative (LCI) organised a forum on the topic "Risk management in solar financing - Due diligence and bankability" in conjunction with the EU Taiwan Centre and TÜV Rheinland.

In his presentation Lin Tze-luen spoke about renewable energy trends in Taiwan. He cited the World Economic Forum's Global Risk Report 2019, which ranked extreme weather events, failure of climate change mitigation adaptation efforts and natural disaster as the most serious risks facing the planet and the global economy. The COP21 talks in Paris in 2015 set a target of keeping global temperature increases below 2 degrees Celsius. In the same year, the United Nations' (UN) General Assembly adopted the 2030 Agenda for Sustainable Development that included 17 Sustainable Development Goals (SDGs) including Goal 7 (Affordable and clean energy) and Goal 13 (Climate action).

The use of renewables is increasing steadily. The International Energy Agency (IEA) predicts that while the proportion of fossil fuels in the energy mix will decline, it will still account for 49% of the total mix by 2040 while renewables will increase to about 41.5%. Given the fact that Taiwan still relies on imports for most of its energy needs, it is a matter of national and energy security that Taiwan increases the use of renewables.

According to Lin, as of the end of 2019, the total installed capacity of renewable energy reached 7.796GW, an increase of 2.537GW compared with 2017, of which solar photovoltaic capacity rose the most. While renewable energy accounted for 5.62% of the total generating capacity in 2019, it is still well short of the government target of 20GW of installed capacity and 20% of generating capacity by 2025.

There are still some market mechanism issues to resolve. At present, companies needing renewable energy, must negotiate with producers. However, some successful agreements have been reached and there has been some use of green energy trading whereby producers can sell green energy certificates.

However, other issues still need to be resolved including setting up integrated smart grids connected to renewable sources as well as installing sufficient energy storage facilities.

In his presentation, Wang Yao-ting spoke about Taipower's renewable energy action plan and green electricity strategy. He explained how the government's ambitious renewable energy targets together with reforms and simplification of the administrative process, is helping to increase the use of solar power in Taiwan. For example a single contact window and regular communication platform meetings have been held with industry in an attempt to resolve difficulties.

However, more needs to be done in this regard. For example, given that much of the government's targeted capacity will be in the form of ground-based solar arrays, government assistance is needed to find and enable the use of suitable land. There are also some administrative difficulties, a lack of grid capacity and charging standards. According to Wang, there are already plans to strengthen the grid, expand existing substations and develop new ones.

To address the land shortage issue, Taipower is promoting the better use of existing resources and multi-use options, such as using farm and factory roofs for solar arrays. Taipower is also giving priority to the use of renewable energy and working with municipal governments to accelerate the integration of renewable energy into the grid. Taipower is also acting to address the integration of electric vehicle charging infrastructure into the grid.

For lenders to have confidence in the bankability of their projects, they need to be sure that permitting and regulations are fulfilled, there is a working financial model (with viable project parameters), projects are commissioned on time, that they are of high quality (in terms of design, construction and operation) and that there are adequate warranties.

He went on to outline the risks at every stage of the project from development, to engineering, procurement, construction, commissioning and operations. For example, in the construction phase, 30% of power plants end up showing serious defects (including safety issues) and more than 50% of defects are caused by installation errors. This is why construction monitoring and inspections are important.

The speaker went on to list some of the important legal risks including to be aware of during due diligence including company organisation, important assets, important contracts, major disputes, labour issues, environmental protection issues, markets and regulations, licensing issues and land acquisition issues. Participants also need to be aware of the conditions of power purchase agreements with Taipower. For example, Taipower has the right to terminate agreements in the event of license revocation, dissolution, liquidation, bankruptcy as well as other instances. She concluded by stressing the importance of due diligence to detect and deal with legal risks associated with solar power plants.

In her presentation Winnie Wang, Deputy General Manager for Energy Business Services at PwC Taiwan shared in-depth information about the examination and supervision of project financing. She outlined the various types of financing options and the benefits and risks of each.