Launch of the 2019 Position Papers 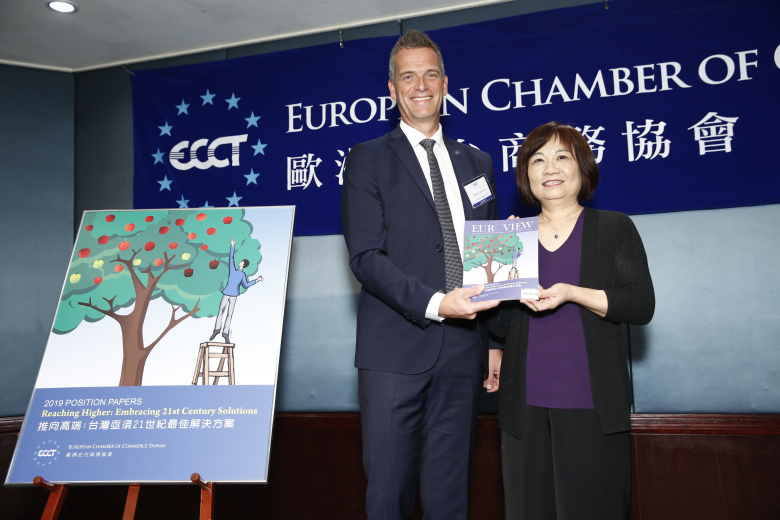 The ECCT’s 2019 Position Papers were officially released at a Premium Event lunch. A copy of the annual publication was officially handed over by ECCT Chairman Håkan Cervell to the Taiwan government, represented by Chen Mei-lin, Minister of the National Development Council (NDC). The event was also attended by around 120 guests, including board directors, committee chairpersons, European trade office representatives and other ECCT members. A summary of the main theme and overview were presented at the event by Cervell. Following the lunch, the papers were released to the media at a press conference, which was attended by around 25 journalists from print, television and online media groups. Under the theme “Reaching Higher: Embracing 21st Century Solutions”, the papers call upon the government to create the best conditions for the economy to thrive in the modern 21st century economy by aligning the regulatory system with international standards, updating outdated legislation and embracing the best technology and solutions to resolve difficult problems. The publication includes separate submissions from 24 of the ECCT’s 30 industry and support committees and raises 148 issues, 93 from previous years and 55 new issues.

In his presentation to NDC Minister Chen and ECCT members at the launch, Chairman Cervell congratulated the government on making progress on 22% of the issues raised in the 2018 papers, noting that this was the highest level of progress in four years. One of the major issues resolved for the ECCT’s Better Living committee follows a decision by the NDC and the Ministry of the Interior (MOI) to change the number formats used on Alien Resident Certificate (ARC) and Alien Permanent Resident Certificate (APRC) identity cards. The lack of compatibility of the format with that of ROC ID numbers has for years denied ARC/APRC holders access to many services, such as online commercial services. The issue has been listed in the Better Living committee’s position paper since 2009. “The resolution of this issue comes after many years of advocacy by the ECCT and marks a significant step forward towards ensuring fair treatment of foreign nationals”, Cervell said.

The chairman went on to say that the government has made great progress towards improving Taiwan’s regulatory environment in recent years. As illustrated by the image of an apple tree on the cover of the position papers, where all of the low-hanging fruit has already been picked, Cervell explained that the government has solved most of the easy issues. However, Taiwan’s regulatory environment is still not fully optimized to meet the needs of a modern economy. For example, many of Taiwan’s regulations are not aligned with international standards, are outdated or are not fit for the purposes of future development. If Taiwan is to succeed economically in the 21st century, it needs a modern and dynamic regulatory system that is appropriate for the 21st century. Such a system needs to be fully aligned with international standards, be adaptable to changing technology and industry trends and be flexible enough to enable the development of new industry sectors. However, reaching the high-hanging fruit – the most advanced and appropriate solutions for Taiwan’s future development – will require a great deal more effort, he said.

In his presentation, Chairman Cervell highlighted the fact that Taiwan is facing multiple challenges. It has one of the world’s most rapidly-ageing populations. In addition, traditional industries are facing fierce global competition and disruptions to traditional business models caused by technological advances. To deal with these and other challenges and to remain dynamic and competitive, the best solutions need to be adopted. If Taiwan is to continue to thrive, it needs to move up the value chain and develop the industry sectors that will thrive in the 21st century. The development of new industries requires an enabling regulatory environment that encourages innovation. To achieve success in the 21st century economy requires adopting 21st century solutions. The overview of the papers recommends a number of solutions under the headings: International standards and best practices; Appropriate regulations for the 21st century; Solutions for the green economy; Solutions for an ageing society; Solutions for attracting and retaining talent and Solutions for the English language environment.

The overview concludes that the government has demonstrated a will to tackle difficult problems and made great progress in resolving some of the difficult issues facing business. The low-hanging fruit has been picked. Yet, just as the high-hanging fruit is the ripest and juiciest, the best solutions for the 21st century, while difficult to reach, promise the greatest benefits. Now, the difficult task ahead is to reach higher and embrace the best solutions – only the ripest and juiciest fruit – for Taiwan’s future. Embracing and implementing these solutions, as set out in the ECCT position papers, would produce multiple benefits for the economy and ultimately lead to greater economic and social prosperity.

NDC response
After receiving a copy of the papers, NDC Minister Chen Mei-ling gave a short speech in which she thanked the ECCT for its support in the form of investments and recommendations made in the position papers over the years. She went on to list some of the government’s major reform efforts over the past year. This included 388 cases of deregulation of rules and administrative orders. She also explained changes to the ARC/APRC number format to bring them in line with ROC IDs, saying that the numbers 7, 8 and 9 would replace letters in the current ARC/APRC number format to denote gender. The process will soon begin to coordinate among the ministries affected and update their various systems and this is expected to be completed in the first quarter of 2019. After this, ARC/APRC holders will be able to apply for new cards. On the subject of labour law, a proposal has been drafted to exempt senior managers from the strict requirements of the labour law, which the minister hopes to be finalised by the end of the year. On the subject of the English language environment in Taiwan, the minister said that the premier had set a goal for Taiwan to become a “bilingual homeland” by 2030. To meet this goal, the NDC is in the process of preparing a blueprint, which it plans to finish by the end of the year. The minister also mentioned that the government has held talks on the digital economy, data flow and other ways to cooperate on digitalisation with its European Union counterparts. In answer to a question during the Q&A session, Minister Chen said that Taiwan would adopt EU regulations on electronic identification and trust services for electronic transactions in the internal market (eIDAS) in 2020. eIDAS provides a predictable regulatory environment to enable secure and seamless electronic interactions between businesses, citizens and public authorities. Adopting eIDAS is a recommendation made in the Technology committee’s 2019 position paper.

Press conference launch
Immediately following the lunch, the position papers were released to the media at a press conference. The press conference was hosted by ECCT Chairman Cervell and CEO Freddie Höglund and attended by committee chairpersons from the ECCT’s Asset Management, Automotive, Banking, Better Living, Cosmetics, Electrical Engineering & Equipment, Healthcare Enhancement, Human Resources, Project & Procurement, Retail & Distribution, Telecom, Media and Content and Wind Energy committees. At the conference Chairman Cervell began by giving a brief summary of the 2018 Position Paper theme and overview, after which committee co-chairs gave short briefings on some of the main issues facing members in their various industries. Around 30 journalists, representing all of Taiwan’s major Chinese and English language newspapers were present as were broadcast and online media representatives. After a briefing of the main position paper issues, the floor was open to questions from the media, which were fielded by the chairman and CEO. After the Q&A session many journalists remained behind to talk to ECCT committee representatives in person.