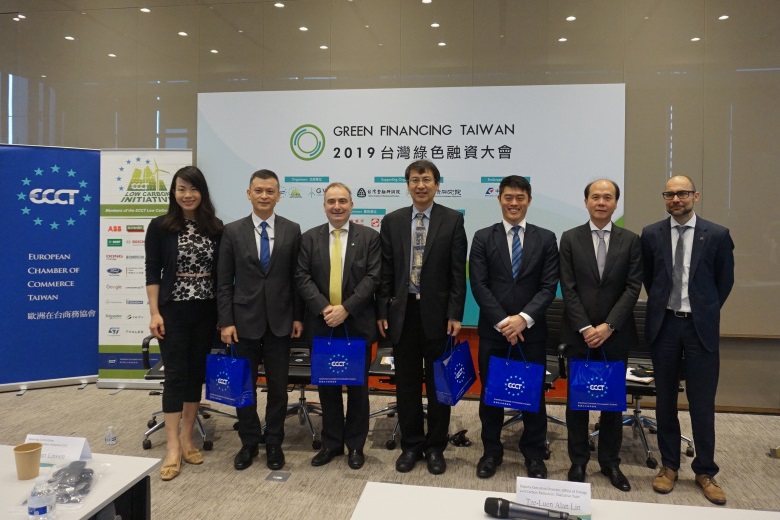 The ECCT's Low Carbon Initiative and the Global Wind Energy Council (GWEC) hosted the Green Financing Taiwan Forum. The half day forum was the third in a series of three events that were part of the Global Offshore Wind Summit held from 24-26 April. At the forum, the guests of honour gave opening remarks after which experts discussed some of the financing challenges and opportunities related to the development of wind energy in Taiwan. Among other subjects, they covered Corporate Renewable Power Purchase Agreements, renewable sourcing and financing aspects of power project contract structures.

In his remarks Bart Linssen said that Corporate Renewable Energy Sourcing has the potential to become a major source of financing for wind and other renewable energy sources globally. Meanwhile the success of the community-owned wind farm concept in Europe offers a great example for Taiwan to follow. Allowing ordinary citizens to invest in actual wind energy projects makes them real stakeholders with a vested interest in supporting development while providing sustainable energy and income.

In her remarks, Chiao Li-ming made the point that corporate renewable energy sourcing is a global trend that has not yet taken off in Taiwan. For this to happen, and to attract corporate and community investment in renewables, requires the right regulatory framework, business models and incentives, issues that were not covered by the main programme of the previous day’s Global Offshore Wind Summit.

According to the speaker, 2018 saw more corporate PPAs than in every year prior to that combined.

Deal sizes, which have been getting increasingly bigger until now, will get smaller after the large corporations that are part of the RE100 group, that have pledged to derive all of their energy requirements from renewable sources, have achieved their renewable energy objectives. Until now, technology companies have been the PPA leaders, enabled by their large cashflows and motivated to meet their CSR pledges. They were also in the fortunate position of being able to afford to pay for quality rather than prioritising getting the lowest price. Utilities don’t like PPAs because it takes business away from them.

The top 10 PPAs have been dominated by tech companies like Facebook, Google and Amazon. Fifteen of the RE100 already have PPAs. Once all of them have deals in place, the deals will get smaller in order to cater to smaller companies with lower energy requirements. This will change market dynamics. Big players have no problem getting debt but smaller players may need to deal brokers that can aggregate the needs of a number of smaller players to increase bargaining power. Smaller companies will also be more concerned about getting attractive prices.

A lot of projects in Australia have more than one PPA. Customers want high leverage and low interest rates but banks and institutional investors want a predictable revenue stream. Low auction prices come with 20-year PPAs, which is difficult for local players to adjust to.

The PPA market is not homogenous or unified and is unlikely to become so in the future, according to the speaker. There is no standardised PPA document – they all have to be negotiated individually. It is a challenge to manage the costs and there is also no public information on whether or not the pricing is good. There is also no magic formula as to how to spread and balance risk. However, corporate PPAs can still be attractive if they are priced properly.

The speaker introduced his company’s offshore wind projects, noting that Northland had also participated in the auction process, which followed the allocation projects based on allocation with FITs. Auction prices were very low.

The corporate PPA concept is still a very new and fluid. The exact implications of legislation that was passed on 12 April and the precise form and scope of supporting regulations still to come, remain to be seen. The Taiwan Renewable Energy Certificate (TREC) market is being created to allow large users to purchase energy from suppliers. Google has taken the lead in signing an agreement.

Taiwan will require the largest energy users to sign PPAs but the exact minimum requirement for purchasing renewable energy or what penalties will be imposed for failure to comply are not yet clear. What is clear is that it will affect demand. Either users will buy energy directly or purchase TRECs. In principle, a TREC is a tradeable instrument but it is an artificial/synthetic instrument that only specifies how much renewable energy has been produced and is not tradeable outside Taiwan.

A certification process has been set up. If a company generates renewable power it qualifies for TRECs. Generators could sell TRECs into a market, which already exists but volume is currently very small. In the future, once the law is settled, the market could become robust (some analysts are optimistic). However, at present TREC’s can only be sold once (there is currently no secondary market in Taiwan).

There are broader implications for the renewable energy market. For example, RE100 companies are influencing companies in their supply chains. Solar projects will help smaller firms get renewable energy. There are also things that need to be worked out. For example, the relationship between developers and Taiwan Power Company (Taipower) could be problematic when it comes to who should pay the cost of grid infrastructure for renewable energy projects and who should pay wheeling charges. There is also the question of balancing power supply and demand given the intermittent nature of renewable sources.

The speaker introduced his company and its products. TCI is a contract manufacturer which has joined RE100. The speaker acknowledged that delivering on the commitment is a challenge which it is working to achieve through self-supply, RECs and PPAs. The company’s factories and warehouses in use produce some energy through solar panels, although this is not enough to meet its needs. The size of the TREC market is also currently tiny. According to the speaker, even if TCI purchased all of the TRECs available, it would only cover 20% of its energy requirements.

This is why TCI is also pursuing PPAs. The company has signed an MOU with a solar developer and also plans to do the same with Taipower. It is also working to upgrade its buildings in order to increase energy efficiency.

The speaker admitted that it will be very expensive to reach its RE100 commitment but that going green is not just a CSR but also a competitiveness issue. However, the large drop in the costs of solar panels will continue to make solar energy more affordable. High FITs make it simple and profitable to sell power to but expensive to buy solar energy from Taipower. Having your own panels can actually reduce out of pocket costs. For small companies, it is difficult to buy power from developers and to compete with big companies for limited capacity. Therefore it may be better to form partnerships with other companies.

On a question as to whether RECs will be replaced by PPAs, speakers said market prices will fluctuate based on supply and demand and that local governments could set penalties for failure to meet renewable energy requirements, which would help to support the market. In addition, stability can be maintained by setting price floors or other market stability mechanisms.

Panellists noted that in Europe last year €10.3 billion of financing was raised for offshore wind energy capacity. The bulk of this was through limited recourse project financing from a diversified group of lenders including commercial banks, multilateral banks and insurance agencies. Financing requirements for Taiwan will be substantial – about three quarters of what was raised in Europe last year. Banks will have to assess the risks on a project basis, taking into account not only the quality of developers but also other criteria. At present, life insurance companies can only lend on a fully secured basis.

Financial institutions can support the process but they need to learn how to evaluate the risks of renewables, including solar, onshore and offshore wind and hydro projects. The challenges include estimating the construction risk and the predictability of revenue given the fluctuating nature of wind. The issue of insurance is also important, especially given Taiwan’s typhoons and earthquakes. It will take some time to work out these details. However, based on successful experience from Europe, confidence is growing among financial institutions to get involved in offshore wind.

Taiwan has excellent wind resources and supportive government policies. This, combined with the recognition that Taiwan has no choice but to make an energy transition from fossil fuels, make a compelling case for offshore wind.

On the development case, one of the major challenges is getting enough vessels. There are very few vessels at the moment. The financing issue can also be resolved. It is just a case of unlocking the ample liquidity available, especially from state-owned banks and life insurers.

Essentially, experience from Formosa 1 shows that all risks are manageable. The hope is that Formosa 2 and other wind farms now under development will show success on a slightly larger scale and give more financial players the confidence to get involved.

There is currently not enough insurance capacity available against earthquakes and typhoons, which will only increase as the build-out proceeds.