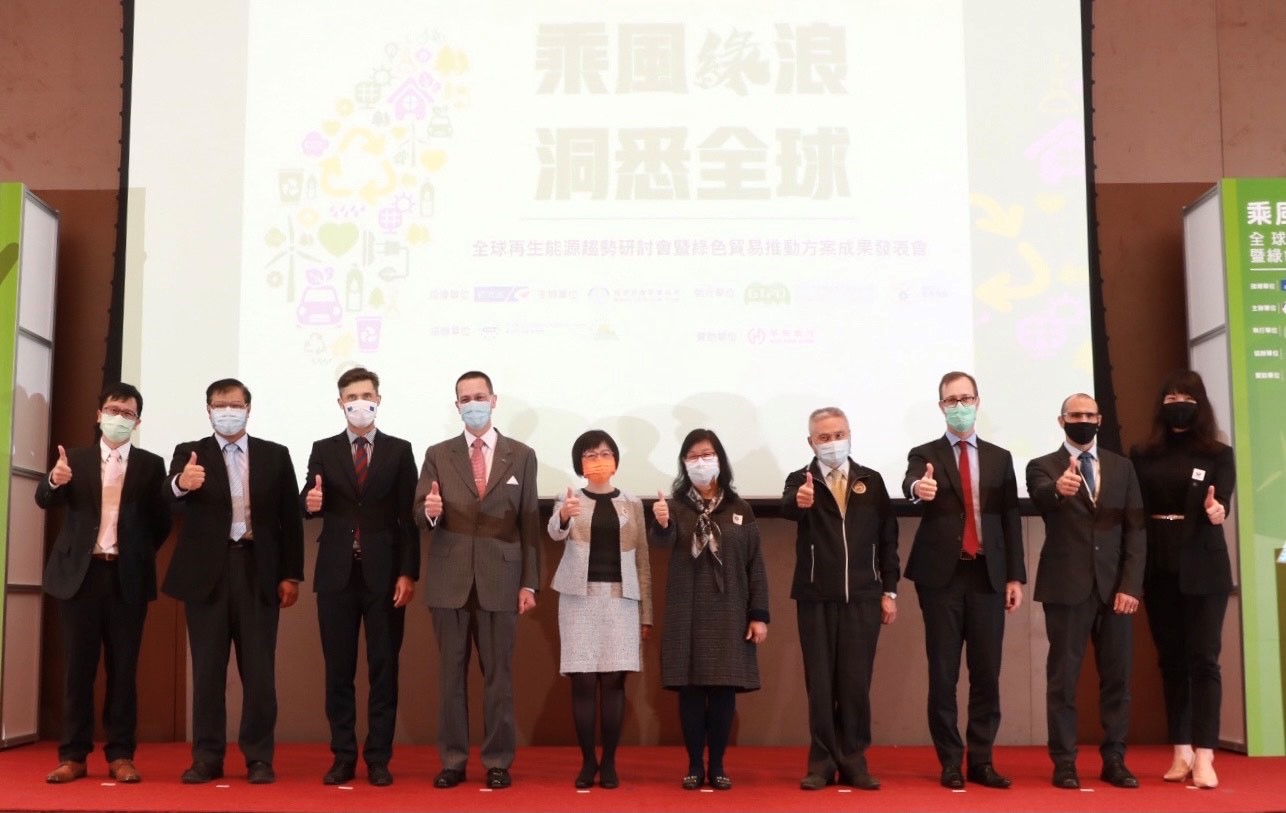 The ECCT's Low Carbon Initiative was a co-organiser of the half-day Global renewable energy trends forum together with the Taiwan External Trade Development Council (TAITRA) and the Bureau of Foreign Trade (BOFT), under the Ministry of Economic Affairs. At the event, opening remarks were made by the guests of honour after which presentations were given by industry executives on the subjects of wind energy, hydrogen, and energy storage. Opening remarks were made by Leonor FM Lin, President & CEO of TAITRA, Chang Shu-yi, Director of the BOFT's Trade Development Division and ECCT CEO Freddie Höglund.

Olivier Blachier gave a presentation on how to scale up from industrial to smarter hydrogen. What makes hydrogen attractive as a source of energy is its abundance (the most common element in the universe) but the relative complexity and expense of producing hydrogen as well as safety concerns have limited its usage to date. However, advances in technology that have made hydrogen safer and more affordable have made it more viable. But more importantly, the fact that hydrogen power produces no greenhouse gas emissions has given it renewed prominence as part of the solution to address climate change. The caveat of course is that the production of hydrogen has to be done using renewable energy.

The two most common methods for producing hydrogen are steam-methane reforming and electrolysis (water splitting). While the production of hydrogen has traditionally been done using energy from fossil fuels, electrolysis can be done using renewable energy. According to the speaker, while electrolysis is still relatively expensive, costs are falling and will continue to do so with economies of scale. Moreover, if hydrogen is produced using excess electricity, for example, during off-peak hours or from renewable energy produced and not needed during peak hours (such as solar energy during the day), the hydrogen produced would serve as a buffer source of energy for various applications, especially transport.

While there has only be limited uptake of hydrogen passenger cars globally and the current trend is more towards battery electric scooters and passenger cars for urban use, hydrogen fuel cells would be more practical for vehicles requiring long ranges and large vehicles such as trucks and buses. This is because large BEVs require enormous and heavy batteries. Moreover, buses and trucks with fixed routes would not require as many refuelling stations as passenger vehicles, making the infrastructure rollout less extensive and expensive. Therefore, hydrogen could serve not so much as competition for BEVs but complimentary to them.

Beyond large vehicles, hydrogen also has potential for powering trains, ships and even planes. Airbus, for example, already has three hydrogen prototypes, the first of which it is planning to have in the sky by 2031. Of course, for hydrogen planes to be deployed at scale would require not just the planes but also the hydrogen production and refuelling infrastructure to be in place.

There is growing industry interest in hydrogen. According to Blachier, over 90 multinational companies have joined an alliance to promote it. Given the environmental benefits, the EU and European countries France and Germany have committed funds to develop green hydrogen. Countries like Australia and Saudi Arabia are already thinking about producing hydrogen using solar energy and existing natural gas infrastructure to produce and transport liquid hydrogen. Japan, meanwhile, already has invested in developing hydrogen vehicles and infrastructure. According to Blachier, regulations are not yet in place in Taiwan to allow the development of a hydrogen ecosystem, meaning that government and industry would have to work together to create the right regulatory and industry conditions.

In his presentation Filip Grzegorzewski gave an overview of renewable energy development under the EU's Green Deal and Green Recovery Plan. European Council leaders recently raised the EU's target for greenhouse gas emissions to a net domestic reduction of at least 55% in emissions by 2030 compared to 1990 levels, up from its previous target of 40%, while the EU plans to be carbon neutral by 2050. This will mean targets will be adjusted accordingly from current levels of a 32% share of energy to come from renewables and a 32.5% improvement in energy efficiency by 2030.

The green recovery plan serves as a blueprint for post pandemic development that takes into account all factors aimed at building a better future for people and the environment.

The new target is being backed by committing €700 billion of the EU's forthcoming budgets to climate action.

In addition to renewables, large resources will be devoted to improving energy efficiency, especially in buildings across the EU. According to Grzegorzewski, by 2030 35 million buildings will be renovated, which will not only save energy and create jobs but also improve the quality of life for residents of the renovated buildings.

The subject of Paolo Ingarao's presentation was "Inside the offshore wind supply chain for new markets". He noted that his company had decades of experience in the wind energy industry, including the complex process of managing supply chains, covering multiple suppliers across the globe. It has manufacturing facilities in several countries in Europe and is building a new facility in Taiwan.

Ingarao made the point that many factors need to be considered when deciding whether or not to build facilities in any given country, including regulatory certainty, financing, a long-term pipeline and reliable suppliers of components and services. While government and industry players in Taiwan have expressed their ambitions for Taiwan to become a regional hub for offshore wind energy, the local supply chain is still in the very early stages of development. Based on his experience, Ingarao said that it takes between six and 36 months for his company to rigorously evaluate and begin contracting suppliers. He went into detail about the various steps that each supplier has to go through before his company is confident enough to proceed to work with them. Besides quality and capacity considerations, suppliers also have to demonstrate financial stability and price competitiveness, among others.

Should everything go smoothly, his company plans to create economic value of up to NT$3 billion through their wind turbine blade manufacturing plant in Taichung. The facility is anticipated to create up to 2,000 full time jobs in direct, indirect and induced employment.

Ingarao concluded that Taiwan has great potential to develop into a wind energy hub but that it will not be easy to become globally competitive and that government support will be crucial to ensure success.

In her presentation Joan Tsao gave an overview of the Green Trade Promotion Office (GTPO).