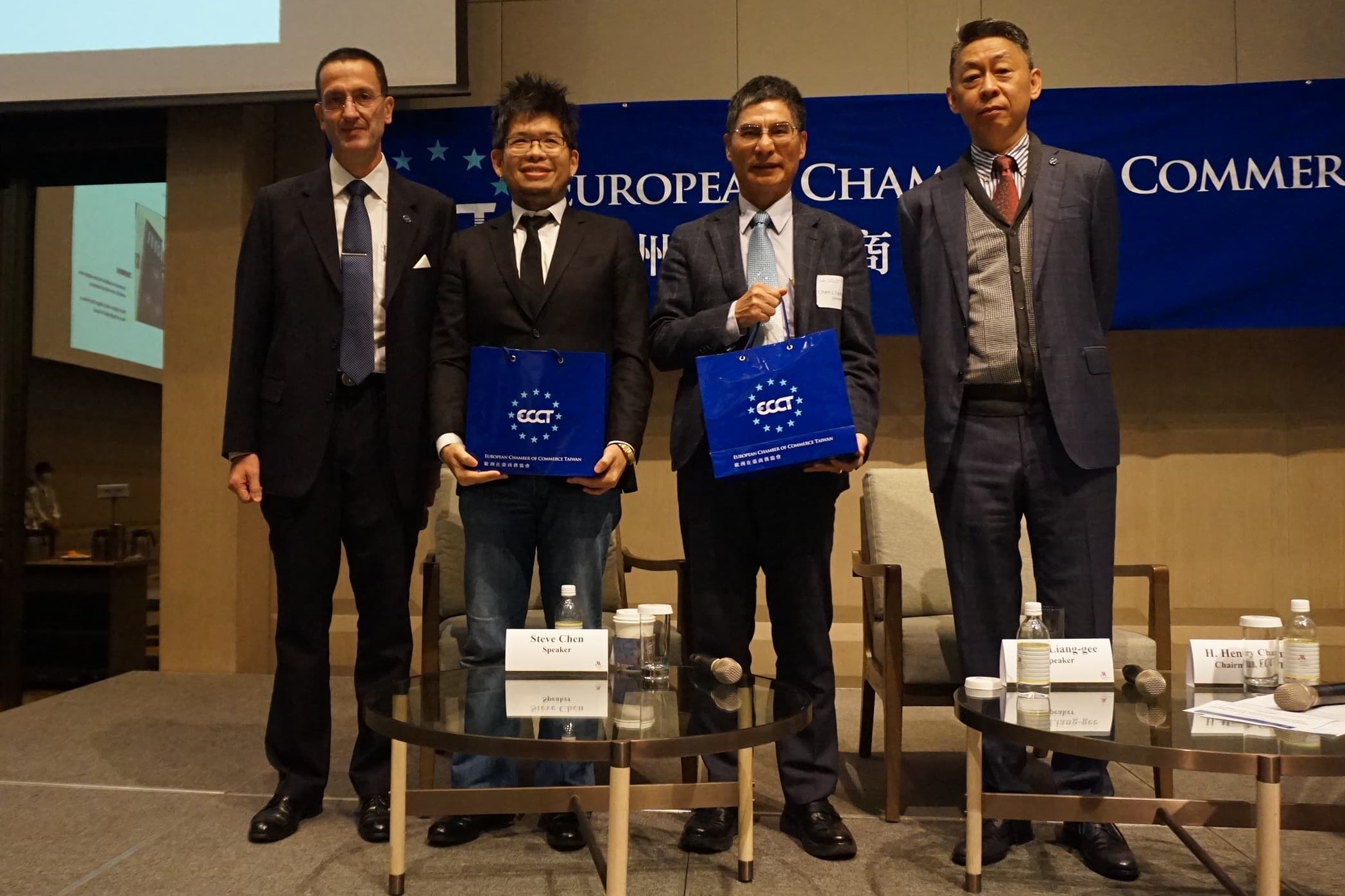 The ECCT hosted the first of its Next Generation Business and Leaders Series Premium Events on the subject of Taiwan’s place and prospects in the digital era. In the form of a free-flowing fireside chat moderated by ECCT Chairman Henry Chang, the event featured guest speakers Steve Chen, the Co-Founder of YouTube and, more recently, Draco Capital Partners, and Dr Chen Liang-gee, Former Minister of the Ministry of Science & Technology and currently a Distinguished Professor in the Department of Electrical Engineering at National Taiwan University.

Steve Chen was born in Taiwan but moved to the United States at a young age. He was one of very few Asian kids in his town and could not speak English when he arrived. He was therefore forced to adapt quickly and immerse himself in American culture. He studied computer science at the University of Illinois at Urbana-Champaign, one of the country’s top computer science universities, and went on to be part of the first wave of internet start-ups. According to Chen, he actually left university a few months before graduation after being recruited by PayPal, where he stayed for more than three years.

This was the time of the dotcom boom, where multiple companies with few or no prospects for monetisation of their business models nevertheless attracted huge venture capital funding. This all changed when the dotcom bubble burst, after which it became much harder to get fundraising.

Dr Chen Liang-gee said that in 2005 he was at ITRI and heavily involved in video processing technology, for which it won many awards and contests. He noted that ITRI’s technology was better than YouTube’s early versions. At the time he said that ITRI licenced the technology to companies working on hardware design but missed the business opportunities made possible by applications using the technology, such as YouTube. Steve Chen acknowledged that most of the original engineers at YouTube were from PayPal and more familiar with payment services than video technology. However, they were good at utilising available technology, recognising and solving problems and developing applications and business models.

Dr Chen went to say that there is great potential for developing AI in Taiwan but that the ecosystem is not ready. Dr Chen is doing his part to address this at Taiwan University where he has set up an incubator where new technologies and ideas can be tried out. This is also the thinking behind the Taiwan Tech Arena (TTA), an idea promoted by Chen, which aims to attract investors, help start-ups get funding and accelerate their market expansion internationally. Dr Chen said that hiring foreign talent for these start-ups is important to bring an international perspective. He noted that Taiwan’s education system produces excellent engineers but that they lack an international perspective. Giving people like Steve Chen a Gold Card to live and work in Taiwan (his card was awarded recently) is one way to attract foreign talent to Taiwan.

On the subject of regulation, Steve Chen said that a big battle is playing out between the business models adopted by companies like Apple versus companies like Facebook. He noted that YouTube tracks everything about users’ behaviour for analysis. Facebook and Google know more about you than your family members, he said. Apple, on the other hand is in much better position now in this regard, because, although its phones are expensive, it has pledged to not use and sell user’s data. It is a real question if the current business model adopted by companies like Facebook will ultimately be sustainable. He noted that Europe has always been much stricter than the US in this regard and calls are growing for even greater regulation and even the break-up of big tech. Europe is much more demanding in asking how companies are using data whereas the US has, to date, been much more relaxed in allowing companies to monetise content. In order to generate adverts, you need to gather a lot of data from and about users. Until now users have been willing to trade their data for free services. However, the experience of the US election whereby fake news spread much faster than news from verified sources is changing perceptions. Another problem for advertisers using sites like Facebook to place their ads alongside user-generated content is that it is impossible for them to ensure that their adverts do not sometimes appear alongside (and therefore apparently endorsing) content that they do not approve of. The problem is likely to get worse.

Dr Chen said that he created a project to try to identify fake news but eventually had to give up because it was realised that the problem is an ethical issue that cannot be solved by technology alone.

Dr Chen said that Taiwan has an opportunity in AI given its expertise in developing hardware and combining various technologies in products and services. There is also an opportunity to provide services to help companies digitalise. However, there is a need to fill the gap between the hardware and AI eras and develop viable applications and business models. This is the role of start-ups helped by entrepreneurs like Steve Chen.

On a question as to the top challenges facing Taiwan, Dr Chen said that Taiwan lacks international exposure, which is why, when he was minister, he opened offices in countries like Israel. Another challenge is that Taiwan’s salaries are not high enough to attract top talent. Taiwan could also improve the living environment to make it more appealing to foreigners.

Steve Chen said that starting a company in Taiwan is not so easy, even compared to the US and much more difficult than in countries like Singapore or Israel.

On a question as to Taiwan’s potential vs Europe, the US and China, Steve Chen said that much will depend on where capital flows to. Silicon Valley has managed to become attractive to investors and talent from all over the world. Innovation will happen where there is investment. However, there is an opportunity for Taiwan to take advantage of the fact that it has handled the pandemic well to attract both capital and foreign talent.