-
The ECCT’s Low Carbon Initiative arranged the third in its series of joint workshops with Taipower Research Institute (TPRI) on the topic: “Offshore wind, smart grids, infrastructure, and turbine technology”. The virtual webinar featured opening remarks by TPRI General Manager Dr. Chung Nien-mien and Toshiaki Kimura from the LCI Steering Committee and presentations from representatives from companies involved in offshore wind energy. This online webinar was attended audience of 103 personnel, 63 from the TPC, and 40 from the LCI.
-- 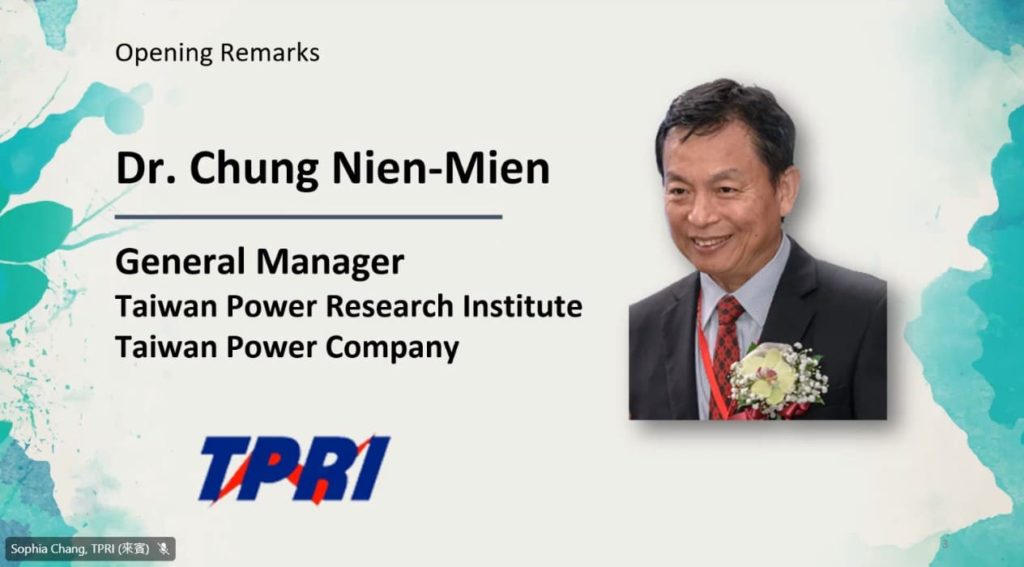 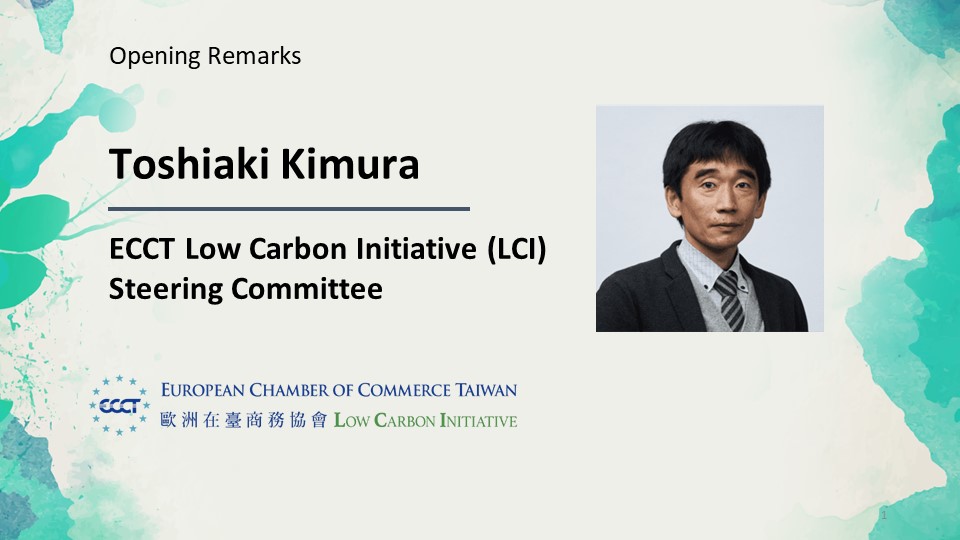 -
In his presentation, Wilko de Jong, General Manager of Heerama Marine Contractors gave a presentation on sustainability and technology advancements in offshore wind. He noted that his company is involved in project construction and engineering and operates its own vessels worldwide.

-
The company’s business includes turbine foundations, turbines, AC and DC substations and decommissioning. The biggest focus is on foundations. His company’s large vessels are suitable for the large turbines of modern wind farms. The company has already worked on the TPC’s Changhua offshore wind farm project. Its largest vessels can install 15MW turbines, the size of the next generation of turbines. It has installed more than 4,200 piles since 1992. The speaker went on to describe the technical pile installation process, as well as the equipment used.
- 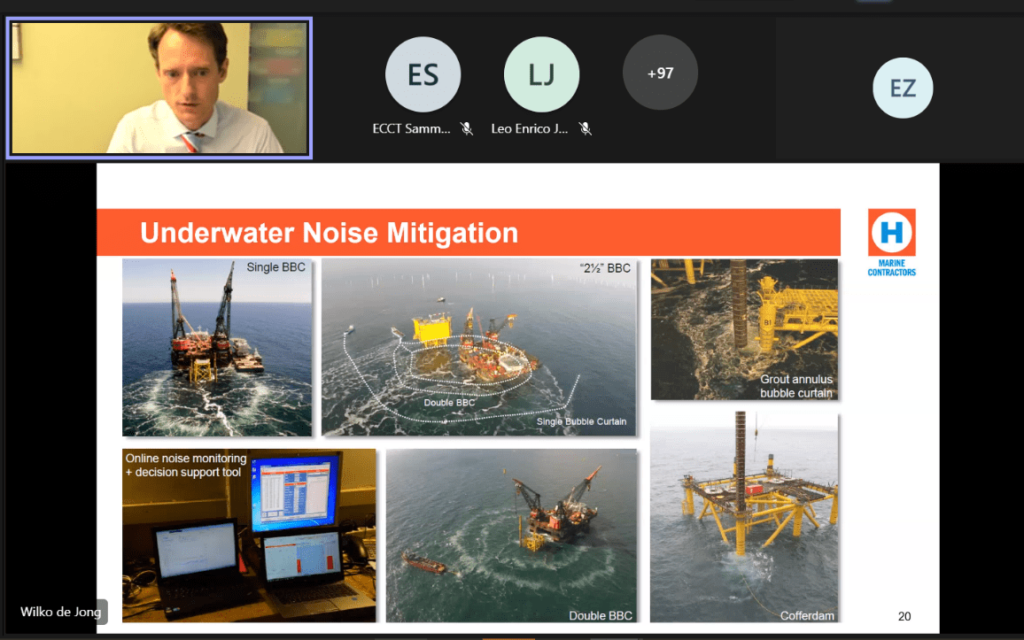 -
The company has a sophisticated simulation centre to provide training for all people involved in building offshore wind farms, that trains them to deal with all types of challenges that may arise. He noted that his company is using vessels run on LNG, which reduces the level of emissions compared to traditional diesel vessels, and is working on reducing the noise level during construction. The company is also preparing for floating turbines by working on floating foundation designs.

On a question about earthquake impact on installations, de Jong said that foundations are designed to withstand earthquakes.
- 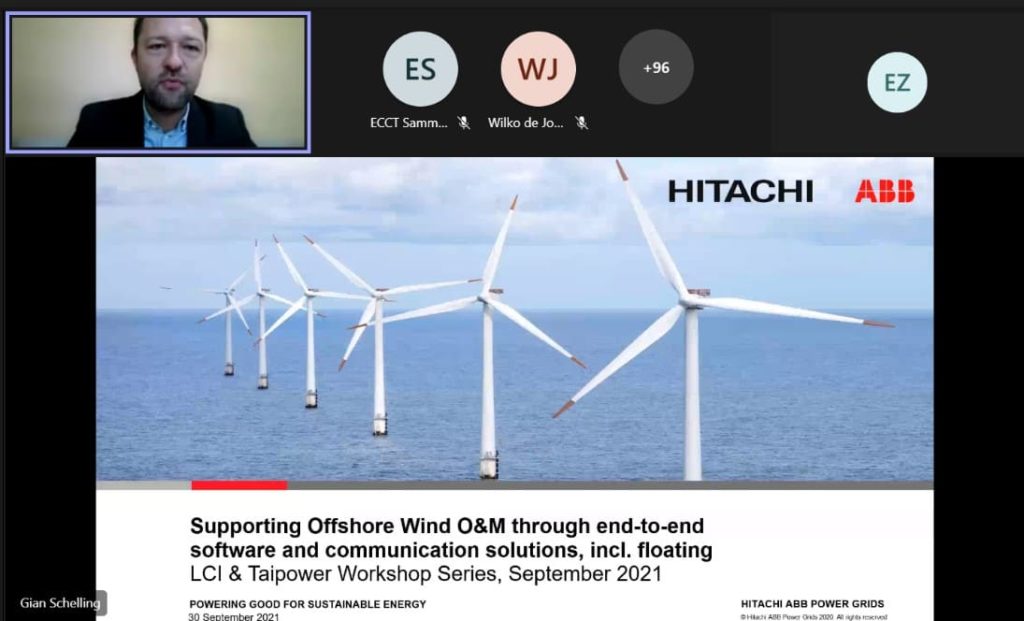 -
In his presentation, Gian Schelling, Business Development Manager, Renewables at Hitachi ABB Energy spoke about what the company is offering in terms of software and communications solutions, including prognostics for offshore wind turbines.

The company provides power grid equipment and software solutions. In terms of automation, the company helps with project planning and execution, even automation of trading energy if power is sold to corporate off-takers.
- 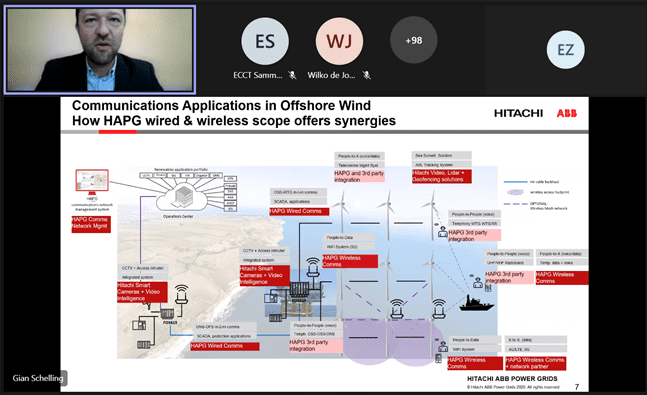 -
In terms of communications experiences, you need solutions to connect systems both onshore and offshore to make sure that turbines and transmission assets are working properly. Software solutions are often overlooked during the O&M phase of wind farms, especially the risks, such as typhoons. All data from critical components need to be transmitted to operations centres. It is crucial therefore that systems are robust. It is not just wind turbines but also substations that have to work perfectly. It is, therefore, better to have a solution that integrates turbines and transmission assets. The speaker went on to explain the details of the company’s completely integrated system that can monitor, control, and operate all assets in real time, right down to key components in each turbine.

The company customizes its software solution for each customer to configure prognostics.

The company has solutions for floating solar farms employed in Switzerland and wind farms in the US, which can be applied to the offshore wind for remote wind monitoring and controls.
-

-
In his presentation, Andreas Munk-Janson, Head of Operations for Ørsted Asia Pacific, spoke about his company’s operations and maintenance (O&M) setup in Taiwan.

The company is now installing turbines offshore and preparing for operations to start in 2022. Building a safety culture is the key focus of the O&M ramp-up. Operations people have been in place in Taiwan since 2018 and will need to be ready for work next year. The company recruited people early and sent many of them for on-the-job training in sites in the UK for much of 2021 where they became fully integrated and participated in all aspects of operations both onshore and offshore. There was also classroom and technical training for all technical procedures. Employees have gone through all the critical steps multiple times to ensure that they are equipped with the necessary skills and experience. They also took part in social activities to acquaint them with the company’s culture.
- 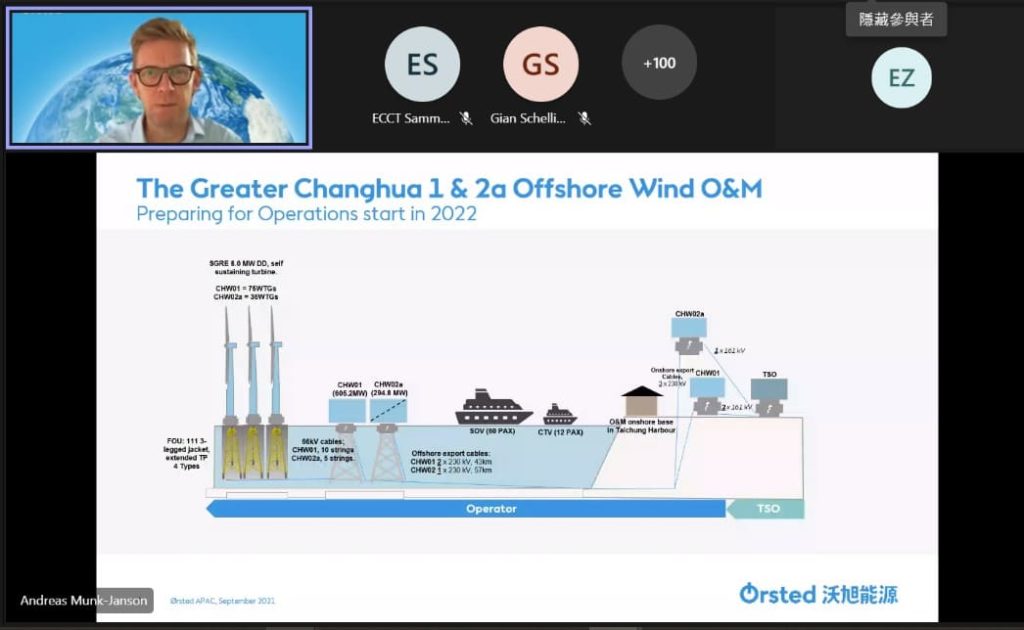 -
People from the transmission team have also been sent to Singapore for training. The company’s O&M facility in Taichung harbor is already ready and offshore service vessels are expected to be delivered in 2022. Maintenance technicians will work on a two-week rotating basis.

In order to find and develop talent, the company has been working with universities and other educational institutions across Taiwan. For example, it partnered with Da-Yeh University to develop a programme. There are now many other institutions offering training for all aspects of wind farm development.
- 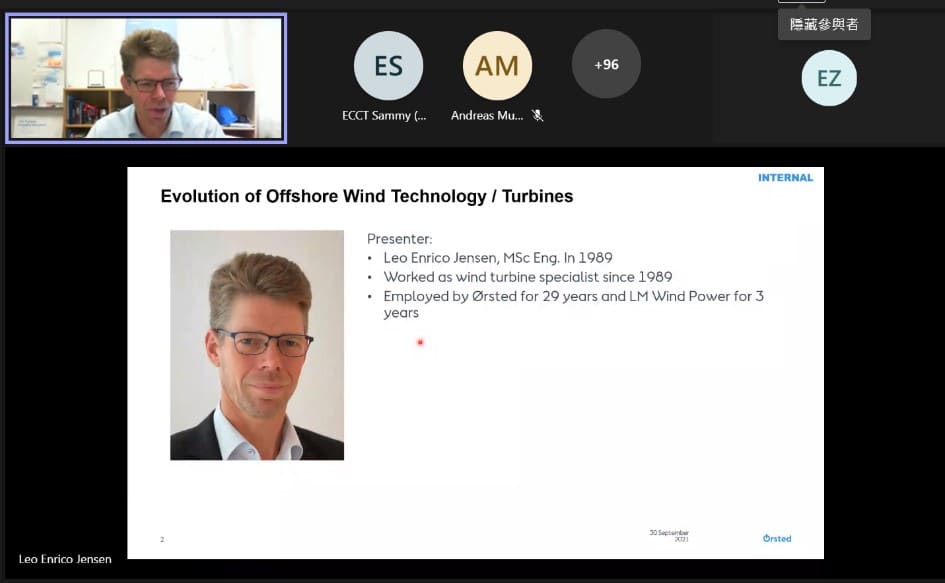 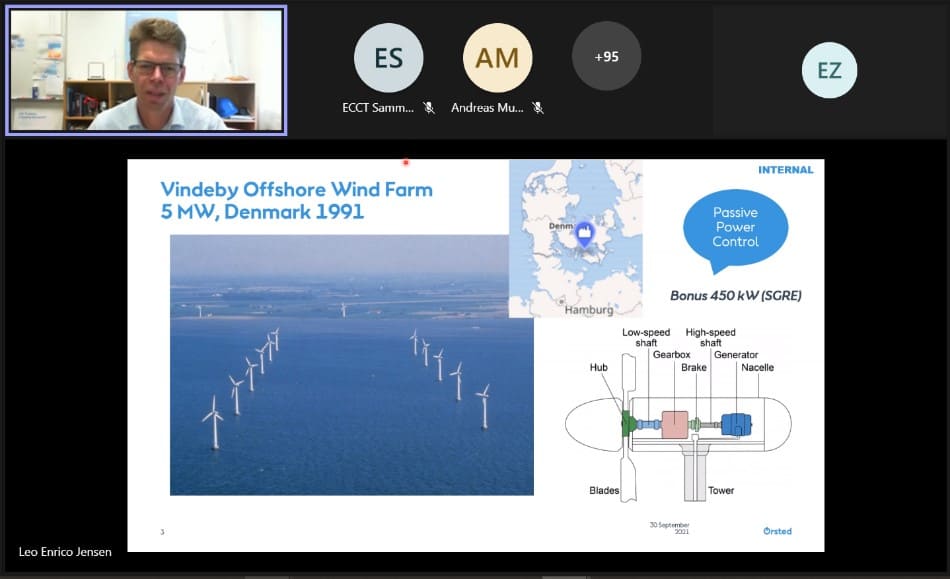 Not many control functions were available in older turbines, but this has improved with each generation. A step-change occurred around 2006 when converters were installed in turbines. Today’s turbines allow for variable speed control and full-scale converters and transformers installed in the turbines. Great advances have also been made in monitoring and control systems to help in the regulation of the grid.

There is a lot of speculation as to how big turbines will get in the future. Since 2002, they have doubled in size every eight years. If the trend continues, they could reach 30MW, but the trend could be interrupted for any number of reasons. -
Alex Robertson, Country Manager of Vestas Taiwan, noted the importance of work on the data side of offshore wind. In 2018 Vestas purchased Utopus Insights, a leader in data and forecasting. Robertson then handed over to Carmen Parra Moyano, Product Director of Scipher.Fx at Utopus Insights who gave a presentation on the application of wind power forecasting. Scipher is the name of the company’s data platform. 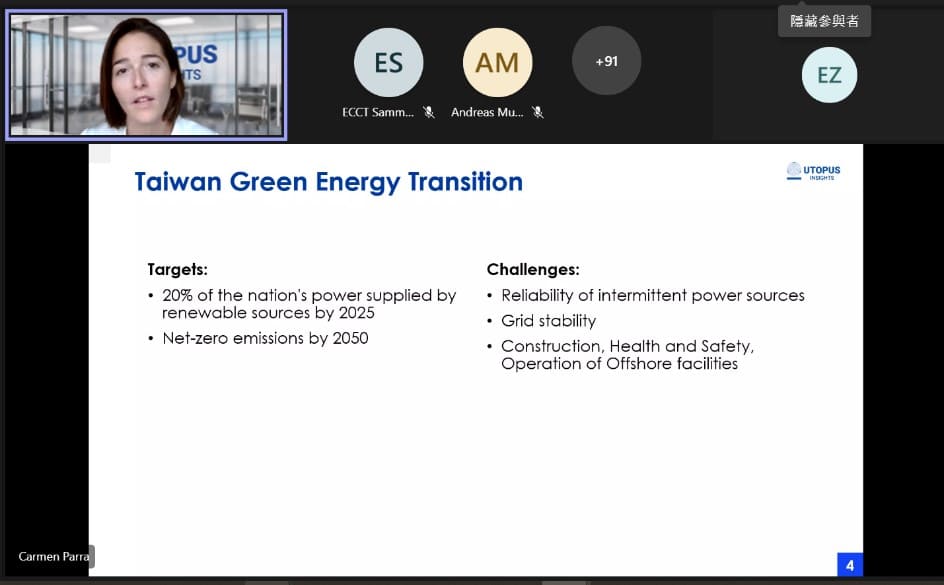 -
Challenges in the green energy transition include intermittency of wind, grid stability and construction and O&M health and safety, which is more costly and dangerous given Taiwan’s rough sea conditions.
-

-
All managers are using monitoring tools, but more advanced systems employ predictive analytics to help reduce O&M risks. Scipher’s system can make predictions for the next five minutes and up to two weeks in advance, which are adjusted up to 16 times a day based on changing conditions. The advantage of having better predictions of wind conditions is that it makes it easier to plan and optimize O&M operations and reduce the waste of wind resources from downtime.