EU’s response to the crisis in Ukraine 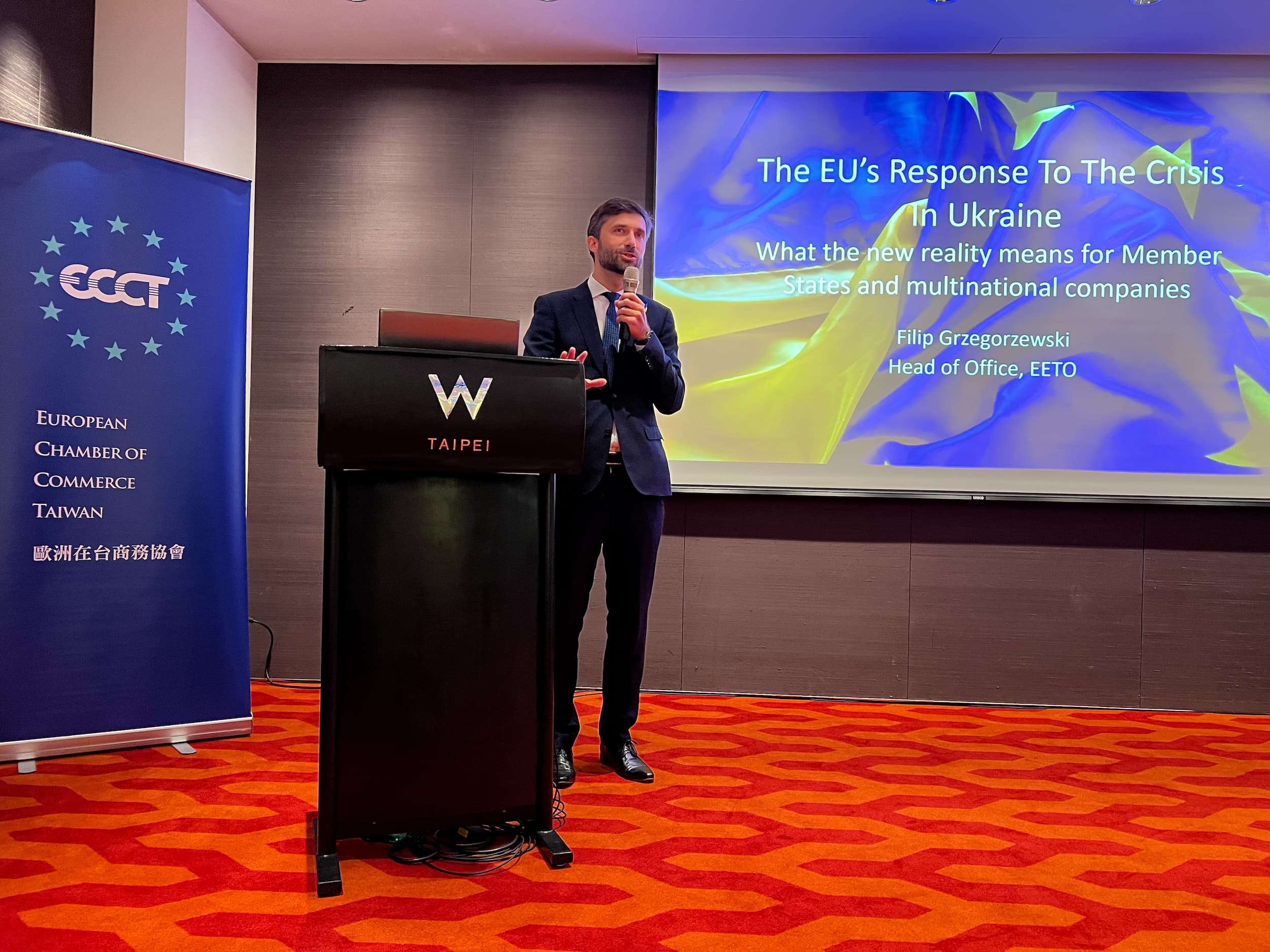 The ECCT arranged a special lunch featuring guest speaker Filip Grzegorzewski, Head of Office, of the European Economic and Trade Office to talk about the EU's response to the crisis in Ukraine and what the new reality means for EU member states and multinational companies.

The speaker began with a history of Ukraine, dating back to the 8th Century where it was settled by the Rus people, who, scholars generally agree, were originally Norse people, mainly originating from present-day Sweden, settling and ruling along the river-routes between the Baltic and the Black Seas from around the 8th to 11th centuries. In what  Grzegorzewski described as the "curse of geopolitics", given its location at the margins of various empires, the territory that is now modern Ukraine has, at various points in its history been occupied by foreign powers, including the Mongol Empire (there were several invasions of different parts of the territory in 1223, 1237 and 1240), the Polish-Lithuanian Commonwealth, the Russian Empire (which acquired different parts of the country between 1650 and 1812), the Ottoman Empire and the Austro-Hungarian Empire. Ukrainian nationalism can be traced back to the 19th Century, but it found concrete formation in the aftermath of the Russian Revolution, when the Ukrainian People's Republic was formed in 1917. The short-lived state was forcibly reconstituted into the Ukrainian Soviet Socialist Republic, which became a founding member of the Soviet Union (USSR) in 1922. It finally regained its independence in 1991, following the dissolution of the USSR.

Another important milestone in Ukraine's history was the Budapest Memorandum on Security Assurances, signed by the presidents of the United States, Russia and the United Kingdom in 1994, under which Ukraine, Belarus and Kazakhstan agreed to surrender nuclear weapons that were left in their territories after the dissolution of the USSR, in exchange for security guarantees, which prohibited the Russian Federation, the United Kingdom and the United States from threatening or using military force or economic coercion against these countries. Yet, despite this historical agreement, Russia, under the leadership of Vladimir Putin, invaded Crimea in 2014 and subsequently annexed it, and in 2015 Russian backed separatists took control of parts of the Donetsk and Luhansk regions and then launched a full scale-invasion of Ukraine in 2022.

Why did Putin do this? According to the so-called "offensive realism theory", Putin's actions should be easy to comprehend if you understand his security concerns. According to an advocate of the theory, John Mearsheimer, who blames the west for the Ukraine crisis, "Ukraine serves as a buffer state of enormous strategic importance to Russia. No Russian leader would tolerate a military alliance that was Moscow's mortal enemy until recently moving into Ukraine. Nor would any Russian leader stand idly by while the West helped install a government there that was determined to integrate Ukraine into the West." However, while the theory is useful as a way to explain why countries protect themselves, it is also flawed and overly simplistic. For another, it ignores the aspirations and the right to self-determination of Ukrainians themselves, treating Ukraine’s status and future as a matter to be decided by larger states.

The EU vs Disinfo website (a flagship project of the EU's East StratCom Task Force) lists and contradicts a number of lies that Putin's Russia has promoted as justification for its invasion. To the lie that Russia seeks the demilitarisation and "de-Nazification" of Ukraine, the site counters that over eight million Ukrainians died fighting against the Nazis in WW2 and communist and Nazi propaganda is banned in Ukraine while Ukraine is governed by a democratically elected government. To the lie that Russia is defending the Dombas region from Ukrainian aggression, the site counters that Russia is the aggressor attacking a democratic and peaceful country and that Ukraine has a right to defend itself.

Russia's invasion of Ukraine has received a decisive and unified response from the west, which has condemned it as a premeditated and unprovoked attack on an independent and sovereign nation. 141 countries in the UN supported a resolution condemning Russia while only five countries opposed it (there were a number of abstentions including from China and India). The EU has imposed the largest sanctions package in EU history on Russia and Belarus, including 862 individuals and 53 entities in the financial, energy, aerospace, maritime, transport and technology sectors. In addition, visa measures have been introduced and action has been taken against disinformation actors, like Russian state-run media. While the intention was to target Putin and his supporters, it is inevitable that the sanctions will hurt ordinary Russians as well. While this will inevitably harm innocent people, Russians cannot all claim innocence given that a large segment of the Russian public still supports Putin.

As for the impact on multinational corporations (MNCs), there is a growing list of companies that have either suspended operations in the country or pulled out altogether. For those remaining, they can expect it to get more and more difficult to do business in Russia. The new geopolitical reality will also have broader implications for global supply chains (already struggling to adjust to the impact of the coronavirus pandemic). The Russian economy is already reeling and should expect to fall into a deep recession. There will be spill-over effects for Russia's main trading partners as well as the global economy, mainly in the form of higher energy and commodity prices (and inflation), especially in oil, gas, metals and wheat (since Russia is a major producer of these commodities) but also to other sectors, such as countries that rely on Russian consumers and tourists. While Taiwan will be less affected because it has few investments and less than 0.3% of its exports go to Russia, it will not be immune to inflation from higher energy and other commodity prices while exporters will also feel an impact from the drop in global economic activity resulting from the crisis.

The invasion has also prompted a sea change in the EU's approach to defence. For the first time in its history, the EU agreed to purchase and send weapons to a third country and member states have signalled their intention to spend more on defence, demonstrating that Europe is willing to pay a price to protect freedom and security. Grzegorzewski made the point that this is also about protecting the international rule-based order, that is also essential to business.

In terms of the human impact, at least six million Ukrainians have been displaced by the war so far and up to four million (and counting) have fled Ukraine for neighbouring countries. So far, people in European countries have demonstrated extraordinary solidarity and willingness to help by offering to house refugees or provide other types of assistance.

He concluded that Ukrainians were not just fighting to protect their own country but also fighting to protect universal values. While Putin's objective was to divide the world, the immediate response was unity, at least in the west. It remains to be seen if this resolve will endure but how the world responds will determine the future of the global order.

In the Q&A session, when asked about the response from China and India, Grzegorzewski said that he hoped that both countries realise that a stable rules-based international order is in their best interests and that they will use their influence to persuade Putin to pursue a peaceful and acceptable resolution to the conflict.