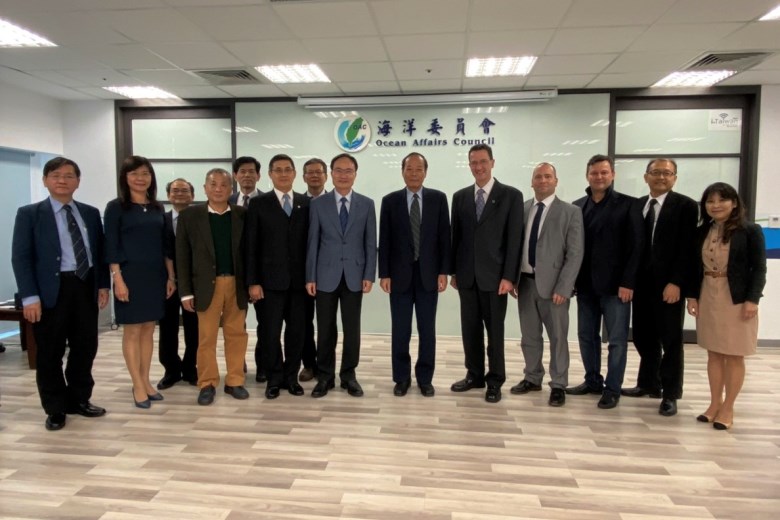 An ECCT delegation led by ECCT CEO Freddie Höglund paid a visit to Minister Lee Chung-wei and officials of the recently-established Ocean Affairs Council (OAC) in Kaohsiung. At the meeting the delegations exchanged information on their respective organisations and discussed marine environmental and business issues.

The OAC was officially set up in 2018 and its headquarters were opened a year later in Kaohisung. Its stated mission is to defend national maritime rights and interests, provide a safe marine environment for the people and deepen the conservation of marine resources. Its goals include developing a prosperous marine industry, fostering a culture of marine basic culture, and developing "forward-looking marine technology to connect with international ocean affairs".

The visit was arranged after 10 years of annual beach cleaning events arranged by the ECCT. Rather than just picking up rubbish, the purpose of the visit was to see what can be done about reducing the amount of rubbish discarded. At the most recent beach cleaning activity, held in October 2019, more than 520 ECCT members from 16 companies collected nearly 1,000 kgs of rubbish. Most of the rubbish collected was from the fishing industry.

At the meeting, Minister Lee introduced some of the OAC's projects to clean up Taiwan's beaches and coastlines. Among other initiatives, the OAC is offering incentive measures to the fishing industry. This includes offering lower prices for new nets with registered barcodes (for tracking) if they hand in old nets (rather than discard them in the ocean) as well as paying trawler owners to collect waste while sailing near the coast. The OAC is also using satellites to identify the location of waste and actively removing discarded fishing nets from the ocean floor. Its goal is to clean up all the fishing net waste on Taiwan's surrounding sea bed within three years. In addition, the OAC is using satellites to identify ships that are discarding oil into the ocean and conducting marine education.

At the meeting the ECCT touted the benefits of offshore wind energy and the potential to develop wave power energy along Taiwan's coast. They also discussed the subject of rural sustainable development and tourism and potential areas of future cooperation.