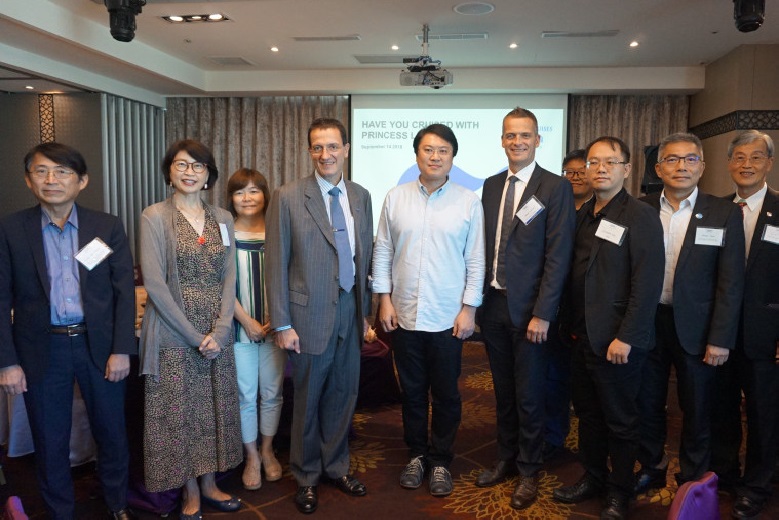 A delegation of ECCT members and guests led by ECCT Chairman Håkan Cervell and CEO Freddie Höglund visited Keelung where they enjoyed a working lunch meeting with Keelung Mayor Lin Yu-chang and senior government officials. After lunch, guests were taken on a luxury cruise along the coast and around Keelung Islet. At the lunch presentations were given by Mayor Lin and Peter Chan, Marketing Director, Carnival Corporation. The visit was part of the ECCT’s ongoing activities as a nationwide organisation to foster greater cooperation with municipal governments all across Taiwan.

In his presentation Mayor Lin gave an overview of plans to upgrade infrastructure in Keelung. He noted that the upgrade to Keelung train station and a new shopping complex in the harbour area have already been completed and are open to business. Future plans include a multi-functional cruise transit business centre connecting the train station, harbour and a proposed light rail system and a second cruise passenger transit centre.

The mayor showed design models of the new facilities. The new cruise terminal will have an environmentally-friendly design that includes a green roof for leisure activities. A large area around the new facilities will be pedestrianised to make it more comfortable for tourists and local residents. Autonomous electric buses will be used for travelling around the harbour area. In addition, roads connecting the harbour area to highways will be upgraded to improve traffic flow.

The mayor stressed that budgets for these projects have already been approved and construction is expected to commence soon and be completed within three to four years.

The mayor went on to highlight some of the other projects the government will be working on, including upgrading tourist attractions and installing public artworks along the coast. The government is working to increase cultural and community activities such as the Ocean Eagle Carnival. The mayor concluded his speech by thanking the ECCT for its support. He said he had used the recommendations made in the ECCT’s 2014 Position Paper to upgrade Keelung’s harbour facilities in his presentations to central government agencies, which had succeeded in getting the budget needed for building the necessary infrastructure.

In his presentation, Peter Chan gave an introduction to Princess Cruises, which is part of the Carnival Group. Princess Cruises has 17 ships which take guests on cruises lasting from just three days to over 100 days. The cruises have different focuses, such as gourmet cuisine, featuring celebrity or Michelin-starred chefs or shows, or adventure cruises to see glaciers or wildlife.

The speaker highlighted the larger economic benefits of the cruise business to ports of call like Keelung. Cruise ships have enormous procurement needs in terms of fresh food, beverages, luxury goods for boutique shopping, replacement equipment, maintenance services, not to mention the business for local shops, restaurants and transport service companies when visitors come ashore. Taken together, this creates enormous multiplier effects for the local economy.

After lunch, guests were taken on a short bus ride to Bisha Village, where they boarded a luxury yacht for a cruise out into the open ocean. While enjoying barbeque and drinks on board in perfect weather, they first visited a protected area where authorities have outlawed fishing and other activities. According to Keelung officials, this has resulted in a large increase in marine life in the area. Afterwards, the yacht headed for Keelung Islet, a small island off the coast of Keelung, which is home to several bird species. After circumnavigating the island, the yacht headed back to the harbour, arriving just in time to avoid a late afternoon shower.

New co-chairs for the Supply Chain and Banking committees