As has become tradition, the ECCT celebrated Christmas early when around 120 ECCT members, colleagues, friends and families gathered for a lively celebration.

Guests arriving early were able to stave off winter chills with a warm cup of mulled wine (known as “Glühwein” to Germans & Austrians and “Glögg” in Scandinavian countries) served with raisins and nuts and accompanied by ginger biscuits. This was just the first in a smorgasbord of traditional European festive dishes that guests were treated to.

The lunch began with a ceremony to thank outgoing ECCT Chairman Håkan Cervell.  In his remarks to thank the chairman ECCT CEO Freddie Höglund made the point that the while the chairman’s position is voluntary, the duties involved, which include attending numerous meetings, events, ceremonies and speeches, take up almost as much time as a full-time job. Moreover, Chairman Cervell continued to perform his duties even after becoming seriously injured in a traffic accident. In fact, he insisted on joining the ECCT’s annual Open Door Mission to Brussels, even though he had to go to meetings in a wheelchair and on crutches. For going over and above the call of duty, the CEO handed over a plaque to the chairman and some other gifts.

Later, to get members in the Christmas spirit, the Taipei European School’s junior choir and a full accompaniment of musicians playing guitars and other strings, horns and drums, took to the stage to perform some lively Christmas songs. The musicians and choir were introduced by TES CEO David Gatley.

Just as the choir and band were about to leave the stage, Saint Nicholas (also known in some parts as Santa Claus or Father Christmas) happened to show up. There was something odd about Saint Nic since he spoke with British accent, even though he said he was from Lapland. He also appeared to be in a jolly mood as he cracked some jokes about his new environmentally-friendly sleigh and being asked for a visa when he stopped by the UK.

St Nic then proceeded to hand out presents to those children who had promised that they had been good during the year.
After Saint Nic had departed by sleigh and reindeer, guests lingered a while longer to imbibe some more Christmas spirit of the liquid kind. 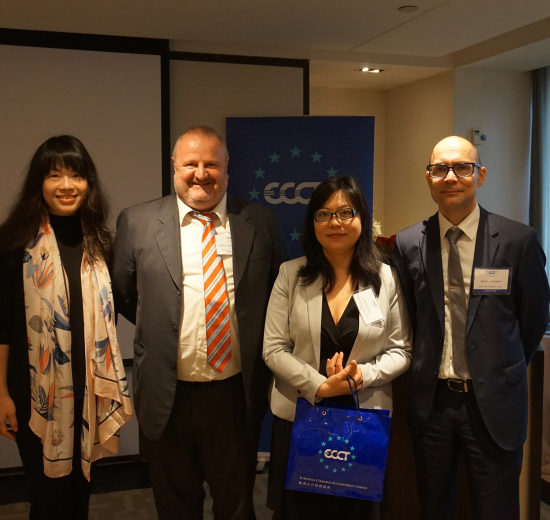