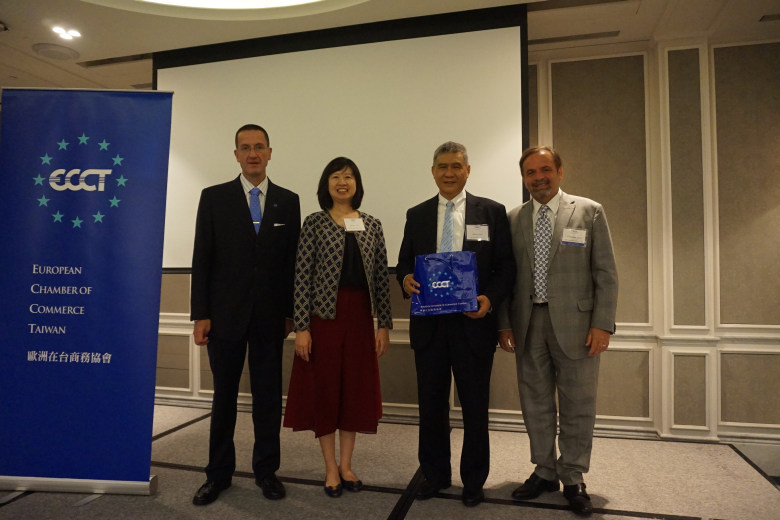 The ECCT's Technology committee hosted a lunch with guest speaker Yancey Hai, Chairman of Delta Electronics on the topic "Delta: From manufacturing components to providing smart green solutions".
The speaker made the point that every company has to remain innovative if it is to survive. He cited examples of the world’s two largest television makers in the 1970s and some of the largest computer companies in the 1980s which no longer exist today because they could not adapt. Delta was a supplier to these companies but was able to adapt to changing market dynamics and move with the times. One important element in this was the decision to focus on its own brand, software and solutions, since the OEM business is extremely competitive and companies that are merely component suppliers have little bargaining power.

Delta’s mission is “to provide innovative, clean and energy-efficient solutions for a better tomorrow”. The speaker provided a good example of this mission in action in the form of the company’s solution for solar power towers. Also known as central tower power plants or heliostat power plants, these solar power plants use an array of flat, movable mirrors (called heliostats) to focus the sun’s rays upon a collector tower. The concentrated heat is used to heat liquid sodium to drive turbines. To be effective, the mirrors have to be moved constantly (almost every minute, according to Hai) to be at the right angle to reflect the sun’s rays on the tower. While Delta does not manufacture mirrors, it provides the components and sophisticated software system to make sure the mirrors are always at the right angle.

Delta is a global leader in both power and thermal management solutions for a wide range of industry sectors through its three main divisions, focused on power electronics, automation and infrastructure. The company has 169 sales offices, 38 plant sites and 70 R&D centres globally. Many of its operations in Europe were acquired through major acquisitions in 2003 and 2015.
Delta offers some of the world’s most energy efficient power products, including server power supplies with over 96% efficiency, telecom power up to 98%, and photovoltaic inverters up to 99%.
Delta’s solutions can make a large contribution to energy savings and carbon emission reductions in applications such as data centres, which have huge energy needs.
The speaker made the point that it is much easier to improve energy efficiency and save power than having to build more power stations. Buildings account for about a third of all energy usage globally so it makes sense to make buildings more energy efficient. This is the main focus of Delta’s building automation solutions which control every aspect of a building’s energy use from lighting, heating, ventilation and air conditioning (HVAC) to surveillance.

According to the speaker, from 2006 to 2018, Delta has enabled 26 green buildings and one green data centre. According to the company’s estimates, in 2017 Delta’s certified green buildings saved 14.9 million kWh of electricity which is equivalent to a cut in CO2 emissions of 9,268 tonnes.
When Delta renovated and retrofitted its own headquarters in Neihu Taipei, it managed to reduce energy consumption by 40% from three million kilowatt hours (kWh) to 1.8 million kwh. For its customers, the company’s building automation solutions deliver 12% annual energy savings at a facility of Telecom Italia by enabling eco-friendly control of HVAC systems while its smart lighting control system reduced annual lighting energy savings at Manchester airport in the UK by 89%.

According to Hai, if the same solutions were to be adopted in all buildings in Taiwan, the energy savings would be equivalent the energy generated by two nuclear power plants.
Delta’s micro grid-supported solutions integrate electric vehicle (EV) charging and energy storage systems to tackle energy scarcity by optimising the usage between renewable energy sources, the power grid and EVs. Delta’s Vehicle-to-Home (V2H) / Vehicle-to-Grid (V2G) EV chargers allow EV drivers to use the energy in their EV batteries to power their home appliances or sell it back to the electricity grid.
All in all, according to the speaker, from 2010 to 2017, Delta’s high efficiency products and solutions enabled electricity consumption savings of 24.3 billion kWh and carbon emissions reductions of 12.96 million tonnes for its customers.

Since 2011, Delta has been selected as a member of the Dow Jones Sustainability World Index (DJSI World) for eight consecutive years. For seven consecutive years (from 2011-2017), Delta was named one of Taiwan’s Top 20 global brands. Delta was also ranked by the Carbon Disclosure Project (CDP) at the climate change leadership level in 2016 and 2017.