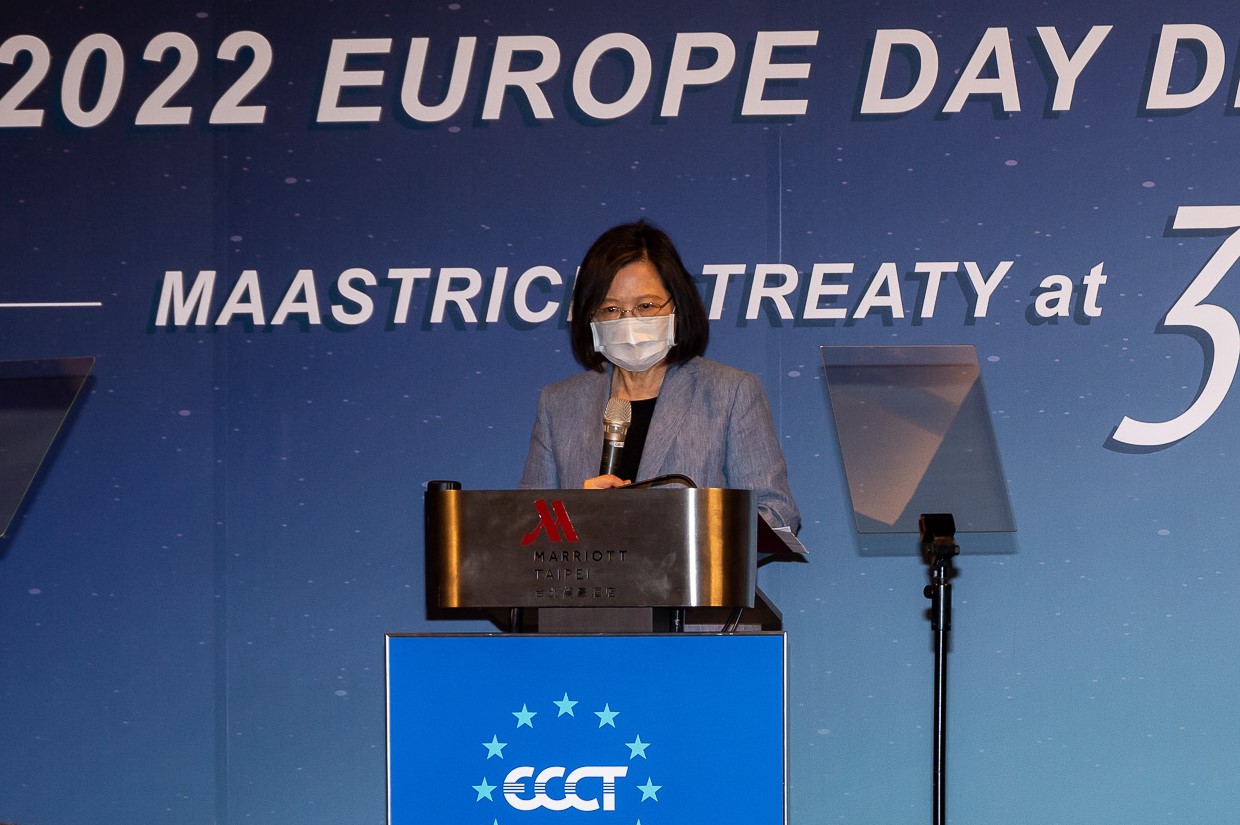 The ECCT's annual Europe Day Dinner was attended by a capacity crowd of distinguished guests including President Tsai Ying-wen, Filip Grzegorzewski, Head of the European Union's (EU) European Economic and Trade Office (EETO) in Taiwan, senior government officials and executives from European and Taiwanese companies. At the dinner, speeches were given by President Tsai, the EETO head and ECCT Chairman H Henry Chang.

In his speech at the dinner, Chairman Chang began by saying that ECCT has been advocating the lifting of Covid-19 restrictions and that members were attending the dinner in support of the government's policy of learning to live with the virus. He went on to urge the government to lift the remaining restrictions on inbound travellers so that Taiwan could be open for business and to the world.

This year's dinner celebrated the 30th anniversary of the Maastricht Treaty, which merged three existing entities: the European Coal and Steel Community (ECSC), which was formed in 1951 (under the Treaty of Paris), and two other entities, the Economic Community (EEC) and the European Atomic Energy Community (Euratom), which were formed in 1957 (under the Treaty of Rome). The Maastricht Treaty created a common EU citizenship which allowed citizens of EU member states the right to live, work and study anywhere in the EU and created the European Economic and Monetary Union (EMU), which led to the introduction of the euro.

The chairman noted that the 1990s also witnessed significant progress in Taiwan's transition to democracy. 1992 was the first direct election of the Legislative Yuan and 1996 saw the first democratic presidential election. Building on rapid economic developments in the 1990s, Taiwan joined the World Trade Organisation in 2002, which marked the start of a rapid and sustained increase in international trade and investment over the next 20 years. At the end of 2001, accumulated investments by Europeans in Taiwan were only around US$6 billion. These have since expanded more than ten-fold to over US$62 billion, making Europeans the largest group of foreign investors in Taiwan. And in line with this exponential growth, membership of the ECCT recently reached a record high of over 1,000 individuals from over 420 companies and organisations.

The chairman went on to highlight some of the achievements of Taiwan under the Tsai administration, which included pension reforms, becoming first in Asia in gender equality and marked improvements in the integrity of the investment environment. Thanks to the government's efforts to increase transparency, tackle corruption and thereby improve the integrity of the investment environment, Taiwan has seen steadily improving rankings, including reaching first in Asia in the Bribery Risk Matrix published by anti-bribery and compliance organization TRACE, and 6th (out of 86 countries) in Transparency International's 2020 Government Defence Integrity Index, which was the same ranking as Germany. Last year, Taiwan was ranked the top country in Asia and 11th globally in the Economist's Democracy Index and the 2nd freest country in Asia by Freedom House. In addition, Taiwan has joined advanced nations around the world to embrace the UN's Sustainable Development Goals and pledged to reach net zero greenhouse gas emissions by 2050. Moreover, despite the global coronavirus pandemic, Taiwan's economy has performed strongly, thanks to the acceleration of digitalisation, Taiwan's strength in technology and steady leadership. Last year, Taiwan's GDP rose by over 6% and GDP per capita surpassed US$30,000 for the first time. In terms of purchasing power parity, Taiwan is already higher than many OECD countries and the IMF forecasts that Taiwan will soon rise to among the world's 20 largest economies.

The chairman said that, as part of Taiwan's international business community, the ECCT is willing and ready to help Taiwan to continue to make further economic and social progress by focusing on the three domains or platforms of the ECCT which represent the best of European know-how in Taiwan.

In terms of energy transformation, he highlighted the ECCT's LCI platform, which he said has had done an admirable job by placing the focus on Taiwan's energy security and energy independence. “Whether it's wind, solar, geothermal energy as well as energy storage, smart grids and green hydrogen, these are the strong suits of European businesses. With the hardware or infrastructure in place, software must likewise be strengthened. In the ecosystem of energy generation, transmission, distribution and consumption, extra efforts must be made to enhance the intelligence, resilience and stability of the grid infrastructure in Taiwan; and this encompasses interactions among different forms of energy, smart grids, electric mobility charging infrastructure, energy storage and smart buildings. Indeed, an eco-system that is environmentally friendly for all,” he said.

A second priority for the ECCT is the Talent and Education domain. The chairman pointed out that Taiwan has a strong technical and manufacturing base and that Europe can help to take Taiwan to the next level by combining innovation with manufacturing expertise. Building upon the foundations laid by a high quality of life, universal health coverage, a sound economy and a safe environment, Taiwan has become an increasingly appealing destination and efforts should be made to keep it sustainable, he said. To that end, the chairman reported that the ECCT is launching a platform called the Family Friendly Alliance (FFA, 友善家庭聯盟) which will focus on the issues stemming from an ageing population, low birth rate, shortages of white-collar talent and skilled labourers. While these are issues facing most developed countries for which there are no easy solutions, through the FFA, the ECCT plans to work with corporations, NGOs and the government to find the most practical ways to make Taiwan a friendly place to raise children, improve work-life balance and enable senior citizens to enjoy a healthy and comfortable life. Sharing best practices from Europe will be part of the platform's brief, according to the chairman.

Finally, to ensure healthy and sustainable bilateral economic development between Europe and Taiwan, the chairman introduced the ECCT's proposed European Investment & Business Advisory Platform. With the support of partners from government and industry in Taiwan and the European Union, the platform aims to work to increase the level and scope of bilateral investments, preferably through partnerships with European entities, especially in the strategic and future industry sectors of marine cables, new forms of renewable energy, semiconductors, space technology and mobility, according to the chairman.

In his speech, EETO Head Filip Grzegorzewski emphasised how Europe had changed since Russia's invasion of Ukraine. It had become more united, more ambitious, more aware of the threats and more determined than ever to defend its values, political system, economy, and way of life. He added that it is important that all democracies stand together in the face of aggression and authoritarianism. He thanked President Tsai and the Taiwanese government, for being a true friend of Europe, for their help to Ukraine, and for Taiwan's unwavering commitment to defend democracy and to condemn aggression.

Grzegorzewski went on to say that we need to adapt to a changing world. The days when globalisation seemed unstoppable are gone. “This will create a new challenge for Taiwan, which has flourished through globalisation. The new reality tasks all of us to become more resilient. We have to reinvent the world. Only by working together as like-minded partners, by finding compromises without compromising our values and by respecting international law and principles can we overcome today's problems and mitigate risks for the future,” he said.

The EETO head went on to echo the call by urge the government to remove inbound travel restrictions. While he praised Taiwan's handling of the pandemic, he said that Taiwan's isolation has come at a high cost. “It has always been important to balance public health with individual freedoms and responsibilities. In a democratic society, the end never justifies the means. In a short time, Taiwan has become less international. We look forward to moving on, to being able to fly in and out of the island, and to resume, in the coming weeks, our normal human-to-human contacts,” he said.

He went on to speak about the EU's strengthening ties with Taiwan and cooperation in areas such as securing supply chains, promoting connectivity, maritime security, addressing the climate crisis, cyber security, semiconductors, green economy, digital transformation, countering disinformation or addressing the threats to global health. He said that the EU and Taiwan have jointly decided to upgrade bilateral trade consultations to a Trade and Investment Dialogue.

He highlighted specific opportunities for cooperation: The European Chips Act, which will open a whole new range of prospects for expanding our cooperation in this sector, while the EU's Green Deal and its Carbon Border Adjustment Mechanism will create new opportunities for companies in Europe and in Taiwan. In particular, to promote offshore wind, this year, the EU-Taiwan Offshore Wind Working group was formed. Through this group “we think together how to overcome barriers, such as forced local content requirements. We hope Taiwan will adapt its policies in line with its international commitments and in line with economic logic. Taiwan needs clean and cheap energy. Our cooperation can help achieve this goal,” he said.

In her speech President Tsai President Tsai thanked the EU and its member states for their enduring support for Taiwan, for their continued advocacy for Taiwan's inclusion in the World Health Organization (WHO), and for supporting the security of Taiwan and the region.

The president stated that, as we work to leave the pandemic behind while also facing the challenges of authoritarianism, Taiwan is willing to work together with the EU to assist the global community in economic recovery and to prevent democratic backsliding. The president also emphasized that a Taiwan-EU bilateral investment agreement (BIA) can be a giant step in our progress toward an even stronger partnership, working together as partners and friends to shape a more positive and prosperous future.

The president noted how the European Parliament and parliaments of EU member states have expressed unprecedented levels of support for Taiwan. In particular, last September, the EU included Taiwan explicitly in a joint communication on its Strategy for Cooperation in the Indo-Pacific, which pledged to strengthen cooperation with Taiwan.

In addition, last October, the European Parliament passed a recommendation on EU-Taiwan Political Relations and Cooperation, which then urged the EU to take a proactive role with international partners to safeguard peace and stability across the Taiwan Strait, to sustain democracy in Taiwan, and to include Taiwan as an important partner in the EU's Indo-Pacific Strategy.

More recently, in February this year, the European Parliament passed the Common Foreign and Security Policy (CFSP) and the Common Security and Defense Policy (CSDP), which expresses "grave concern over China's continued military manoeuvres in the Taiwan Strait," and the threats that they pose to peace and stability in the region. And throughout last year, delegations from Europe visited Taiwan via diplomatic bubbles to lend their support and to discuss further cooperation and mutual assistance, she said.

President Tsai said that the government planned to strengthen ties with Europe. As a response to the EU's Global Gateway, the government introduced the Taiwan-Europe Connectivity Initiative. This initiative is a joint effort by multiple government ministries and agencies. As part of this initiative, our National Development Council has established the Central and Eastern European Investment Fund. The fund aims to promote cooperation and development related to semiconductors, biotechnology, laser technology, and other strategic industries.

As the international community is easing pandemic border restrictions, the president said that Taiwan will continue to review and evaluate its measures, border and otherwise, in order to make international travel easier.