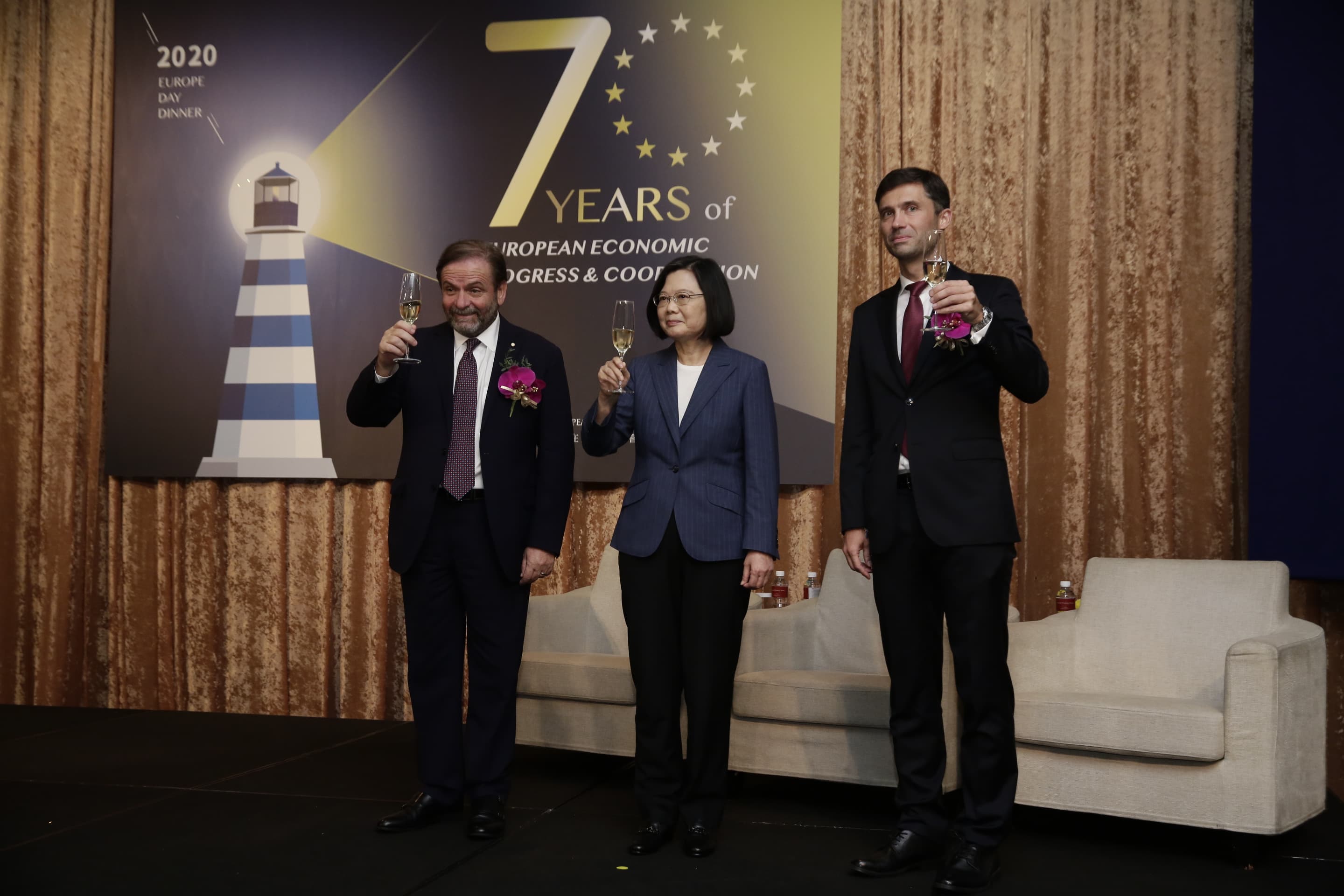 The ECCT's 2020 Europe Day Dinner was attended by distinguished guests including President Tsai Ying-wen, Filip Grzegorzewski, Head of the European Union's (EU) European Economic and Trade Office (EETO) in Taiwan, senior government officials and executives from European and Taiwanese companies. At the dinner, speeches were given by President Tsai, the EETO head and the ECCT chairman. This year's dinner celebrated the 70th anniversary of the Schuman Declaration in 1950, which paved the way for the creation of what has evolved into today's European Union.

In his speech at the dinner, ECCT Chairman Giuseppe Izzo called for increased cooperation with the government in order to build greater resilience in the economy and society. He praised President Tsai and her administration for their enlightened leadership and rapid, proactive and pragmatic actions, which had helped Taiwan to avoid the worst impacts of the coronavirus pandemic. However, he stressed that despite these efforts, given that the pandemic is not yet over, business and government have a responsibility to build a more resilient economy and society.

The chairman lauded Taiwan's healthcare system and officials for their exceptional performance during the pandemic. However, he pointed out that Taiwan's spending on healthcare, at around 6% of GDP compared to around 9% in OECD countries, means that patients sometimes do not get access to advanced healthcare solutions being introduced in other countries that are necessary for an ageing population and an increase in chronic diseases. To improve the resilience of the healthcare system he urged additional investments in disease prevention, treatments and other preparations for possible future pandemics and more flexible business models to increase private sector involvement in healthcare. He went on to reiterate the ECCT's support for Taiwan's meaningful participation in the World Health Organisation (WHO).

This chairman noted that the current crisis also offers a great opportunity to help international companies diversify and strengthen their supply chains by investing in Taiwan. However, the post-Covid-19 economy and supply chain realignment will rely on more than capital. "Taiwan needs to continue to support and follow international standards and best practices if it is to attract the best international companies", he said. "This will be helped by the government's ongoing efforts to create a bilingual nation and the promotion of English fluency in education, government and the private sector".

In addition, Izzo said that more could be done to attract a more diverse range of foreign talent, such as simplifying current recruitment incentive programmes and immigration regulations. He also reiterated that removing the remaining instances of unequal treatment of foreign residents would make foreigners feel more welcome and thereby help to attract and retain foreign talent. Furthermore, in order to foster an environment for building a resilient and dynamic workforce, he said that Taiwan's labour laws need reforms that take into account the complexities of both modern workplaces and remote working.

On the subject of the environment, the chairman said that while the origins of Covid-19 are still uncertain, what is not disputed is that human activities, such as the destruction of forests and wetlands, the trading of wild animals and factory farms, create ideal conditions for pathogens to jump from animals to humans. "We need to rethink our relationship with nature from one of arrogance that we can control nature purely for the benefit of humans. Instead, we need to preserve what is left of the natural world and learn to live in symbiosis with nature. Our future survival depends on it," he said.

He went on to outline some actions that could help to limit the damage from climate change, especially speeding up decarbonisation and working towards creating a completely circular economy. He noted that green energy represents a huge opportunity for Taiwan to provide energy security, reduce pollution and create a whole new high value industry in Taiwan. But micromanaging the process risks derailing local industry development. For this reason, he urged the government to allow the local industry to develop organically and ensure that local content requirements are flexible and adaptable to changing industry trends and standards.

Along with green energy, further electrification of the transport and industrial sectors will greatly reduce Taiwan's carbon emissions, according to the chairman. A successful energy transition will require a roadmap with annual targets for a nationwide electric vehicle charging system that is aligned with international standards. In addition, technologies such as hybrids, fuel cells and renewable synthetic fuels have significant potential. And to compensate for wind and solar fluctuations, smart grids and grid balancing technologies using hydrogen, liquid air or battery storage systems are also necessary, he said.

The chairman concluded that Taiwan has built a strong foundation to protect the health and livelihoods of its people but that Taiwan's future prosperity depends on strengthening resilience at home and maintaining strong links with the world, especially with Europeans and European businesses given that they have played a crucial role in Taiwan's development and have the potential to help build additional resilience in a post-Covid-19 world.

In his speech at the dinner, EETO Head Filip Grzegorzewski stressed the importance of addressing the problems brought about by digitalisation, climate change and opposition to globalisation, which have been magnified by the Covid-19 crisis. He said that Europe is responding to challenges by adopting the Digital Package, which will make Europe make fit for the digital age, the European Green deal and a recovery package of €750 billion. European leaders are also discussing future trade policies to make supply chains more resilient and strengthen multilateralism. He concluded that Taiwan and the EU have many things in common: Both strive and benefit from a free, fair and rule-based global order. Both build their economic successes on open markets and social stability and both have an overriding interest in embracing advanced technology and a sustainable trade agenda. "Notwithstanding the challenges we face, I hope that Taiwan and the EU will continue working together, across distance, through our shared values. By collaboration, we will shape the responses to the difficulties ahead," he said.

In her speech President Tsai thanked the ECCT and EETO for their support of Taiwan participation in the WHO. She went on to talk about EU-Taiwan cooperation during the pandemic, noting that Taiwan had donated millions of masks to European countries while the EU had recently provided Taiwan with vaccines to deal with a skin disease affecting cattle. She went on to list many of the European companies that have invested US$58 billion dollars in Taiwan. She singled out for appreciation those investing in Taiwan's wind energy industry. The president went on to reiterate the government's call for a bilateral investment agreement, which she said could open the door to an even more concrete partnership. She concluded that while 2020 has been a year of many challenges "Taiwan and the EU have already overcome many obstacles in this trying time. The future will undoubtedly be positive and prosperous if we work together as partners and friends".

The Europe Day dinner was an opportunity to enjoy some superb cuisine. The dinner also served as a fund-raising event for charity. During the evening, ECCT Chairman Giuseppe Izzo handed over a donation to the Syin-Lu foundation, represented by its president, Pony Hsu. Established in 1987, the Syin-Lu Foundation is a non-profit organisation that promotes empowerment and economic self-sufficiency for the handicapped in Taiwan. A portion of the proceeds from the dinner have been donated to the foundation, every year for over 20 years.