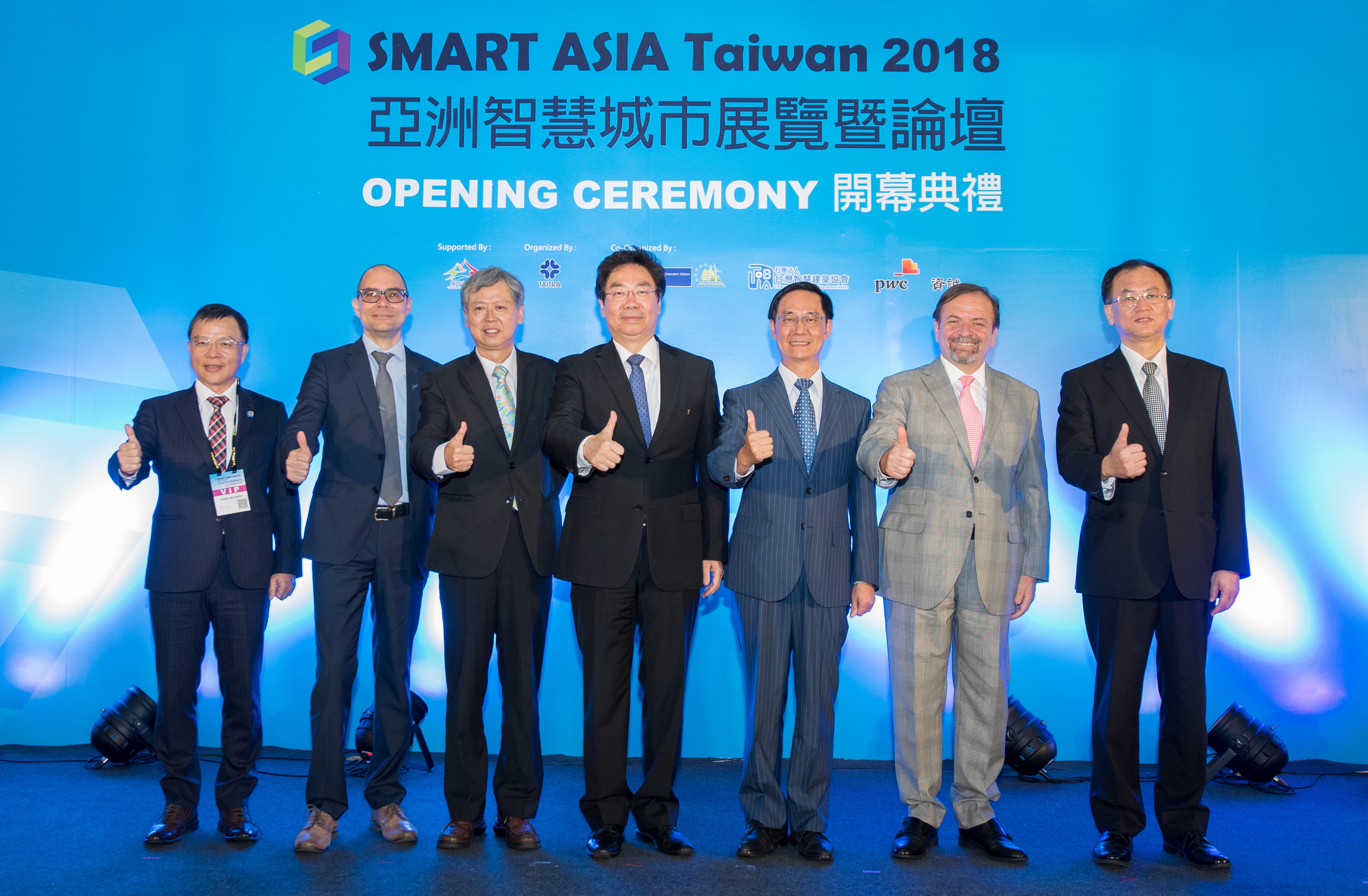 The ECCT's Low Carbon Initiative was a co-organiser to the three-day expo and forum, together with the Taichung City Government and TAITRA. The event(running from 26-28 July) began its opening ceremony with remarks from guests of honour, followed by a series of forums on various topics. ECCT Vice Chairman Giuseppe Izzo represented the ECCT at the opening ceremony together Taichung Mayor Lin Chia-Lung and TAITRA Vice Chairman Chuang Suo-hang. Four LCI member company representatives gave presentations with international and local speakers from government and industry.

On the first day, three of the speakers took part in the afternoon forum on "Smart Manufacturing & Smart Energy", namely Paul Liu, Chairman of PricewaterhouseCoopers Consulting Services Taiwan (PwC); Tino Hildebrand, Vice President of Siemens Taiwan and Bart Linssen, Managing Director of Enercon Taiwan. Another speaker, Arthur Tsai, General Manager, of Thyssenkrupp Elevator (Taiwan) participated in one of two forums on the second day on the subject of "Smart Buildings". The other forum on the second day was on the topic of "Smart Transportation & International Smart Cities in Emerging Markets". On the third day a forum was held on "Smart Healthcare". 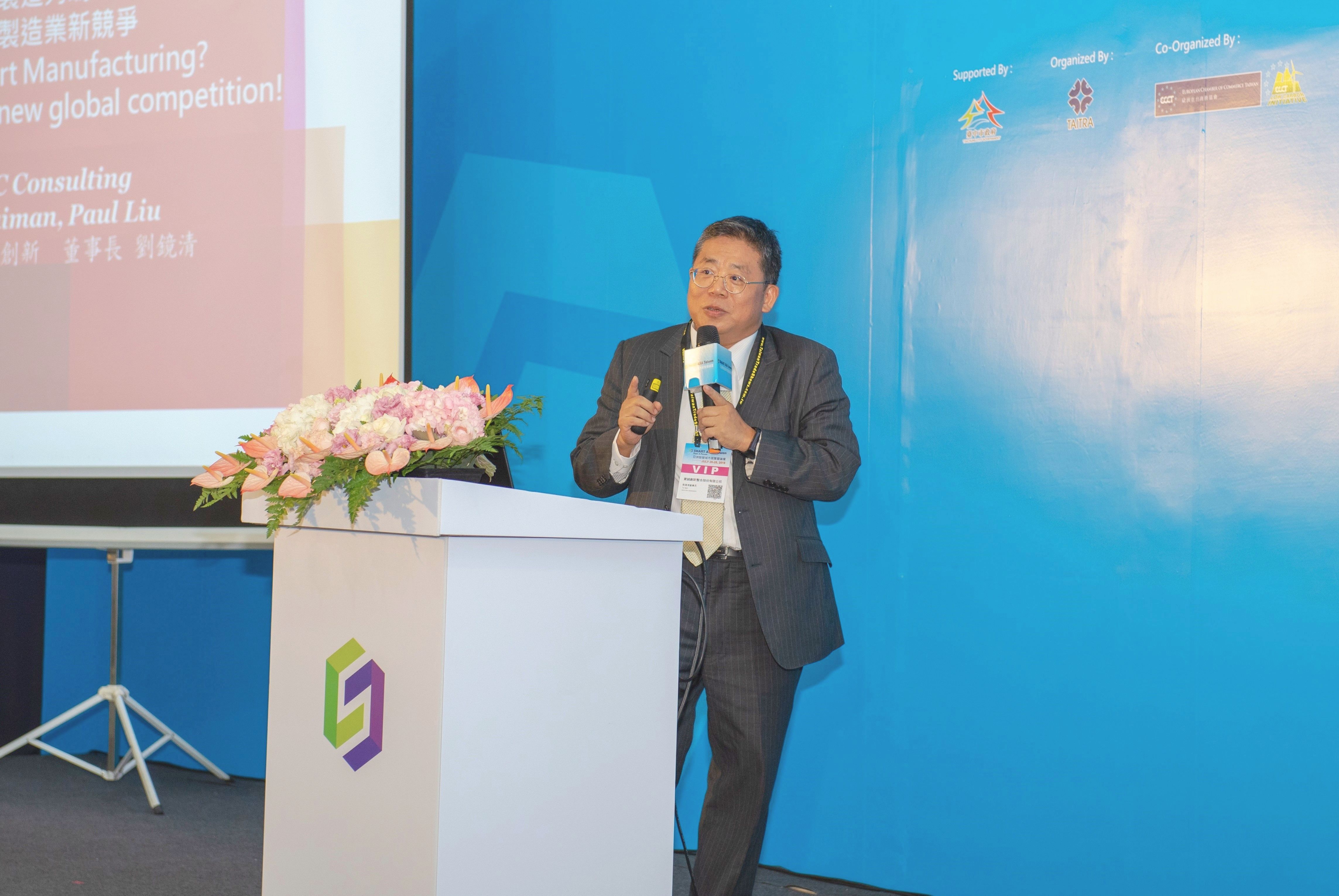 In his presentation, Paul Liu, Chairman of PricewaterhouseCoopers Consulting Services Taiwan (PwC), said that PwC has been engaged in industry 4.0 from the start. As the company was given the realization that industry 4.0 is not just about smart manufacturing, but about implementing digital transformation. Smart manufacturing is a tool, not the purpose. The purpose should be sales driven. PwC has developed a solid methodology to do digital transformation through four different ecosystems.

In summary, start with the customer, set up a strategy, adjust the company's operations, select the right IT system, and then make sure the right people are in the right positions. By doing so, the company can reach industry 4.0 and continue to maintain a leading position in the market. In his presentation, Tino Hildebrand, Vice President of Siemens Taiwan, shared his insights on how digitalization is creating new business models, ecosystems, and transforming the manufacturing industry. He elaborated on Siemens' Digital Enterprise solutions which offers integrated software and hardware solutions, which can seamlessly integrates and digitalizes the entire value chain for manufacturing industries. He also introduced the concept of Digital Twin and MindSphere, the cloud-based open IoT operation system. Proceeding to share some examples of how Digital Twin and MindSphere applications can increase production efficiency and transform data into business value, thereby helping companies realize successful digital transformations. 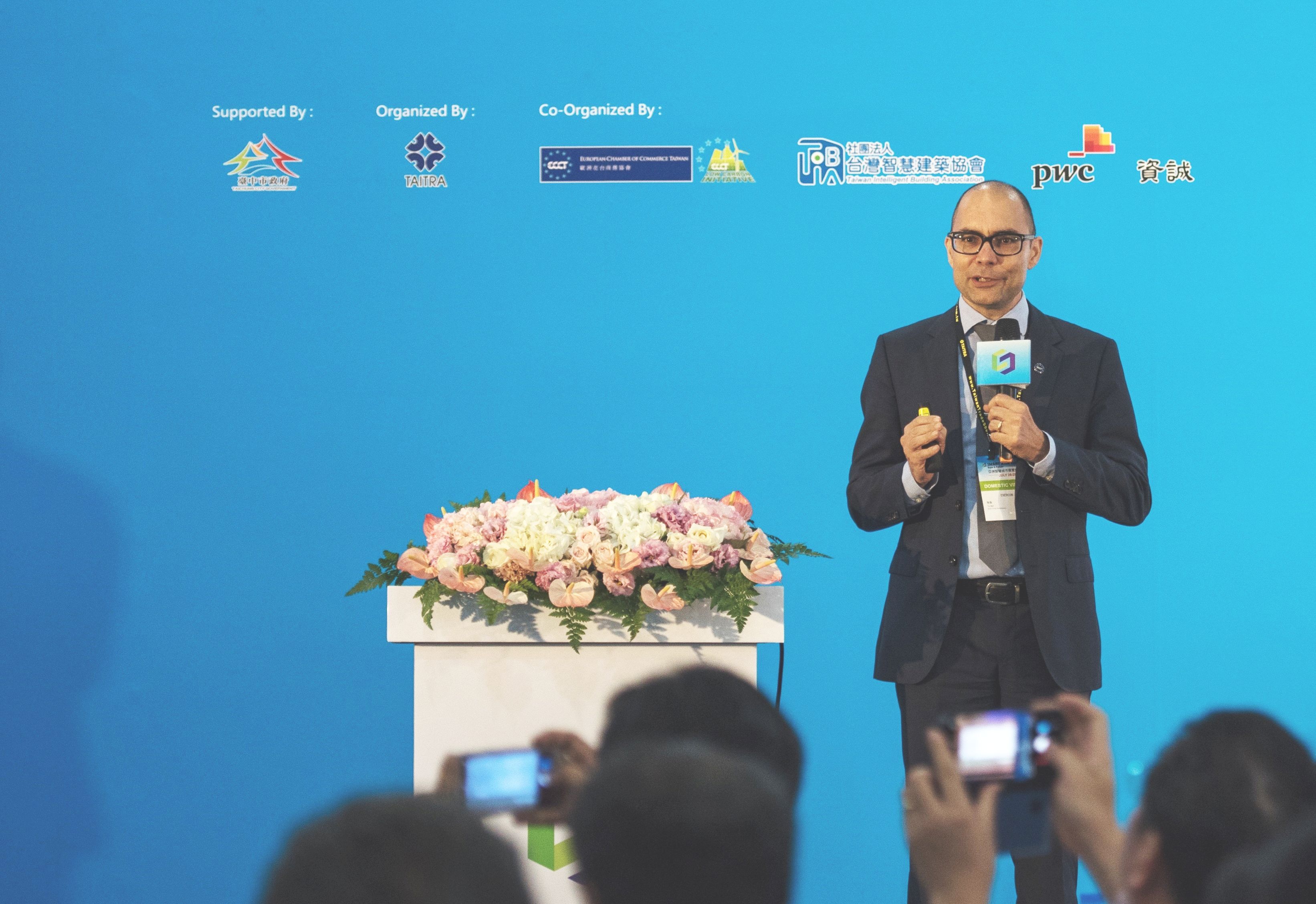 In his presentation, Bart Linssen, Managing Director of Enercon Taiwan, noted that energy generation is responsible for the largest portion of pollution and carbon emissions, and that this portion is increasing as global populations become more urbanized. Due to this, the best way to tackle climate change is to "Plug into green", by tapping into renewable energy sources for the electricity generation.

Aside from the environmental benefits of going green, the rapid reduction in cost for renewable energy in recent years, particularly onshore wind energy, have made the economic case for switching to renewables more compelling. The cost of onshore wind is now comparable to coal-fired power, which is the cheapest form of energy generation. Going green would help to reduce Taiwan's almost NT$2 trillion annual bill for importing fossil fuels. There is also the argument for energy security, which is particularly relevant for Taiwan, which imports almost 98% of its energy requirements.

The health benefits of switching to renewables are also significant. Breathing the air in cities today is equivalent to smoking cigarettes. Great strides have been made in recent years to improve the quality and efficiency of wind turbines. For example, in 15 years of operations in Taiwan, Enercon’s 215 wind turbines have withstood numerous strong typhoons and earthquakes without damage. Modern wind turbines are also extremely quiet and they take up much less space. It takes 16,000 solar panels to produce the same amount of electricity as one wind turbine.

Green energy is also a way to earn income for ordinary citizens. 47% of investors in renewable energy in Germany, for example, are citizens and cooperatives. The momentum towards switching to renewable energy is now also being spurred by large corporations, seeking to reduce their carbon footprints or become carbon neutral. The green energy industry is also a significant employer, providing good and well-paying jobs. Enercon is a good example, as it has set up its regional Asian headquarters in Taiwan In his presentation in the Smart Buildings forum, Arthur Tsai, General Manager, of Thyssenkrupp Elevator (Taiwan), spoke about his company's vertical and horizontal transport solutions. Given the growing urban population, buildings in cities are being made taller to accommodate them. 14 million elevators move over a billion people every day. By 2030 urban energy consumption will increase by 27%.

Thyssenkrupp Elevator produces the only elevator system in the world in which two cabs travel independently of each other in the same shaft. The technology requires 25% less space to transport the same number of passengers. The company's MULTI cable-free elevator system allows several cabs to travel in a single shaft, both vertically and horizontally. The space saving in this system is even higher, cutting by half the elevator footprint in tall buildings.

Using this solution, labour and material expenses are heavily reduced, since the elevators share a single hoistway, landing doors and guide rails. It can also handle more traffic. Unlike a double-deck elevator system, the system can park one cab while the other stays in operation. This way, when passenger volumes are low, no energy is consumed by moving empty cars. Furthermore, all TWIN elevator systems can be equipped with an energy recovery function that can feed about thirty percent of the energy generated by braking back into the building's power grid.