In his speech Chairman Yang said that Taipower was focusing its efforts on energy saving through better management, upgrading existing power plants and increasing the proportion of renewable energy capacity. In the public sector, a dedicated programme was implemented to decrease the Energy Usage Index (EUI) by 4% between 2015 and 2019. For the industrial and service sector, authorities have been implementing energy audit programs and energy conservation requirements, including the mandatory 1% energy saving per year.

Yang noted that new legal requirements for industry to use green energy will result in an increase in demand and that the private sector’s involvement is important to meet this new demand. Advances in wind and solar technology have increased the amount of electricity generated from solar and wind installations. Taipower is also looking into energy storage options, especially batteries and the use of smart grids and Artificial Intelligence (AI), to improve the overall efficiency of the grid. According to Yang, Taipower has accumulated data on electricity usage and is analysing this data to improve all aspects of grid management.

Recent changes in the Electricity Act and the Renewable Energy Development Act (REDA) have increased flexibility in the energy market. For example, since revisions were made to the Electricity Act in 2017, renewable-energy-based electricity enterprises have been allowed to sell electricity directly to private companies, or indirectly to companies through wheeling (the transmission of electricity from suppliers within Taipower’s grid to the companies outside Taipower’s grid boundaries). Taipower, together with other government agencies, is now discussing the timing, method and other details of the process. An announcement to this effect is expected in 2020. In his speech, Lee Chun-li noted that amended legislation aims to make the sale and use of renewable energy simpler and more affordable, as well as increase efficiency and decrease energy intensity. Recently revised renewable energy targets aim to increase installed capacity of wind and solar to over 35 GW by 2035. Large energy users will also be required to use renewable energy and conduct audits of their energy use, on which the BOE will review offer advice for improvements. According to Lee, steady progress is being made in terms of energy savings, which have exceeded the government’s mandatory 1% improvement per year (energy intensity in Taiwan improved by around 1.8% per year during the period from 2009 to 2018). Authorities have also increased the electricity reserve margin to between 10% and 15%, thereby providing confidence to industry that there is sufficient power to meet their needs. 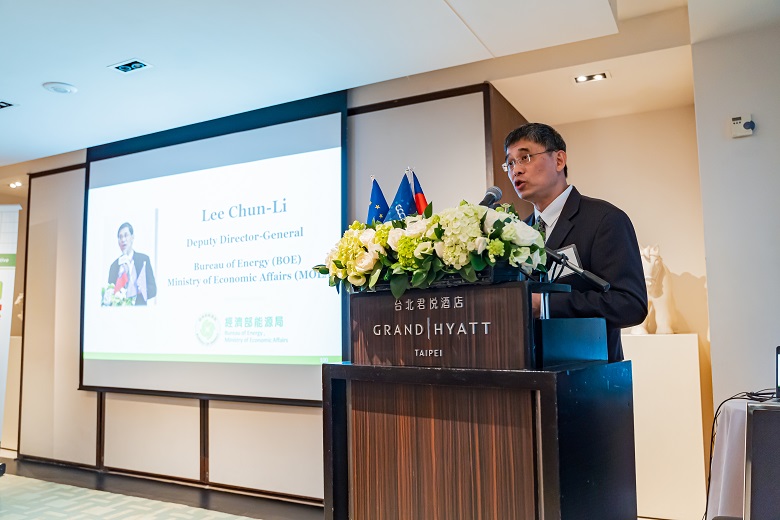 In his presentation, Dr Chang showed a chart of Taiwan’s electricity usage over the past five years, showing that demand is lowest in the winter months and peaks in summer (July and August) at just over 37GW. He noted that rooftop solar installations and energy storage systems could help to reduce demand from the grid, and thereby reduce the need for Taipower to burn fossil fuels.

In order to improve efficiency, Taipower plans to roll out advanced metering infrastructure (AMI) to 3 million users by 2024. This will enable Taipower to more accurately identify areas where savings can be realised and reduce supply and demand imbalances. New tariff plans will be announced next year with power saving incentives for users. 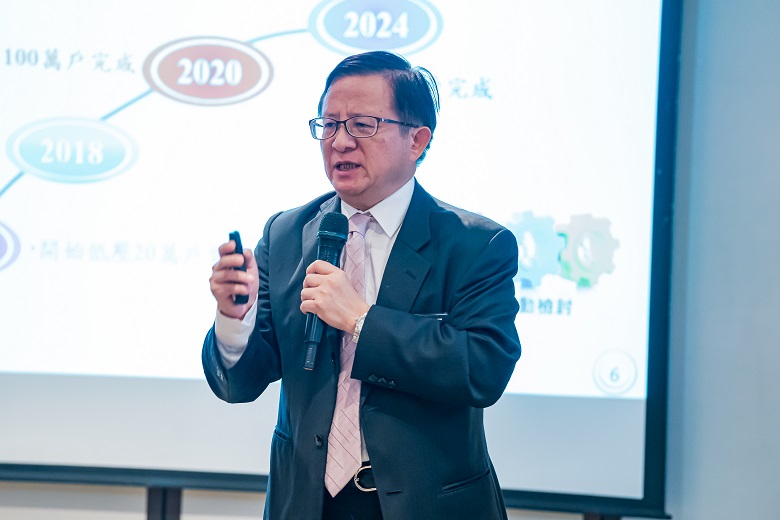 In his presentation John Pien, the General Manager of Grundfos Taiwan Branch (邊士杰博士, 格蘭富公司總經理), gave a presentation titled the “Sustainability Driven Corporate Role on Energy Efficiency” in which he explained how his company, as the largest pump manufacturer in the world is driving both energy efficiency and water conservation, both essential to address climate change. Given the fact that the use of pumps accounts for about 10% of global electricity consumption, switching to energy efficient models could go a long way towards reducing their environmental impact. 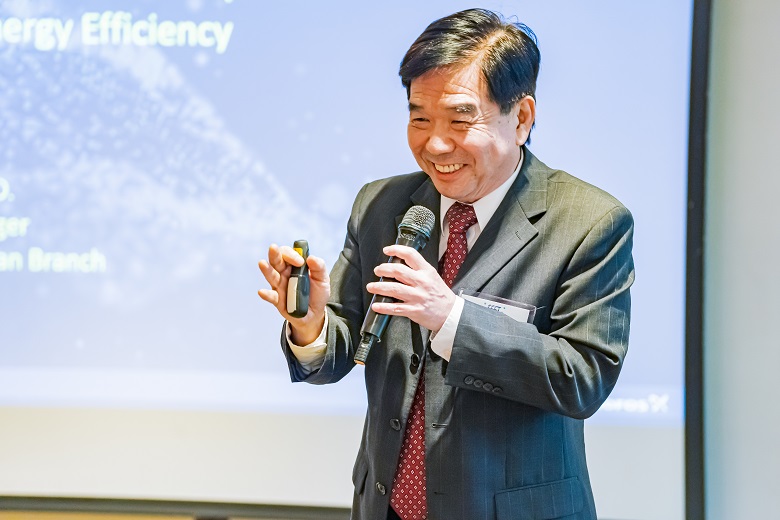 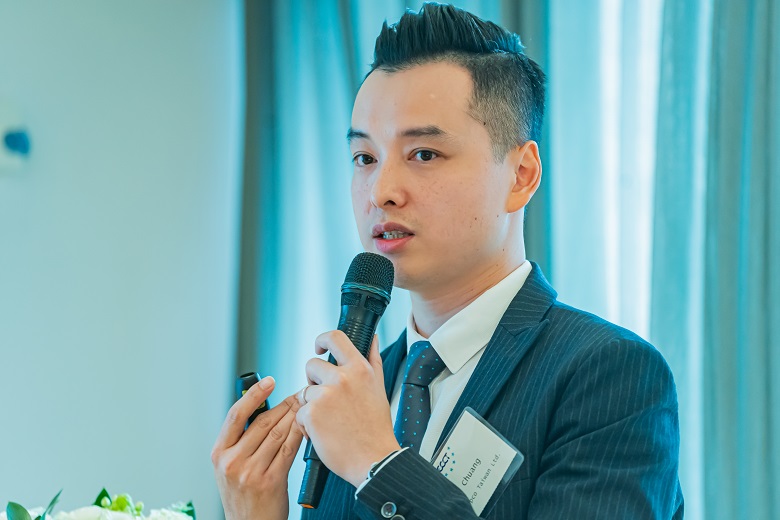 In his presentation, Sean McDermott gave an introduction to the corporate Power Purchase Agreement (PPA), a contract between a corporate buyer and a power producer to purchase electricity at a pre-agreed price for a pre-agreed period of time. He noted that corporate PPAs are being driven by two separate but parallel processes: i) policy commitments; and ii) international corporate social responsibility commitments.

The Renewable Energy Development Act (REDA) was introduced in 2009 to promote RE use in Taiwan. On 12 April 2019, significant changes were made to the REDA in support of creating a TREC market, and thereby supporting Corporate PPAs, including: a formal increase of the RE target to 27 GW by 2025, a formal requirement by large load users to purchase a minimum amount of renewable energy, the ability to sell electricity directly to a corporate off-taker and the ability to switch between a corporate off-taker and Taipower.

The REDA amendments are significant and supportive of RE generation. Nonetheless, the following issues have yet to be fully addressed: 1) The percentage of RE corporations are required to purchase; 2) Penalties for failure to comply; 3) Which companies will be eligible (it has been proposed for companies with contract capacity above 5,000 KW, totalling about 500 companies in Taiwan); 4) TREC price floor.

The BSMI has been designated as the agency in charge of implementing the TREC programme. It has set up the “Taiwan Renewable Energy Certification Center” to prepare a TREC mechanism, including a registry for certification, generation, trading and retirement of TRECs. In Taiwan, eligible project categories for TRECs include onshore wind, offshore wind, solar, biomass, hydro (steam) and geothermal. These projects may all apply to receive TREC certification, and thereafter generate TRECs for sale and retirement by the ultimate user. Once certified, verified renewable energy generators will be eligible to generate one TREC for every megawatt-hour (MWh) of renewable energy produced. 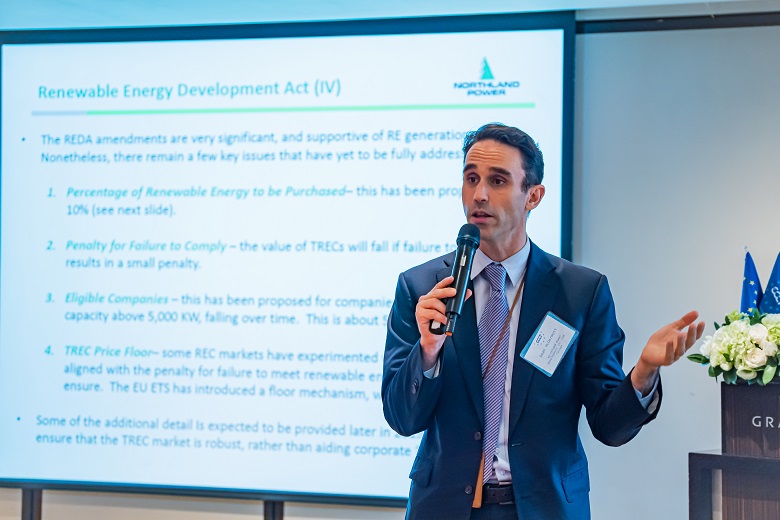 In his presentation, Wu Chih-wei, Director, Electricity Division, BOE (吳志偉, 經濟部能源局電力組組長) gave an overview of legislation and green power trading in Taiwan. He noted that revisions to the REDA which went to effect on 1 May 2019, allow new entrants to freely switch between the Feed-in Tariffs (FIT) system and direct supply or wheeling systems. The act also provides a guaranteed rate for system switching. Meanwhile, revisions to the Electricity Act enable the establishment of Renewable-Energy-Based Electricity Retailing Enterprises, non-public utilities that may purchase electricity generated from renewable energy sources for the purpose of reselling it to users. 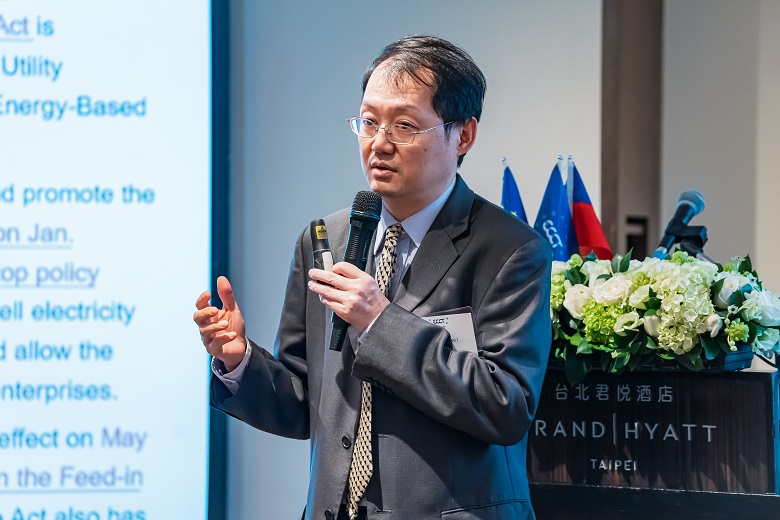 In his presentation, Huang Chih-wen, Director of the National Renewable Energy Certification Center of the BSMI, under the MOEA, (國家再生能源憑證中心主任 黃志文) gave an overview of the TREC mechanism. TREC’s have been issued for three categories of renewable energy so far: wind, solar and biomass. According to Huang, Taiwan’s mechanism ensures that there is no double-counting.

Huang proceeded to describe the process to apply for and sell a TREC through an online platform. The application is reviewed by the certification centre, including on-site verification, before being issued a certificate. 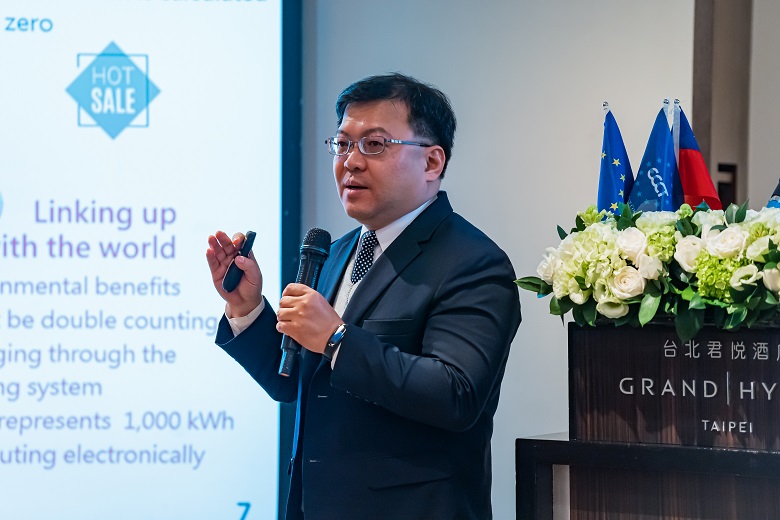 In his presentation, Eric Lin, Managing Director & Of Counsel for PwC Legal Taiwan (林信宏, 普華法律董事暨資深顧問)gave an overview of corporate PPAs. Corporate PPAs benefit developers by providing long term contracts for bankability and a diversified revenue stream and for corporations by locking in electricity costs and meeting renewable energy targets while allowing them to concentrate on their core business. Corporate PPAs can increase the speed and scale of the deployment of renewable energy. Corporations bought a record amount of renewable energy through Corporate PPAs, in 2018, more than doubling the record in 2017. Future market potential is huge. Bloomberg estimates that companies which have committed to reaching 100% of their energy needs from renewables will need to purchase an additional 190TWh of clean electricity in 2030 to meet their targets. 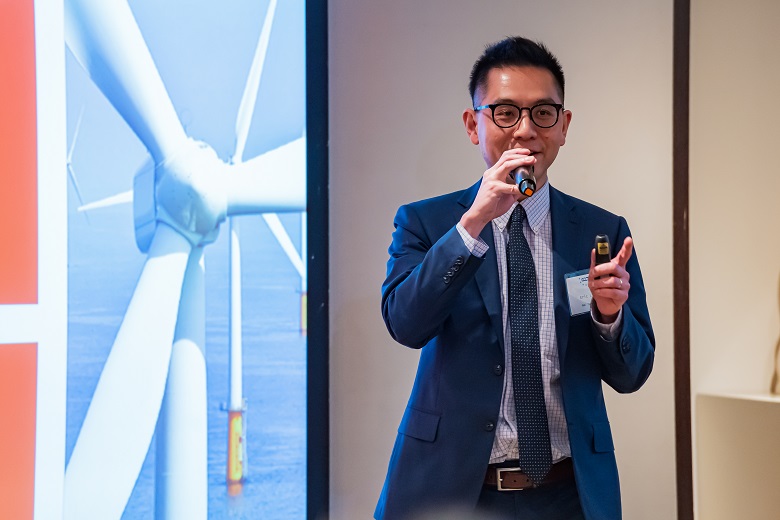 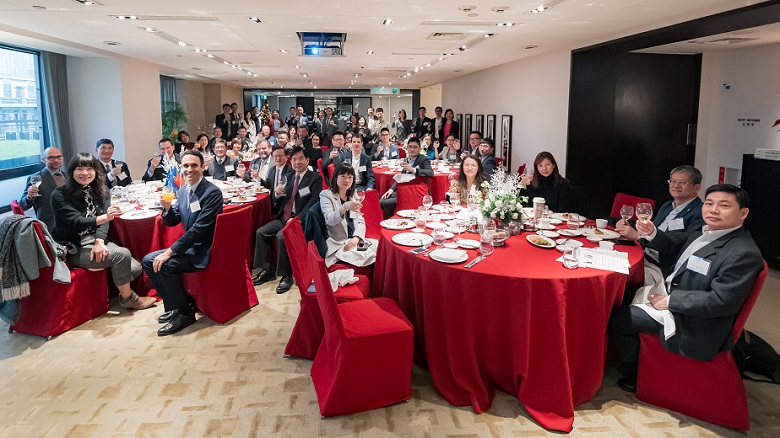