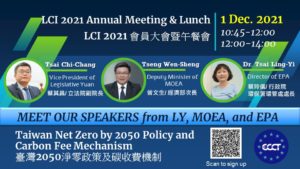 Taiwan’s Legislative Yuan (LY) in 2020 established the Sustainable Development Goals (SDGs) Advisory Council that aims to function as a platform for social cooperation and collaboration between the private and public sectors, social groups and citizens and to act as a bridge between central and local governments on sustainable issues. In February 2021 the LY’s held a joint press conference attended by more than 20 legislators across party lines calling for an amendment of the “Climate Change Action Act” to facilitate net zero carbon emissions for Taiwan by 2050.

On Earth Day (22 April) this year Taiwan announced the intention to achieve net zero carbon emissions by 2050, both via an ongoing energy transformation, and by developing systematic strategies to reduce emissions in sectors such as manufacturing, transportation, residential construction, and agriculture. However, unlike the European Union, Taiwan has yet to announce a roadmap of targets and actions that will be needed for Taiwan to reach net zero by 2050.

To give substance to Taiwan's carbon reduction path, on 13 October Taiwan's Environmental Protection Administration (EPA) declared that the agency has designed a carbon pricing mechanism to charge big emitters for carbon pollution, set out under the the Climate Change Response Act.

As the Ministry of Economic Affairs (MOEA) has authority over economic development, including renewable energy that will play a crucial role in facilitating Taiwan’s road to net zero greenhouse gas emissions by 2050, the MOEA is currently planning to develop renewable energy and hydrogen policy.

Taiwan's legislation has been drafted not only with a view to achieve net zero but also in response to the EU's new Carbon Border Adjustment Mechanism (CBAM), which is set to be implemented on 1 January 2023. Authorities in Taiwan have said that Taiwan's mechanism will be designed to be in compliance with and recognized by the EU and other major countries such as the US and Japan in order to maintain Taiwan's competitiveness and bargaining power in future trade negotiations. Tsai Chi-chang has been the Vice President (or Deputy Speaker) of Taiwan’s Legislative Yuan (LY) since 1 February 2016. He is also the Chairman of the LY’s SDGs Advisory Council and the Commissioner of the Chinese Professional Baseball League. He was elected to the Legislative Yuan in Taichung's first constituency in 2012 and re-elected in 2016 and 2020. For the Democratic Progressive Party (DPP) he has served as Secretary General of Legislative Yuan Caucus, Spokesperson and Commissioner of the Central Standing Committee.  In his role as chairman of the LY’s SDGs Advisory Council, Tsai has been instrumental in driving further meaningful action to meet SDGs and promote low carbon sustainable development in Taiwan.
-

Tseng Wen-Sheng has been the Deputy Minister of the Ministry of Economic Affairs since 2018. He previously held several positions in the Kaohsiung City Government including Specialist in Urban Development Bureau, Advisor and most recently Director General of the Economic Development Bureau.
- 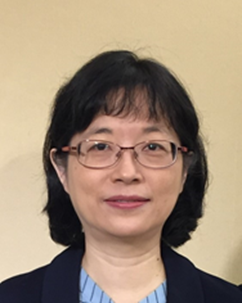 To Cancel without penalty, written cancellations must be received 1 days prior to the event.

*The registration only for ECCT Member and ECCT LCI Member. 報名對象僅限於歐洲商會會員及歐洲商會低碳倡議行動會員。
*The registration will be verified and approved by the event organizer. 主辦單位將保有最後審核及確定報名之權利。
*We reserve the right to amend the agenda and speakers. 主辦單位將有權更改活動議程。