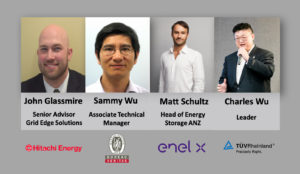 The ECCT's Low Carbon Initiative (LCI) arranged the fourth in its series of joint workshops with Taiwan Power Company (TPC) on the subject of energy storage. The virtual webinar featured opening remarks by Dr Chung Nien-mien, General Manager of TPC's Taiwan Power Research Institute (TPRI, 台電綜合研究所所長 鍾年勉) and Jennifer Wang from the LCI Steering Committee. This was followed by presentations given by representatives from companies involved in energy storage. This online webinar was attended audience of 110 personnel, 70 from the TPC, and 40 from the LCI. 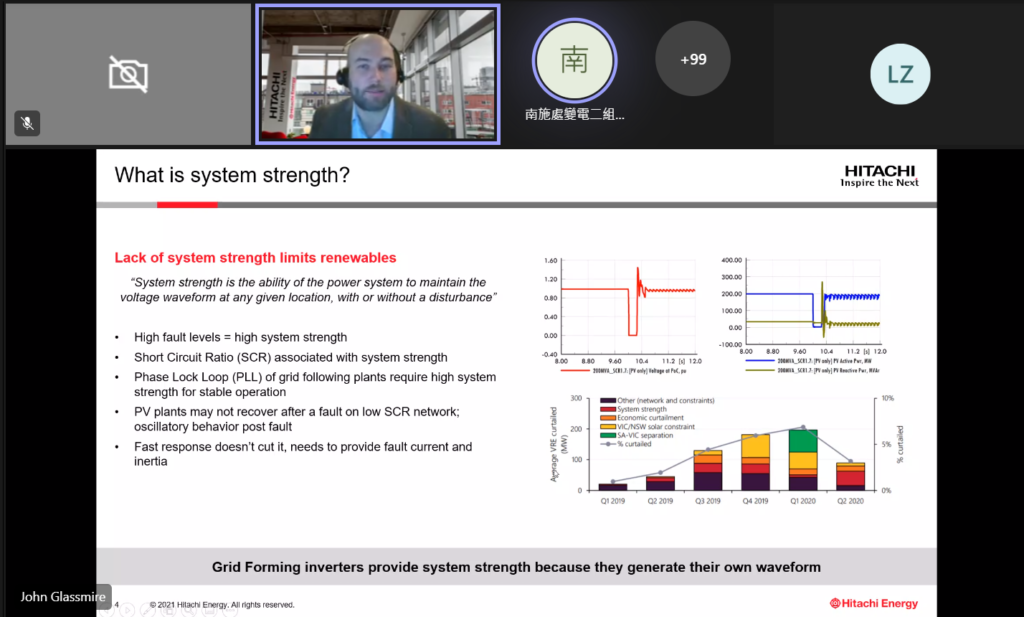 John Glassmire, Senior Advisor of Grid Edge Solutions for Hitachi Energy, gave a presentation about unlocking new revenue and stabilising electric grids with energy storage, in which he shared some his company's experience on a specific project in South Australia.

He noted that over the past five years there has been a speed up in the energy transition away from a reliance on coal in Australia. The significant amount of wind and solar capacity added to the grid has changed the characteristics of the grid and power network.

Glassmire went on to explain the technical means of keeping grid stability when renewables are an increasing portion of capacity. He used as an example his company's battery storage project system located near a 91MW wind farm, which has 30MW of battery storage. He explained the difference between Grid Following (GFL) and Grid Forming (GFM) inverters and how Hitachi's solution works differently to other energy storage systems to provide virtual inertia, system strength and other services. The company's Dalrymple BESS project in Australia is the first and only large-scale grid forming energy storage system in Australia's grid, and largest such system in the world. The technology can de-risk the interconnection of a renewable project, unlock new revenue streams and support the broader, clean energy transition. It has demonstrated these new services as well as a strong financial return through regulated network services and unregulated energy market services. 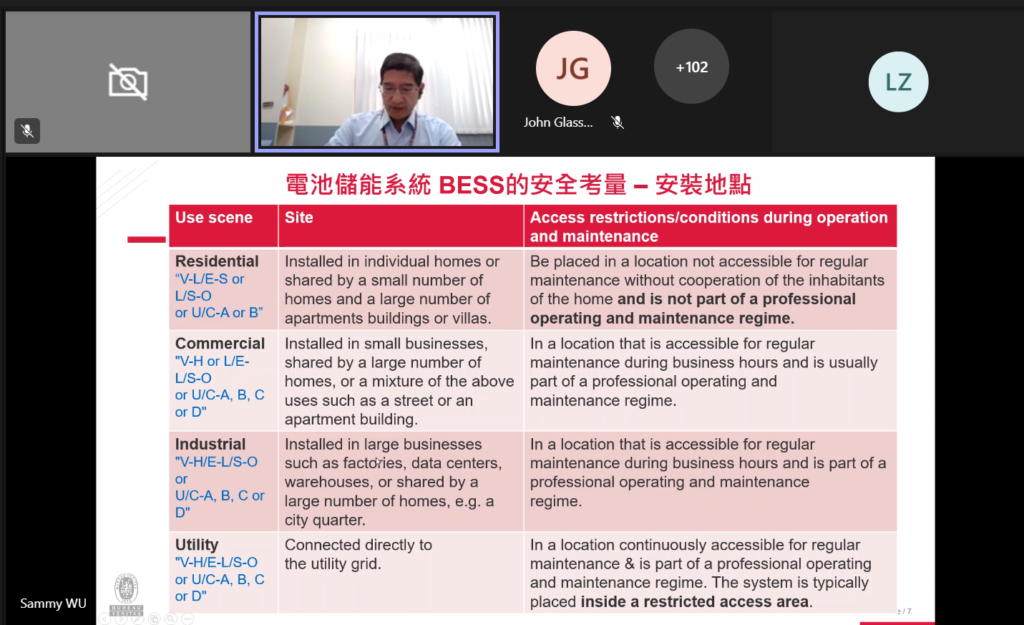 Sammy Wu, Associate Technical Manager at Bureau Veritas (香港商立德國際商品試驗有限公司桃園分公司技術經理 吳讚民) gave a presentation on the topic of the safety and grid-connection solution of energy storage systems. He began by introducing his company, founded in 1828 and headquartered in France.

He noted that battery electric storage systems (BESS) come in variety of voltage, energy capacity, site occupancy and chemistry types, all of which need to be taken into consideration in safety standards.

Standards and access restrictions during operation and maintenance depend on the type and location of the system. All phases of the life cycle from manufacturing to transport to operation, maintenance and eventual repurposing have specific standards covering all safety and performance issues, including electrical (such as shock), mechanical (such as vibration during transport and seismic events) and other hazards (such as fire).

He went on to list the international standards applicable to BESS, including physical, supply chain and cybersecurity risk aspects.

Enel is Europe's largest utility and a leader in the energy transition with 86GW of power generation in 34 countries and 2.2m km of power lines. The company already has 49GW of renewable capacity and a target to reach 68GW by 2023, and to phase out coal.

He noted that Australia generated 95% of all energy from coal in 2000. The development of green energy started to pick up 10 years ago. Last year saw total installed capacity in solar reached 14GW in the east coast market while South Australia has the highest percentage of variable renewable capacity at 60% of all generation in 2020. By 2030 all Australian states have variable renewable targets of over 50%. Integrating them into the grid will bring several challenges.

The lack of control is one of the major challenges of integrating renewable energy capacity into the grid, especially given the fact that 14GW of capacity is multiple small scale rooftop solar systems. Inertia, frequency deviation, fast ramping capacity, thermal reliability are other challenges.

One of the great advantages of batteries is their scalability. Schultz went on to describe a case study of a 150MW BESS in Australia and another example which provides power for five industrial sites.

He reported that Australia currently has BESS capacity of 305MW, another 830MW under construction and 4GW announced. Implementing these systems will make blackouts a thing of the past. 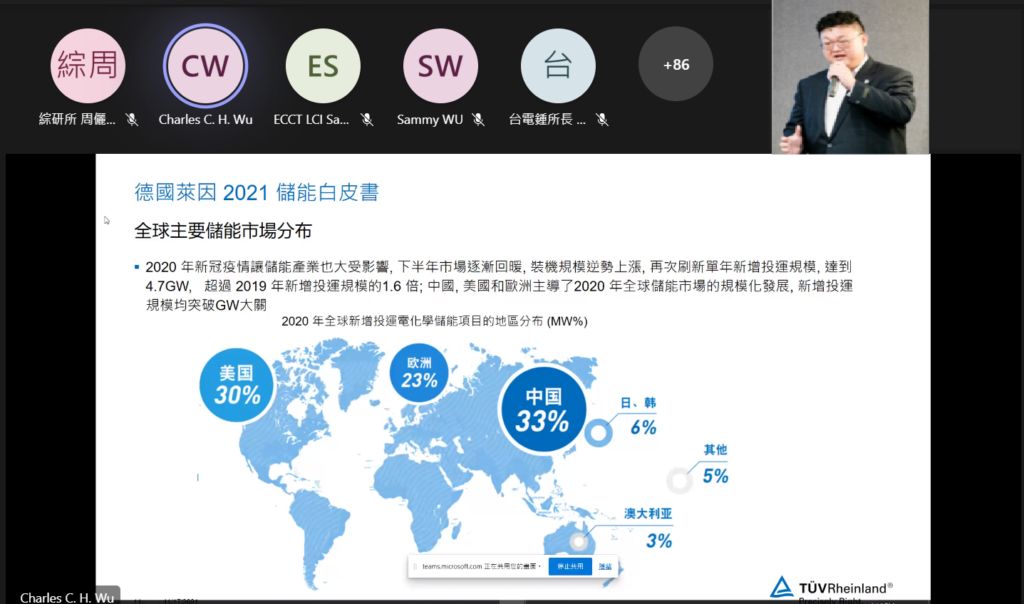 In his presentation Charles Wu, Leader, TÜV Rheinland (德國萊因產品服務業務部與關鍵客管理 組長 鄔承孝) spoke about international approval of ESS and gave a market overview. He began by introducing his company, founded in Germany more than 150 years ago.

The company offers a full range of testing and certification services for solar PV panels and other renewable energy systems to cater to rapidly growing market.

He went on to list some of the technical challenges involved in ESS, including safety issues, and gave details about some of the certification and testing standards applicable to ESS. He went on to give an overview of market developments in several markets, including South Korea, the United States, Australia, and China.