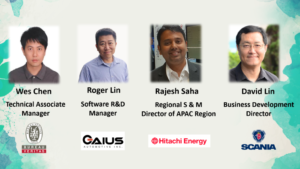 -
The ECCT’s Low Carbon Initiative (LCI) arranged a virtual workshop together with Taiwan Power Company (Taipower) on the topic of power issues in the development of electric vehicles (EVs). It was the fifth in the series of LCI-Taipower workshops and the first of 2022. This online webinar was attended audience of 100 personnel, 70 from the TPC, and 30 from the LCI.
- 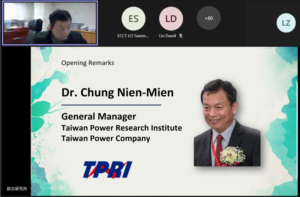 In his presentation, Wes Chen gave an introduction to domestic and foreign certification of electric vehicle chargers. Europe is leading in the transition to EVs. Norway is ahead of other countries, but most other European countries plan to phase out Internal Combustion Engine (ICE) vehicles within the next few years. For example, The Netherlands is expected to completely ban the sale of ICE vehicles in 2025 and the UK plans to ban the sale of ICE vehicles by 2035. The speaker cited data from Bloomberg (BNEF), predicting that the sales of electric vehicles in 2023 will reach 5.4 million units with a market share of 7%, and it is estimated that 58% of the global passenger car sales in 2040 will be EVs.
-

-
Charging has always been a topic of high concern in the development of electric vehicles, such as cruising range, charging time and the lack of charging facilities. Charging not only involves construction, such as the distribution points of charging stations and swap stations but changes in driving behaviour need to be considered before building a charging station.

There are currently four mainstream electric vehicle charging standards globally: CCS1, CCS2, CHAdeMo and GB/T. To address the issue of incompatibility of charging, the Industrial Technology Research Institute (ITRI) is cooperating with nearly 50 stakeholders to establish the "Taiwan Electric Vehicle Power Supplement Production Industry Technology Promotion Alliance”. The alliance recently, jointly suggested that the charging interface of electric vehicles in public charging stations should adopt the most common charging interface in Europe and the United States. In future, as demand for charging increases, there are concerns about overloading the grid. Addressing this will first require the collection and analysis of more data.

The speaker went on to introduced charging pile connector types. SAE J1772 is a standard set by the Society of Vehicle Engineers (SAE) in 2010 for AC use only. IEC 62196 is a standard set by the International Electrotechnical Commission (IEC). It supports both single-phase and three-phase power and is widely supported by European car manufacturers.

-
He went on to introduce various socket standards. The Combo socket can allow slow charging and fast charging of electric vehicles. It is currently the most widely used socket type in Europe. The biggest benefit of the Combo Connector is that in the future, automakers can use a socket on their new models, not only for 1st generation smaller size basic AC connector, also suitable for 2nd generation larger size Combo Connector which can provide DC and AC currents, charging at two different speeds respectively. The disadvantage is that fast charge mode requires up to 500 volts and 200 amps from the charging station.

The advantages of the CHAdeMO standard (widely used is Japan) is that the communication stability and reliability are high. However, CHAdeMO was originally designed with a charging output of 100 kW while the connector is very bulky, and the output power of the charging car is only 50 kW. The Tesla standard, although highly efficient, is not compatible with the national standards of various countries.

The speaker went on to explain the various tests that must be conducted on charging equipment.
-

-
In his presentation, Roger Lin outlined some of the challenges facing the EV charging eco-system. The company has designed a three-wheel delivery vehicle for the logistics industry but also provides a charging and intelligent fleet management system that shows a vehicle’s location, daily energy consumption and maintenance and repair information. There are three main charging use cases: home and work charging (primarily private and slow), en-route charging (primarily public high-power charging) and destination charging (public, both fast and slow).

Comparing battery charging versus battery swapping, charging can be done while vehicles are not in use and is cheap. While battery swapping is fast, it is only as convenient as the extent of the network and more expensive to install and operate.​

Gaius is able to install a charging pile for around NT$10,000 in a short period of time, which can be shared by 8-10 vehicles. In contrast, it costs from NT$800,000 to NT$1.5 million to install a battery swapping station, not including the purchase or rent of land. Moreover, the battery swapping system needs to have an excess of batteries to provide convenience to users, raising the question as to what to do with the batteries when they reach the end of their useful lives. Battery swapping is also only suitable for motor-scooters and would be impractical for larger vehicles.
- 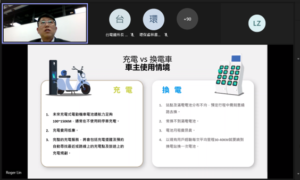 Nevertheless, there are still questions to be answered about the optimal business model for charging. To address the question of how to charge users for charging their vehicles, the speaker introduced the concept of using a cloud meter, which allows owners to charge their vehicles while being billed for the service automatically.
-

For electric buses, the company offers both large-scale charging, a management and fleet optimisation system and flash-charging at various points along bus routes. This is important for BRT systems because it allows buses to get a significant charging boost in just a few seconds while the vehicle is stationary. Having this option means that buses do not need to install such large batteries, which reduces their weight and costs. According to Saha, these buses are 40% less expensive because of need for smaller batteries.
-

-
The flash-charging systems are installed at some bus stops where a robotic arm connects to the bus for a few seconds. Besides reducing the need for on-board batteries, the system works well for long articulated buses that have high capacity and high frequency and therefore require a large amount of power.

Hitachi’s depot charging system is compact, requires little space and is containerised to reduce wear and tear and maintenance. Only charging piles need to be installed. All other equipment is inside a single container. This resolves a critical challenge for bus operators of reducing space. 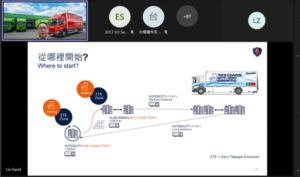 -
David Lin gave a presentation on electrification for heavy-duty vehicles. The company provides buses, trucks (including fire trucks) in Taiwan. He noted that the company has been rapidly reducing the fuel emissions of its vehicles over the past 25 years in line with Euro 2 to Euro 6 standards.
-

-
Electrification will happen faster than currently expected. Up to 50% of heavy vehicles will electrified by 2030. This will start with intercity routes of less than 100km.

The standard connector is CCS2 using DC charging. Many of Scania’s buses use flash pantograph charging (as described by Saha). Some trucks make use of overhead charging cables installed along highways to charge on parts of their routes while the newest technology uses contactless charging.