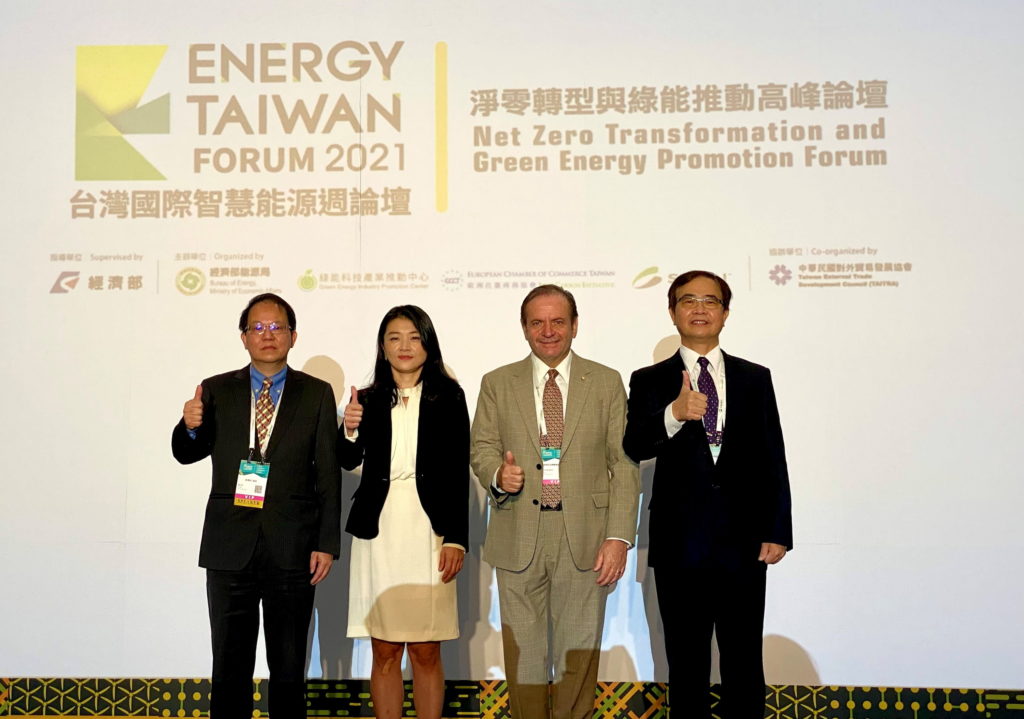 Photo Gallery: Facebook
-
The Net Zero Transformation and Green Energy Promotion Forum (淨零轉型與綠能推動高峰論壇) was one of a series events held as part of the Energy Taiwan Forum 2021. It was arranged by the ECCT’s Low Carbon Initiative (LCI) together with SEMI, the Bureau of Energy (BOE) and the Green Energy Industry Promotion Center (GEIPC) under the Ministry of Economic Affairs. Held in a hybrid, live and online format, the full day forum began with opening remarks by ECCT Vice Chairman Giuseppe Izzo and Joanne Su, Senior Director of SEMI. This was followed by presentations by government and industry experts in three sessions on the topics: 1) New target of energy transformation - Accelerating net zero, 2) New business opportunities - practical guide for industrial transformation, and 3) New fashion of green living - To an eco-friendly and sustainable future. 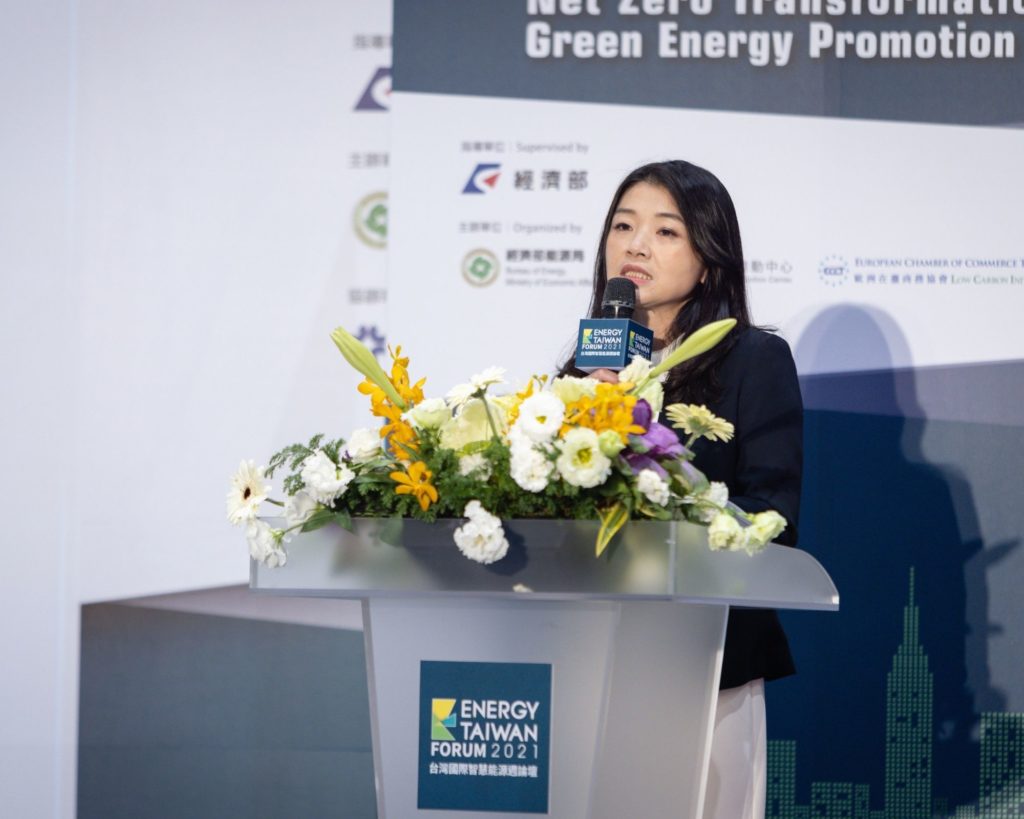 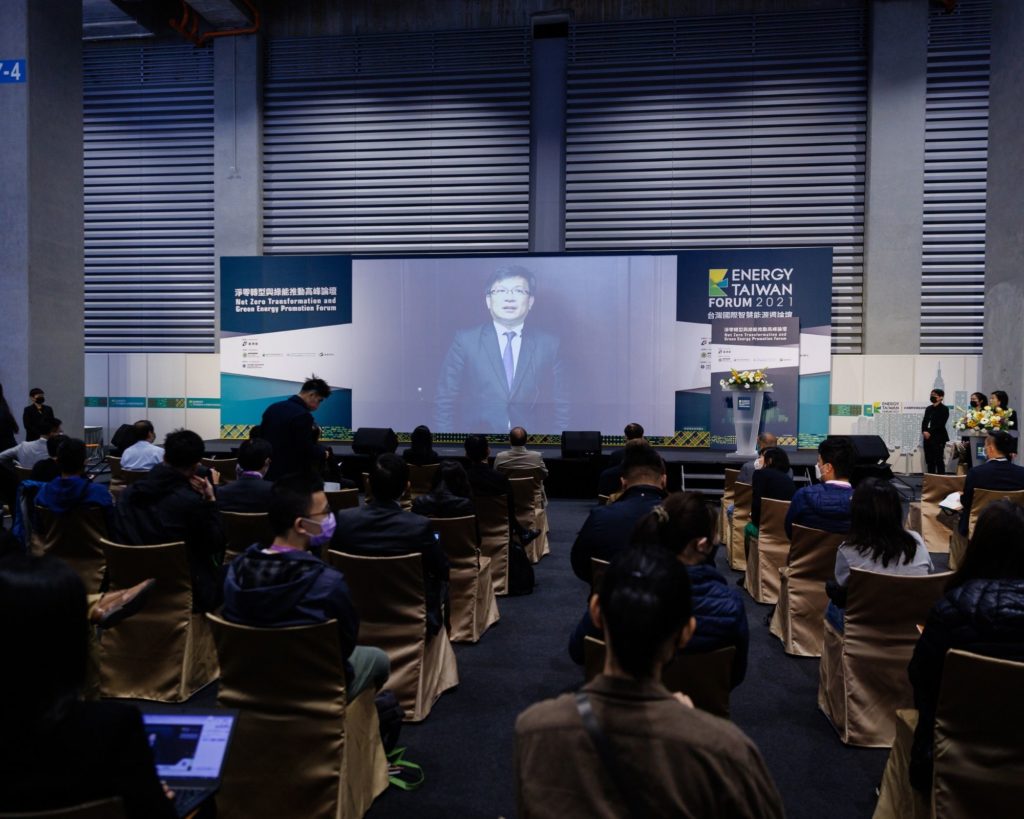 -
In his recorded presentation, MOEA Deputy Minister Tseng Wen-sheng gave an overview of Taiwan’s energy transition plans, covering electricity generation and industry. In addition to increasing efficiency in the use of energy in both electricity generation and industry, Taiwan is also exploring other options to reduce emissions, such as carbon capture and storage and promoting circular economy business models. In addition to wind and solar, Taiwan also plans to make greater use of other renewable sources, such as geothermal and ocean (wave) energy as well as using renewable energy to produce green hydrogen. Deputy Minster Tseng also mentioned the use of co-firing generators, using a combination of fossil fuels and ammonia, as well as carbon capture and storage.

Helping energy intensive industries to reduce their energy usage is part of the government’s efforts. He noted that large petrochemical, steel, and cement companies are looking at using alternative technologies and circular economy business models. They will do so by optimising their production processes, and then share these methods with other in their supply chains.

On the topic of carbon fees and carbon trading, the government is now looking at ways to levy a carbon fee and create carbon credits which can be traded in the market.

He emphasised that all industries have to work together. Given that Taiwan is a member of global village it needs to keep up with the rest of the world, but it is also important that large players share technologies. He added that Taiwan would also work with neighbouring countries to coordinate carbon emission reduction efforts. 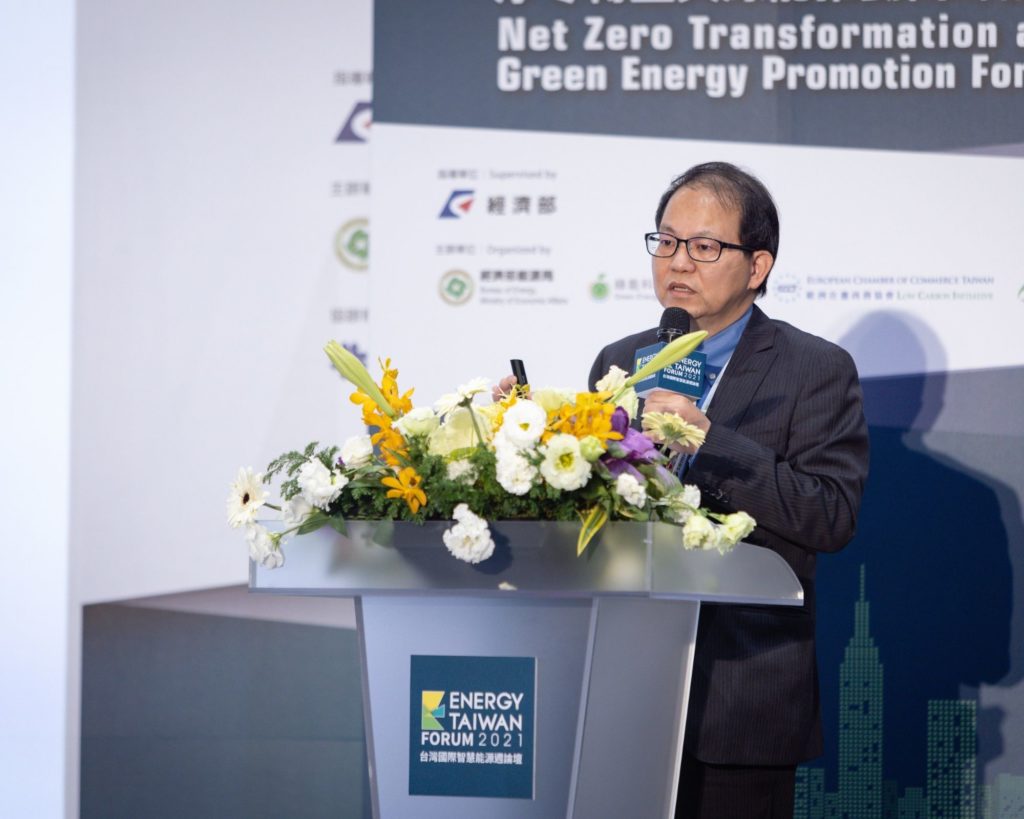 In his presentation, Lu Wen-Tsan, Deputy Director of the MOEA’s Industrial Development Bureau (IDB), spoke about PV and offshore wind industrial strategies. He noted that both Taiwan and Europe view renewable energy development not only as an environmental strategy but as a way to boost the economy and create jobs.

He noted that Taiwan has a comprehensive PV supply chain in place. Efficient modules enjoy higher feed-in-tariff rate of NT$6, which has encouraged developers to increase capacity. However, challenges remain for the PV industry. These include limited land availability, international competition, and the need to upgrade to more advanced technologies.

In offshore wind, Taiwan has ambitions to partner with foreign players to develop into a regional hub, although local content requirements remain a challenge for international developers. 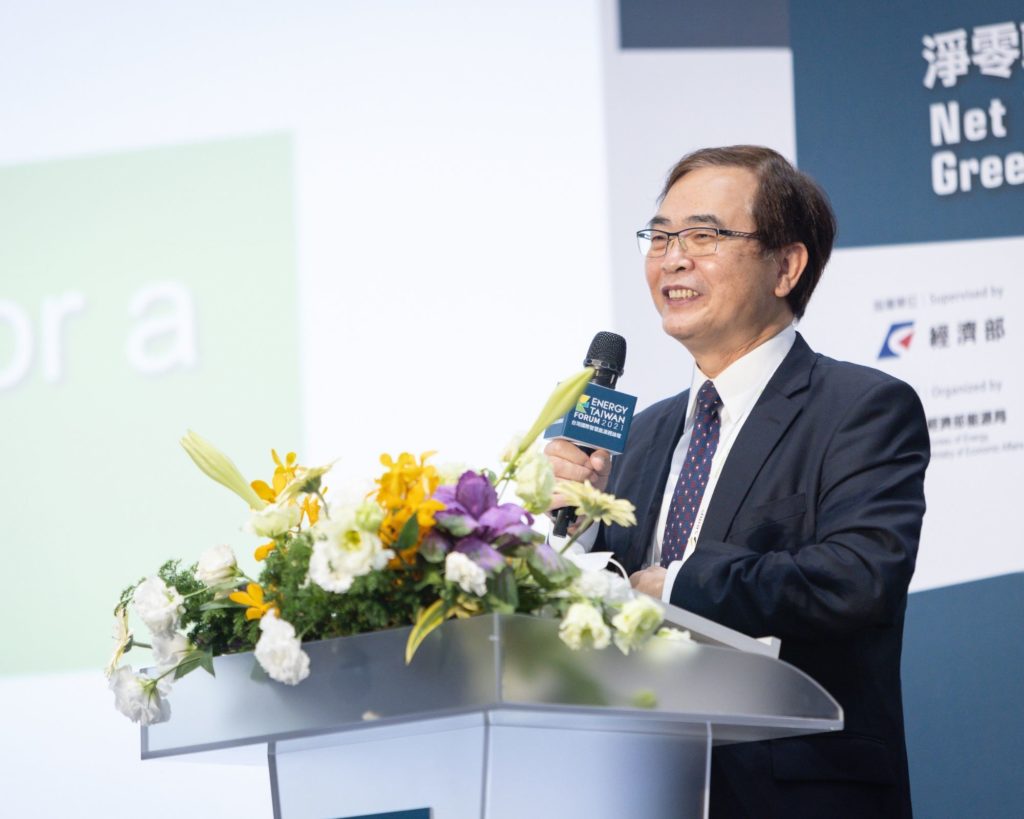 The IDB is assisting industry to decarbonise. For example, Chen said that the IDB has allocated a budget for subsidies to help companies to convert boilers that are powered by oil to natural gas. Developing and promoting hydrogen and CCS are also both part of the government’s plans. This includes helping manufacturers to produce steel with hydrogen as a fuel source. The IDB has five main strategies:

Improving energy efficiency: The IDB hires engineers to visit factories and advise companies on how to improve energy efficiency through systematic and smart management and digital transformation.

Switching to low carbon fuels: This is a first step in the energy transition which will later be replaced with zero carbon sources.

Circular economy: Every substance that is now considered waste should be used as a raw material for another process. For example, sludge can be used for biomass, fly ash can be used to replace cement clinker and paper fibre and waste plastics can be reused or burnt as fuel.

Technological innovation, including developing CCS, energy storage solutions and green hydrogen. He noted that Taiwan is talking with Australia to purchase liquid hydrogen for vehicles and boilers.

Chen went on to share various case studies, including a CCS case study involving China Steel and CPC, energy efficiency dying machines in the textile industry, and a local paper producer, which uses biomass to replace coal as an energy source. 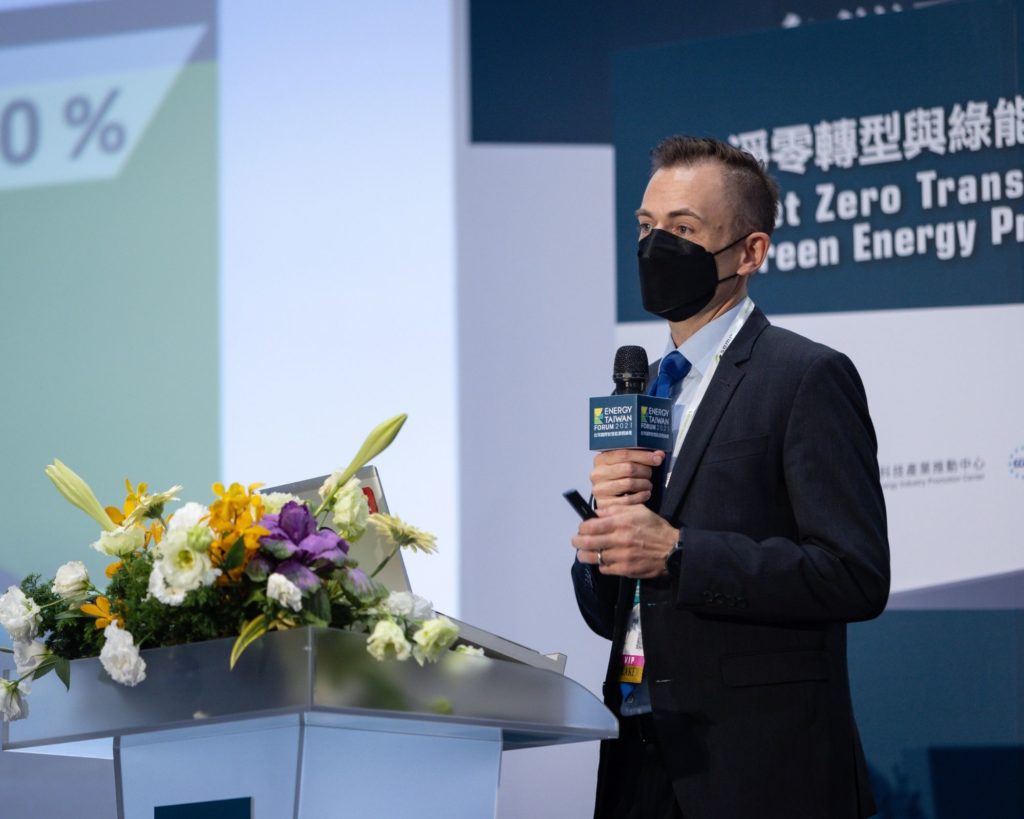 -
In his presentation, Ralph Uhlmann, Business Development Manager of Porsche Taiwan Motors Ltd spoke about electrification in Taiwan and the Taycan electric race car. He noted that the automotive industry is undergoing a rapid transformation. Porsche has a goal by 2025 for 50% of its vehicles to be partially or fully electric and by 2030 80% of vehicles will be electrified. 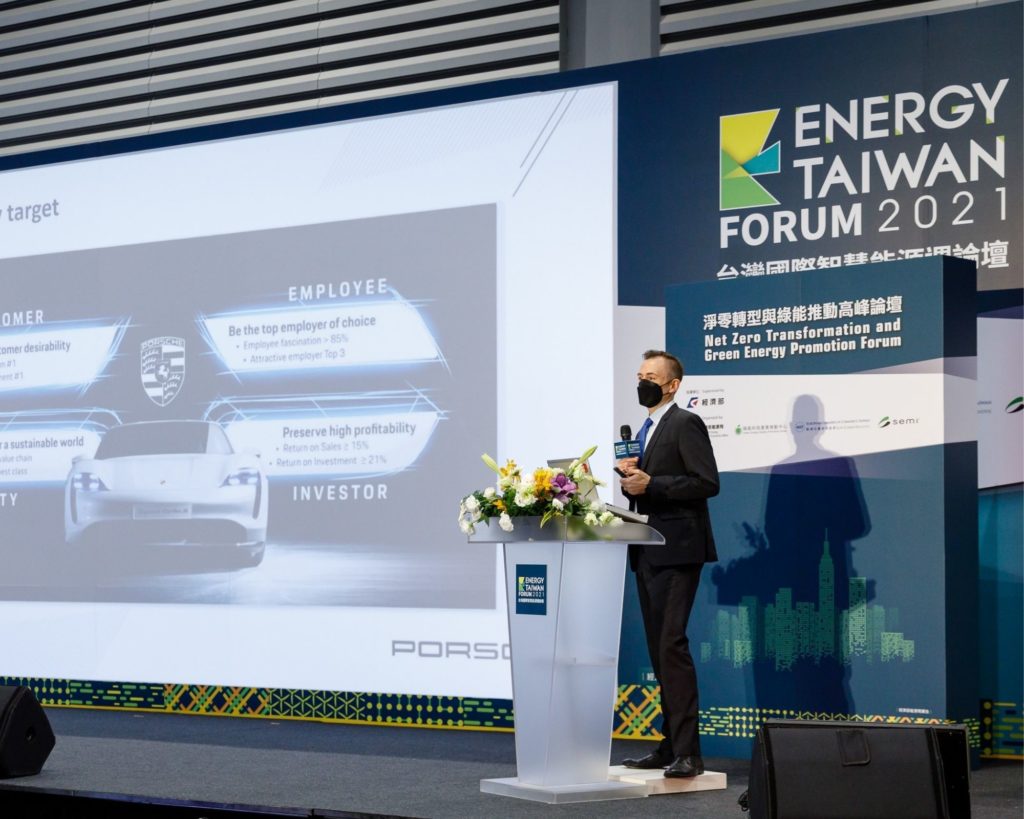 Porsche has set a new standard for four-door, all-electric sports cars. Its prototype Taycan model, over a period of 24 hours covered a distance of 3,425 kilometres as part of a test in Italy and has also been tested on racetracks in Germany. The car performed well with speeds of between 195 and 215 km/h and with peak outside temperatures of 42 degrees Celsius and a track temperature of up to 54 degrees Celsius. Tests have been completed without interruptions, except for quick charging stops.

Porsche plans to offset its CO2 footprint in Taiwan and committed to reaching a goal to become CO2 neutral in all its activities by 2030. The long-term goal is to power all EVs with green energy although this is not possible at the moment because there is not sufficient renewable energy capacity. 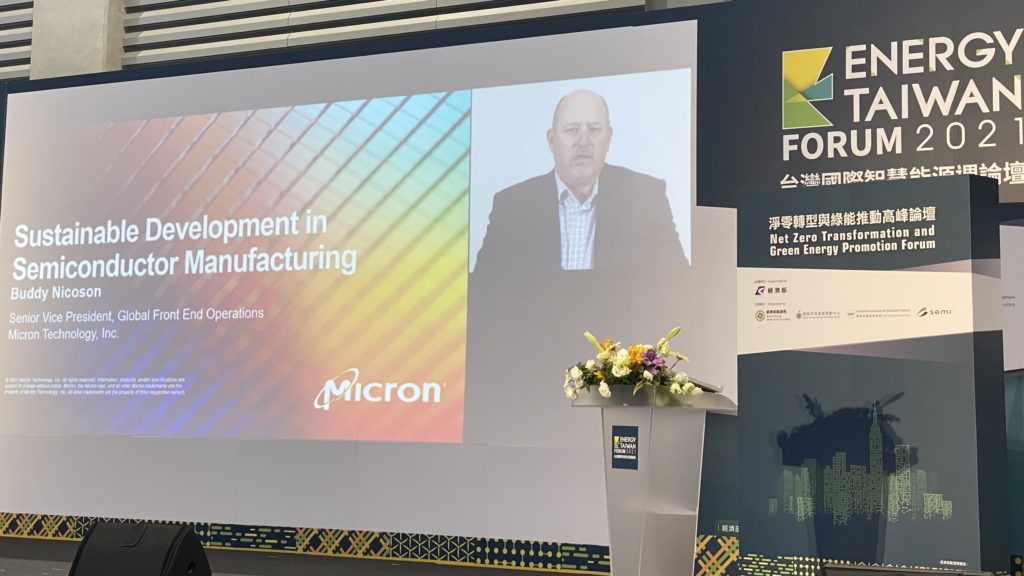 Buddy Nicosan, Senior Vice President of Global Front End Operations at Micron gave a presentation on the topic of sustainable development in the semiconductor industry. He noted how higher bit density has enabled reduction in energy both for manufacturing and use by the end product. 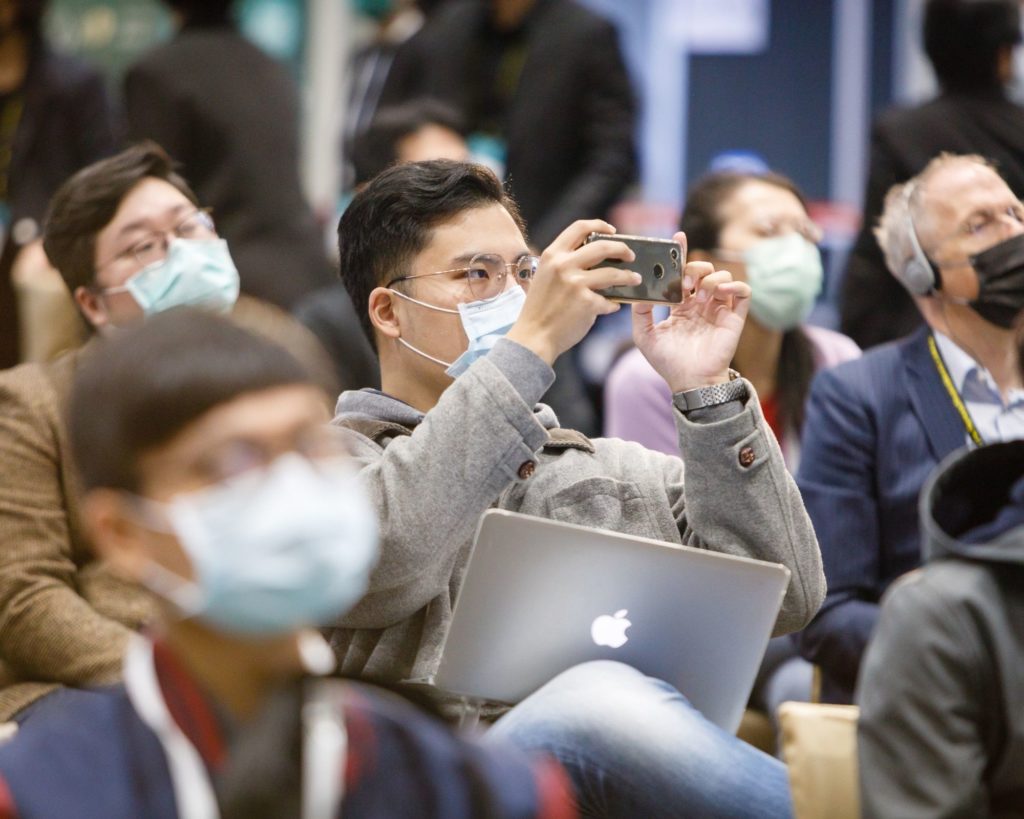 Energy demand by the semiconductor industry is rising 8% per year given the faster adoption of 5G, AI and other technologies. The company will invest US$1 billion investment in the next 5-7 years to advance sustainability programme to reduce emissions by 75% by 2030, use 100% renewables by 2025 and eventually reach carbon neutrality. 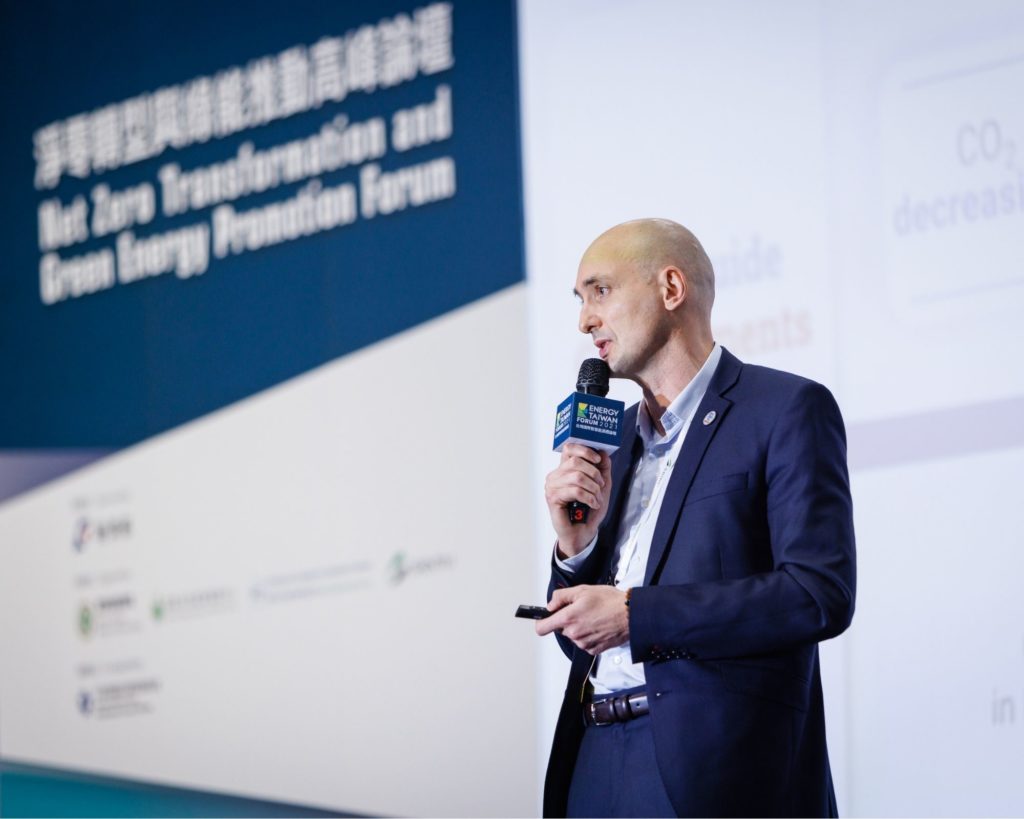 Olivier Letessier, President of Air Liquide Far Eastern Taiwan gave a presentation titled “Scaling up: From industrial to smarter hydrogen in Taiwan”. He began by saying that drove a hydrogen car for five years when he lived in France.

The company has 450 researchers working on biogas, and space exploration, among others. The company has committed to carbon neutrality by 2050 and has a clear path to reach this goal. It will do this by capturing CO2, using biogas as a feedstock, and developing electrolysis to produce green hydrogen. It is also improving efficiency by upgrading production facilities and operations and increasing the use of renewable energy. At the recent Tokyo Olympics, hydrogen was used for the Olympic flame and hydrogen buses were used to transport athletes. He cited an estimate that 18% of final energy demand could be met by hydrogen. Of this 30% could be for transport. Hydrogen can also be used in industry, such as producing steel. There is great potential for large vehicles including trucks, ships, and planes.

In Taiwan Air Liquide has plans for five electrolyser plants and working on a carbon capture technology for another plant in Taoyuan. 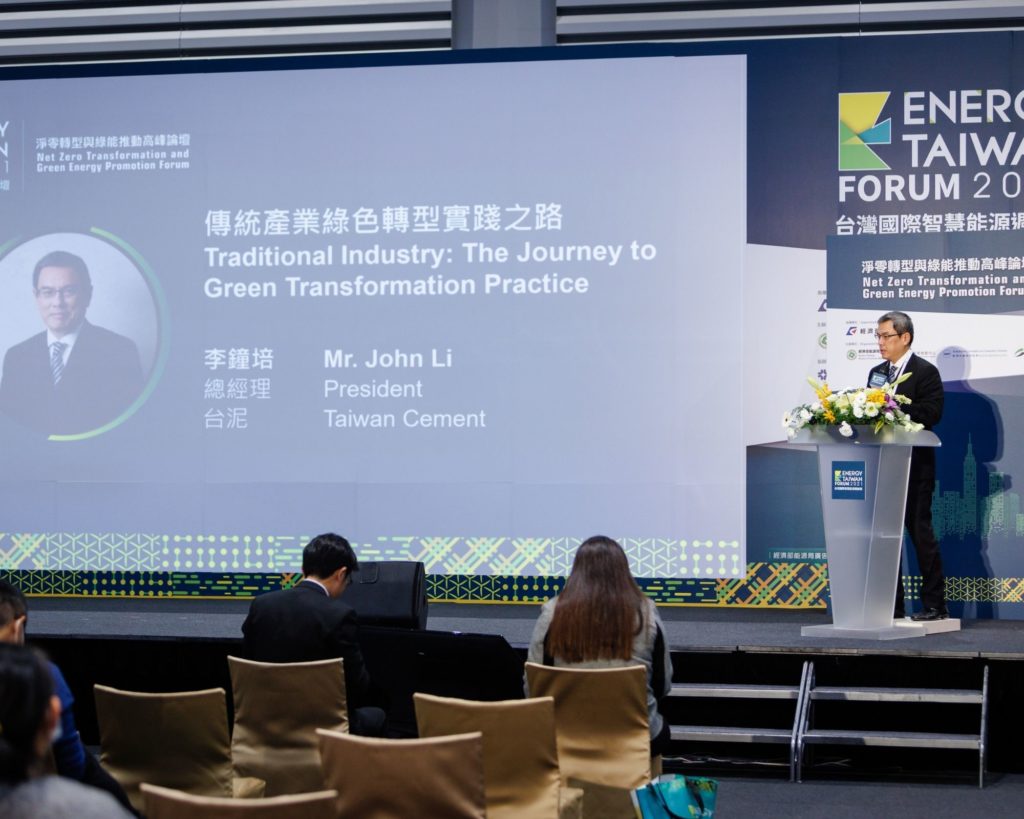 John Li, President of Taiwan Cement, gave a presentation on the topic “Traditional industry: The journey to green transformation practice”. He acknowledged that reducing the footprint of the cement industry is not easy and will require considerable efforts. It is also not easy to replace steel and cement with other materials. Switching to biomass and green energy is one solution. One of Taiwan Cement’s plants will get power from a geothermal source starting from next year. He went on to introduce some of the company’s new factories, which have fewer emissions than previous generations.

Afternoon session 2: New fashion of green living - To an eco-friendly and sustainable future 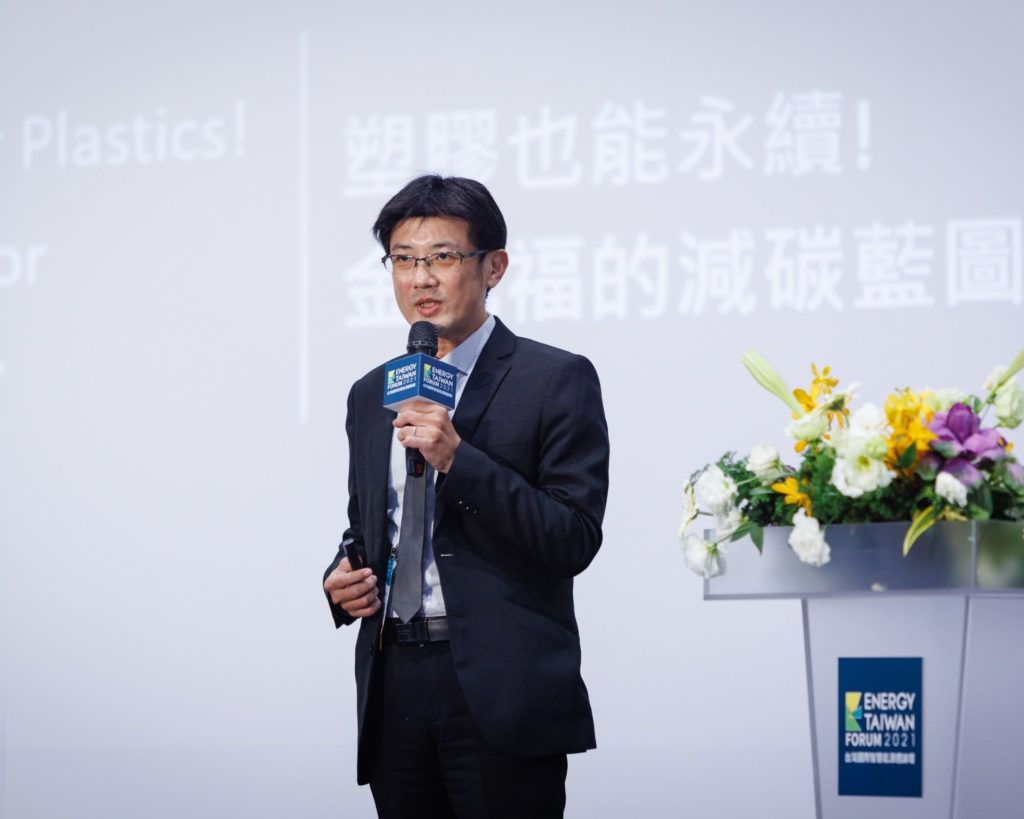 -
Benjamin Kuo, Vice President of King Yuan Fu, spoke about the sustainability of plastics and his company’s blueprint for carbon emission reductions. The company’s main business in producing plastic containers, which has seen expanding demand during the coronavirus pandemic. He reported that 20% of the company’s raw materials now come from recycled materials and the company has a target to increase this to 40% by 2025. The company has a recycling and processing factory in Mexico to reuse materials and close the production loop. According to the speaker, containers made from recycled materials are 30-40% more expensive than those made from virgin materials. It also plans to get 100% of energy from renewable sources by 2050. 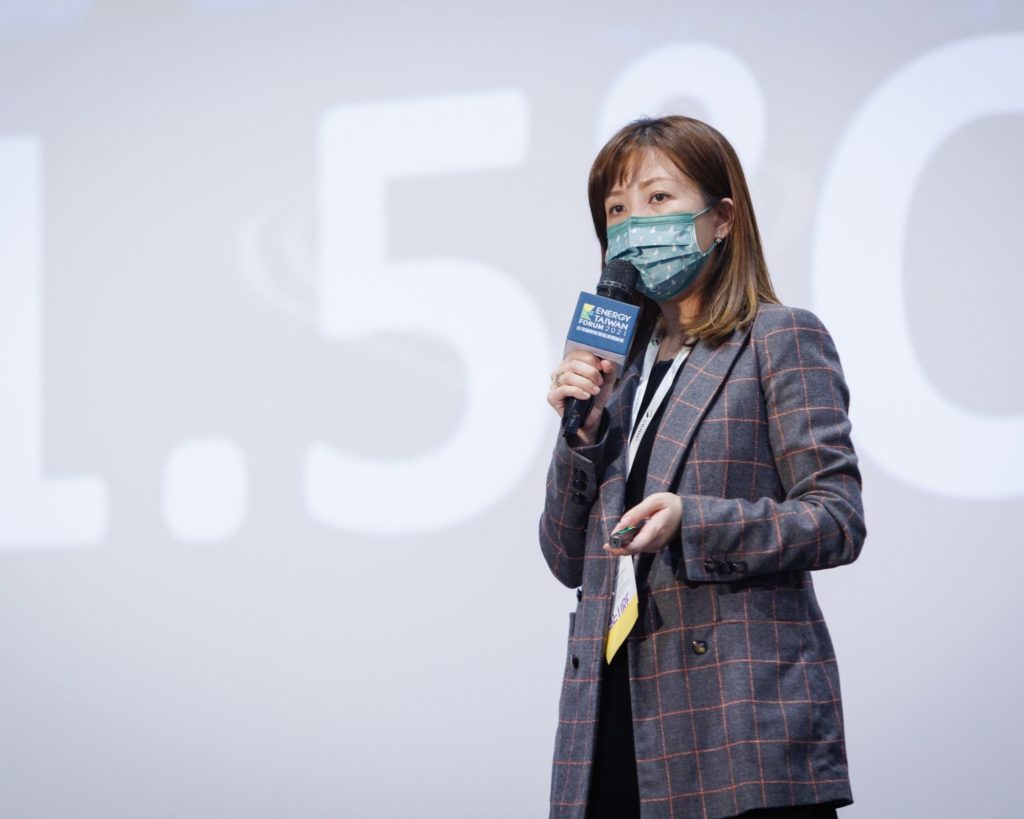 The company’s first goal is to reduce emissions in the supply chain and switch to renewable energy. Next is to decouple carbon emissions from business growth. She reported that the highest portion of emissions come from products it produces, such as wood and plastics. Besides cutting down the use of resources, the company is using recycled materials. It is also experimenting with new business models such as leasing furniture. For example, it is leasing furniture as a service to Taipei 101. At the end its useful life, the furniture is recycled. In the future, stores will have a circular hub and provide maintenance services to prolong the life of furniture. Services have already begun in certain countries to allow customers to sell back products to IKEA which it refurbishes and resells. IKEA employee uniforms are made from recycled curtains made by underprivileged children, thereby using resources while also supporting the children. IKEA aims to get 100% of energy from renewables eventually.

IKEA is also developing plant-based foods to replace meat products. In the future, at least 50% of food sold in IKEA stores will be plant-based, according to Wang. The company also plans to use EVs for last mile delivery, but this will require more infrastructure. 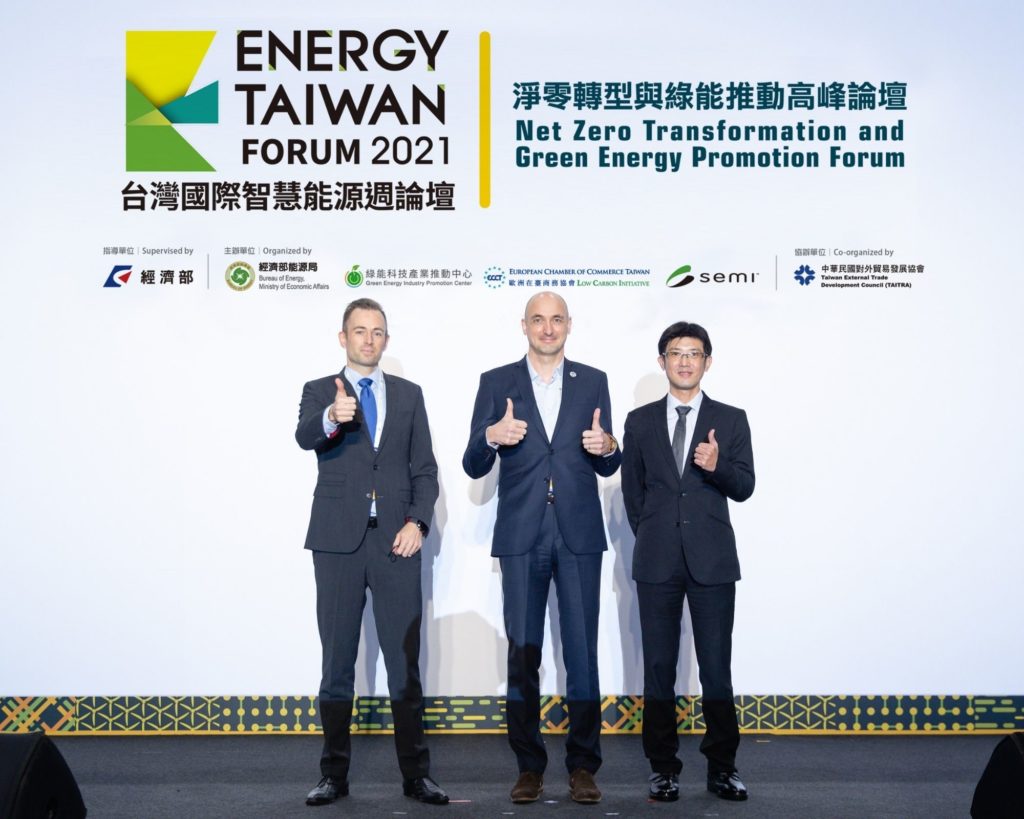 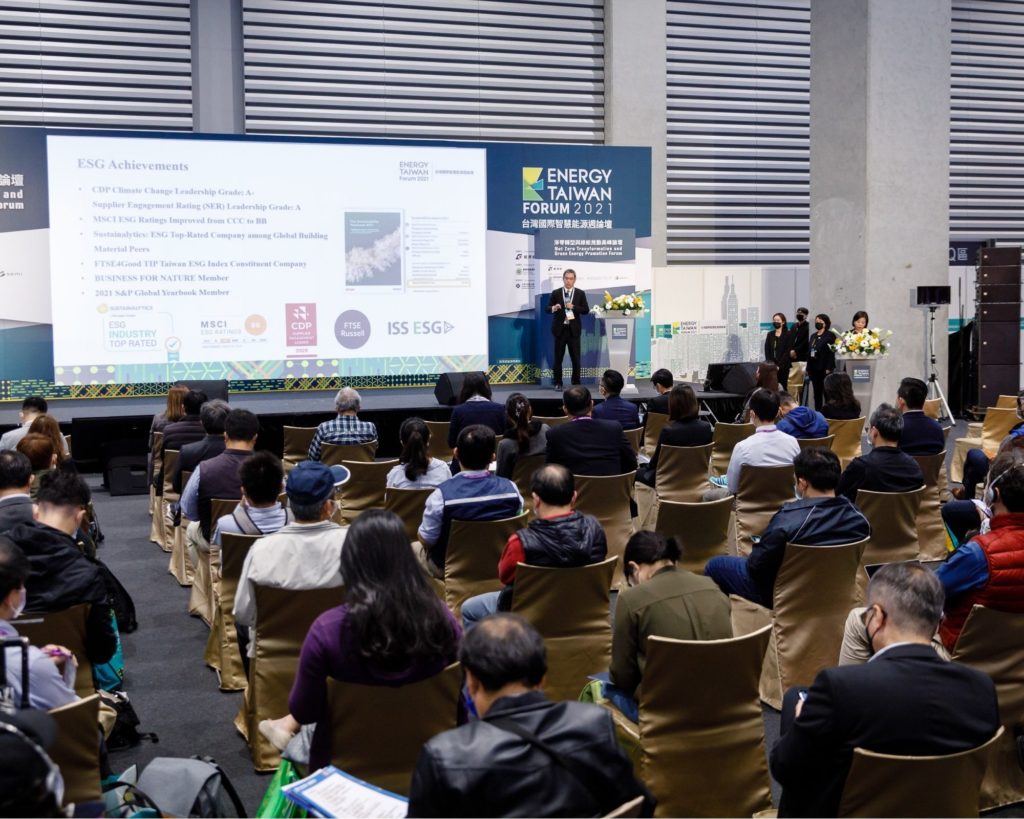