The LCI members and partners introduce the upcoming collaboration projects with LCI. 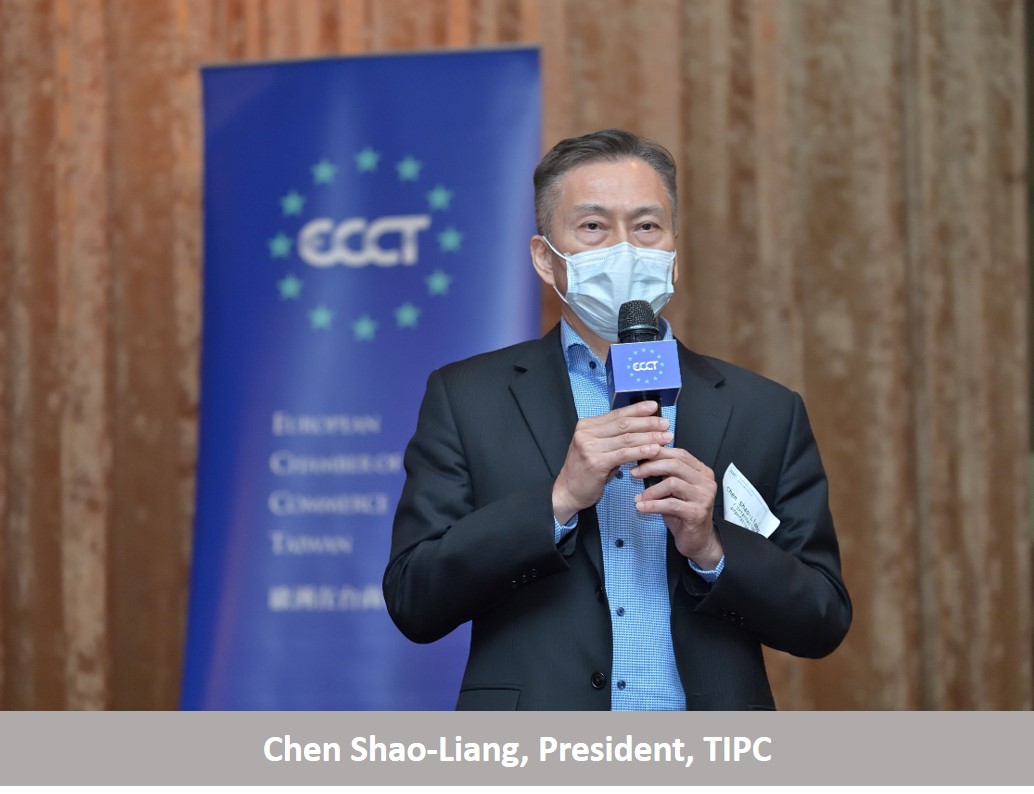 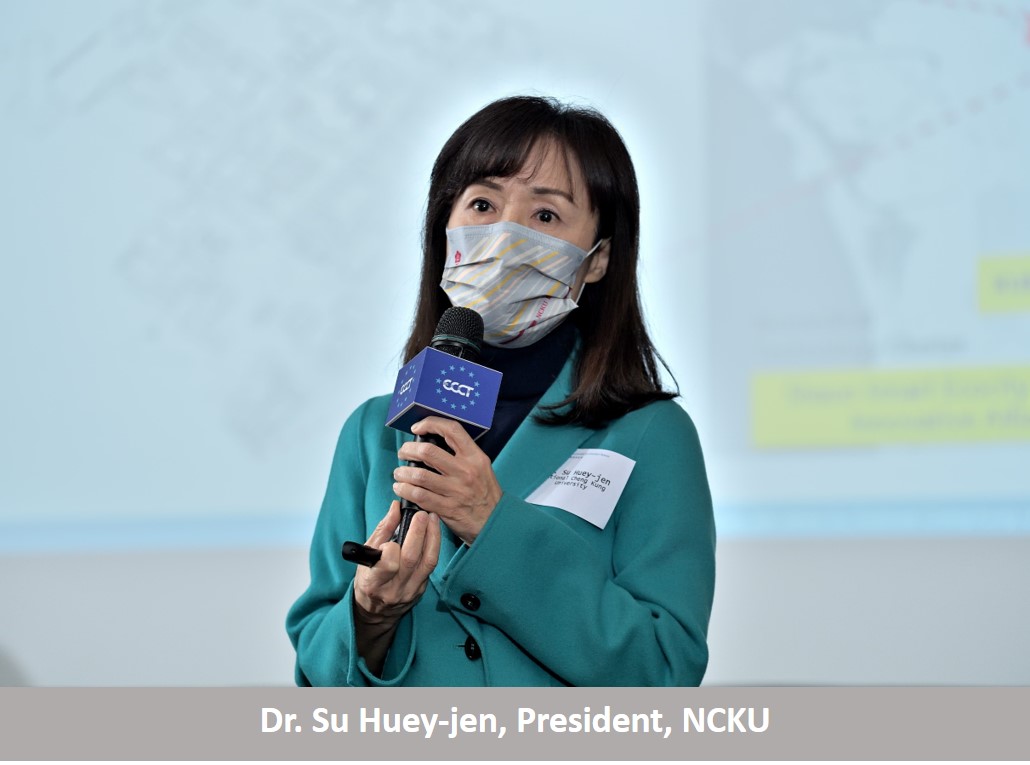 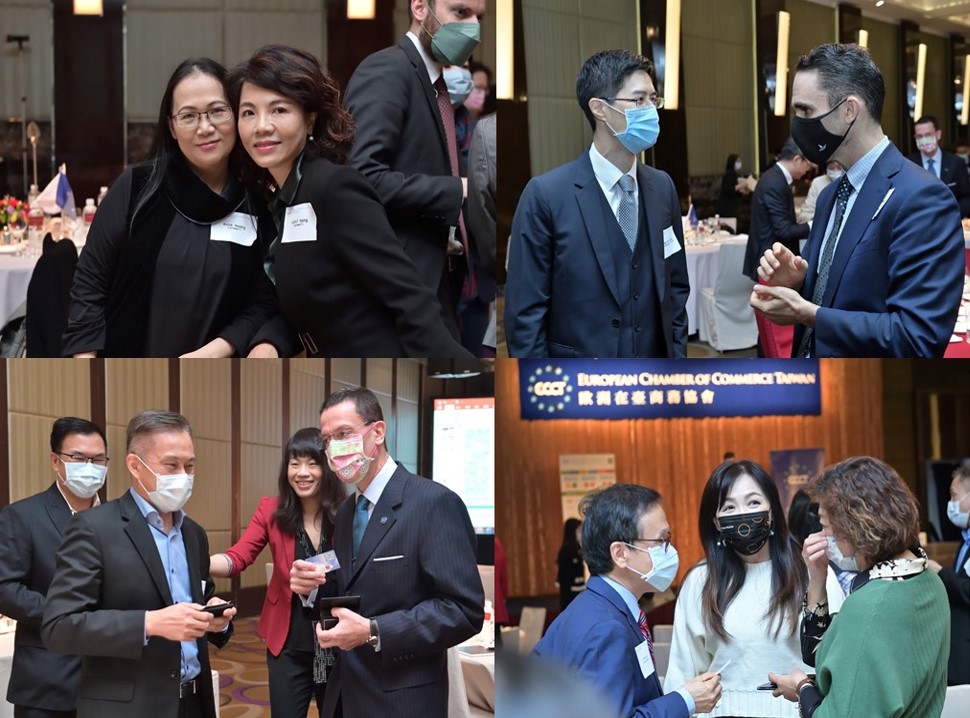 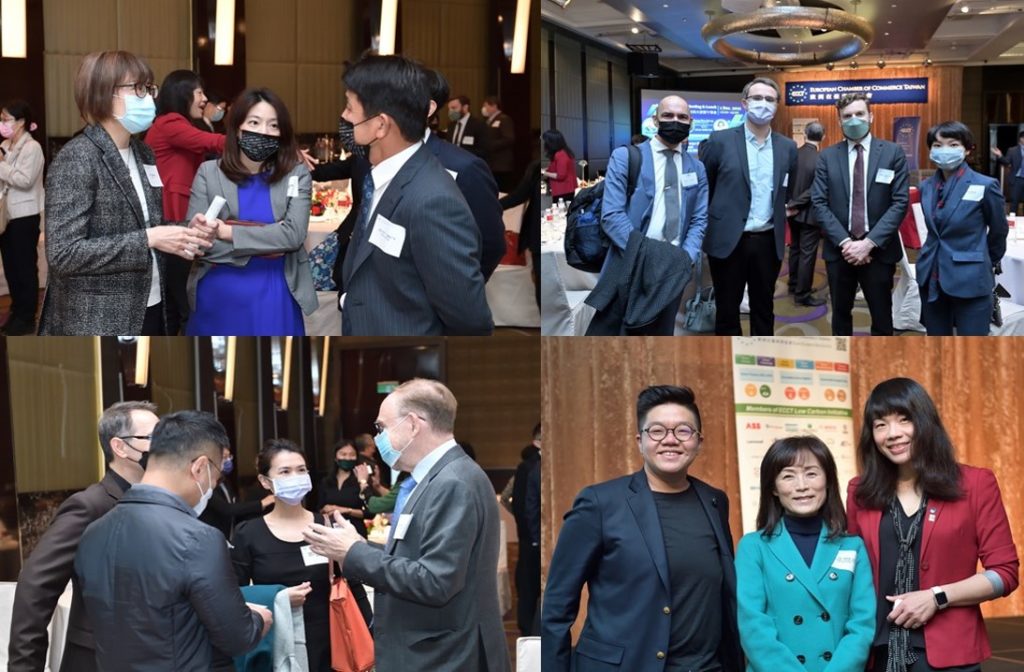 In his presentation, Tsai Chi-Chang explained what the LY is doing to meet SDGs. The SDGs Advisory Council is a bipartisan body that was established in the LY to work with government agencies as well as the private sector and NGOs to promote progress towards meeting SDGs.
- 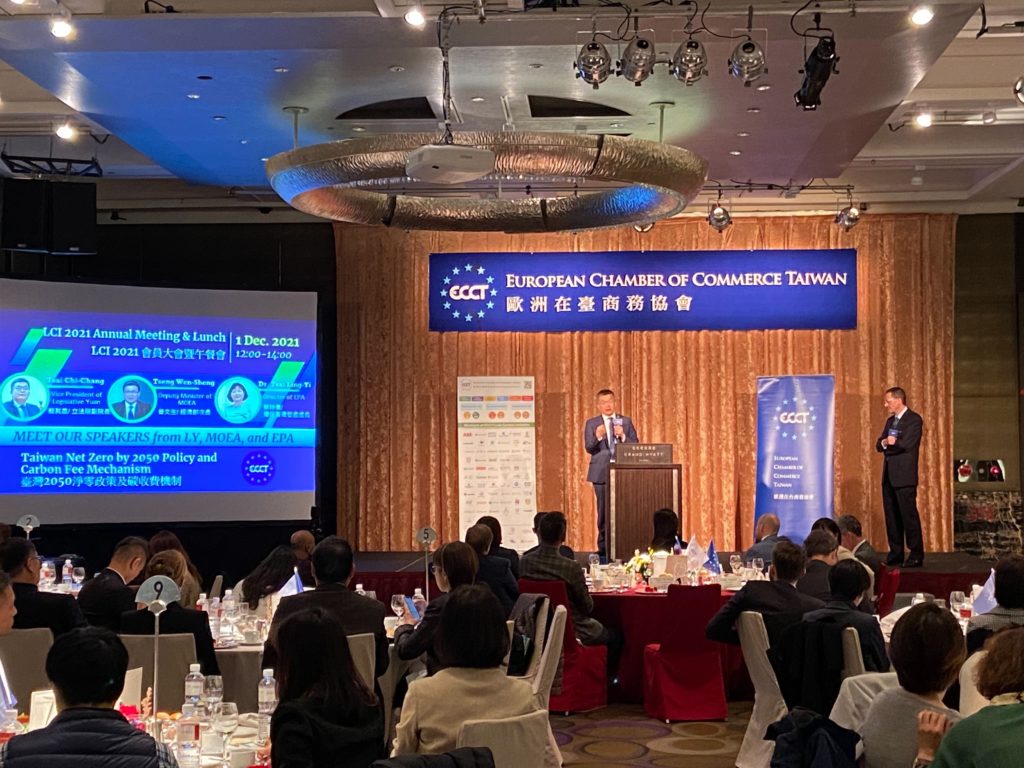 Tsai Chi-chang, Vice President of the Legislative Yuan, who is also Chairman of the LY’s SDGs Advisory Council (立法院副院長暨永續發展目標策進會會長 蔡其昌) presenting his slides
-

Tsai noted that every ministry and agency has drawn up SDG action plans. For example, the Financial Supervisory Commission (FSC) has plans to promote green finance and is drawing up Environmental Social and Governance (ESG) rules and regulations. The Ministry of Transportation and Communications (MOTC) has plans to reduce emissions in transport, including subsidies for electric buses. The Ministry of Education (MOE) is running educational campaigns in schools to educate students about SDGs, recycling and the circular economy. The Council of Agriculture (COA) is working to reduce the carbon footprint of agriculture by shortening the distance from farm to fork and promoting the consumption of local, in-season produce. The Ocean Affairs Council (OAC) is focused on cleaning up the oceans surrounding Taiwan and making fishing more sustainable. 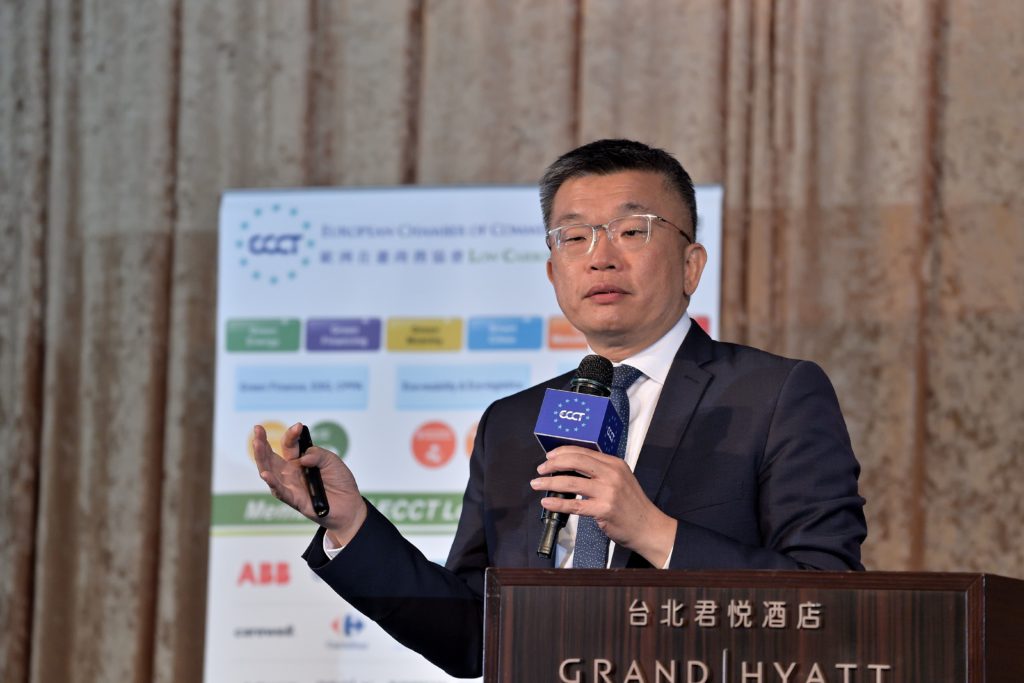 Tsai Chi-chang, Vice President of the Legislative Yuan, who is also Chairman of the LY’s SDGs Advisory Council (立法院副院長暨永續發展目標策進會會長 蔡其昌) is sharing how Legislative Yuan accelerate SDGs and Net Zero by 2050 in Taiwan
-

The LY, together with other agencies and NGOs is arranging a series of SDG action days. The first one, to be held in Taipei from 4-5 December will feature a number of fun and interactive activities for families to educate them about environmental and sustainability issues. It is planned to hold similar events all across Taiwan next year. 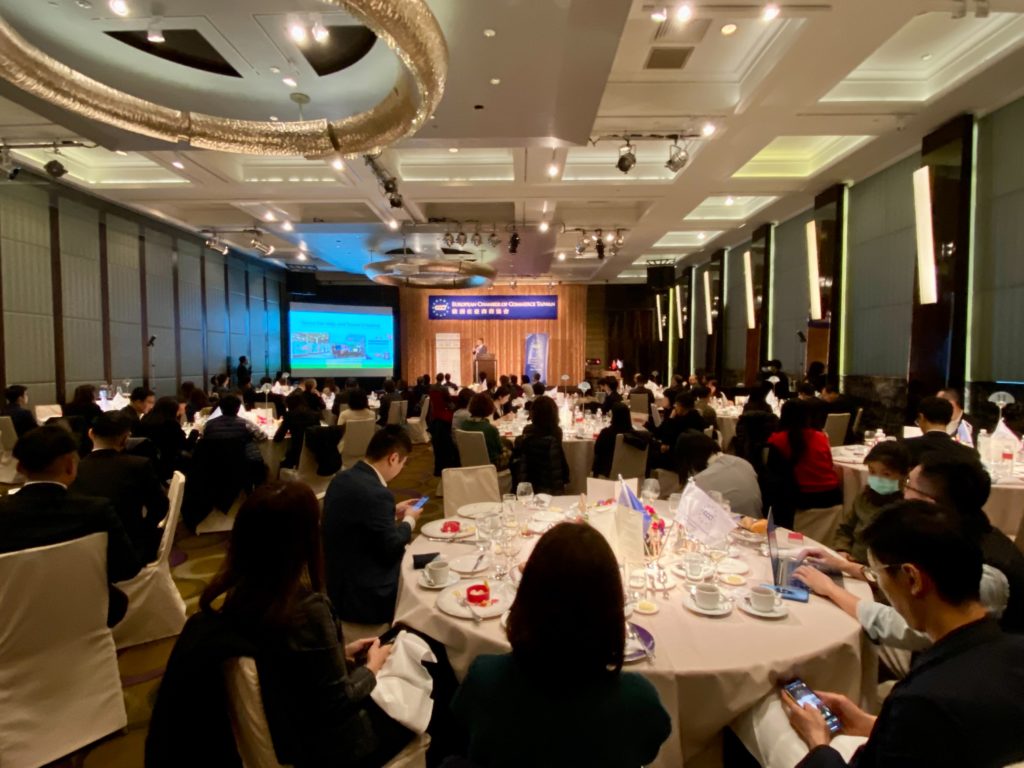 In his recorded presentation, Deputy Minister Tseng Wen-sheng outlined the various actions that Taiwan will be taking to reach net zero, especially the phasing out of coal-fired power in favor of natural gas and renewables. He said that by 2023, the share of renewable power would surpass that of nuclear energy, which, at the same time, would reduce the use of coal. In addition to increasing efficiency in the use of energy in both electricity generation and industry, Taiwan is also exploring other options to reduce emissions, such as carbon capture and storage and promoting circular economy business models. In addition to wind and solar, Taiwan also plans to make greater use of other renewable sources, such as geothermal and ocean (wave) energy as well as using renewable energy to produce green hydrogen.
-

Tseng noted that reducing the use of fossil fuels would also have an economic benefit because purchasing and importing fossil fuels from abroad currently costs the equivalent of 10% of Taiwan’s GDP.

All industry sectors will be required to reduce their respective carbon footprints, including IT, cement, steel, textile, paper, and chemical producers. Tseng said that large conglomerates Formosa and CPC were taking the lead by announcing their carbon reduction roadmaps.

In her presentation, Dr. Tsai Lin-yi gave an overview of the carbon pricing framework under the pending Climate Change Response Act. She noted that Taiwan’s current CO2 emissions in 2019 were 265.6 million metric tonnes of carbon dioxide equivalent (MtCO2e), accounting for 0.56% of global greenhouse gas (GHG) emissions, placing Taiwan 31st place among countries globally, although, with per person emissions of 10.96 tonnes of CO2 equivalent, Taiwan is in 19th place globally. Tsai noted that most of Taiwan’s emissions are CO2 since methane only accounts for about 2% of Taiwan’s GHG emissions.
- 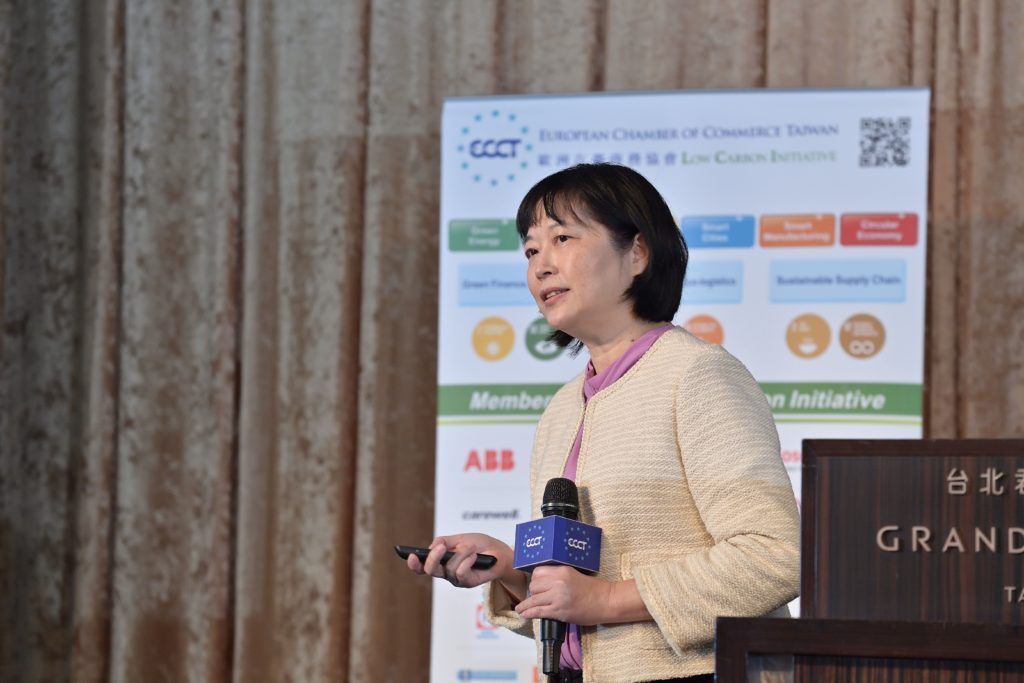 According to statistics cited by Tsai, Taiwan’s GHG emissions reached a peak in 2007 at 280 MtCO2e and have been in a downward trend in recent years. Moreover, Taiwan has managed to maintain economic growth (up 64% since 2005) while reducing GHG emission intensity (CO2e/GDP) by 40%.

Taiwan’s pending Climate Change Response Act (currently in the comment and notice period) will make reaching net zero a legal requirement. It will increase emissions reduction targets that were written into the previous Greenhouse Gas Reduction and Management Act.
- 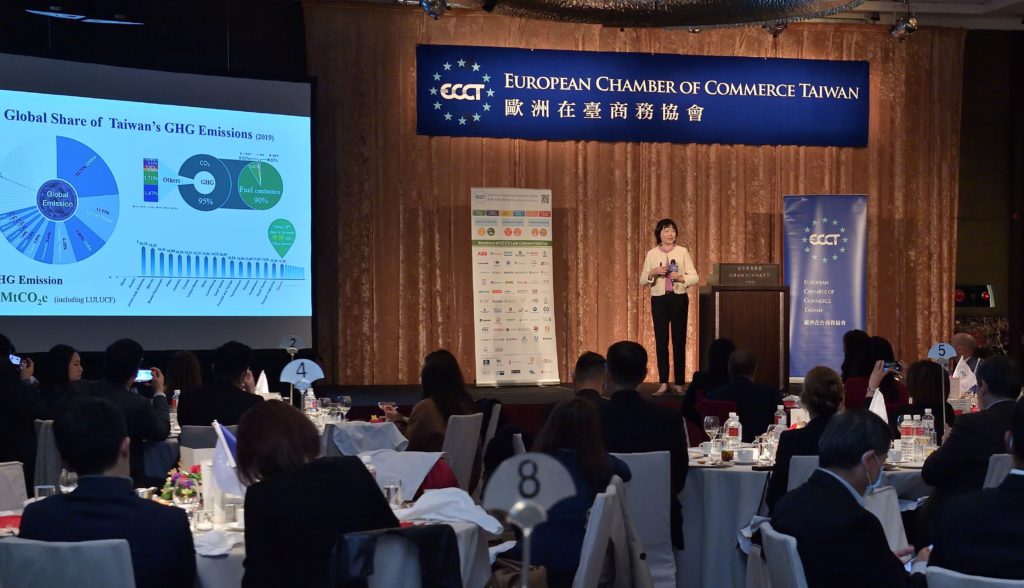 -
In terms of corporate governance, the act will enhance the level of climate governance by urging local governments to establish climate committees and emphasize information transparency and public participation. In terms of emissions control and incentive mechanisms, performance standards for manufacturing, transportation and construction sectors will be set and there will be incentives for voluntary reductions by the private and public sector.

The act will also set carbon levies for domestic emission sources, to be implemented in stages. Tsai noted that 287 of Taiwan’s largest emitters had reported GHG emissions amounting to 227 MtCO2e and covering 80% of Taiwan’s total emissions.

When designing Taiwan’s carbon pricing mechanism, authorities looked at several international examples. The planning of Taiwan’s carbon levy will be implemented in phases, based on GHG emissions from direct and indirect emissions sources (for example, large electricity users will pay more based on the carbon produced by burning fossil fuels to generate power), with differential rates depending on usage. Revenue from the carbon levy will be earmarked to fund climate and energy programmes. Users that make improvements and reduce their emissions will earn credits, which they will be able to trade.
- 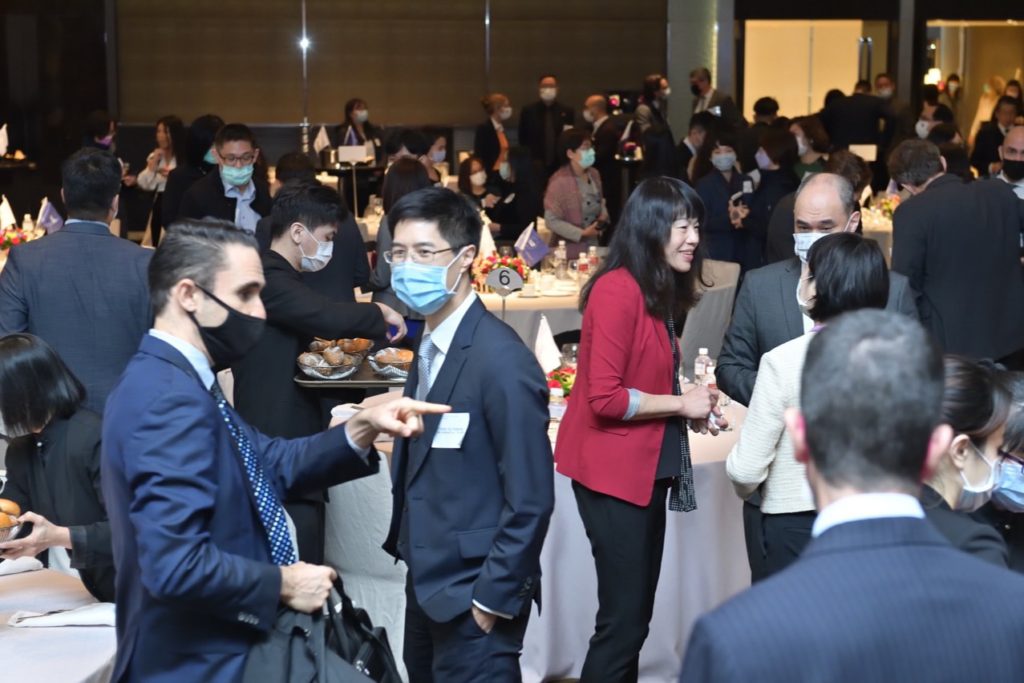