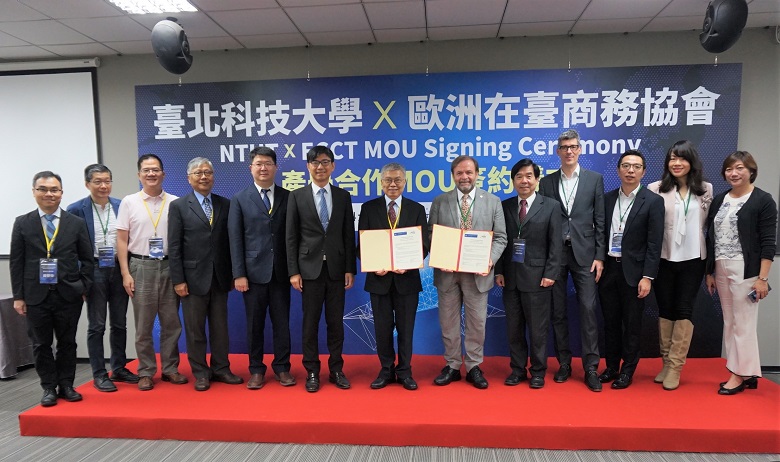 The ECCT today signed a Memorandum of Understanding (MoU) with National Taipei University of Technology (NTUT) to promote cooperation between the chamber and the university and provide internships for students and employment for graduates. At a ceremony held today, the MoU was signed by ECCT Chairman Giuseppe Izzo and Dr Wang Sea-fue, President of NTUT. 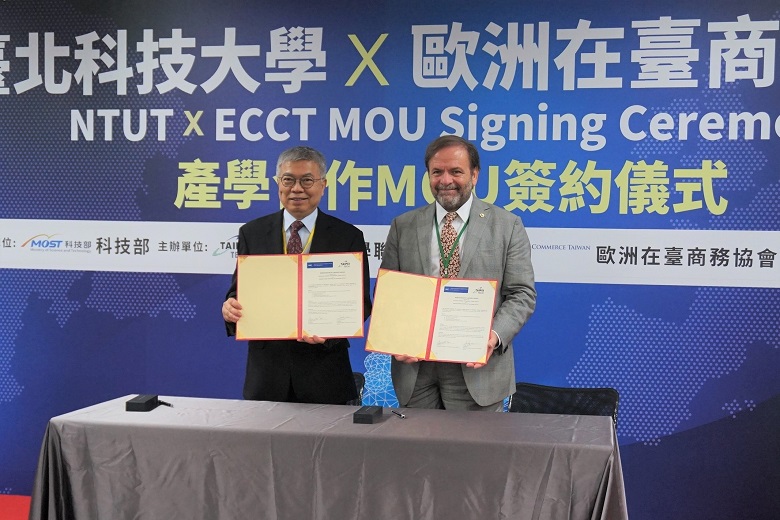 At the signing ceremony, opening remarks were made by Chairman Izzo, President Wang Sea-fue and Dr Chiou Chyou-hueh, Director-General of the Department of Academia-Industry Collaboration and Science Park Affairs, under the Ministry of Science and Technology. In addition, introductory presentations were given by Chairman Izzo about the ECCT and by Dr Huang Sheng-tung, Dean of the Office of Industry-Academia Cooperation, about NTUT. The ceremony was also attended by Lee Chia-hwa, CEO of NTUT's Office of Industry-Academia Cooperation and members of the ECCT's Low Carbon Initiative (LCI) Steering Committee, John Pien and Eric Yu.

Wang concluded his remarks by saying that NTUT is joining the ECCT and the LCI. Given Europe's extensive experience in offshore wind power and low-carbon activities, he said that he looks forward to discussing and sharing regularly with other ECCT members in the green energy sector to further strengthen NTUT's green energy capabilities. He added that NTUT will participate in the ECCT's forthcoming Global Offshore Wind Summit, scheduled for October. 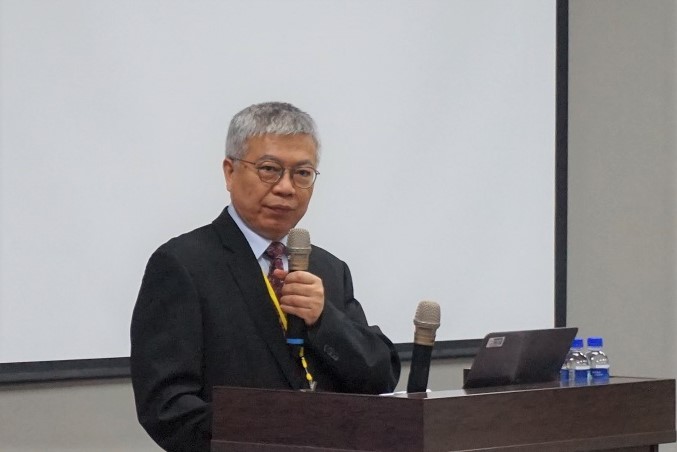 In his opening remarks Chairman Izzo said that he looked forward to greater cooperation with NTUT given its status as one of the most prominent universities in Taiwan, working on relevant areas of technology research and because ECCT member companies are always looking for new talent. By cooperating with NTUT he hoped to benefit both from information and research exchanges and by finding and recruiting talented individuals after they graduate from NTUT. In doing so, he said that we will all benefit and advance important areas of research, including renewable energy, energy conservation, intelligent health, smart manufacturing, AIOT, smart transportation and the circular economy. Therefore, he said that the ECCT sees this cooperation as a win-win for ECCT members, for NTUT and for NTUT students. 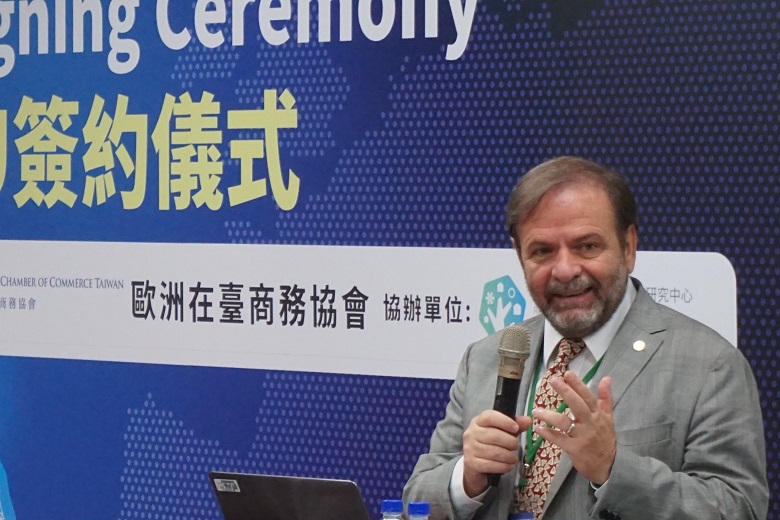 Chairman Giuseppe Izzo, is giving his opening remarks and looking forward to further collaboration among NTUT and its members

In his remarks Director-General Chiou Chyou-hueh noted that the MOST subsidises cooperation between industry and academia and is closely involved with universities like NTUT. He said that the MOST welcomed the ECCT-NTUT MoU as a good opportunity for NTUT and ECCT members to jointly develop technology and business applications and said he hoped that many European companies would take advantage of this opportunity. 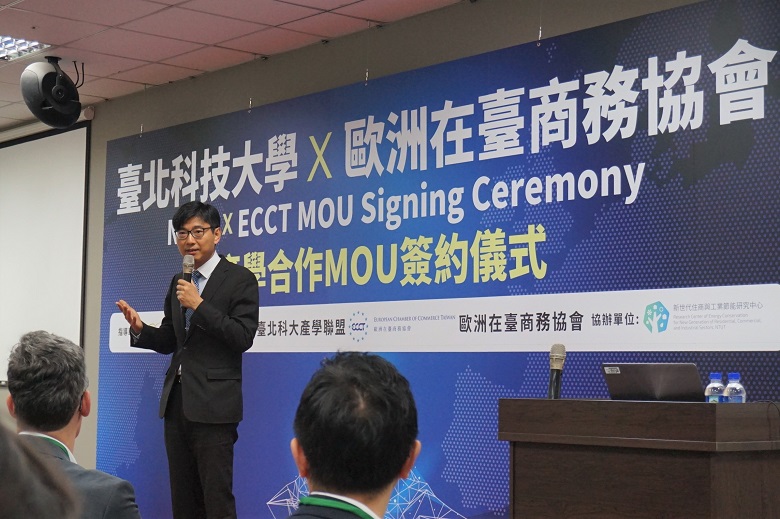 Director-General Chiou Chyou-hueh, the Department of Academia-Industry Collaboration and Science Park Affairs of MOST, is welcoming the ECCT to develop the partnership with NTUT

After the opening remarks, Dr Huang Sheng-tung gave an introduction to NTUT. He pointed out that NTUT has many distinguished alumni, including 10% of CEOs of companies listed on the Taiwan Stock Exchange as well as senior government officials, among them, the current minister of the Ministry of Economic Affairs, Shen Jong-chin. He went on to introduce the university's various departments and areas of research, which cover multiple engineering and technology fields.

He noted that the university is conducting research on energy saving, materials and green energy, among many others. Of interest to members in offshore wind, the university recently set up an interdisciplinary offshore wind research centre which covers all the relevant areas including civil, mechanical and electrical engineering. The purpose of the centre is to conduct research and train engineers for the burgeoning wind energy sector as well as develop standard industry specifications adapted to local conditions. The centre is funded by the MOEA and 17 industry associations. 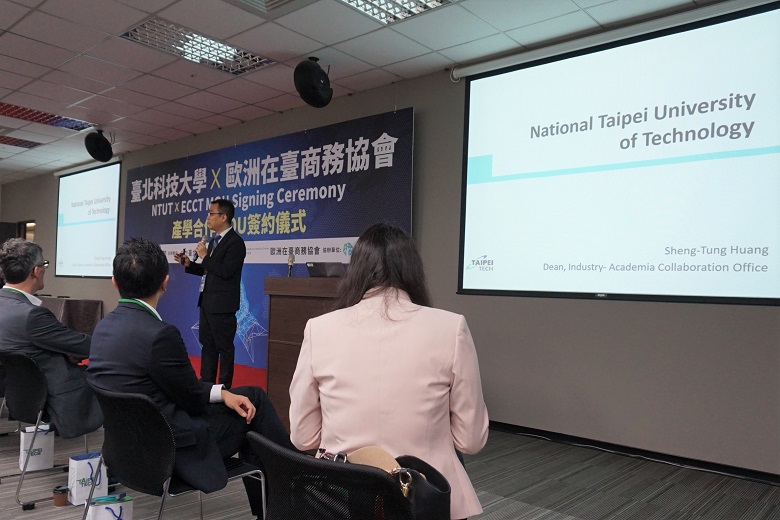 Dr Huang Sheng-tung, Dean of the Office of Industry-Academia Cooperation, is giving an introduction of NTUT