-
The ECCT co-hosted the Tainan-ECCT-NCKU Low Carbon City Conference with the theme Public Private & Academic Partnership (PPAP) for a sustainable future. The half-day event was organised by the ECCT’s Low Carbon Initiative (LCI) in conjunction with National Cheng Kung University (國立成功大學) and co-organised by the Tainan City Government and the Shalun Industry Alliance (SIA, 沙崙智慧產業聯盟). At the event, opening remarks were made by Tainan Mayor Huang Wei-Che (台南市市長 黃偉哲), Dr Jenny Su (Huey-Jen), President of NCKU (成功大學校長及沙崙聯盟召集人蘇慧貞), and ECCT Vice Chairman Giuseppe Izzo. This was followed by an introductory presentation of the ECCT by ECCT CEO Freddie Höglund and an MOU signing ceremony between the ECCT, NCKU and SIA to foster cooperation on smart eco-city development and new low carbon science and technology. The programme included presentations from speakers from NCKU and representatives from industry to talk about increasing energy efficiency and sustainability in semiconductor manufacturing, green hydrogen, healthcare, the NCKU’s innovative new carbon negative factory and developing talent necessary to enable sustainable development. 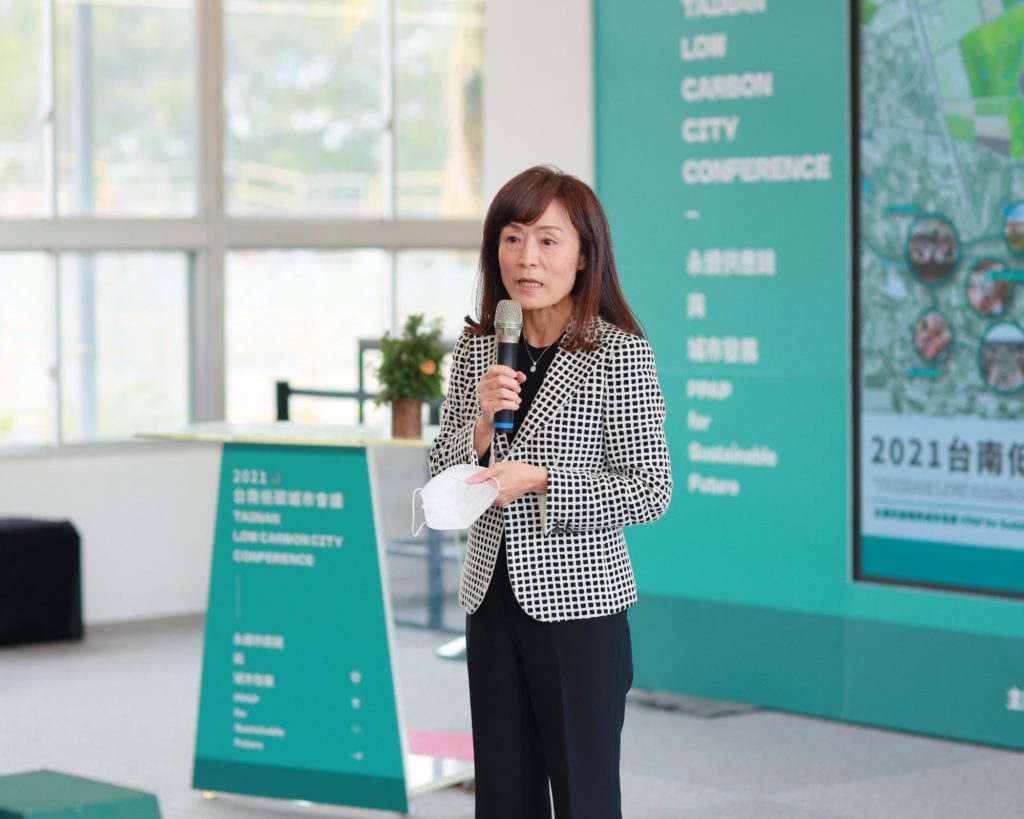 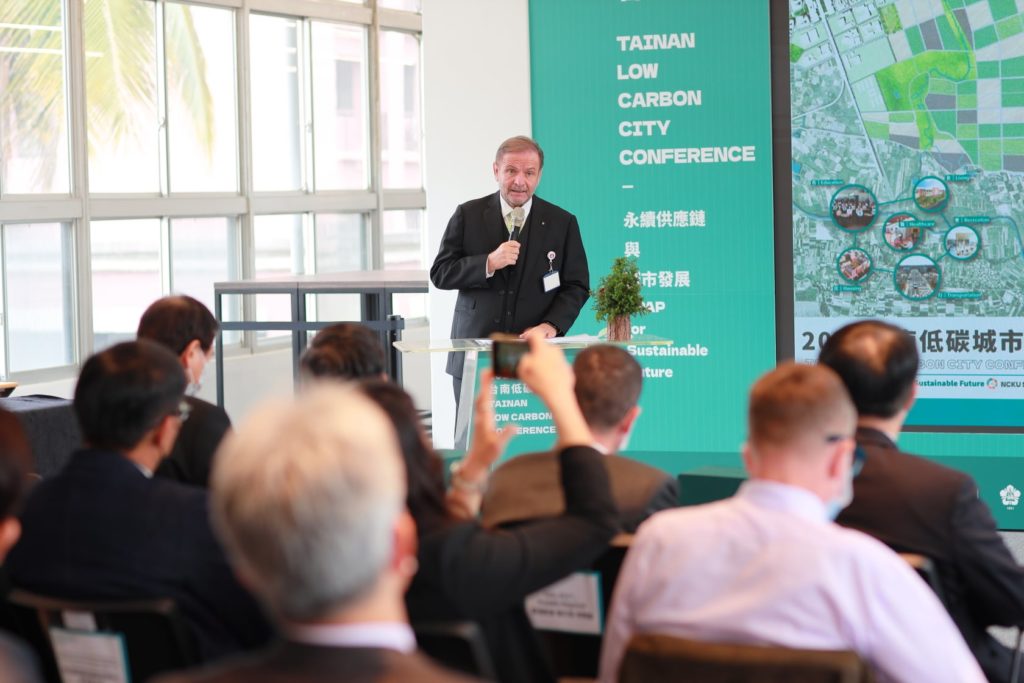 In his remarks, Mayor Huang spoke about how Tainan is supporting the transition to net zero. In her remarks NCKU President Jenny Su said that since its inception, NCKU has aimed to deliver best practices for education and industry and future development. She introduced some of the buildings on NCKU’s campus and spoke about how the university is working to reduce its own greenhouse gas emissions and meeting the UN’s Sustainable Development Goals (SDGs). She said that the university has reoriented its development plans in line with the SDGs as well as conducted a full review of curriculums, including learning outcomes, the processes behind them, and efforts to better align teaching with SDG goals so that students and graduates can better engage in global SDG efforts in the future.

She went on to introduce plans by NCKU to build a hospital to support biomedical industry eco-system development and the first academy for advanced semiconductors. She added that the university aims to provide all the necessary talent to meet business needs. NCKU will also establish an international School for Sustainability, which will focus on education and cultivation in collaboration with European governments. 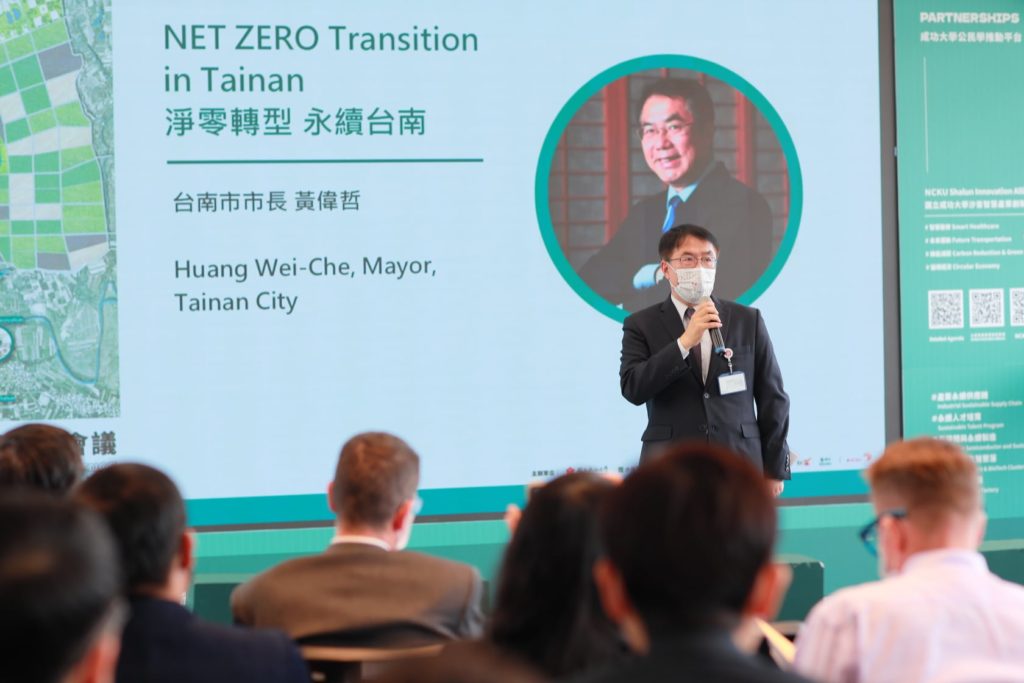 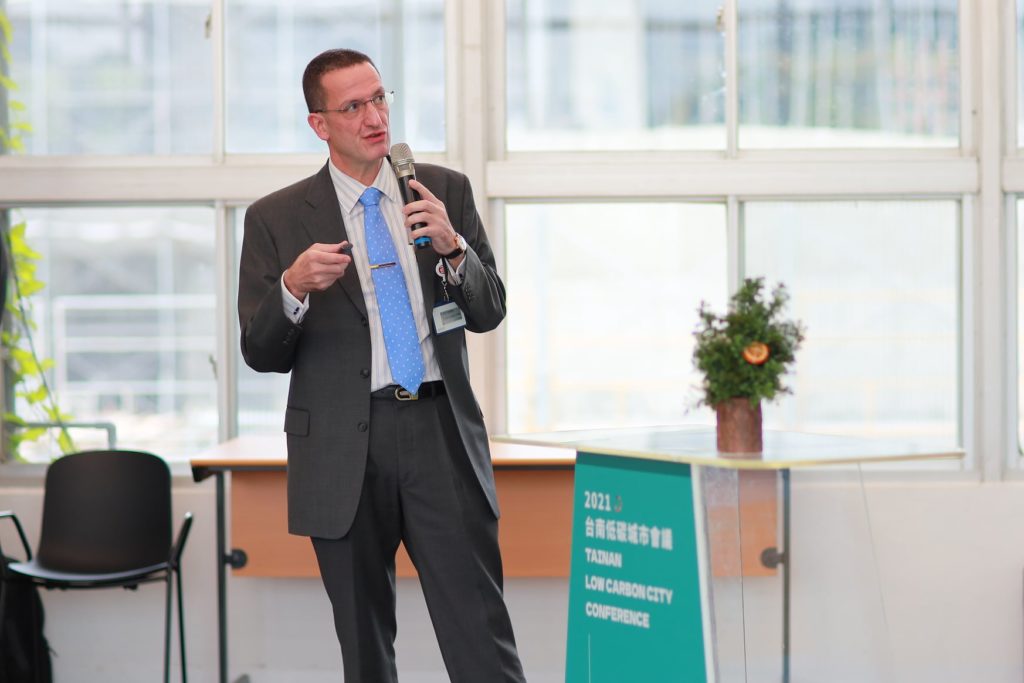 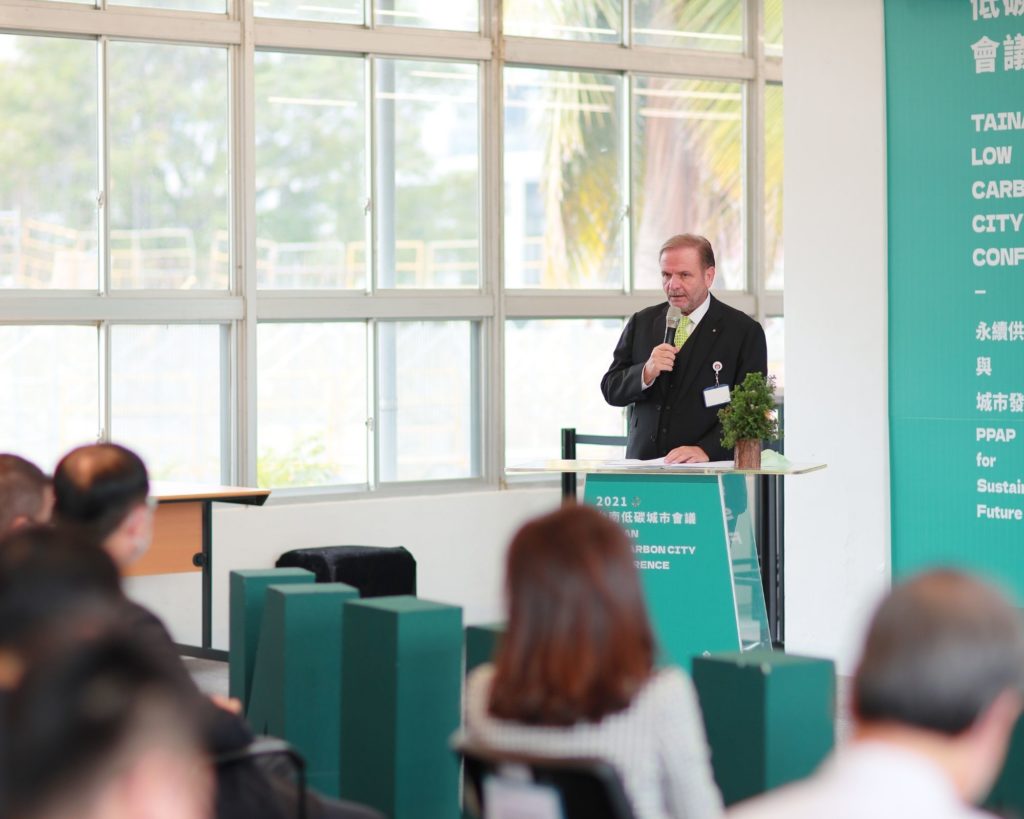 Giuseppe Izzo, in his capacity as Managing Director, Taiwan & Vice President of the Asia Pacific Region for STMicroelectronics, gave a presentation on the topic of a sustainable future for the semiconductor industry. He began with an introduction to his company globally.

He noted that ST has a long-standing commitment to sustainability and recently committed to become carbon neutral by 2027. The company is accelerating the transition to clean, safe, and smarter systems, including mobility as well as improving the circularity of its products by reducing the use of energy, resources, and water. In terms of smart mobility, the company’s products are helping car manufacturers to make driving safer, greener, and more connected. In terms of power and energy, it is helping companies increase energy efficiency. In IOT and 5G, it is supporting the proliferation of smart and connected devices with products, solutions, and ecosystems. The company is also supporting SDGs and adopted advanced reporting standards. He noted that there are three main areas in the production and distribution of semiconductors that need to be addressed: the use of resources, the use of electricity and the use of water. The company has already reduced its energy consumption through energy saving measures, increased the use of renewable energy and reduced the use of water by 72%. It strives towards circularity and to produce zero waste for landfills and to reduce the consumption of chemicals and eliminate the use of hazardous materials. In his presentation Dr Chen Chuh-Yung, Distinguished Professor in NCKU’s Department of Chemical Engineering (成大化學工程學系特聘教授 陳志勇) spoke about how NCKU is contributing to talent development to enable the future sustainable development of industry. This includes courses covering semiconductors, smart manufacturing, the circular economy, and sustainable energy in order to tackle climate change as well as future industries, such as an AI course that covers big data analysis and cloud computing.

In his presentation, Dr Chen Chuh-Yung, Distinguished Professor from NCKU’s Department of Chemical Engineering, gave an introduction to NCKU’s first carbon negative pilot factory. To get to carbon neutrality will need energy saving and carbon reduction, energy efficiency (in power generation and the industrial sector), an acceleration of the proportion of renewable energy, energy storage technology as well as industry-oriented negative carbon emission technology, including carbon capture and reuse and the implementation of circular economy models as well as natural photosynthesis. 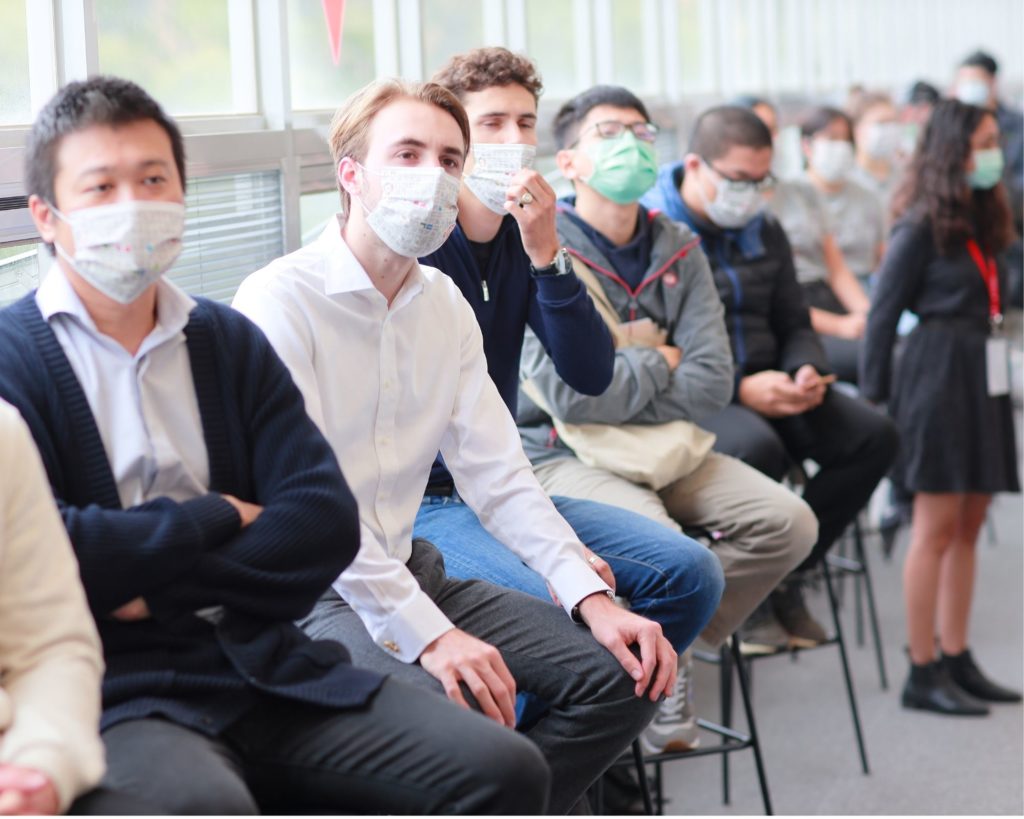 NCKU’s pilot factory was developed using key technologies and market applications developed by NCKU. The factory is able to capture and purify carbon dioxide into a resource for petrochemical materials. It is divided into two sections: CO2 capture and purification and purified CO2 alkylation for reuse. The factory can transform carbon pollutants, carbon dioxide, and carbon monoxide into ethane, propane, methane, urea, and fixed-carbon products. The plant has a capture rate of 90% of CO2 or 60 kilograms per day and an alkane conversion rate of 95%. Since carbon capture and reuse is recognised by the IEA as one of the solutions to reach net zero by 2050, NCKU’s demonstration project shows the potential of this technology.

The speaker went on to talk about how renewable wind energy generated on the island of Penghu and elsewhere in Taiwan could be used to produce green hydrogen. 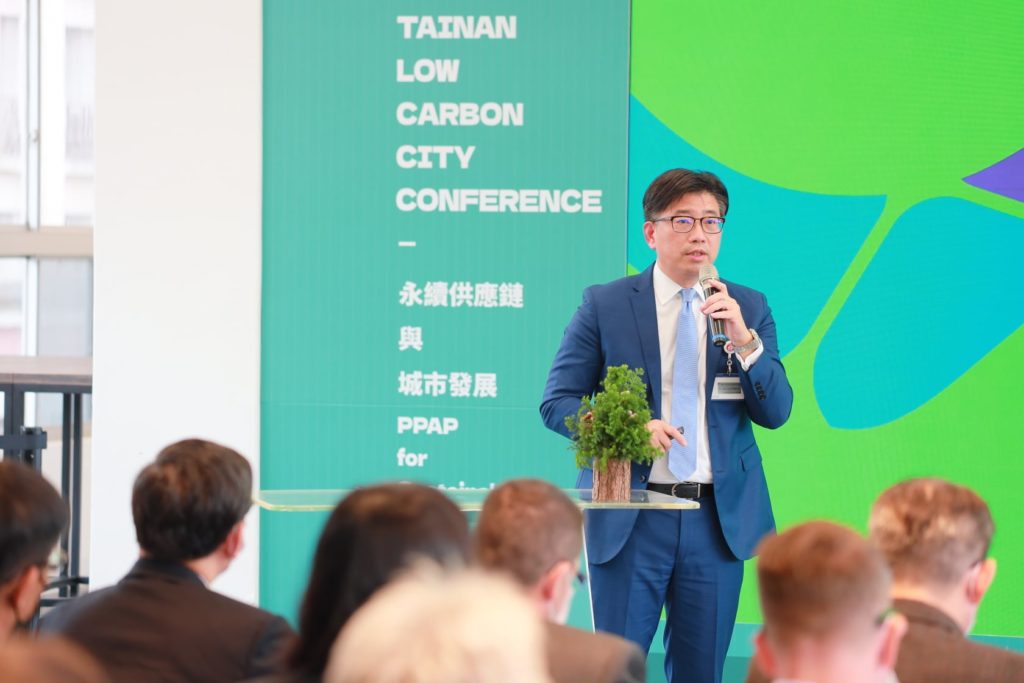 In his presentation, Dr John Lee, Managing Director of the Merck Group in Taiwan spoke on the topic “Curious minds dedicated to sustainability”. He began by introducing the company’s business with a focus on electronics aligned with the Merck Group’s main areas of healthcare (digital healthcare and precision medicine), life science (commercial labs and future food), and electronics (autonomous driving, IOT, 5G, IOT and novel computing). 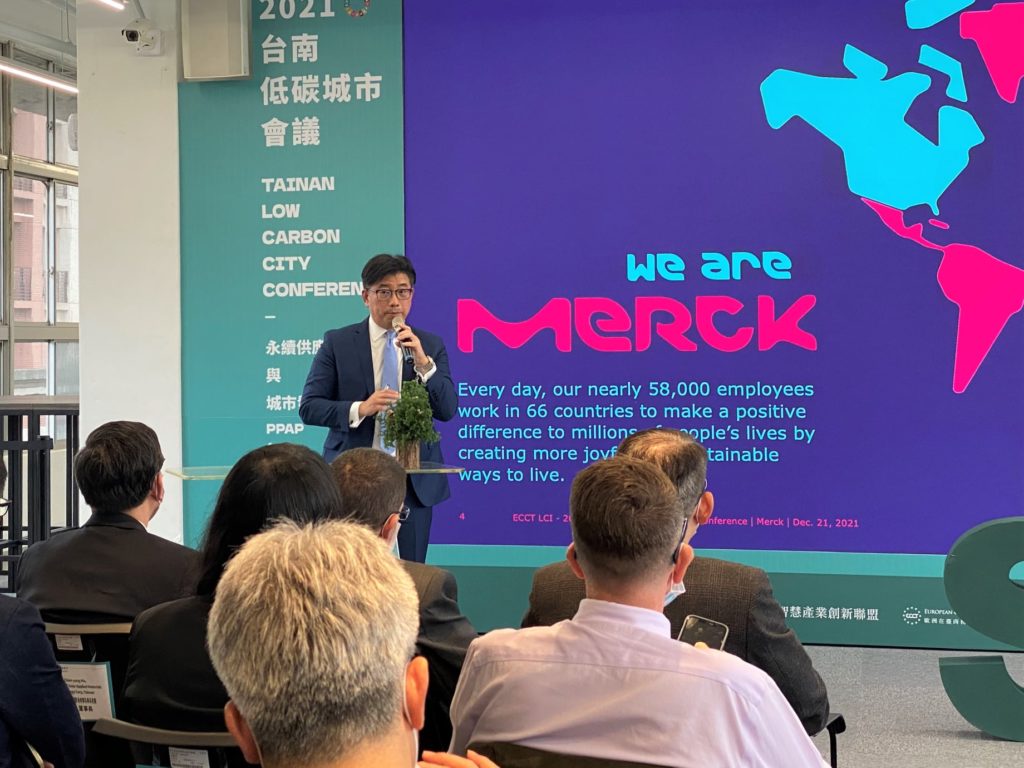 -
In terms of its sustainability goals, Merck aims to integrate sustainability into its value chains by 2030 and achieve climate neutrality by 2040. The speaker went on to introduce some products which will contribute to sustainability. For example, its liquid crystal windows with dynamic glazing maintains the benefit of natural light while producing energy saving by regulating light and temperature. In addition, its new green solvents offer its customers a greener and more cost-effective solution for the advanced cleaning needs of next generation semiconductors.

He went on to say that the company’s localisation of portions of its supply chain would make a significant contribution to reducing its carbon footprint by improving efficiency and reducing the need for transport. 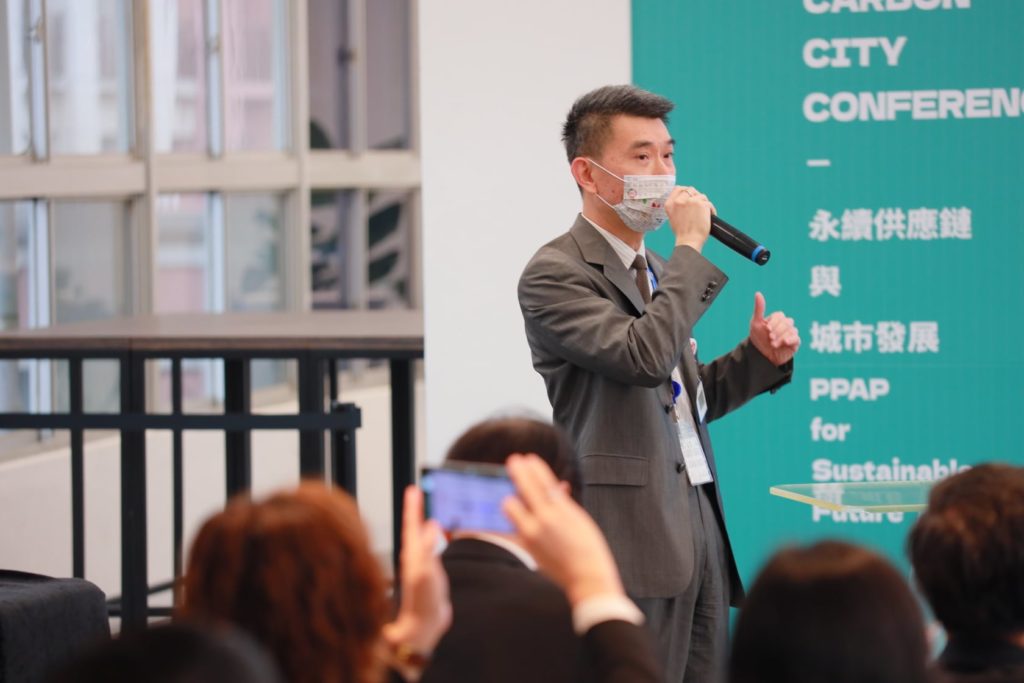 In his presentation, Michael Li, Vice President of Air Liquide (亞東氣體副總經理 李偉精) outlined how Air Liquide plans to reach net zero by 2050 through a combination of measures. Decarbonising its so-called scope 1 (direct emissions) assets will be done by capturing CO2, using renewable feedstock and electrolysis to produce low carbon hydrogen. Reducing its scope 2 (indirect emissions) will be done by improving the energy efficiency of its plants both to consume less energy overall and replace energy derived from fossil fuels with energy from renewable sources. 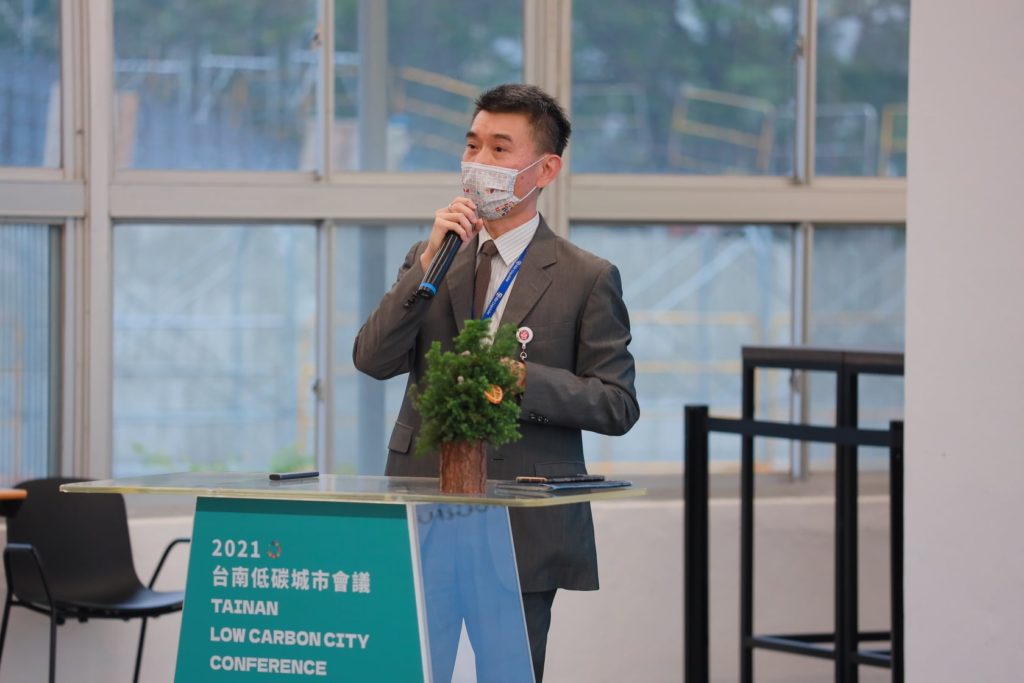 The advantages of hydrogen are already well known, and Air Liquide is active in the development of the hydrogen economy through various initiatives and associations. The company has teamed up with Siemens Energy to develop and large-scale electrolyser partnership for sustainable hydrogen production and is already working on its first electrolyser to produce green hydrogen and has plans for two more in Hsinchu, and three in Tainan. 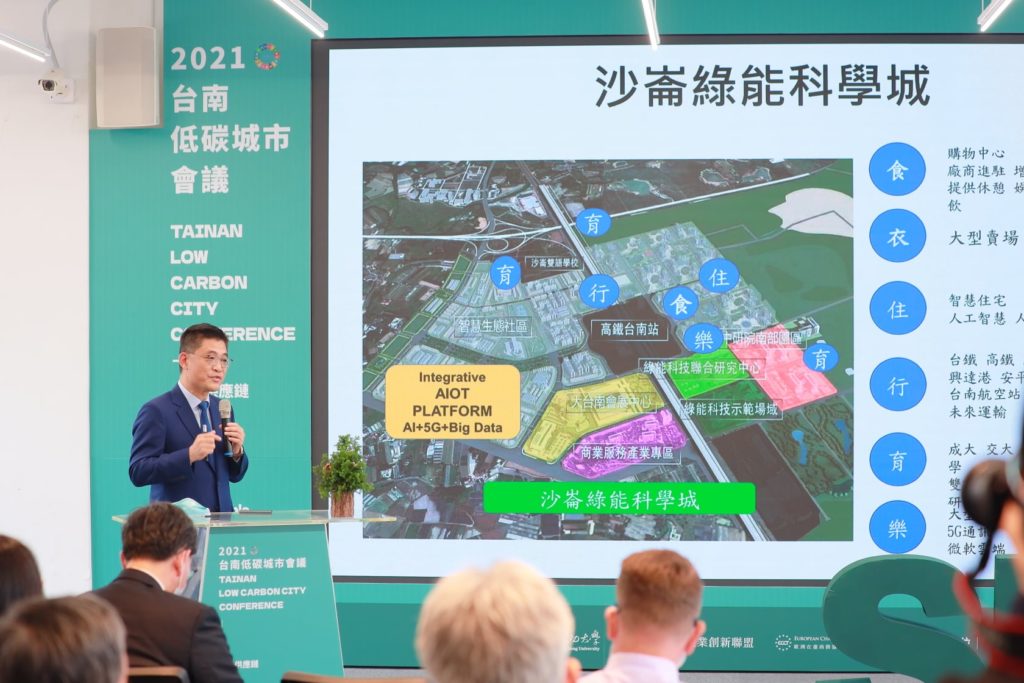 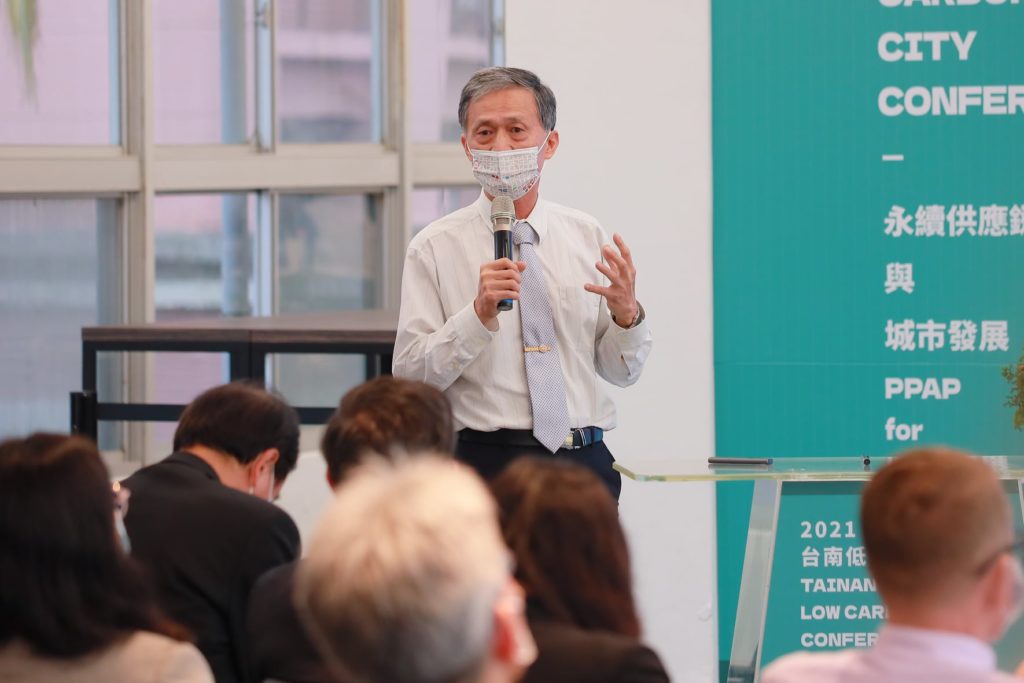 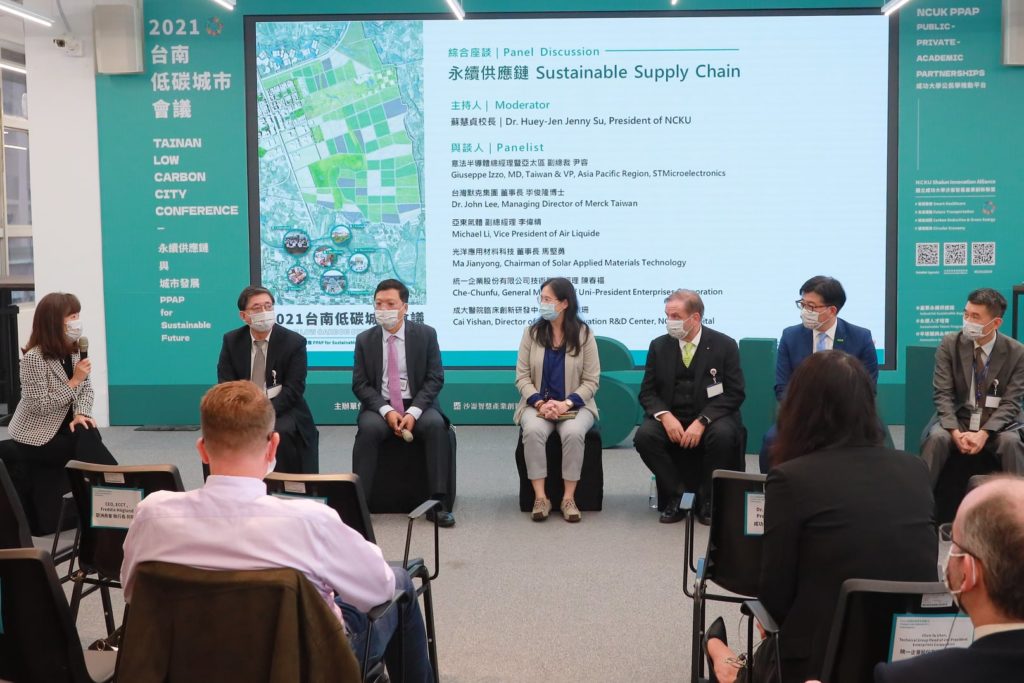 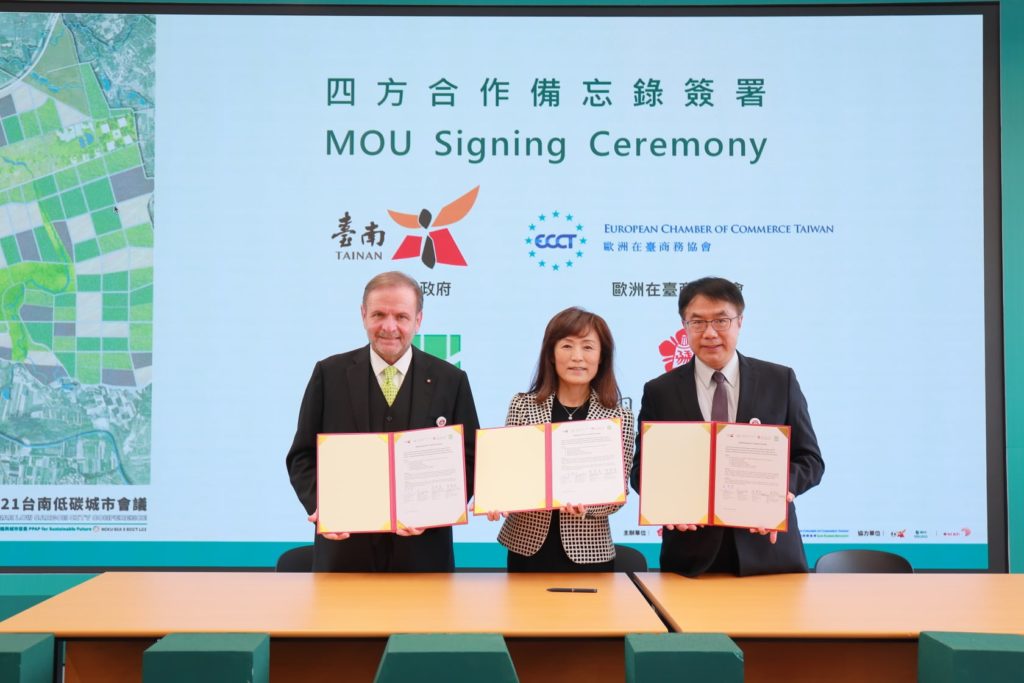 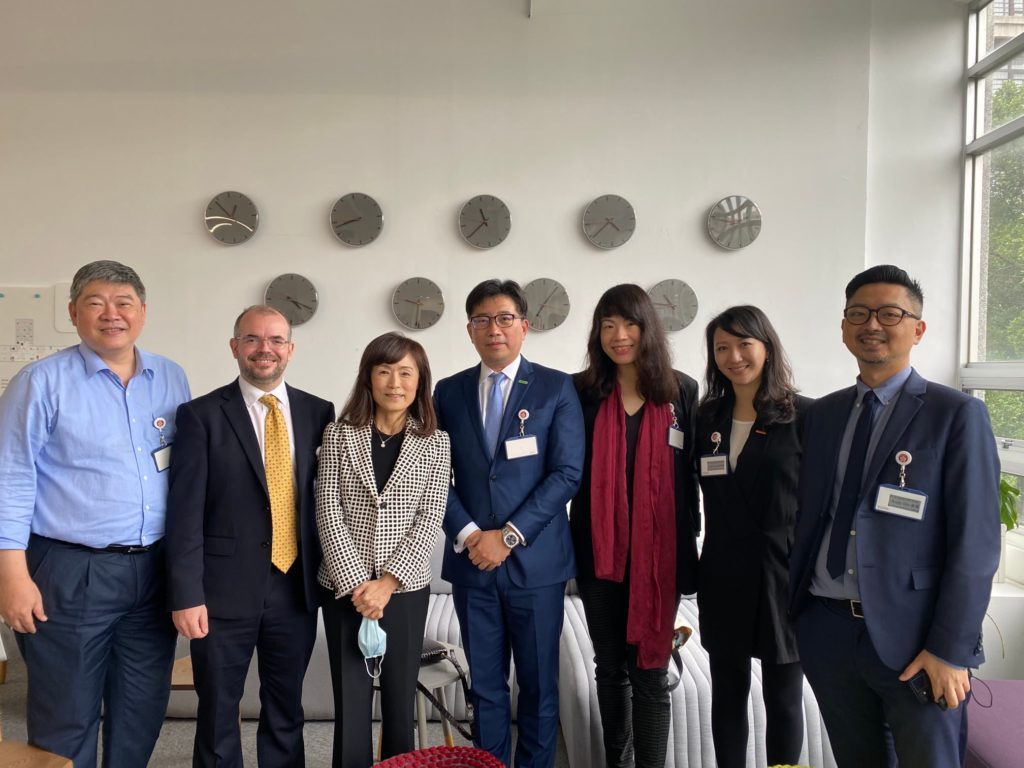