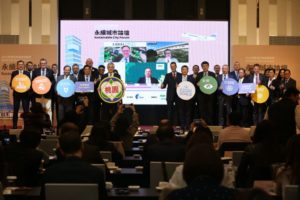 Photo Gallery: Facebook
-
Smart City Summit & Expo (SCSE) has been held annually since 2017. This year's theme was sustainable recovery. The event was organized by the Taoyuan City Government, the International Climate Development Institution, and co-organized by the ECCT’s Low Carbon Initiative (LCI) and ICLEI Local Governments for Sustainability.

The event brought together global leaders and experts to share smart solutions in renewable energy, energy efficiency, green finance, the circular economy, eco-mobility, and eco-logistics. It began with opening remarks by the guests of honor, followed by two sessions on the topics of “Green transition & renewable energy” and “Eco-mobility & eco-logistics”. The forum was followed by a VIP dinner which served as the launch of Global Smart Solution Report 2021: Eco-Mobility & Eco-Logistics, which was compiled by the Taoyuan City Government together with the LCI, the International Climate Development Institute (ICDI), and ICLEI and included chapters on solutions from ECCT LCI member companies: Air Liquide, Carrefour, Covestro, and IKEA. 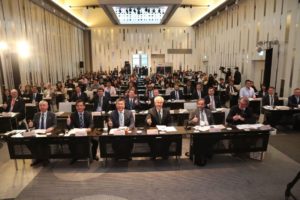 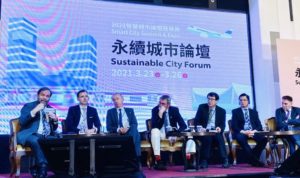 The first session included representatives from the public and private sectors to share their experiences in promoting cleaner and greener urban development. It was moderated by Dr. Lin Tze-luen, President of ICDI. Giuseppe Izzo, ECCT Vice Chairman, and LCI Steering committee introduced the ECCT and the LCI and went on to introduce the Global Smart Solution Report 2021: Eco-Mobility & Eco-Logistics, highlighting the contributions made by Air Liquide, Carrefour, Covestro, and IKEA. Later at the Taoyuan Night VIP Dinner the Mayor of Taoyuan presented awards to each company for innovating and enacting eco-friendly practices. 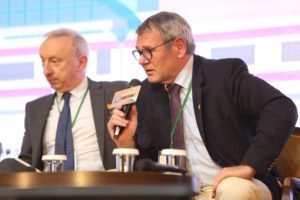 Dr. Thomas Prinz, Director-General of German Trade Institute Taipei gave an introduction to Germany’s transition plans. Renewables already constitute 45% of the energy mix in Germany but this has been achieved at a high price (Germany’s electricity price is higher than most other countries). He noted that a lot of energy is wasted in Taiwan because the electricity price is too low and that higher prices could act as an incentive to encourage a switch from fossil fuels to renewable sources. It is also important to set a price for carbon that is gradually rising to encourage the reduction of energy usage. He made the point that Taiwan is a perfect location for electric vehicles. Gogoro has shown that it is possible to roll out a nationwide battery charging network. However, Taiwan has also done very little to insulate buildings to reduce energy use. He said that the problem with nuclear fission is that no one wants to have the waste in their backyard. In this respect, Taiwan and Germany face a similar public opposition to nuclear power. There are a lot of solutions for renewable storage, including green hydrogen. He made the point that Germany has many lessons to share with Taiwan on how to overcome opposition in a democratic society and simplify EIA and other administrative processes in order to speed up the rollout of renewable energy. 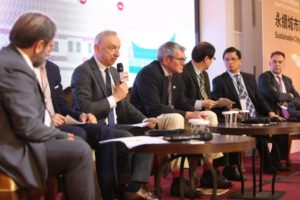 Jean-Francois Casabonne-Masonnave, Director of the French Office in Taipei

Jean-Francois Casabonne-Masonnave, Director of the French Office in Taipei introduced government and private initiatives, including the financing of innovative start-ups and green projects, green designs in social housing, and other ways France is working to become carbon neutral by 2050. He noted that the Covid-19 economic recovery plan includes funds to help companies to become more sustainable and retrofitting buildings and infrastructure for transport. France currently derives about 70% of its electricity from nuclear power but this should be cut to 50% in the near future as all coal-fired power plants are scheduled to be closed down by 2022 and the government has a target to increase renewables to 33% of the energy mix in 2030 and 40% of electricity. He noted that France is home to many dynamic companies involved in various aspects of the energy transition ranging from energy management to renewable energy, and green hydrogen (from electrolysis) while many banks are involved in green finance. He stressed that for the energy transition to succeed, the whole population needs to be part of it. 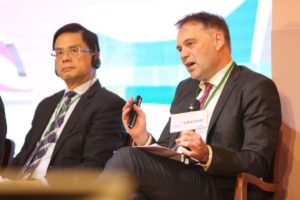 Dr. Thomas Jurgensen, Deputy Head of Office, European Economic and Trade Office, spoke about the EU’s Green Deal and Strategies. Europe has set a goal to be the first continent to be carbon neutral and just raised its goals for 2030. It is up to stakeholders to meet the targets through new innovations. The European Green Deal includes key initiatives and sees no contradiction between achieving growth and cutting emissions. The cost of inaction may be higher than action and the energy transition is being made much cheaper by the falling costs of renewables. The EU will provide funding for the energy transition, but the bulk of investments will need to come from the private sector. An important part of the energy transition is to make sure no one is left behind, which is why the EU has a strong focus on finding new jobs and opportunities for people and industries that need to be phased out. Funds from the Green Deal will help with this. On the offshore renewable energy strategy, some member states have good locations while others are big consumers. Good connections are needed to distribute the energy, which is why investments will be needed in infrastructure. This would also create jobs. In the area of electrification, the EU is working as a facilitator, by, for example, creating a battery alliance. He reiterated the point raised by Dr. Prinz on the lack of energy-saving features in buildings in Taiwan.t 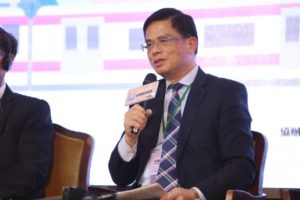 The second session focused on how to implement and strengthen cooperation between local governments and the private sector on green mobility and green logistics. It was introduced by Chiu Junn-ming, Deputy Secretary-General of Taoyuan, and moderated by Chao Kung-Yueh (Camyale), Executive Director of ICDI.

Dr. Lu Li-the, Director-General of the Department of Environmental Protection of the Taoyuan City Government, gave an introduction to Taoyuan’s logistics environment and new initiatives such as the Daxi eco-logistics site. Taoyuan is home to 32 industrial parks and home to 80% of Taiwan’s logistics centers, which total 1,600. In 2019 Taoyuan became chair of the ICLEI’s eco-logistics community. The important task is to recruit more members to the community. The city currently has 5 demo eco-logistics sites, focusing on increasing the efficiency of transport and fleets, reducing air pollution (as a large portion of PM2.5 pollution comes from the logistics industry) minimizing packaging, and introducing other circular economy concepts. The Daxi eco-logistics demo site used to be a port and still has old buildings which attract a lot of tourists. It focuses on the last mile of shipping. An important consideration is keeping the last mile both quiet and low carbon, which is why electric vehicles are used.

Eddy Chen, Head of Sales, Taiwan & ASEAN, TPU, Covestro Taiwan, talked about what his company is doing. He said the company’s thermoplastic polyurethane (TPU) production site in Changhua is the largest of its kind in Asia. It also produces biobased TPU which reduces petrochemicals in the production process. He went on to introduce Air Foam, which is producing airless tires using advanced particle foam material technology from Covestro. Using this solution solves the problems of traditional air-filled tires since there is no need for inner tubes and no need to repair punctures. This makes it ideal for bike-sharing since the problem of punctures results in considerable downtime for bicycles and maintenance costs. The Air Foam material is soft, bounces back very quickly, and is very durable making it more comfortable for many riders. The material is very elastic and the outer layer is TPU which is 100% recyclable, which will help Covestro to become fully circular in the future. 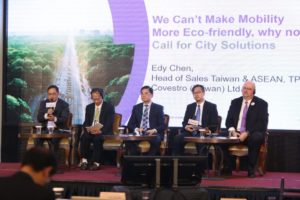 Mohamed Abdel-Aal, Director of Digital Experience & Innovation, KAUST in Saudi Arabia (via video conference) said that KAUST is a living lab which he defined as a place where trials can be conducted and focus on user experience. It is located on the Red Sea and is also a small city, which makes it easy to conduct a range of experiments. Future plans include solutions for smart traffic, smart homes, including smart metering, appliances, energy monitoring, greenery and water conservation, geothermal air-cooling experiments, solar panels, drone receiving systems, EV charging, and thermostats. Sudarmanto Budi Nugroho, Research Manager of IGES (via video conference) talked about how to turn research into practical projects, especially related to eco-mobility solutions in Indonesia. He noted that investment in green spaces encouraged people to walk rather than use vehicles while better awareness of road safety encouraged people to use buses. He also cited research showing the potential emission reductions from the transition to electric buses based on the first trials of electric buses. Josephine Allan, Director of Integrated Marketing & Sales for BIXI (via video conference from Montreal) introduced BIXI Montréal, a public bicycle sharing system serving Montréal, Quebec, Canada. Launched in May 2009 by Public Bike System Company, it is North America’s first large-scale bike-sharing system. She noted that Montreal is in the top 20 of most congested cities and the bike-sharing system was introduced with the aim of reducing the use of cars in favor of cycling. 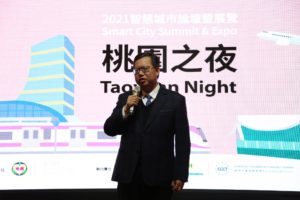 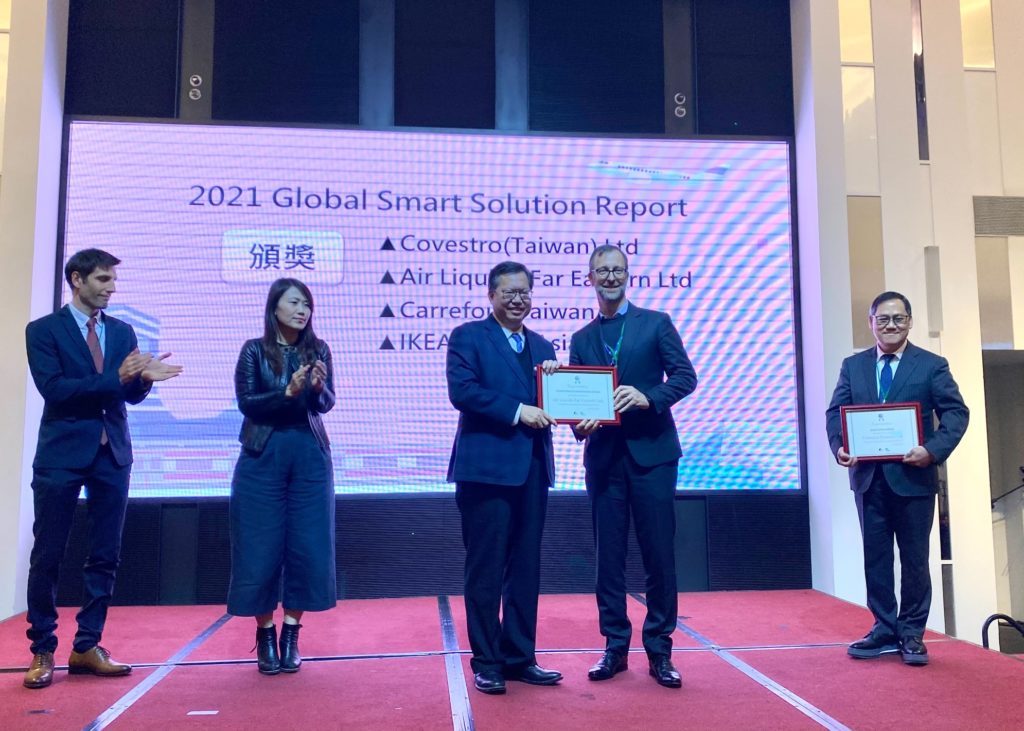 Air Liquide is working on solutions for hydrogen, which could be an optimal solution to address the intermittent nature of renewable energy sources by converting the excess electricity produced during windy or sunny weather into hydrogen. Air Liquide hopes to help Taoyuan transform into an eco-logistics-centered society where hydrogen and the recycled CO2 from hydrogen production can be used in a wide range of applications: hydrogen mobility/fuel cell vehicles (already adopted by Japan, Korea, and China), silent cryogenic refrigerated vehicles, and replacement of liquid natural gas, and as a long-term energy storage medium. These approaches will contribute to helping Taoyuan City reduce CO2 emissions and build the eco-Logistics pilot model for other cities to follow. 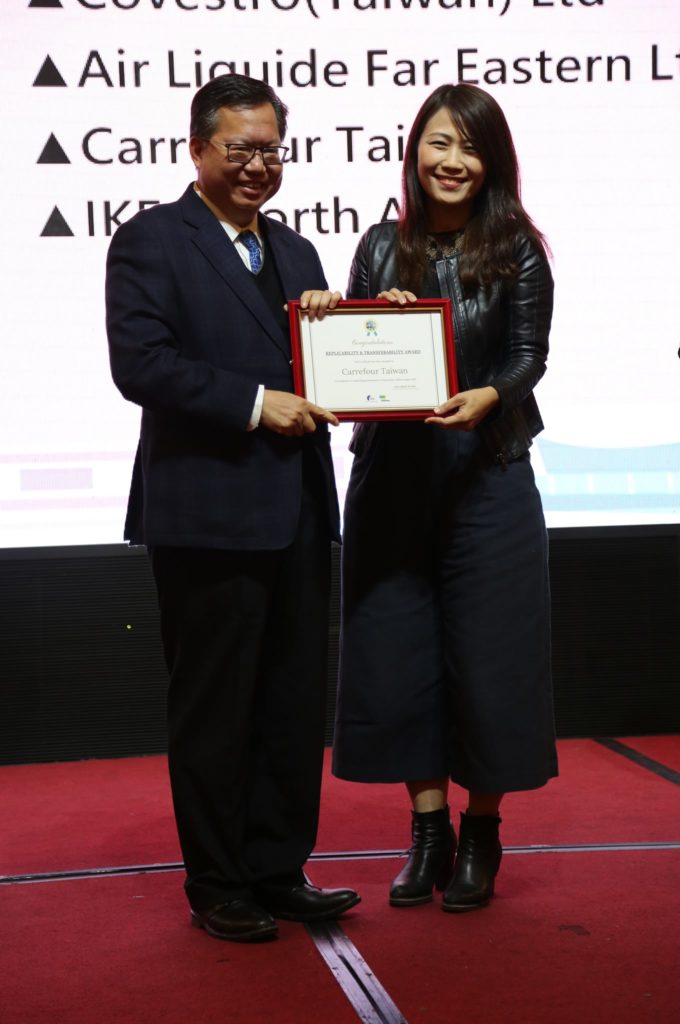 To support the Taoyuan City government's ambition of building a sustainable, low carbon airport city, Carrefour has embarked on a green warehouse project in Yangmei by taking ecological logistics, low carbon transport, and sustainability into consideration. Solar panels and rainwater harvesting systems are also installed to materialize the concept of green energy. In addition to advocating for plastic/carbon reduction and energy conservation, Carrefour has introduced energy-saving equipment and measures such as a smart coolant water purification system, advanced cooling, and lighting systems, heat-shielding windows, and auto-start/stop systems installed on escalators. 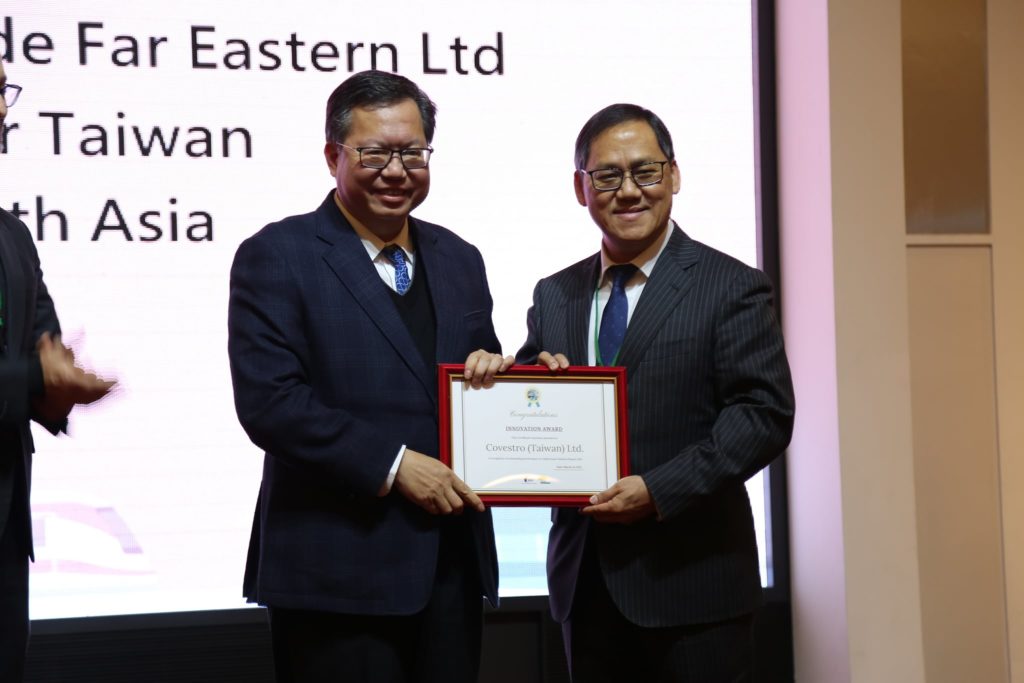 An innovative material developed by Covestro has been used to develop an Air Foam tire that has been successfully introduced in the Netherlands and Belgium and is used by local bike-share providers in Amsterdam and Brussels. The Air Foam system provides bike-share operators with full fleet reliability and, much lower operational costs. The system greatly helps cyclists solve their flat tire issues, letting them enjoy worry-free cycling. In addition, when the Air Foam system reaches the end of its service life, share fleets and bicycle shops can collect all used inserts. Air Foam will then arrange collection and recycling in order to complete the closed-loop recycling of the inserts back into their original raw material. 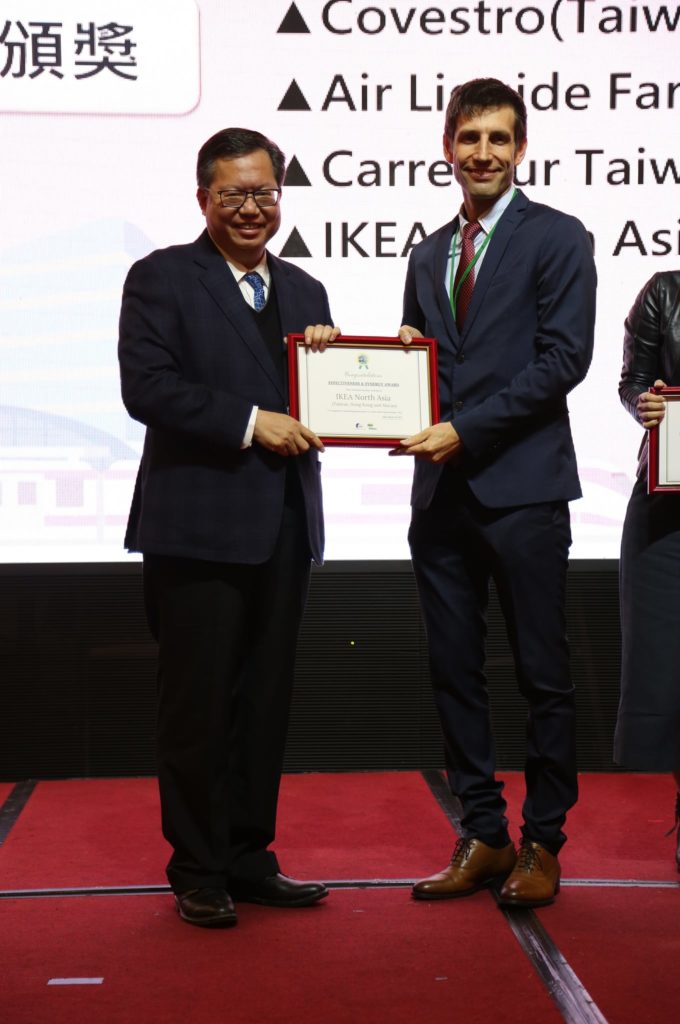 IKEA has an ongoing mission to reduce the environmental impact of the production of goods and services. Given that products have to be shipped from suppliers to distribution centers and then to customers, the company is also looking for new ways to innovate and reduce CO2 emissions of its logistics operations by working directly with suppliers, governments, and other partners. IKEA is investing in ways to reduce the emissions of all aspects of shipping, by sea and land. Overall, the goal is to reduce emissions by 70% per shipment by 2030. 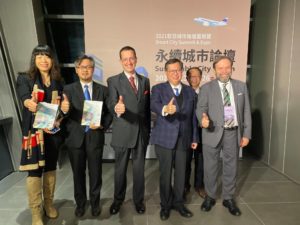 The event was concluded by remarks from Chiu Junn-ming, who reiterated that Taoyuan will be implementing many of the products and technologies discussed at the forum to improve eco-mobility and eco-logistics all over Taoyuan.