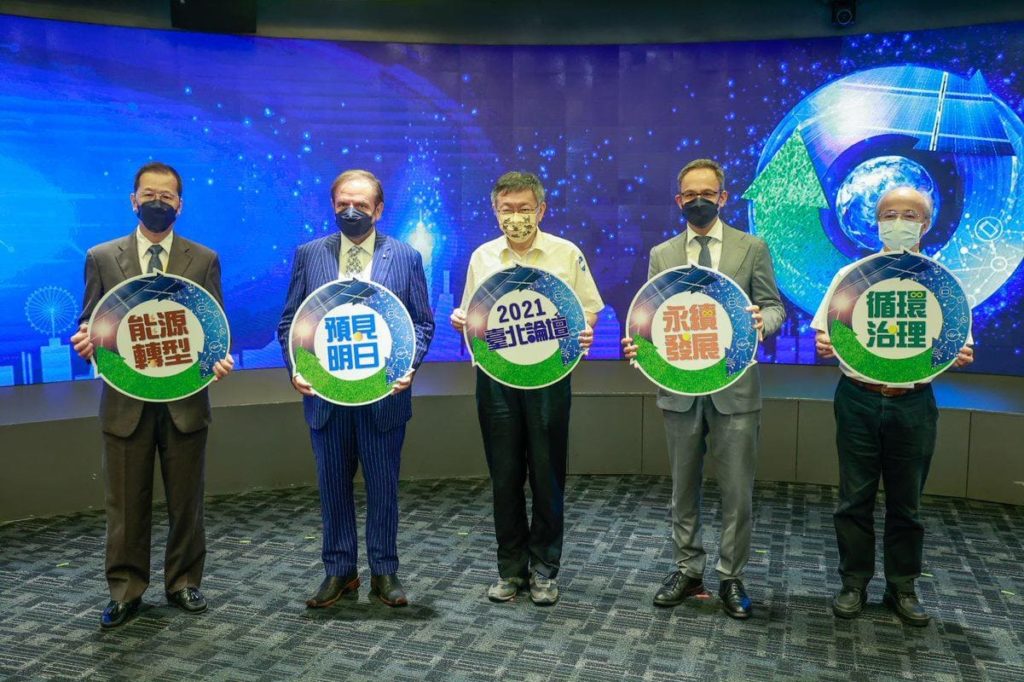 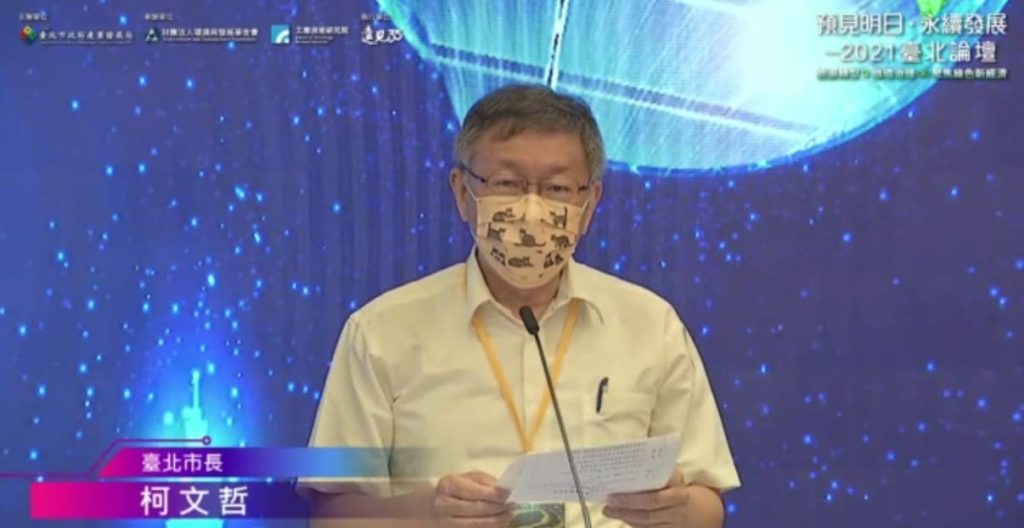 -
Session 1
The theme of the first session was “Energy transition toward a zero-carbon city - The beginning of a nationwide low energy consumption movement”.

Guido Tielman, Representative of The Netherlands Office Taipei, gave a presentation on his country’s efforts to achieve a completely circular economy by 2050. He noted that 2021 has been a bad year for climate change, showing how tackling climate change is the greatest challenge facing humankind. The Paris Agreement provides a blueprint for taking action and policies are continuing to be adjusted through measures such as the EU’s carbon border tax adjustment mechanism. However, there is a long way to go to reach circularity, but we have accumulated a lot of experience as to what works and what does not. The Netherlands has supported thousands of circular economy business models and ranks among the five best countries in terms of circularity. The country is cooperating with national authorities and the Taipei City Government to promote circular economy best practices. He cited several ideas from the Netherlands that have been adopted in Taiwan including green building concepts for a housing project in Nankang and a facility owned by Taisugar.

Giuseppe Izzo gave a presentation on the topic “Taiwan’s Energy Transformation Path to Net Zero by 2050” in which he highlighted the ECCT’s Taiwan Energy Transformation (TET) policy proposals. He stressed that to fulfill its commitment in line with the Paris Agreement and to reach net-zero by 2050, Taiwan needs to draft and implement a comprehensive roadmap for energy transformation in collaboration with all stakeholders, including the full range of industries operating in Taiwan, to limit global warming, restore the environment and boost the economy and prosperity.
- 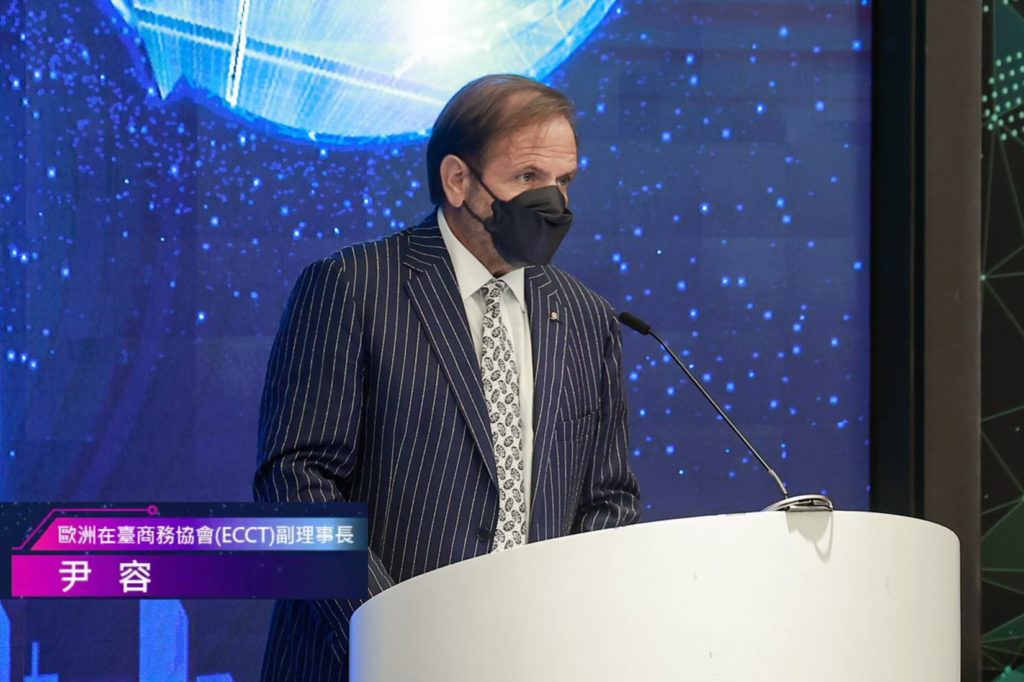 -
He went on to outline and summarise the TET domain’s four main areas of focus: Grid &amp; energy storage infrastructure developments: Physical storage, as well as storage infrastructures, are needed to strengthen the grid and allow decentralized management of local production and balance out the fluctuations in renewable energy sources Decarbonization roadmap, by sector: Taiwan should draw up a clear roadmap for net-zero with much more ambitious annual targets for each sector. In particular, as the major source of carbon dioxide (CO2) emissions, the power sector needs to reduce its current footprint of 35-40% of Taiwan emissions. The main tasks should include enhancing energy efficiency by setting an electricity price that reflects real costs and reducing the proportion of thermal power (currently around 82%) in generation by switching to renewable energy and by adopting interim solutions such as co-firing hydrogen/ammonia with coal/LNG. Financing &amp; mechanisms to enable the energy transformation roadmap: The government should encourage the financial industry and government-related units to facilitate investments for all aspects of sustainable development. In addition to promoting renewable power purchase agreement (CPPA) to industries, the government should set a CO2 price or tax to ensure that polluters pay the true cost of their impacts and fully account for the value of climate-related risks and opportunities. Climate law: Taiwan’s roadmap to net-zero by 2050 should not be merely an ambition, as stated in the EPA’s draft “Climate Change and Response Act” but should rather be a mandatory requirement enshrined in the act or other climate legislation. Taiwan’s goals should be aligned with the UN’s Intergovernmental Panel on Climate Change (IPCC) and be reviewed at least every five years to see if adjustments are needed in line with IPCC developments.
- 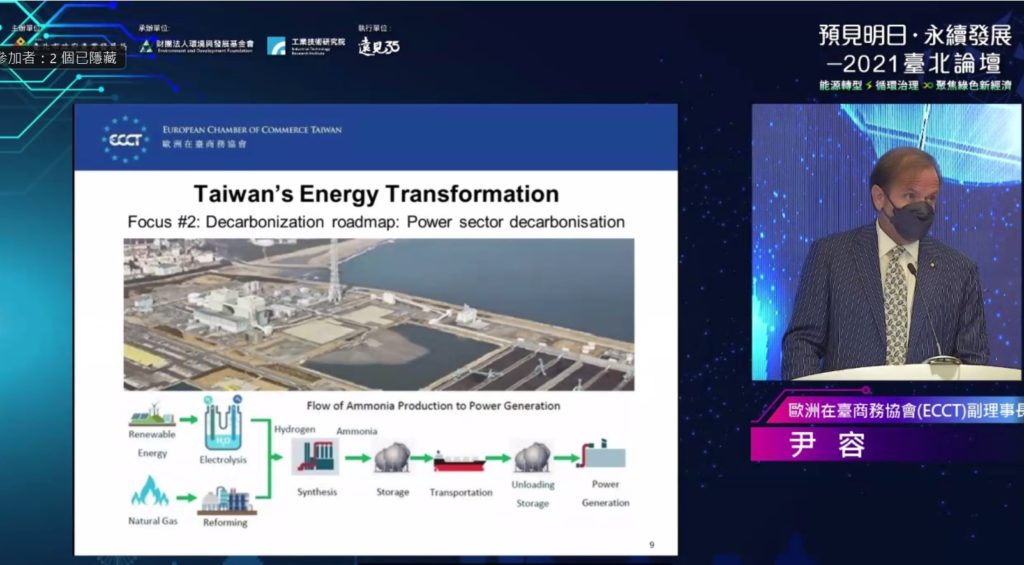 The speaker went on to share some examples of best practices of ECCT companies engaged in the green transition and renewable energy.

Jiang Wen-xing, General Manager of Delta Building Automation from the Delta Group, gave a presentation on the topic "Low carbon housing and transportation for a greener footprint: Marching toward a zero-carbon city".

After the presentations, a panel discussion was held which featured the presenters as well as James Hung, Head of Field Service of Schneider Electric Taiwan. In his remarks, Hung recommended that the government and industry foster green energy development by advancing system design, planning, and operation of an IoT-enabled smart electric grid so as to integrate variable renewable energy into the grid. This would help Taiwan to reach its 20% renewable energy target by 2025.
- 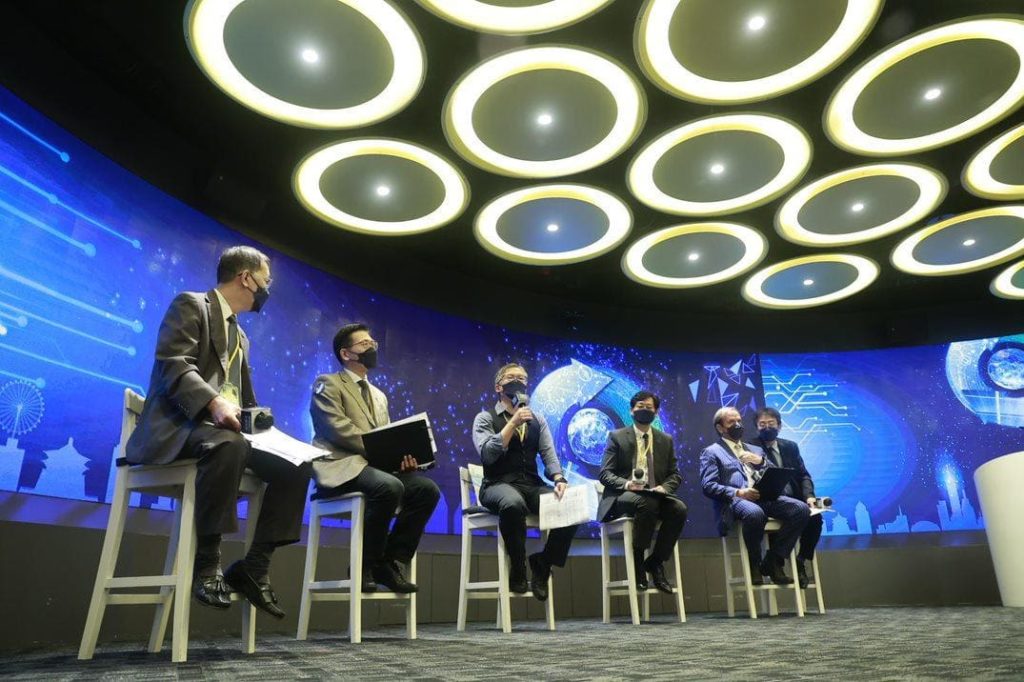 Session 2
The theme of Session 2 was “Next level of business sustainability: Supporting circular economy practices”.

Li Jong-peir, President of Taiwan Cement gave a presentation on the topic "From carbon reduction to energy storage - A traditional company reinvented as a world-class circular business".

Kirk Hwang, Chairman of Yuen Foong Yu Group gave a presentation on the topic "Building a circular economy on advantages of a carbon fixation business". 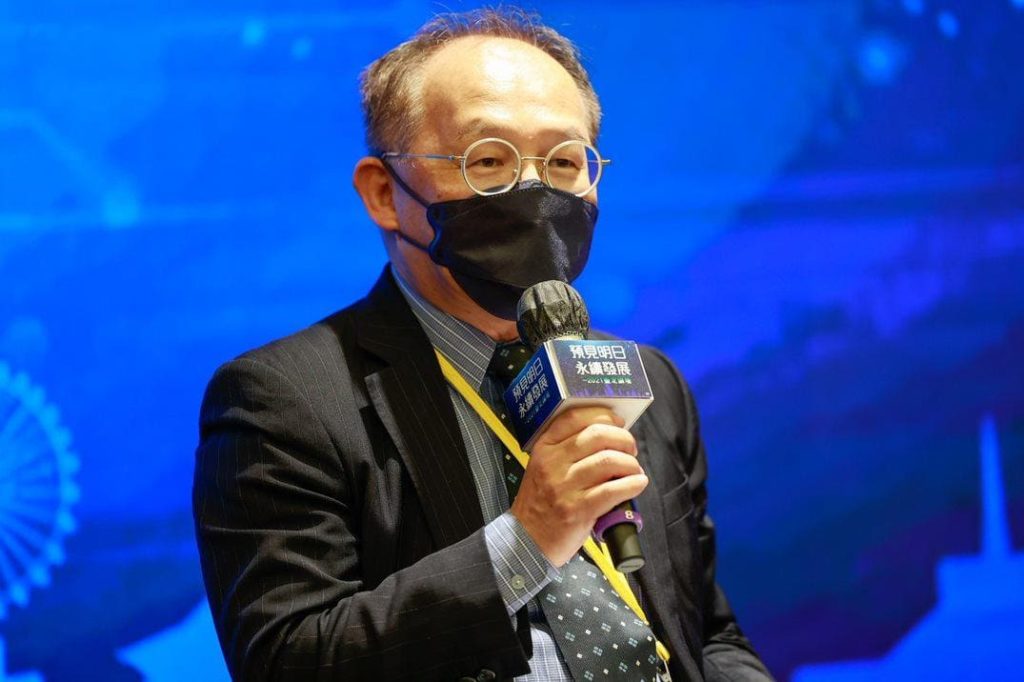 Liu Jing-jing, Chief Sustainability Officer of Acer spoke on the topic "Recycling and recovery - The way to corporate sustainability".

Marilyn Su, CEO of the Carrefour Foundation gave a presentation on the topic "Green life innovations by creating a sustainable value chain in the food industry&quot". In her presentation, she spoke about Carrefour Taiwan’s efforts to build up inclusive sustainable systems and how it is leading some initiatives which allow different stakeholders to participate and thereby amplify the impact. The most visible results can be seen in its food bank systems, “animal welfare revolution” and Carrefour impact store. Today, the company is calling for more suppliers to participate by signing food transition pacts to accelerate the actions.
- 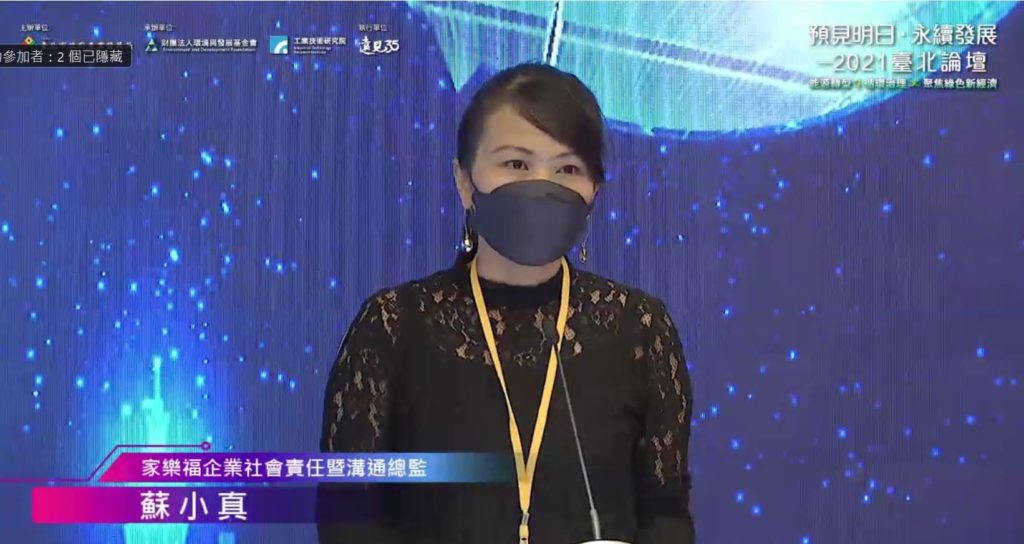 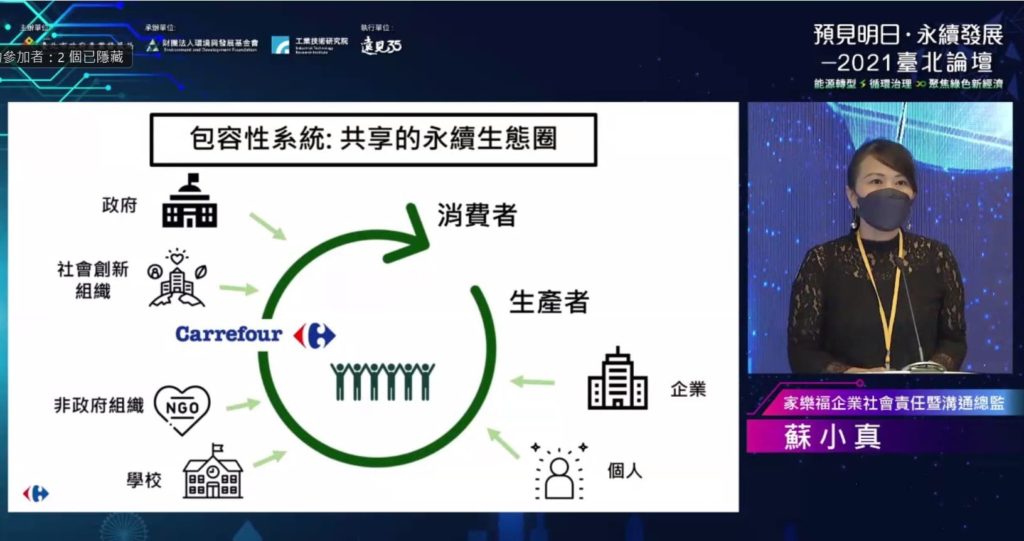 -
Matt Lu, Business Executive Officer Taiwan of Nestlé Nespresso SA joined the final panel session in which in shared his company’s capsule recycling program in Taiwan, which has the capability of recycling 100% of its coffee capsules and offers a free mailing service to its members. The capsule recycling service has so far successfully reached 2000+ recycling locations across Taiwan. To build a more sustainable global supply chain, Nestlé has joined hands with the Pur Project to support afforestation plans around the world. Since 2014, this joint cooperation has resulted in the planting of more than five million trees in coffee areas around the world, promising that every cup of coffee will be carbon-neutral by 2022.
- 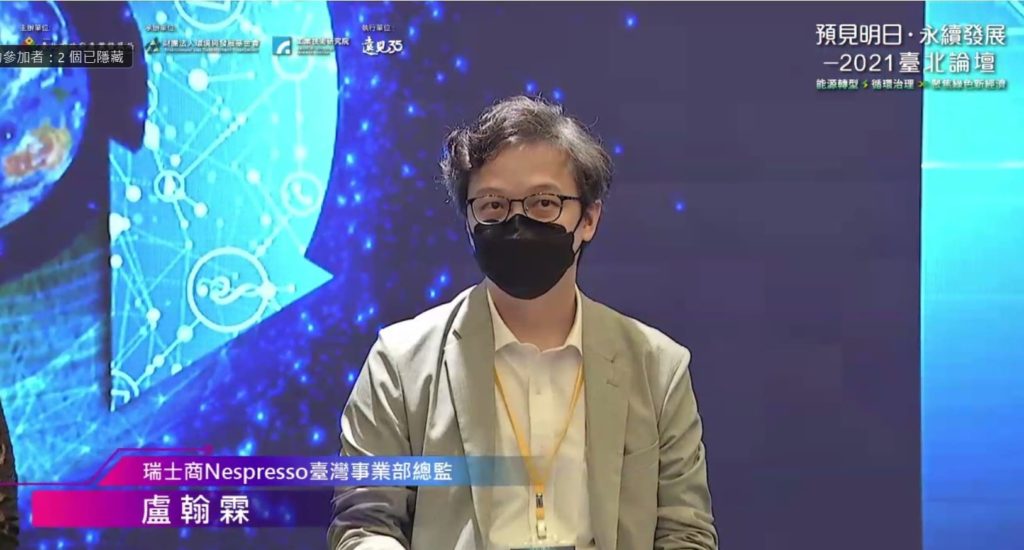 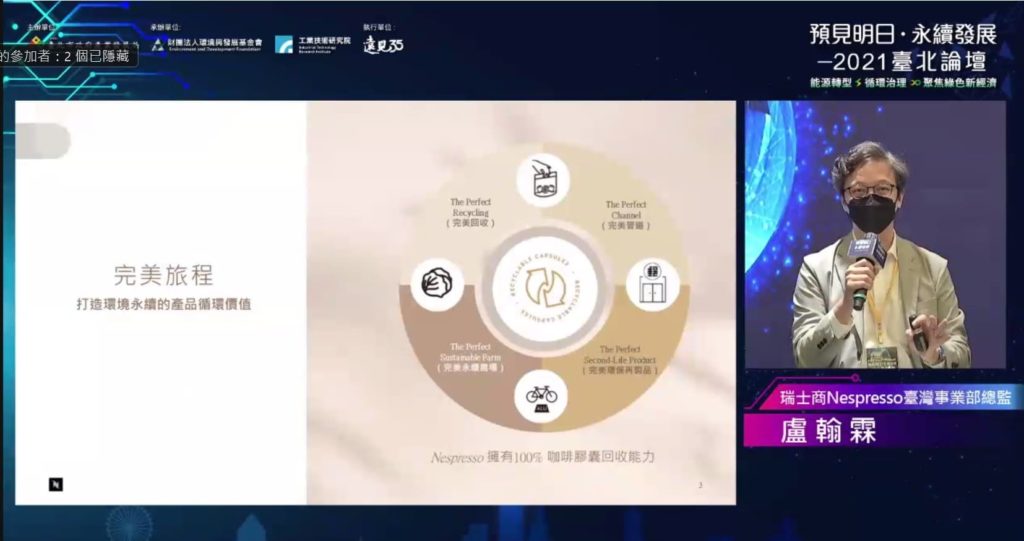 The Taipei Forum was concluded with a panel discussion moderated by Tony Mo, Secretary-General of BCSD Taiwan, which featured the presenters as well as Charles Hsueh, Senior Partner at HOY Architects & Associates, and Matt Lu, Business Executive Officer Taiwan of Nestlé Nespresso SA. 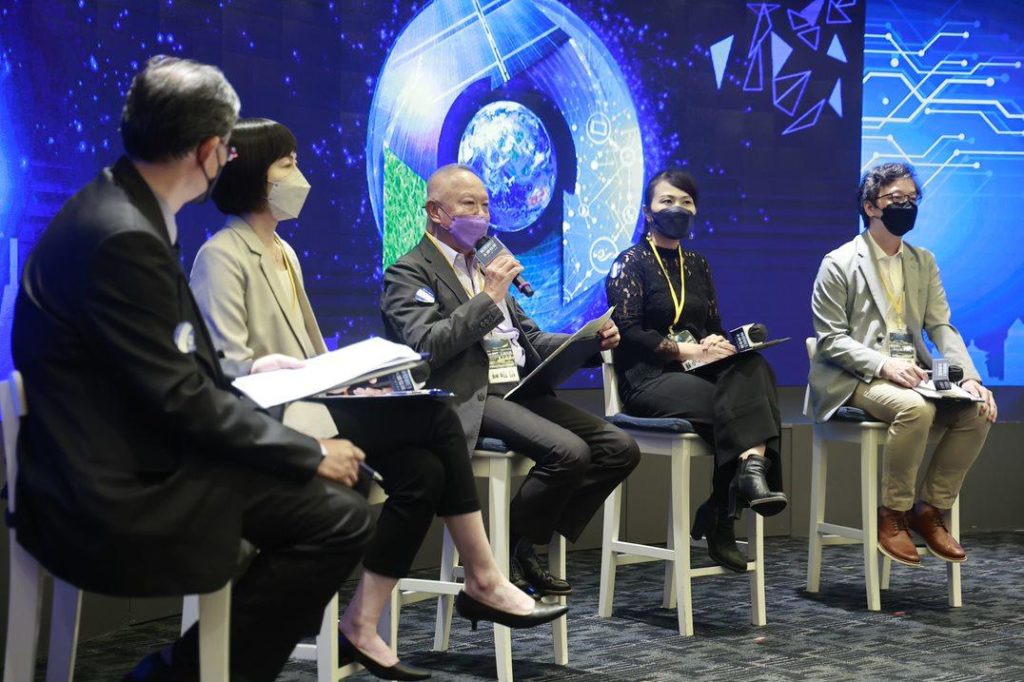