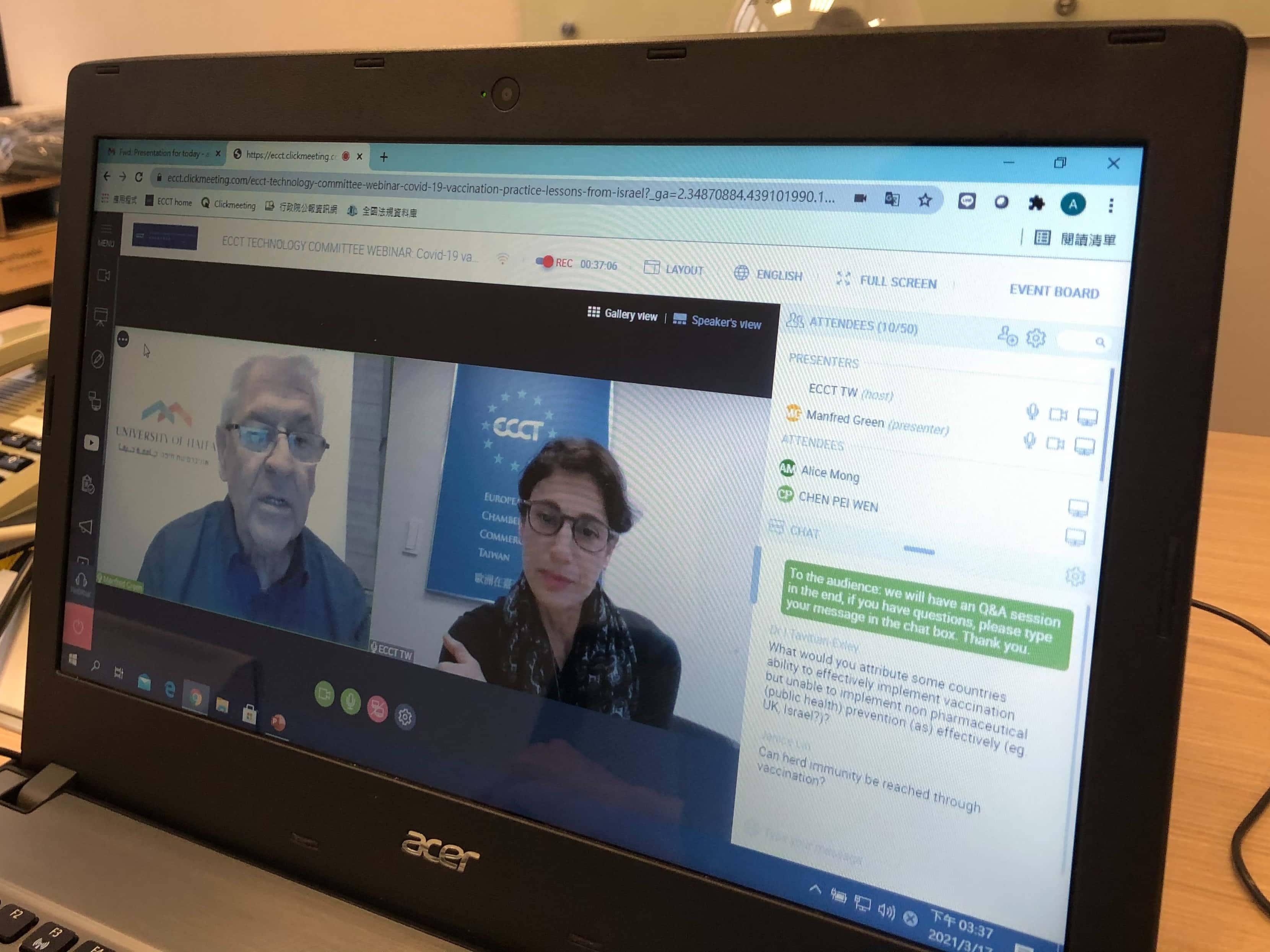 The ECCT's Technology committee hosted a webinar on the topic of “Covid-19 vaccination practice: Lessons from Israel” featuring guest speaker Dr Manfred Green, Professor of Public Health at the University of Haifa in Israel.

The speaker began with an overview of the coronavirus pandemic in Israel. The country has so far had about 800,000 cases and around 6,800 deaths. It was one of the first countries to start a vaccination programme (in December 2020), which has led to a steep drop in the number of daily cases to around 2,000. According to Green, 73% of adults have had at least one dose and 58% have already had two doses.

Israel is deploying the Pfizer-BioNTech mRNA vaccine. It was first administered to the over 60s. According to data so far, the vaccine has been more than 90% effective in preventing hospitalisation and 97% effective in preventing deaths, meaning that almost all Covid-19 deaths now are in people who have not been vaccinated, which are mostly young people since most of the older population have already been vaccinated.

Israel’s vaccine rollout has been successful mainly because the country was very proactive in signing contracts for vaccines even before they had been approved. Authorities had options on several vaccines, including Pfizer’s, which allowed them to get access to early production. The second reason for success is a well-organised healthcare system. Healthcare authorities have contact details of all citizens and sent personalised messages to every citizen on where to get their vaccinations. Another reason is Israel’s experience in security matters, which makes it very effective in dealing with emergencies. Military personnel were recruited to assist in the rollout process. While only citizens were initially eligible for vaccines, non-citizen residents are now also eligible.

According to Green, the impact on the general economy was large although not so much in Israel’s high-tech industry. The impact for small businesses was partially alleviated thanks to government subsidies.

On a question as to whether or not it is possible to eradicate the virus, Dr Green said that this would be much more difficult than with the original SARS virus since the SARS-CoV-2 virus causes a lot of asymptomatic cases and has spread rapidly and widely. Moreover, while the current vaccines have been shown to be fairly effective and those vaccinated are producing antibodies to fight mutations, it remains a question if the vaccines will be effective against all new variants of the virus. In addition, it is always difficult to eradicate viruses completely. Dr Green noted that smallpox is the only disease that has been completely eradicated while polio and rubella are close to eradication. However, measles which had also been close to eradication has seen recent spikes due to drops in immunisation.

Another issue that will not be known for a while is how long vaccines will last. There may be a need for booster shots or repeat vaccinations periodically.

The general public in Israel has by and large been willing to take the vaccine. However, there have been some holdouts in certain religious groups or from sceptics or people afraid of side effects. One worrying statistic, according to Green is that tens of thousands have not turned up to receive the second dose (which is required for the Pfizer vaccine), which means that they may not be adequately protected.

According to Green a high percentage of the world’s population (around 90%) needs to be vaccinated if we are to achieve herd immunity and overcome the crisis. If not, the virus will keep spreading and mutating. This is why it is crucial to get as many people vaccinated as soon as possible and rich countries need to help developing countries to get sufficient quantities of the vaccine.

On the question about the side-effects of the AstraZeneca, Green said that vaccines are remarkably safe and that the dangers have likely been exaggerated in the media.

He made the point that we need to plan better for the next pandemic, which will require international cooperation among governments and companies.

On a question about vaccine passports, Green believes it is a good idea although the introduction could lead to discrimination. Israel introduced its version of the vaccine passport on 21 February. It allows every citizen to download a vaccination certificate with a unique barcode. Introducing the passport could actually serve as an incentive for those reluctant to get vaccinated. Green noted that certain young people in Israel had initially expressed a reluctance to get vaccinated but when they discovered that getting vaccinated would allow them to get a vaccine passport, thereby giving them more freedom to travel, they have since changed their minds.

For the webinar recording, please refer to link.